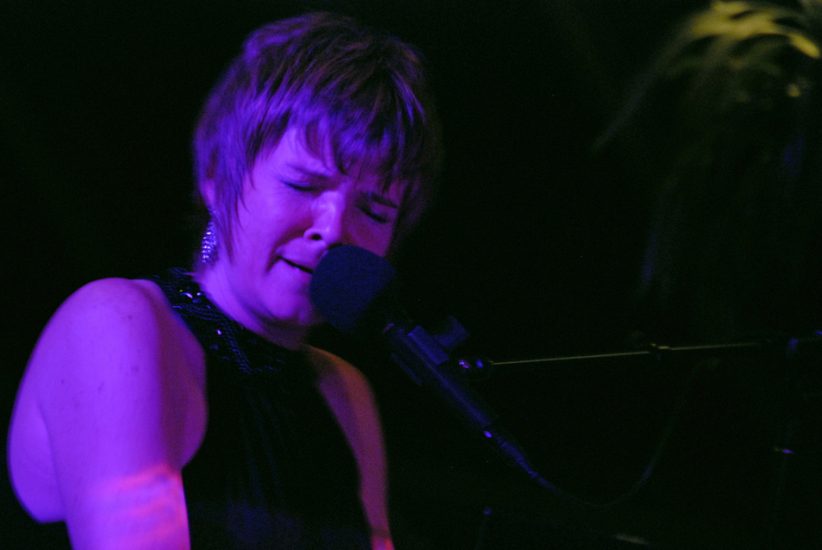 Karrin Allyson on The Jazz Cruise 2009 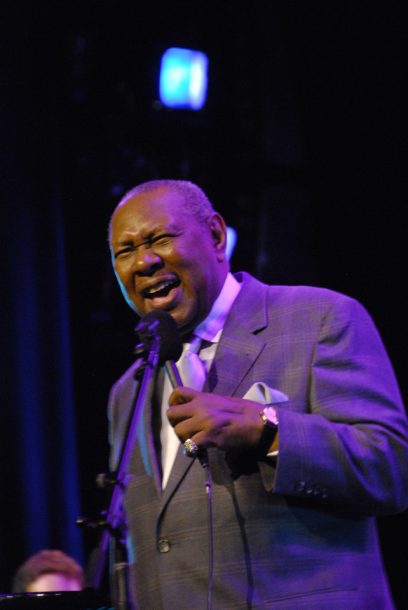 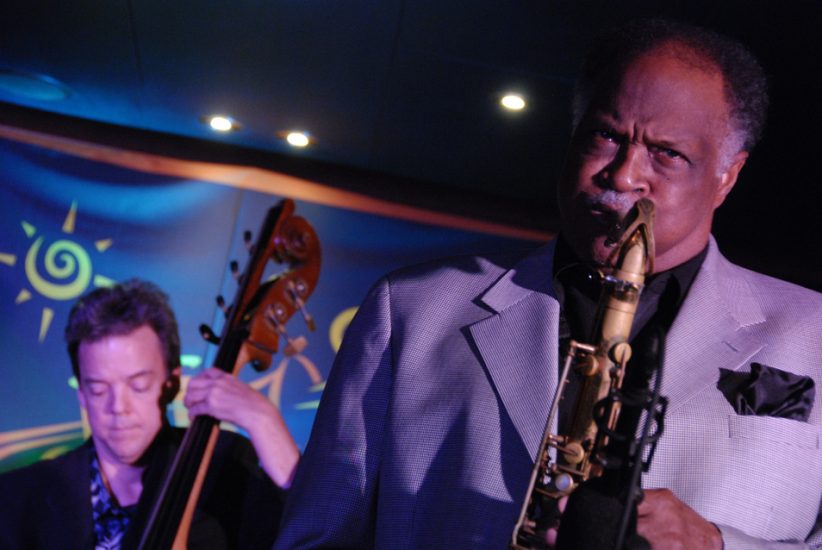 Jon Burr and Houston Person on The Jazz Cruise 2009 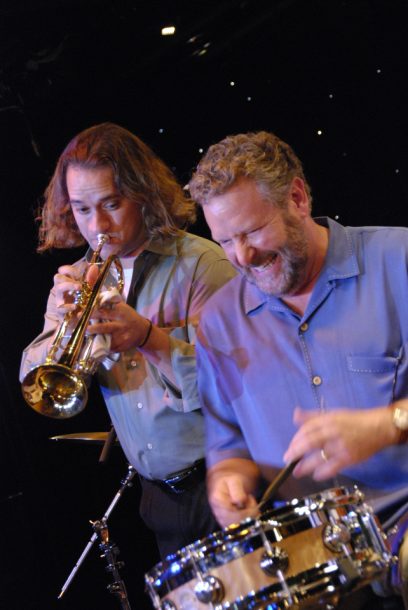 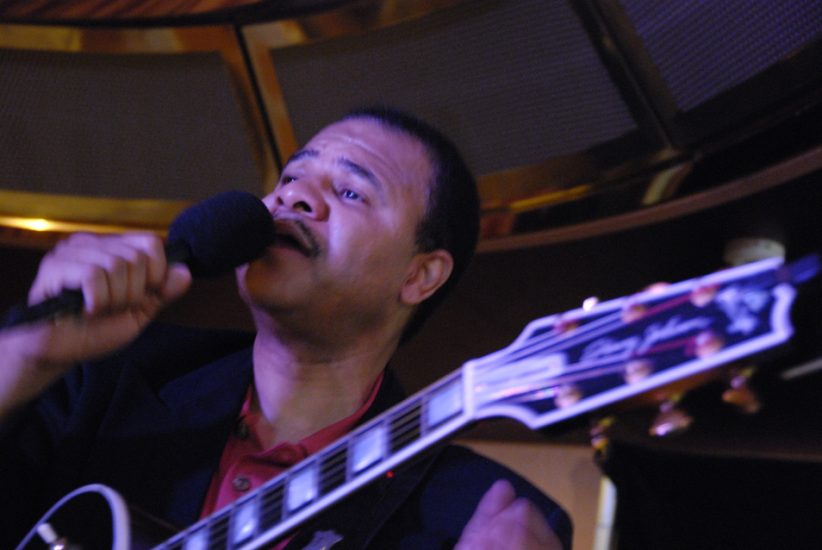 Henry Johnson on The Jazz Cruise 2009 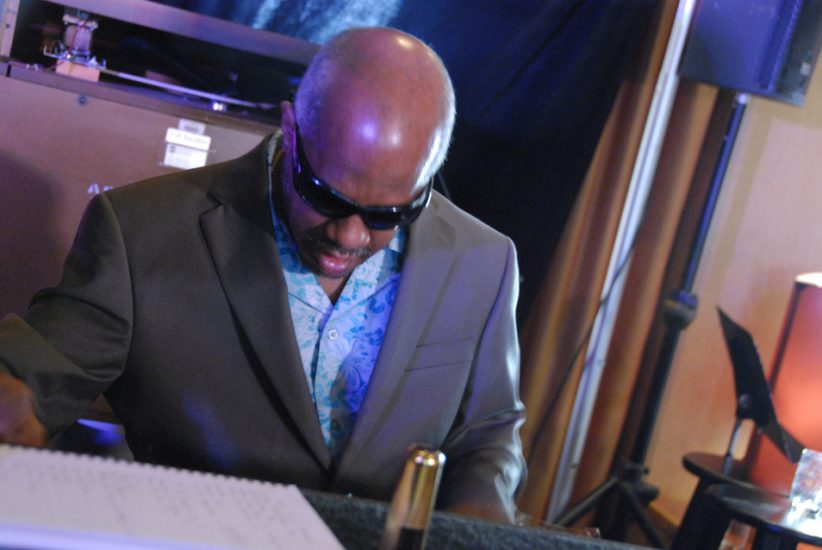 Chris Foreman on The Jazz Cruise 2009 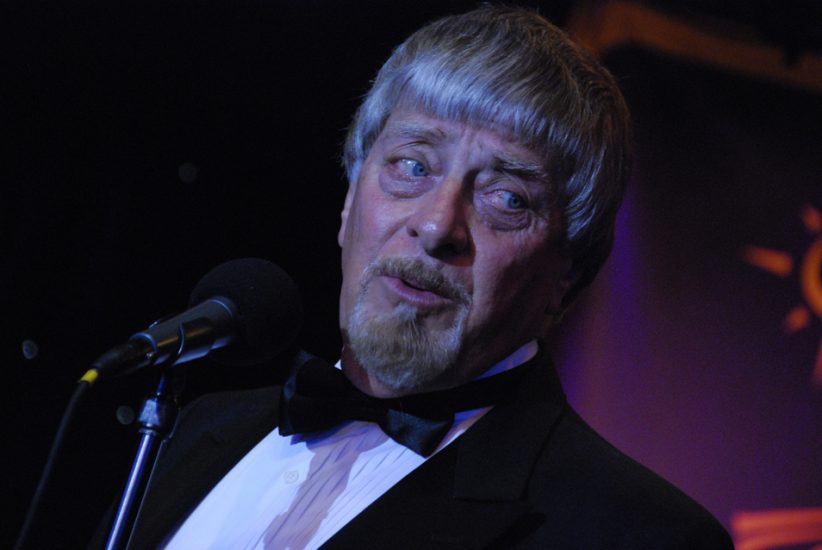 Pete Barbutti on The Jazz Cruise 2009 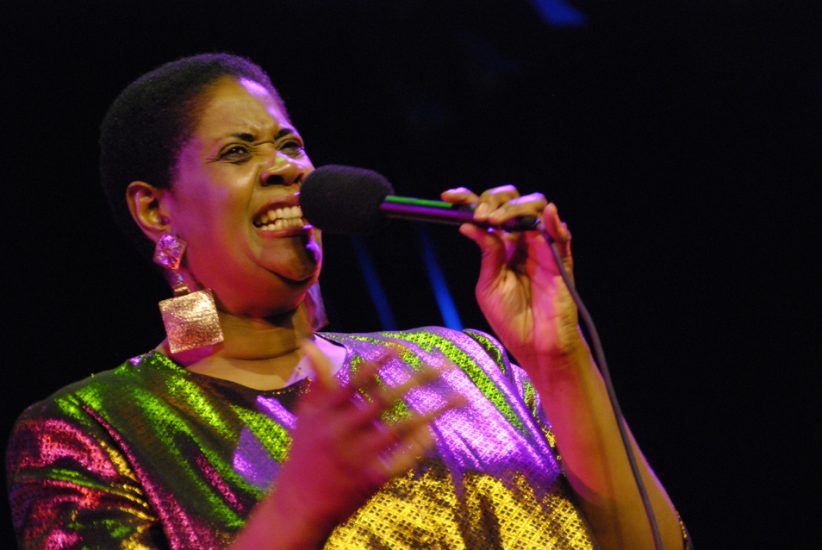 Denise Thimes on The Jazz Cruise 2009 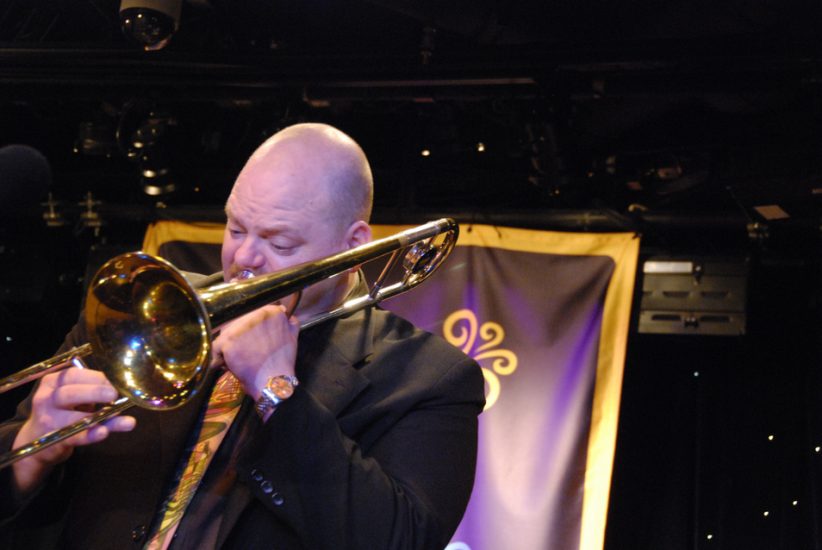 John Allred on The Jazz Cruise 2009 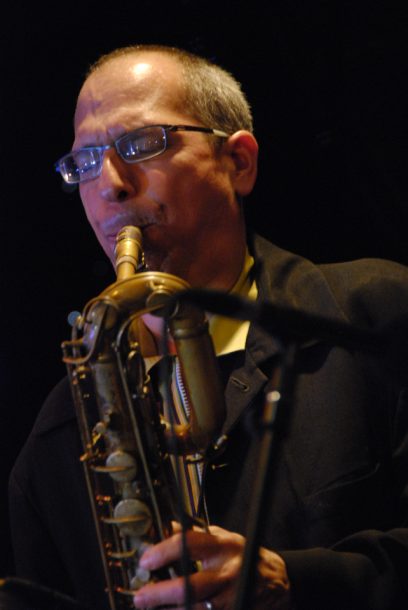 Gary Smulyan on The Jazz Cruise 2009

Late in the week, we were on the elevator, doing the long haul from the Queen’s Lounge on Deck 2 up to the Crow’s Nest on 10. The doors were about to close on Deck 3, when a guy heard a familiar sound from the Ocean Bar.

“Come on!” he cried excitedly, tugging his wife’s arm and rushing her off the elevator, “that’s Houston Person playing!”

Right there, you have the plenitude and the joy of the Jazz Cruise. All the good food that you can eat and more than all the great jazz artistry you can hear. With enough shipboard time – six afternoons and seven evenings of programming – for second and third helpings of your favorites.

As many as five venues are simultaneously swinging in the thick of the evening aboard Holland America’s Westerdam, a relative pixie among cruise liners with its 2000 passenger capacity. When the clock struck midnight on Tuesday evening, we could range along the Lower Promenade Deck between and the Jazz Cruise Big Band up front in the Vista Lounge and comedian Pete Barbutti at the Queen’s Lounge near the midship elevators. In between these headliners, Anita Rosamond was nestled in her nightly gig at the Piano Bar. One flight up the Tom Scott Quintet with Paulette McWilliams was afloat in the Ocean Bar, while the Karrin Allyson Quartet was perched up in the Crow’s Nest.

Navigation of the Jazz Cruise schedule was tricky, complicated by our three onshore Caribbean excursions and our dinnertime seating at the Vista Dining Room from 7:45 to 10:00pm – while the music played on elsewhere. So we opted for the first of Allyson’s two sets at 10:15 and zipped down the stairs for Barbutti. We’d seen Callaway at the Ocean Bar two nights earlier, and Scott was still slated for four more sets later in the week. It would have been possible to insert Rosamond on our itinerary, but my wife would likely have thrown me overboard if she’d been obliged to miss even an instant of Barbutti’s antics. He is the unrivaled Victor Borge of jazz, and we couldn’t risk missing an even more astoundingly hilarious phenomenon than his playing “Back Home Again in Indiana” on the piano with his nose – capped by a grace note. We were on this cruise, after all, to celebrate our 10th anniversary.

The food was definitely above average, according to the missus, our family’s cruise expert (this was my first). Acoustically, there wasn’t a single room among the four sampled venues that didn’t easily transcend the outdoor jazz festival experience, from the intimate jazz club feel of the 200-seat Ocean Bar up to the unique hybrid ambience of the 1000-seat Vista Lounge, combining elements of concert hall and posh nightclub.

A few popular Jazz Cruise traditions have taken hold in the programming since Anita E. Berry founded the first full-ship straight-ahead jazz sea voyage in 2001 (with the Smooth Jazz sailings following in its wake two years later). Wycliffe Gordon kicks off the afternoon scheduling during the first full day at sea, piloting The Jazz Cruise Gospel Hour. Aside from the trombonist’s testimony on “A Closer Walk With Thee” and “Come Sunday,” there were cameos by pianist Johnny O’Neal and St. Louis doyenne Mae Wheeler, who sang a righteous “He’s an On-Time God” before Nikki Harris (daughter of Three Sounds notable, Gene) was coaxed out of the audience to break things up with “This Little Light of Mine.”

Another daytime staple, usually gathering eight of the headliners at the Queen’s Lounge, was the Conversation With the Stars. The last of the four was an exceptional exception, a one-on-one conversation between composer/arranger Johnny Mandel and Jazz Cruise music director Ken Peplowski. So what did the famed reedman direct? A rather amazing all-star Big Band that included Warren Vache and Terell Stafford among the trumpets, John Allred and Gordon among the trombones, and Gary Smulyan and Rickey Woodard flanking the reed section. Some cruise veterans disregarded all alternatives when the all-star Big Band assembled at the Vista Lounge – with a parade of guest stars that included Callaway, The Four Freshmen, Freddy Cole, Denise Thimes, and Mandel over their four-evening run. On the night when Cole was listed as the headliner, Mandel peeped in on the first set, armed with his own arrangements of “Low Life” and “Emily.” Tough acts to follow, particularly after the battling tenor saxes of Woodard and Bill Easley on “Low Life,” but Mandel still had a mellow arrangement of “What a Little Moonlight Can Do” up his sleeve, featuring Peplowski on clarinet. Then the pièce de résistance: a luscious arrangement of Mandel’s Oscar-winning “The Shadow of Your Smile,” climaxed by a soaring Vache solo.

Aside from the eight primetime sets by a full all-star band, the roster of 30 broke itself into various small combo permutations for 22 more afternoon and evening sets. The plenitude of alternative fare – and three ports-of-call – kept us from seeing more than the last of those. Nor will space permit a detailed analysis of the 23 shows we did see and their combined 154-tune playlist.

But a pu-pu platter of handpicked musical highlights will help suggest the full garden of delights delivered by the full aggregation of 90 musicians who sailed aboard the Westerdam. In chronological order, then, let’s begin with Callaway and her trio torching “Blue Moon” on the first night at sea. Next evening, there was the Brazilian brass of Claudio Roditi and his quintet as the trumpeter unveiled “A Dream for Kristen,” dedicated to his wife. Then the quintet’s vocalist, Maucha Adnet, wife of group percussionist Duduka da Fonseca, sang a sweet suite of Brazilian gems, culminating in Jobim’s “Waters of March.”

Allyson and her quartet provided another vivid vocal memory with her perfect French – and 3/4 swing – on “Sous le Ciel de Paris” the following night, and on Wednesday, we made it back up to the Crow’s Nest just in time to hear Marlena Shaw and her trio finish their second set with her signature “Go Away Little Boy.” Denise Thimes was dazzling – and the photos prove it – from the moment she began her stint on the bandstand with “I’ve Got the World on a String.” Cole serenading Berry with a family heirloom, “Unforgettable,” at a special Hall of Fame ceremony was certainly an emotional high point for the audience at the Vista Lounge, but his “If We Never Meet Again/I’ll Be Seeing You” medley up in the Crow’s Nest remains my personal favorite.

The Four Freshmen worked nicely with a phalanx of five trombones on “Angel Eyes” and with three trumpets – plus the Freshmen’s own trumpeting Curtis Calderon – on “Route 66” during their session with the Big Band. But perhaps even more indelible was when drummer Jeff Hamilton sat in briefly with the quartet the following afternoon, jamming with Calderon on “There Will Never Be Another You.”

Peak instrumental moments included Houston Person’s plunge into the depths of “You Don’t Know What Love Is” and the tenorist’s ornery disquisition on “Please Send Me Someone to Love.” Bill Charlap delved just as deeply into the Thelonious sphere, weaving “Monk’s Mood” and “‘Round Midnight” into a misty medley. And in a musical one-on-one, Peplowski and tireless pianist Shelly Berg formed a duo, throwing everything they had at each other in “The One I Love Belongs to Somebody Else.”

As for the exploits of the sidemen throughout the week, Chris Foreman wins top laurels. Perched behind his Hammond B3 for guitarist Henry Johnson’s final quartet set, the young organist pounced on Wes Montgomery’s “Boss City” and flew off into orbit with it. Stunning. When Johnson announced that the next number would feature his drummer, Greg Rockingham stalked off the bandstand in a mock huff, insisting there was no way he was going to follow that.

With Hurricane Ida raging in the Gulf, rough seas made it prudent to cancel Grand Turk as our first Caribbean stop and steam ahead to St. Thomas. That was the only real hitch in the whole voyage, and the next Jazz Cruise will correct it. The 10th Jazz Cruise sails beyond the hurricane season of 2010 and embarks on January 30, 2011 – right after the two sailings of the Smooth Jazz Cruise, and on the same ship, Holland America’s newly refurbished Noordam. Preliminary lineup, pricing, payment plans, and ports-of-call are already posted at the Jazz Cruise’s web site.

It’s difficult to imagine what the stage and the audience would have looked like at Gaillard Center in Charleston, South Carolina, if Rhiannon Giddens’ new … END_OF_DOCUMENT_TOKEN_TO_BE_REPLACED

“It’s time to imagine a place where we can come together,” Danilo Pérez said from the hallowed stage of Washington, D.C.’s historic Sixth & I … END_OF_DOCUMENT_TOKEN_TO_BE_REPLACED

At the Zeiders American Dream Theater in Virginia Beach, Va., between April 8 and 10, the Vocal Jazz Summit convened in person for the first … END_OF_DOCUMENT_TOKEN_TO_BE_REPLACED

The Big Ears Festival returned to Knoxville in a big way in late March, drawing an estimated 30,000 music enthusiasts from across the U.S. and … END_OF_DOCUMENT_TOKEN_TO_BE_REPLACED