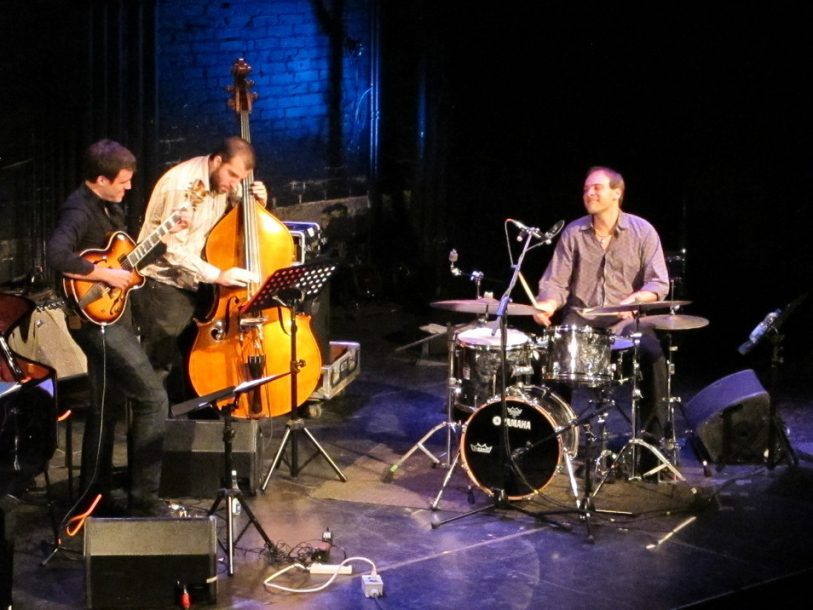 The Montreal Jazz Festival’s Jazz à l’année (Jazz All Year Round) series is in full swing, its fall offerings illustrative of its all-encompassing nature: jazz and blues alongside soul, folk-rock, Gypsy wedding jams, Brazilian and African music. Among the concerts presented in October were three very different, yet equally engaging groups: the SFJAZZ Collective, the Ari Hoenig Quartet and the Maceo Parker Band.

The SFJAZZ Collective is truly a collaborative project, all members contributing arrangements as well as their own compositions, taking turns presenting tunes, sharing their artistic visions. The collective has gone through various personnel changes since forming in 2004; its current configuration features eight members of diverse backgrounds, hailing from New Zealand, Venezuela, Israel, Puerto Rico and the U.S., and bringing distinct and complementary flavors to the mix. Each year the band interprets compositions penned by a chosen jazz giant (previous seasons have explored the works of Ornette Coleman, John Coltrane and McCoy Tyner); in season eight the band reworks the music of Stevie Wonder, a choice which some have considered anomalous, but which works fantastically well, given Wonder’s influence and these creative musicians.

Opening the first set at L’Astral was a swinging rendition of Wonder’s “Race Babbling” (off his Journey Through the Secret Life of Plants album), arranged by trombonist Robin Eubanks, whose bouncy Latin-tinged solo inspired trumpeter Avishai Cohen to dance at the back of the stage. Next came vibraphonist Stefon Harris’ arrangement of “Visions” (Innervisions), opening with Harris’ single, vibrating notes gradually coming together to form the lush intro, propelling the tune as the horns laid down the melody. Cohen introduced his reflective ballad “Family” (the title track off his new album with siblings Anat and Yuval), pianist Edward Simon taking a gorgeous solo. Bassist Matt Penman addressed the appreciative audience in French as he presented his tune “The Economy,” a “tragicomic subject” marked by driving rhythm and a sense of foreboding, slowing down as the horn players harmonized, scattering around the stage. Kendrick Scott, substituting for Eric Harland on this and other Canadian dates, broke it down on drums, leading into a strong statement by Miguel Zenón on alto.

The second set opened with “Young and Playful,” a composition penned by Simon and dedicated to his son, featuring a scorching Cohen solo. Zenón shone again on Mark Turner’s arrangement of “Blame it On the Sun” while Cohen and Turner stood out on Penman’s reworking of “Creepin'” (Fulfillingness’ First Finale), the muted trumpeter’s dark colorings setting an ominous tone before the other horns joined in with stunning harmonies, Turner entrancing on tenor. “Superstition,” artfully arranged by Zenón to reflect Wonder’s different statements of the theme, closed the evening; Eubanks stated the melody, rhythm reigned supreme, and inspired ideas kept flowing from all band members. The audience was seized by the band’s cohesion and energy.

The Collective’s original compositions and interpretations of Wonder’s music are documented on a three-CD set entitled Live in New York Season 8: Music of Stevie Wonder.

The following week L’Astral hosted Ari Hoenig and his fiery working quartet, with music derived mostly from his recent recording Lines of Oppression. Hoenig, joined by pianist Tigran Hamasyan, guitarist Gilad Hekselman and bassist Chris Tordini, opened with the album’s title track, alluding to the troubling labor dynamics he observed while on tour in Port au Prince, Haiti. This somber yet energetic tune, gradually building both rhythmically and harmonically, signaled what was to come-Hoenig demonstrating his versatility, explosiveness and mad skills, Hekselman’s fingers alternately flying along the fretboard and expressing tender lyricism, Hamasyan exhibiting intensity and facility, and Tordini effective if reserved (he was reportedly under the weather).

The lyrical ballad “Wedding Song” had Hoenig switching sticks and brushes, contributing evocative wordless vocals as the tune built to its apex. Thelonious Monk’s “Rhythm-A-Ning” was given a thorough Hoenig-esque treatment, going from angular to round and back again, Hamasyan’s classical influences seeping through his virtuosity. Hoenig’s pyrotechnics made use of anything and everything, including an idle music stand, his facial expressions disclosing the intensity and sheer joy experienced through this highly communicative group interplay. And the crowd was feeling it!

Next came “Ska,” an older tune infused with its namesake rhythm and deep groove, Hoenig gradually accelerating just as Hekselman delivered his most poignant lines; the ska beat returned at the end of the tune, building up to a frenetic speed that seemed it could go no faster, then desisting all at once. The quartet’s second set opened with “The Painter,” a Hoenig post-bop number off his 2004 album of the same title, which showcased Hamasyan, to the delight of his local following. Hoenig opened Bobby Timmons’s classic “Moanin'” playing the theme (!) using mallets, fingers and elbows, making the melody sing on his drum kit. The leader’s captivating “Arrows and Loops” in 11/8 ended the set, with Hamasyan’s solo drawing on his Armenian roots, Hekselman and Tordini tapping on their instruments, Hoenig getting up and clapping. Smiles all around; this band has a uniquely familiar, warm rapport. The audience responded with roaring applause and a standing ovation, and a few moments later Hoenig returned to deliver a solo encore. “This is a folk tune some of you might know,” he said grinning, and then launched into a poignant, mesmerizing rendition of “This Little Light of Mine.” A night of pure energy, emotion and technique.

Maceo Parker: Funk All the Way

“Is this a jazz festival?” asked Maceo Parker as he greeted a hyped crowd at the jam-packed L’Astral. “Two percent!” yelled back an audience member. “Well, we’re gonna play 2 percent jazz, and 98 percent funk!” promised Parker, and that’s exactly what he delivered: nearly two hours of unbridled, booty-shaking funk. Nothing could have made this adoring audience-a mix of 20-somethings, 60-somethings and everything in between-any happier. They were there for the funk.

Montreal’s own DJ extraordinaire, Andy Couchman, opened for Parker with a set of choice funk and soul nuggets; Maceo soon followed, with a youthful energy far exceeding his 68 years. He was accompanied both by veterans (Rodney “Skeet” Curtis on bass; William Boulware on keys; Bruno Speight on guitar) and young cats (nephew Marcus Parker on drums, and trumpeter Lee Hogans, who was mostly responsible for the 2 percent). Parker delivered some vintage funk, including the James Brown classics “Make it Funky” and “Pass the Peas,” sprinkling a bit of “Some Enchanted Evening” in between. In what was the evening’s highlight, backup singer Martha High of the James Brown Band killed Lyn Collins’ ’70s classic “Think (About It),” her vocals as strong as ever. Towards the end of the show Parker channeled Ray Charles-dark sunglasses, body swaying side to side-and sang a verse of “You Don’t Know Me,” melting the audience before bringing the funk back. “We love you! We love love! We love to love!” called the funk master, and the crowd loved him back.

“It’s time to imagine a place where we can come together,” Danilo Pérez said from the hallowed stage of Washington, D.C.’s historic Sixth & I … END_OF_DOCUMENT_TOKEN_TO_BE_REPLACED

At the Zeiders American Dream Theater in Virginia Beach, Va., between April 8 and 10, the Vocal Jazz Summit convened in person for the first … END_OF_DOCUMENT_TOKEN_TO_BE_REPLACED

The Big Ears Festival returned to Knoxville in a big way in late March, drawing an estimated 30,000 music enthusiasts from across the U.S. and … END_OF_DOCUMENT_TOKEN_TO_BE_REPLACED

Let’s get this out of the way: The Savannah Music Festival is not a jazz festival. Held over the course of 17 days in late … END_OF_DOCUMENT_TOKEN_TO_BE_REPLACED