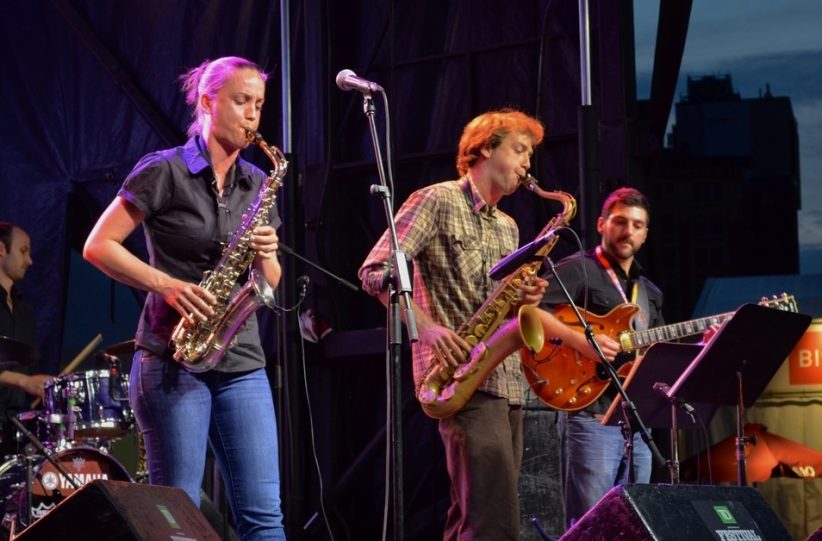 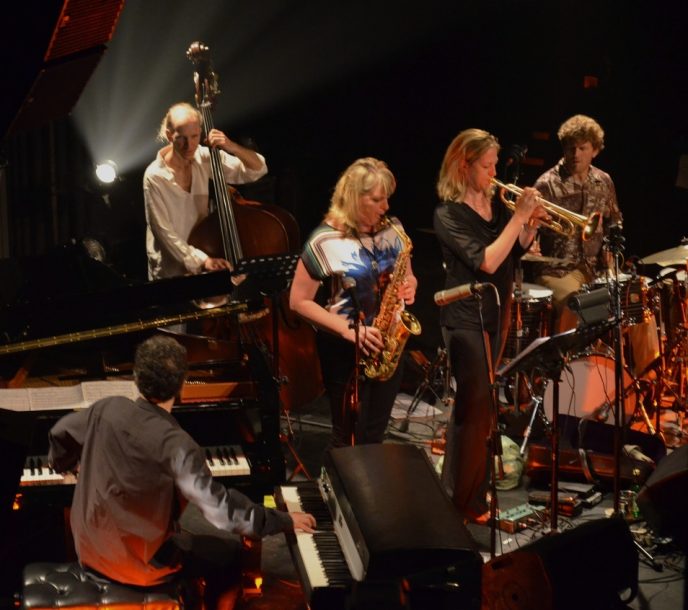 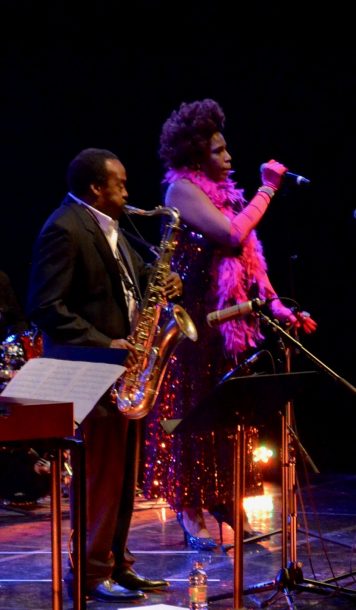 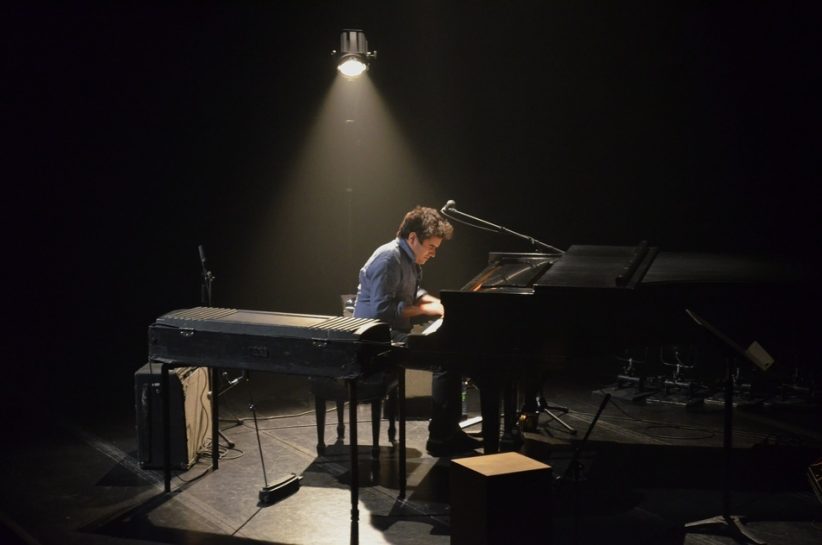 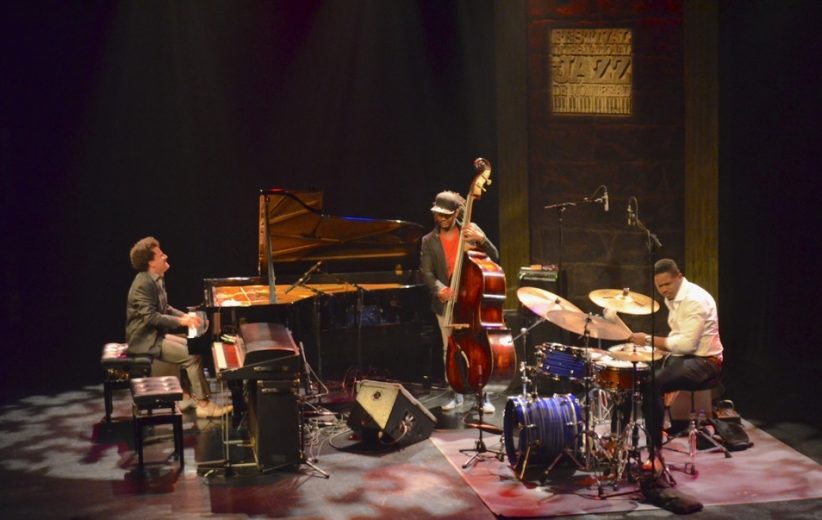 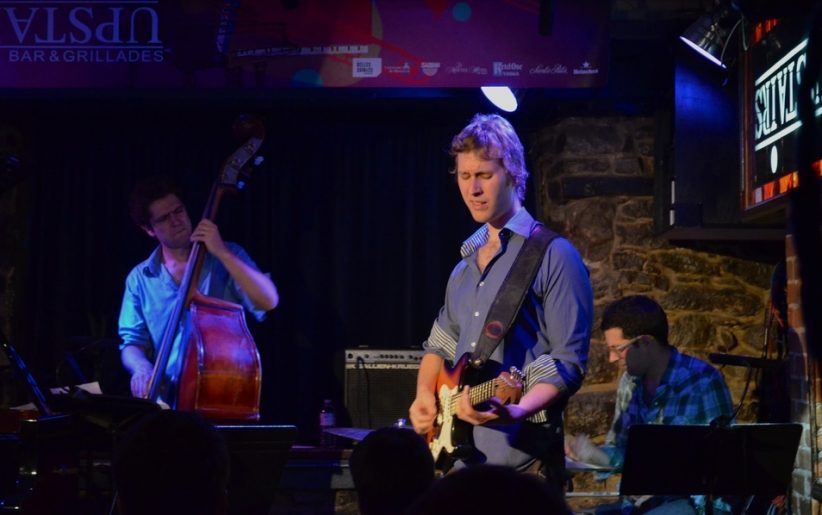 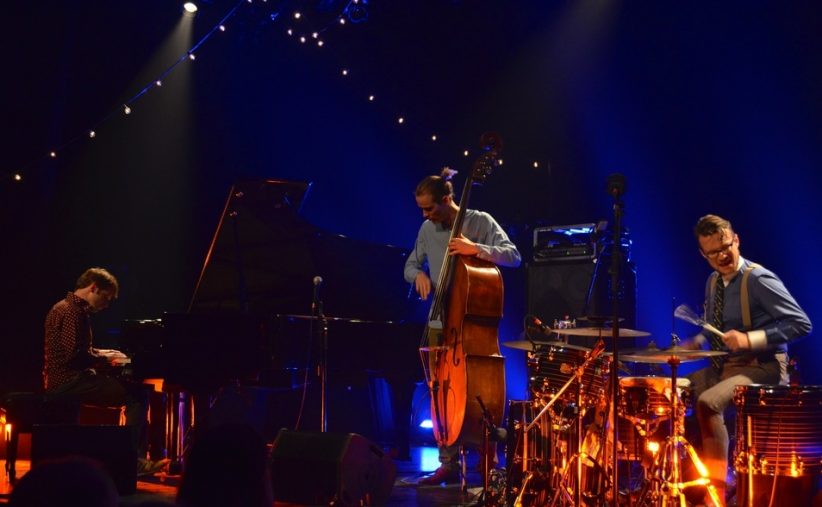 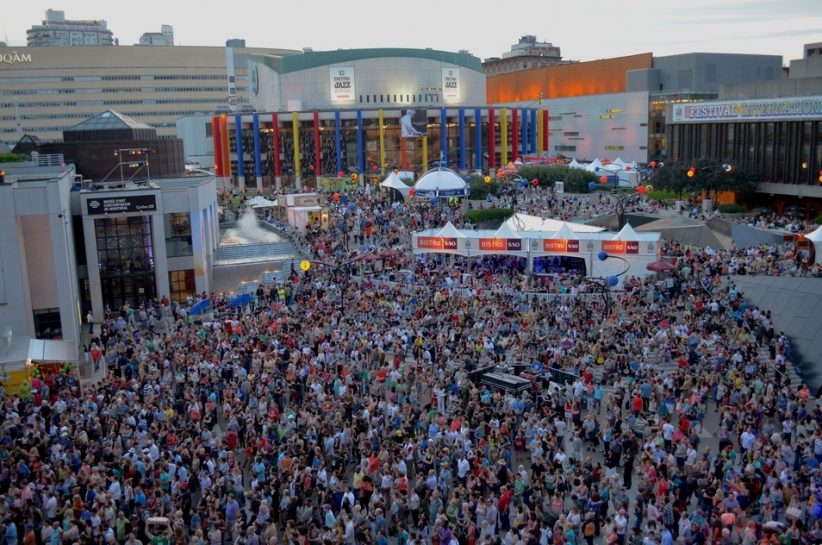 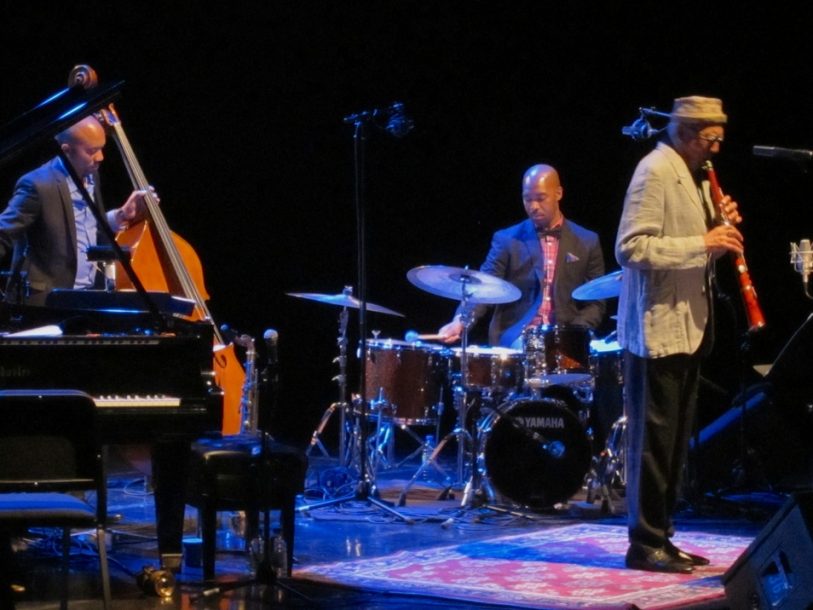 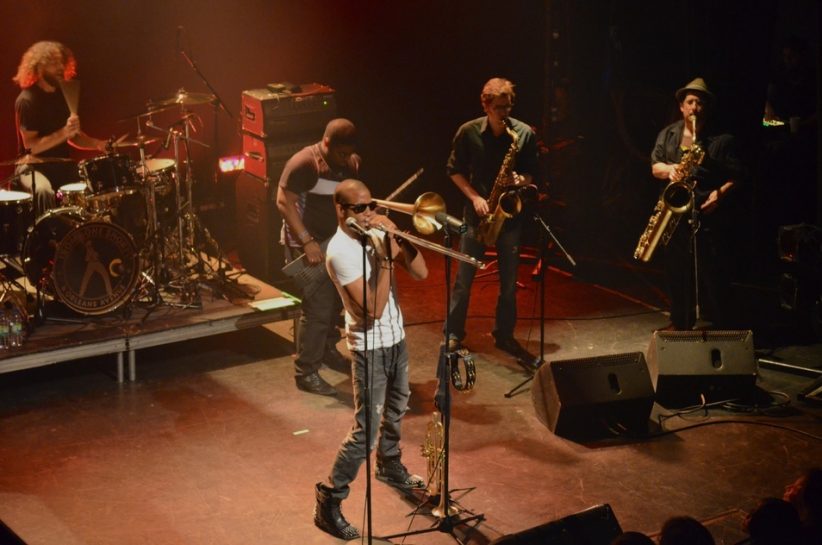 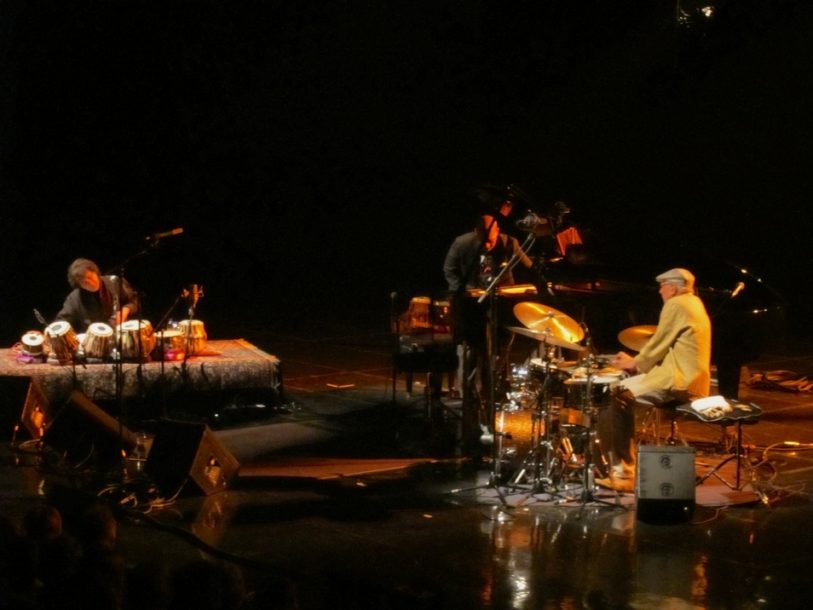 Tens of thousands convened outdoors for the grand opening concert of the Montreal Jazz Festival by Canada’s own superstar Feist. There was also a whole lot of jazz happening in various venues that night, performed by artists including the Barry Harris Trio, Tia Fuller and quartets led by Charles Lloyd and Ravi Coltrane.

Throughout the Festival’s 34th edition, jazz buffs had a wide range of jazz to explore, from the Jazz at Lincoln Center Orchestra with Wynton Marsalis to Tim Berne’s Snakeoil project, and everything in between. The marathonic 10-day adventure actually began the previous night, with an excellent pre-opening concert by guitarist Gilad Hekselman at the Upstairs Jazz Bar and Grill, accompanied by virtuoso drummer Jeff Ballard and former Montrealer Rick Rosato on bass. Hex & co. performed music drawn mainly from his recently released This Just In, with an intriguing take on the Alan Parsons Project’s “Eye In The Sky,” the shifting dynamics of “March of the Sad Ones,” and a breathtaking rendition of Baden Powell’s “Samba em Preludio,” eliciting the song’s aching, yearning lyrics. The three developed a strong rapport, Hekselman’s imaginative, fluid lines dazzling the audience. Other guitarist headliners included Bill Frisell, Charlie Hunter, Kurt Rosenwinkel, Nir Felder, Lionel Loueke and John Abercombie.

Welcomed by roaring applause, veteran saxophonist Charles Lloyd was visibly touched as he accepted the 2013 Miles Davis Award from the Festival’s Artistic Director, André Ménard. It was the first concert in his Invitation Series (Vijay Iyer hosted the second). The performance featured Lloyd’s supremely gifted quartet of pianist Jason Moran, bassist Reuben Rogers and drummer Eric Harland. Employing tenor saxophone, taragot and flute, Lloyd led the band on a mesmerizing journey from Eastern grooves and melodies through post-bop and beyond. Lloyd often wandered the stage, nodding at the intimate, intuitive rapport on display, sometimes tucking his head and arms under the piano lid as he played hand percussion. “Thanks for the beautiful vibe; it means a lot to us,” said Lloyd as the band returned for a tender encore of Leonard Bernstein’s “Somewhere.”

The second evening featured Lloyd’s Sangam project, with tabla master Zakir Hussain and Harland on drums (and piano). Hussain was the only band member to strictly play his instrument; Lloyd and Harland played musical chairs, Lloyd beginning on piano but soon moving to the drum kit, Harland drawing various percussive sounds from the piano. The music was sublime, the musicians’ joy tangible. Harland and Hussain, who contributed enchanting vocals as well, established gripping rhythmic rapport. “We are dreamers … but we live in the now,” mused Lloyd as he opened the final duo/trio installment of the series, exploring material from Hagar’s Song (ECM), his recent recording with Moran. Moran’s reverence for tradition, intertwined with his modernist approach, made for a musically and emotionally nuanced dialogue. “This is our first meeting, so please be kind,” Lloyd implored the audience as he welcomed guitarist Bill Frisell to the stage. But indulgence was hardly necessary; Frisell’s attentiveness and the open-hearted exchange made for gorgeous trio improvisation.

Down the street at Club Soda, Trombone Shorty and his rocking Orleans Avenue exhilarated the packed house with a high-energy performance, Shorty leaving mouths wide open with a circular breathing demonstration that seemed to last forever.

One of the festival’s centerpieces, this three-part celebration for the illustrious saxophonist opened with the all-female ACS Trio: pianist Geri Allen, drummer Terri Lyne Carrington and bassist Esperanza Spalding. The three paid homage both in their choice of material (Shorter’s enduring compositions) and approach, melody seeping through vigorous improv.

Lovano’s “Sound Prints” (like the group’s name, a play on Mr. Shorter’s “Footprints”) opened, followed by Douglas’ “Dream State” and Lovano’s “Weather Man” (Shorter “lets you know what’s happening, and forecasts the future,” said Lovano). The concept worked, and the band’s chemistry was something to experience. The evening’s final, much anticipated installment featured Shorter’s eminent quartet of pianist Danilo Perez, bassist John Pattitucci and drummer Brian Blade, demonstrating just why this celebration was in order.

Commissioned by Harlem Stage, this project brings the legendary Fats Waller into the 21st century, making him musically and culturally relevant through a present-day sensibility and a genuine party vibe. A huge Fats Waller bust sat atop Moran’s piano, smiling at the audience as the set began. Moran would later put the bust on his own head, often getting up to dance, creating a surreal audio-visual experience. This modern jazz heavyweight and his cohorts gave Waller’s classic tunes-progressive during the ’30s and ’40s-new life.

“What I love about Fats Waller,” explained Moran, “is his ability to entertain, as well as [being an] extreme modernist at the piano … I consider him the Michael Jackson of that time. And he made people feel good, even though the Great Depression was in full swing. He also made social commentary about America at the time … And most importantly, he could make people dance.”

Meshell Ndegeocello co-led the proceedings, playing a touch of bass and contributing vocals together with singer Lisa Harris, supported by the mighty Tarus Mateen on bass, Charles Haynes on drums and Leron Thomas on trumpet. Ndegeocello came onstage bearing the sign “Dansez avec nous/Dance with us,” reinforcing the evening’s expressed intention as she invited the audience to join the band onstage and dance. And so they did, the party vibe in full effect as the band performed “Ain’t Misbehavin’,” “Your Feet’s Too Big,” “Handful of Keys” (Moran’s solo tour-de-force) and “Two Sleepy People,” with Thomas’ crowd-pleasing, elegantly delivered vocals. The set ended with “This Joint Is Jumpin’,” the audience flooding the stage and dancing in the aisles. “The Montreal Jazz Festival audience is ravenous,” Moran summed it all up. “They are there to listen … It’s a rare festival and a rare audience.” A recording of the music for Blue Note Records, slated for release next spring, is in progress.

Jazz From Across the Pond

Quite a few European artists played the festival, among them Italian pianist and composer Enrico Pieranunzi; young French pianist Thomas Enhco; British saxophonist Courtney Pine and his unique brand of Afro-Caribbean jazz; and Danish/Swedish/British trio Phronesis, often compared to e.s.t. and well worth checking out. French pianist Jacky Terrasson and his trio-bassist Ben Williams and drummer Justin Faulkner-had the audience rapt, opening with “Bésame Mucho” and following with an expertly woven medley of Michael Jackson’s “Beat It,” the standard “Smoke Gets in Your Eyes” and the Harry Potter theme; Duke Ellington’s “Caravan”; the leader’s “My Church”; and an abbreviated version of Dave Brubeck’s “Take Five.” The energetic, tightly knit trio offered “Love for Sale” as an encore (referencing Herbie Hancock’s “Chameleon”), Faulkner engaging the audience in rhythmic finger-snapping, and returned for a second encore of Abdullah Ibrahim’s “Maraba Blue.”

The abundance of local talent featured this year included quite a few saxophone players. Saxophonist-composer and JUNO winner Christine Jensen performed both in a quartet setting with sister-trumpeter Ingrid Jensen, pianist Gary Versace and drummer Jon Wikan, and as musical director of the newly formed Orchestre national de jazz de Montréal. “The ONJM is extra special,” reflected Jensen, “as I get to leave my comfort zone as conductor of my own music, while conducting some contemporary musical concepts [by other] artists … including [trombonist] Jean-Nicolas Trottier and [pianist] Marianne Trudel.” The evening opened with Jensen’s compelling “Blue Yonder,” and also featured a tribute to Joni Mitchell starring singer Karen Young, and “Africa” from John Coltrane’s Africa/Brass sessions. Promising young saxophonist Becky Noble and her sextet performed music from her recently released Salish Folk Song (Effendi). JUNO-winning saxophonist Joel Miller and his Honeycomb group delivered a passionate, rhythmically diverse set inspired by the sounds of this multicultural city.

Among the many physical, spiritual, and institutional losses related to the still-ongoing pandemic is that of Los Angeles’ renowned Playboy Jazz Festival (PJF) at the … END_OF_DOCUMENT_TOKEN_TO_BE_REPLACED

It’s difficult to imagine what the stage and the audience would have looked like at Gaillard Center in Charleston, South Carolina, if Rhiannon Giddens’ new … END_OF_DOCUMENT_TOKEN_TO_BE_REPLACED

“It’s time to imagine a place where we can come together,” Danilo Pérez said from the hallowed stage of Washington, D.C.’s historic Sixth & I … END_OF_DOCUMENT_TOKEN_TO_BE_REPLACED

At the Zeiders American Dream Theater in Virginia Beach, Va., between April 8 and 10, the Vocal Jazz Summit convened in person for the first … END_OF_DOCUMENT_TOKEN_TO_BE_REPLACED