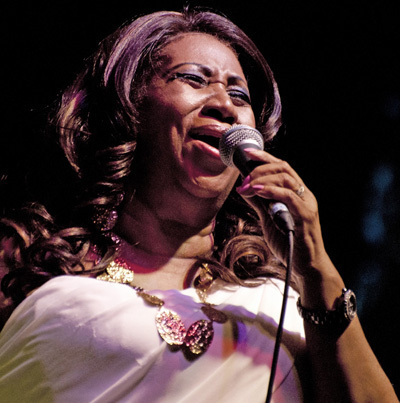 The puzzle may be as indecipherable as the one about angels and pinheads, but how many non-jazz performers does it take to officially blur a festival’s jazz status? The Toronto fest, admirably a longtime holdout, chose a rather auspicious occasion – its 25th anniversary – to venture farther than ever down that path.

True, of the more than 1,500 artists who descended on Toronto between June 24 and July 3, the vast majority were bona fide jazz players. But on the festival’s mainstage, this year moved to freshly minted David Pecaut Square (named for a former Ohioan whose immense affection for his adopted hometown resulted in widespread civic betterment), nearly half of the 10-night schedule was filled with such names as Aretha Franklin, the Average White Band, Bootsy Collins, Los Lonely Boys and The Roots. As with any major festival, the mainstage acts are the principal calling cards, the headliners meant to shape its programming nexus and frontload the advance publicity. Of course, such programming egalitarianism has influenced the concurrent Montreal fest for years and is also creeping in everywhere from Rochester to Monterey and Cape Town to Curacao.

Two years ago around this time, they had a jazz festival in Newport, R.I., the same way they have for decades. One year ago, as … END_OF_DOCUMENT_TOKEN_TO_BE_REPLACED

This writer has always disliked first-person criticism. Readers don’t care about a writer’s subjective experience of art. The Leopolis Jazz Fest, however, has put me … END_OF_DOCUMENT_TOKEN_TO_BE_REPLACED

After a pandemic-induced hiatus that canceled last year’s 17-day event, Spoleto Festival USA was back in Charleston, South Carolina, for 2021—but not all the way. … END_OF_DOCUMENT_TOKEN_TO_BE_REPLACED

For JazzTimes’ (and this writer’s) first time back to physical, face-front-to-the-stage live performance in more than a year, one thing was certain: It was spooky. … END_OF_DOCUMENT_TOKEN_TO_BE_REPLACED