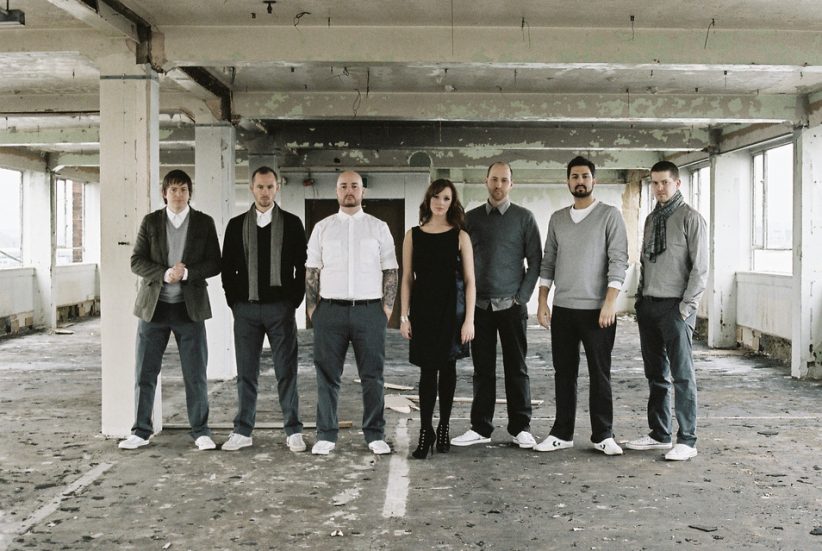 “Our music is rooted in dub reggae, that’s our heritage,” says Dom Howard, aka Ruckspin, Submotion Orchestra’s prodigious live engineer. “But then you could argue that reggae has its origins in jazz. So we trace our musical roots back a long way.”

The Submotion sound is as compelling as it is hard to pin down. It is an intimate, at times raucous, fusion of soul, jazz, reggae, electronica and dubstep – the latter being a brooding, bass-heavy style that emerged from London’s underground clubs about ten years ago. Whatever you call it, theirs is a distinctly urban sound. Listen to it and shut your eyes; you can almost hear the rain against the car window as a pre-dawn cab takes you back home through the big city.

The group consists of a quintet of players, plus producer, whose outstanding musicianship is robust bedrock for lead singer Ruby Wood’s exquisite, Sade-like vocals. While more at home delivering their sub-driven sound in the high-octane confines of a basement rave, Submotion Orchestra gave a concert of impeccable quality in the more refined environs of Warwick Arts Centre – an exceptional bastion for the arts, built on the UK’s University of Warwick campus (see more: www.warwickartscentre.co.uk).

“It was the weirdest gig we’ve ever done,” admitted upbeat and heavily-tattooed bassist Chris Hargreaves, speaking backstage. “We’re used to playing in sweaty clubs, not sit-down concert halls. But our music is cerebral as well as physical – so I hope it worked for the audience.”

It worked a treat. The plush concert hall provided an ideal albeit unusual space for Submotion’s moody orchestration, warm synths, spacious dub production and melancholic, muted flugelhorn lines. There were moments of blissful serenity – as well as their usual mix of gritty, faster tunes. The show opened with the piano arpeggios and fragile vocals of ‘Hymn for Him’, its delicate lines cemented by a rumbling sub-bass and syncopated dubstep rhythm. The piece’s intimate mood was effortlessly recreated mid-set too with ‘All Yours’, its sensual vocal melody seeming to emanate from some forgotten R&B 45.

It wasn’t all smoker’s delight though. The furious ‘Pop and Lock’ unleashed its soaring horn solo above an adrenaline-soaked heartbeat of a rhythm; ‘Secrets’ erupted with its jazz-ska climax, scribbled over with squalls of trumpet solos. This, as with many of their up-tempo pieces, were propelled by percussionist Danny Templeman, who counts Cuban and Brazilian styles as his particular speciality.

Submotion’s producer, Dom ‘Ruckspin’ Howard, conjured up a stunning live sound, digitally manipulating vocals and instruments into a maelstrom of reverb, dub delay and general astral weirdness. A classically-trained viola player, Howard has been DJ-ing and producing music since the age of 15 and has performed at venues as diverse and prestigious as Royal Festival Hall, York Minster and Croatia ‘s Outlook dubstep festival.

The band originally met on the illustrious jazz course at Leeds College of Music, UK, and drew in remaining members from other quarters of the city’s vibrant music scene. They continue to contribute to a range of other projects, including jazz act IDST, reggae band Gentleman’s Dub Club, soul siren Andreya Triana, funk group Breakestra, drum & bass star Jenna G, and renowned Leeds jazz night, The Spin Off.

It’s still early days for Submotion but – in the year that electronic music properly found itself – their mesmeric and impressive range of sounds promises to carve them a decent niche for some time to come.

The 2022 Newport Jazz Festival’s three days of sunshine were bracketed, more or less, by a pair of all-star ensemble jams that included Christian McBride. … END_OF_DOCUMENT_TOKEN_TO_BE_REPLACED

In its first full edition since the onset of the pandemic, and with a new director of programming, the Festival International de Jazz de Montréal … END_OF_DOCUMENT_TOKEN_TO_BE_REPLACED

Among the many physical, spiritual, and institutional losses related to the still-ongoing pandemic is that of Los Angeles’ renowned Playboy Jazz Festival (PJF) at the … END_OF_DOCUMENT_TOKEN_TO_BE_REPLACED

It’s difficult to imagine what the stage and the audience would have looked like at Gaillard Center in Charleston, South Carolina, if Rhiannon Giddens’ new … END_OF_DOCUMENT_TOKEN_TO_BE_REPLACED