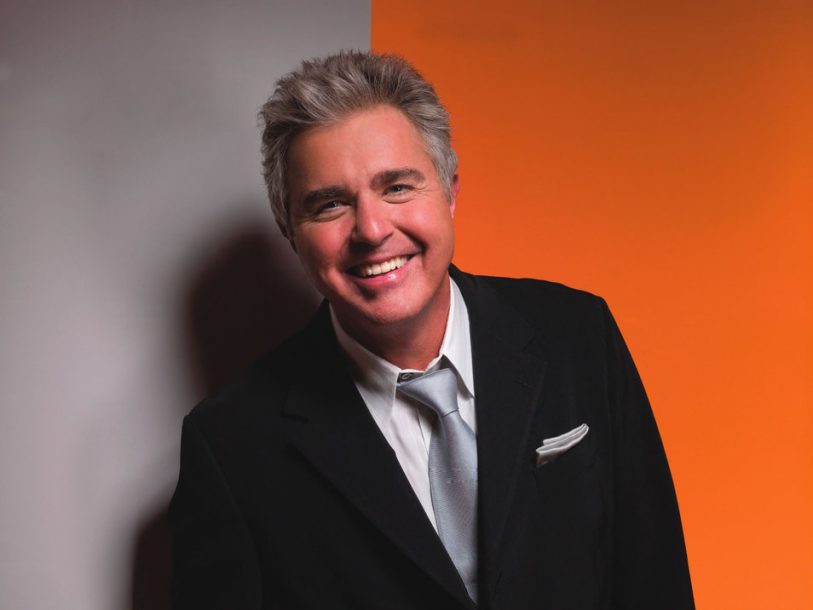 Steve Tyrell dropped a whole lot of names during his pre-Christmas performance at the storied Café Carlyle on Manhattan’s Upper East Side. President Clinton and his family, Rod Stewart, Burt Bacharach and Hal David, Frank Sinatra-all of them were name-checked during the hour that the 67-year-old Tyrell commanded the stage. But none of it was gratuitous: Tyrell, between his two-decade career as a song stylist and nearly three before that behind the scenes, has rubbed elbows, professionally and socially, with many hotshots of different stripes, and those encounters each provided back story for a song or two: He explained, for example, that Chelsea Clinton’s first dance at her wedding was to his recording of “The Way You Look Tonight,” which Tyrell sang in the Steve Martin film Father of the Bride and again on this night. That high-profile appearance launched Tyrell’s career as a headliner, and as if to drive the importance of the point home, Martin was seen entering the hotel that hosts the café for the late show. The guy keeps A-list company for sure.

At the Carlyle it was easy to see why he’s so admired. Tyrell is a charmer, a salt-and-peppered Texan transplant who brings a perfect balance of grit and gloss to his preferred Great American Songbook and vintage R&B and pop repertoire. He hits all the right notes, puts on an engaging show, tells captivating tales and comes off as a down-to-earth, approachable fellow. Tyrell never steps out of the box musically; that’s not what he’s about. Whether he’s singing Sam Cooke or Rodgers and Hart, his interpretations are faithful to the composers’ intent, his timing and phrasing always in the pocket, never off-center. The arrangements are classy and classic, and his five-piece band is supportive but never show-offy. He is impressive without trying to be.

Tyrell knows that he’s filling oversized shoes when he returns annually to the Carlyle each December-this was his seventh holiday run. For 36 years before he arrived this stage was the late Bobby Short’s-his portrait hangs in the lobby just outside the café’s entrance-and Tyrell, as good as he may be, will likely never take his predecessor’s place as a Carlyle legend. So all he can do is sing his heart out, and that he did. He started tentatively with a few obligatory Christmas tunes, a finger-snapping, hand-clapping “Santa Claus Is Coming to Town” setting the pace. The swinging seasonal standards came from Tyrell’s 2002 album This Time of Year, but he seemed happy to get them out of the way so he could concentrate on his forthcoming Concord release I’ll Take Romance, due around Valentine’s Day. He announced the Cooke-associated “(I Love You) For Sentimental Reasons” as a favorite of his parents’ and gave it a warm, emotive reading. “Talk To Me, Talk To Me,” originally an R&B ballad by Little Willie John, displayed Tyrell’s mix of the smooth but grainy ideally. His vocals are measured, his dynamics effective, and if there are no real surprises that’s no real surprise-he wins over the room the old-fashioned way, by taking a solid song and doing it justice.

Tyrell’s band-Quinn Johnson on piano, Ed Howard on bass, Bob Mann on guitar, David Mann on flute and sax, Kevin Winard on drums and Jon Allen on keyboards-never upstages him. The two (unrelated) Manns and Johnson each delivered well-framed solos and smart accompaniment but they know their place here, and that is to give Tyrell exactly what he needs. David Mann blew some ballsy sax at the outset of “Bewitched, Bothered and Bewildered,” but he kept himself in check. That song, as well as “Fly Me to the Moon,” which followed it, appeared on Tyrell’s Songs of Sinatra tribute album, and Tyrell was savvy enough when he sang them to avoid imitation and instead inject the Chairman’s essence into his own style. “At Last,” the Etta James ballad that opens I’ll Take Romance, was likewise given a comfortably familiar reading here, its bluesy core handled deftly by the singer and band. And “Ain’t Misbehavin'” gave Johnson an opportunity to toss in some ragtime-inspired figures but no one would accuse Tyrell of thinking he’s Fats Waller.

Some of the show’s most interesting music came toward the end when Tyrell, who worked with Bacharach, David and their protégé Dionne Warwick early in his career, offered a trio of Bacharach-David hits: “The Look of Love,” “This Guy’s in Love With You” and the Warwick smash “I Say a Little Prayer.” For that last one Tyrell swapped a few gender-specific lyrical references and made it work for him. It was a resourceful move and the cover would have been perfect had someone not decided it needed sampled background vocals to beef it up. Similarly, while Allen’s keyboard work throughout generally gave the overall sound more body, the faux orchestration he occasionally employed only served to stain the otherwise natural-sounding band’s accompaniments.

Minor quibbles aside, Tyrell still proves worthy of the Carlyle. While he bares little in common with Bobby Short outside of a shared love for the Songbook and a flair for showmanship and style, Tyrell is the right man for the job. Neither slick nor slack, his merger of revered popular songcraft and other time-honored American musical strains is just what the holidays, with their focus on remembrance and tradition, call for.

Among the many physical, spiritual, and institutional losses related to the still-ongoing pandemic is that of Los Angeles’ renowned Playboy Jazz Festival (PJF) at the … END_OF_DOCUMENT_TOKEN_TO_BE_REPLACED

It’s difficult to imagine what the stage and the audience would have looked like at Gaillard Center in Charleston, South Carolina, if Rhiannon Giddens’ new … END_OF_DOCUMENT_TOKEN_TO_BE_REPLACED

“It’s time to imagine a place where we can come together,” Danilo Pérez said from the hallowed stage of Washington, D.C.’s historic Sixth & I … END_OF_DOCUMENT_TOKEN_TO_BE_REPLACED

At the Zeiders American Dream Theater in Virginia Beach, Va., between April 8 and 10, the Vocal Jazz Summit convened in person for the first … END_OF_DOCUMENT_TOKEN_TO_BE_REPLACED