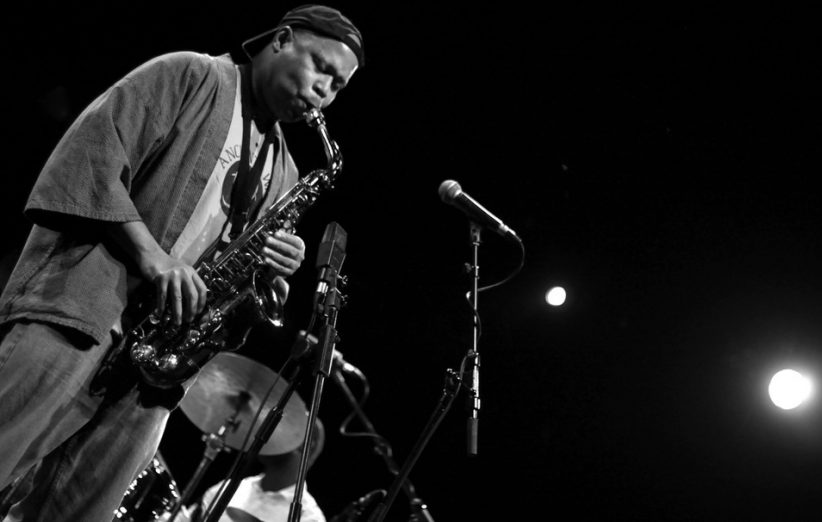 The legendarily unconventional alto saxophonist Steve Coleman-who would, of course, never deign to be called a “jazz” musician-helped lead off the London Jazz Festival at Queen Elizabeth Hall on Friday night. In his first appearance at England’s capital in seven years, Coleman began the evening with a public interview in the lobby of the venue, which served as much as a welcoming party as it did an in-depth look at his musical perspectives. But the talk was poignant, and, coupled with his live set, reminded one that what makes a performer like Coleman so special is the fact that hearing him play is very much like hearing him speak.

When asked about the diverse rhythmic qualities of his music, Coleman – as he has done in the past, both verbally and in essays – compared it to the intuitive style of boxers and basketball players. As always, he refused to categorize or place a Western tag on the rhythms he feels, especially regarding the ever-present question: Where’s beat one?

“One is an illusion,” Coleman declared, with absolutely no reservations.

And with that maxim fresh in the minds of his audience, he came out swinging. After a brief opening set by London-based saxophonist Steve Williamson and pianist Pat Thomas – who skillfully blended wildly hard-edged, free tonalities reminiscent of Ornette Coleman with more colorful sensitivity – Coleman reminded London why it’s still worth paying attention to his every note.

His Reflex trio, featuring David Virelles on piano and Marcus Gilmore on drums, showed a fluid sense of communication from the outset. Along with all three being in top form technically (and Coleman in his trademark backwards baseball cap), the inclusion of an electric keyboard atop Virelles’ grand – which doubled as an expansively warm, full bass – gave the layers of Coleman’s characteristic African Diaspora sound a fresh texture. Years after the famous travel hiatus that has subsequently figured so heavily in his compositions, it’s clear that Coleman still feels entirely comfortable and in touch with his international roots. Rather than becoming overly cerebral, even Reflex’s longest spontaneous, free form jams were built within a profound balance of sound and silence that, perhaps, can only really be learned and effectively led by one who has traveled the world.

Even after quality backing from his trio, Coleman still soared most soulfully within breaks of unaccompanied solos, in which he spouted his own meditatively personal, beat-based melodies while retaining intelligent structure. Gilmore, with an expanded drum kit that included a second bass drum turned on its side and a variety of bells, also dug in with several emotional and organic solos.

What is perhaps Coleman’s greatest skill is his ability to make a huge theater like that of Queen Elizabeth Hall feel intimate. Along with the obviously deft sense of the power of low volumes and subtle transitions that marked his performance, the last quarter of the set – including virtually all of the encore -was dominated by Coleman’s spontaneous, rhythmic vocal improvisation. While a bit rough around the edges, his scatting continued to reveal the deep personal connection he shares with the music he refuses to define in simple terms. When one is an illusion, so much else becomes real – and he makes that clear each time he opens his mouth, to create some foreign yet familiar sound.

Coleman even found it in himself to say his farewell with rhythmic swagger, landing his final breath of scat perfectly in time: “Goodnight.”

The 2022 Newport Jazz Festival’s three days of sunshine were bracketed, more or less, by a pair of all-star ensemble jams that included Christian McBride. … END_OF_DOCUMENT_TOKEN_TO_BE_REPLACED

In its first full edition since the onset of the pandemic, and with a new director of programming, the Festival International de Jazz de Montréal … END_OF_DOCUMENT_TOKEN_TO_BE_REPLACED

Among the many physical, spiritual, and institutional losses related to the still-ongoing pandemic is that of Los Angeles’ renowned Playboy Jazz Festival (PJF) at the … END_OF_DOCUMENT_TOKEN_TO_BE_REPLACED

It’s difficult to imagine what the stage and the audience would have looked like at Gaillard Center in Charleston, South Carolina, if Rhiannon Giddens’ new … END_OF_DOCUMENT_TOKEN_TO_BE_REPLACED