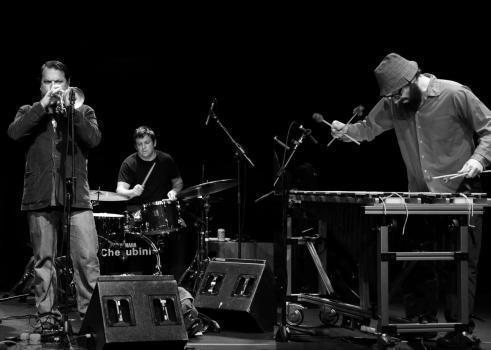 When a genre-pushing group like Starlicker comes to Pittsburgh, they usually wind up playing at either a storefront art gallery or a neighborhood bar that typically books up-and-coming rock bands. Starlicker had the benefit of playing the Andy Warhol Museum’s comfortable auditorium, a boon for a band due to the space’s great acoustics and empathetic sound person. For the audience, the 100-plus seats are comfortable and there are no distractions from the music.

The room was less than half full, but that didn’t discourage Starlicker by any means. These three Chicago residents-cornetist Rob Mazurek, vibraphonist Jason Adasiewicz and drummer John Herndon-took to the stage without so much as an introduction and launched into the title track from their Double Demon album (Delmark) as if they were playing for a packed house. Although Mazurek composes all the band’s work, there was clearly a three-way conversation going on, and a blending of styles. The cornetist often played in a series of short phrases, jumping back from his microphone after finishing one and bouncing up and down, reacting to his bandmates. Adasiewicz took on double duty, creating a swirling sound on his vibes that added a necessary density while simultaneously offering another lead voice. Herndon came close to overpowering his bandmates during the first set. He played all over his kit constantly, clearly in tune with the compositions, even as he added some thunderous tom crashes (evoking Elvin Jones a couple of times) and knocked one of his cymbals off the stand mid-song.

Mazurek, who also plays with groups ranging from the Exploding Star Orchestra (which can have as many as 19 members) to the Chicago Underground Duo, spoke to this writer a few weeks earlier about his desire to use his writing to create “psychedelic illumination drones, a sound that has nothing to do with genre, hip lines, denigrating the past. I have been searching for a way to illuminate sound, so it just hangs there in the clouds, like a cloud, like a complex cloud of power and sweetness,” he explained via email.

Yet while the Orchestra and the Duo create music that begins with more of a drone quality to it and builds up into something rich and expansive, Starlicker feels rooted in more of a post-Coltrane, fire music type of sound. This same group previously played on Mazurek’s Sound Is, with the addition of two bassists. Without being pinned down by those instruments, they travel freely with this music, never careening off into free territory but getting very close to it. Each band member has numerous other music projects in addition to this (among them, Herndon’s work with the adventurous rock band Tortoise and Adasiewicz’s Rolldown quinet that borrows from the sound of Out To Lunch), and the blending of these background takes Starlicker to exciting places.

Adasiewicz’s visceral movement over his vibes made him look like both a puppeteer and puppet. With two mallets in his hands at all times, he often looked like he was manipulating marionettes, frequently turning his equipment into a blur of colors when his hands moved quickly, and, as he often does, pounded away at his instrument. The way he leaned over the vibes and danced might have forsaken traditional technique, but it sure sounded good. Occasionally he used some tricks that made them sound like a backward recording or like they were prepared, with a more metallic and percussive sound. At other times, like the multi-section “Triple Hex” Adasiewicz into began with a more gentle approach before Herndon started creating waves behind him and Mazurek. This particular piece went through a variety of shapes before it finished, including a moment that felt like a ska beat.

During the last piece of the night, “Skull Cove,” Mazurek looked pretty serious but between cornet lines, he let fly with some enthusiastic whoops, as proof he was having a good time. For the few fascinated people that populated the room, the feeling was mutual.

The 2022 Newport Jazz Festival’s three days of sunshine were bracketed, more or less, by a pair of all-star ensemble jams that included Christian McBride. … END_OF_DOCUMENT_TOKEN_TO_BE_REPLACED

In its first full edition since the onset of the pandemic, and with a new director of programming, the Festival International de Jazz de Montréal … END_OF_DOCUMENT_TOKEN_TO_BE_REPLACED

Among the many physical, spiritual, and institutional losses related to the still-ongoing pandemic is that of Los Angeles’ renowned Playboy Jazz Festival (PJF) at the … END_OF_DOCUMENT_TOKEN_TO_BE_REPLACED

It’s difficult to imagine what the stage and the audience would have looked like at Gaillard Center in Charleston, South Carolina, if Rhiannon Giddens’ new … END_OF_DOCUMENT_TOKEN_TO_BE_REPLACED