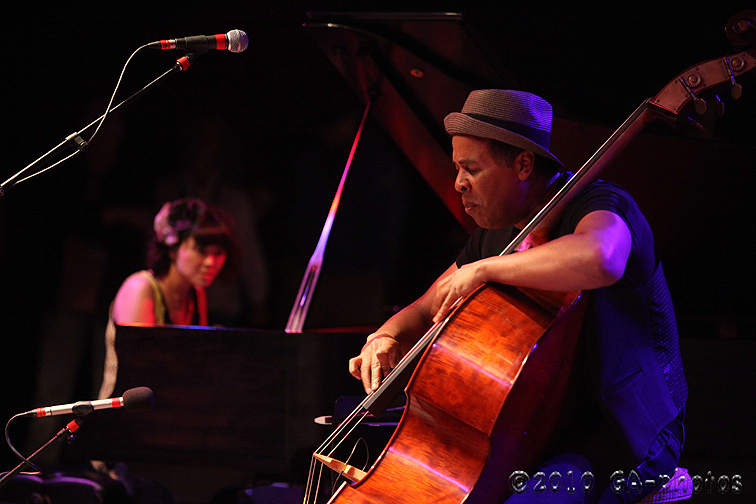 Stanley Clarke and Hiromi at the 2010 Telluride Jazz Celebration

Stanley Clarke may well be the busiest musician at the 33rd annual Montreal International Jazz Festival. As one of the festival’s “Invitation” series artists, the supremely talented bassist is leading four different groups in as many nights in Montreal.

The 60-year-old jazz icon kicked off his run in remarkable fashion on June 28-the opening night of the festival-by performing in an acoustic duo setting with 33-year-old pianist extraordinaire Hiromi at Théâtre Jean-Duceppe.

Clarke and Hiromi, of course, are quite regular collaborators. They’ve joined forces on two excellent albums: the 2009 Stanley Clarke Trio offering Jazz in the Garden (which also featured Clarke’s old Return to Forever cohort, drummer Lenny White) and 2010’s The Stanley Clarke Band (with keyboardist Ruslan Sirota, drummer Ronald Bruner Jr. and other musicians). The latter even won the 2011 Grammy for Best Contemporary Jazz Album, and one of its tracks, a performance of Chick Corea’s “No Mystery,” was nominated for that year’s Best Pop Instrumental Performance Grammy.

They’ve accomplished so much-both in the studio and onstage-that it’s easy to forget that Clarke and Hiromi have only been working together for a relatively brief time period (at least by jazz standards). The bassist would take the opportunity, early in the set at Théâtre Jean-Duceppe, to recall the first time he performed with Hiromi. The chemistry, he said, was “very good.” Fast forward a few years, however, and that chemistry is simply undeniable.

The duo’s 100-minute show was an absolute smorgasbord of individual jazz chops-amazing hand speed, dizzying runs and joyfully complex solos-delivered equally from both artists. Yet it was the sense of synergy that really made this night special.

It was there right from the very start, as the duo opened the set with a delicious run through “3 Wrong Notes,” the Jazz in the Garden cut that, Clarke explained, does indeed have three wrong notes. They followed with another exhilarating Clarke composition, “Paradigm Shift” (also from Jazz in the Garden). The duo was running on rocket fuel by the time the players called up the Irving Berlin standard “How Deep Is the Ocean?,” but then Clarke would leave the stage and let Hiromi do her amazing solo bit, which always leaves listeners drop-jawed.

And count Clarke among that number. After watching Hiromi blowtorch the keys, as well as the standing ovation that followed from the crowd, the bassist only had one thing to say: “Wow!”

Clarke, however, is no slouch when it comes to mesmerizing solos. His slap-happy solo, which utilized both the body and the strings of the bass, drew another standing ovation from the crowd.

In all, it was a great start to Clarke’s “Invitation” run. He’ll follow his Hiromi date by performing three more Montreal Jazz gigs: with the Harlem String Quartet on June 29; in the bass super-group SMV with Marcus Miller and Victor Wooten on June 30 (which, by the way, will be Clarke’s 61st birthday); and in the Stanley Clarke Band on July 1.

Among the many physical, spiritual, and institutional losses related to the still-ongoing pandemic is that of Los Angeles’ renowned Playboy Jazz Festival (PJF) at the … END_OF_DOCUMENT_TOKEN_TO_BE_REPLACED

It’s difficult to imagine what the stage and the audience would have looked like at Gaillard Center in Charleston, South Carolina, if Rhiannon Giddens’ new … END_OF_DOCUMENT_TOKEN_TO_BE_REPLACED

“It’s time to imagine a place where we can come together,” Danilo Pérez said from the hallowed stage of Washington, D.C.’s historic Sixth & I … END_OF_DOCUMENT_TOKEN_TO_BE_REPLACED

At the Zeiders American Dream Theater in Virginia Beach, Va., between April 8 and 10, the Vocal Jazz Summit convened in person for the first … END_OF_DOCUMENT_TOKEN_TO_BE_REPLACED