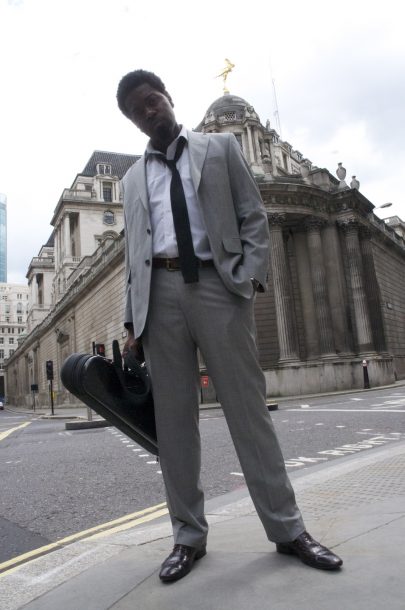 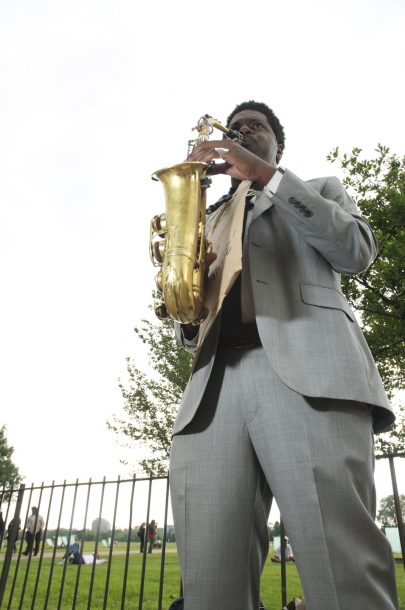 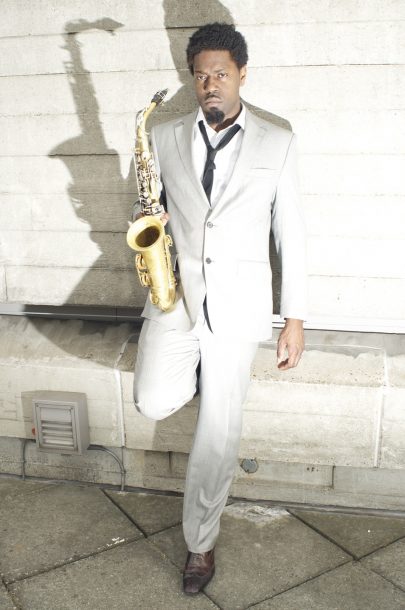 Soweto Kinch, Britain’s hottest young jazz musician, delivered one of the most entertaining and provocative shows of the London Jazz Festival. His show was hosted in the laid-back, cavernous surroundings of the Albany, a thriving arts center buried deep inside Deptford, in southeast London.

The brilliant alto saxophonist, in his early thirties, was flanked by bassist Karl Rasheed-Abel and drummer Graham Godfrey. Behind the bare stage and chordless trio, a massive projection screen displayed scenes from another age: slaves, cotton, colonialism, oppression, the dusty South. The black-and-white footage, however, was wrenched vitally into the present by Kinch’s musings, raps and compositions. Social justice was the night’s central theme: the “Occupy” protests and a healthy smattering of banker-bashing recurring topics. But the age-old jazz themes of exploitation, injustice and poverty-lapped up by the predominantly white, middle-class audience that had graced for the evening this predominantly poor, ethnically diverse neighborhood-were more than mere rabble-rousing leftie babble, and added further depth to Kinch’s progressive music.

His diverse, often harmonically spartan, material reinforced his message of austerity. His new tunes draw on his original blueprint of post-Ornette hard bop with occasional forays into hip-hop, his vertigo-inducing changes in style and genre lurching from complex polyrhythms to easy swing. Kinch, a Brummie, is quite the showman and proved himself again a talented MC, overflowing with tongue-in-cheek rhymes, ambitious freestyling wit and scathing tirades against consumerism and celebrity culture, at its most pointed in “Trying to Be a Star.” The band’s setlist-occasionally bolstered by samples and a delay unit-was exciting and unpredictable, but offering few compromises for the casual listener. Bass and drums melded seamlessly, with eloquent solos from both players.

The bulk of the pieces were lifted from Kinch’s latest record The New Emancipation, his third album, four years on from his debut A Life in the Day of B19: Tales of the Tower Block. His tremendously energetic set expanded on his latest work: “An Ancient Worksong,” a compelling fusion of Sun Ra and soulful saxophonist Oliver Nelson; the breathless, exhilarating “A People With No Past”; the slower “Suspended Adolescence,” which Kinch dazzled with some imaginative soloing. One of the highlights of the show was “Freedom.” During its linguistically acrobatic climax, Kinch freestyled using a variety of words shouted out by his increasingly febrile audience. In the wake of this exuberant finale, it’s hard to think of another player in the U.K. scene capable of conjuring up a more convincing, engaging and provocative mix.

Among the many physical, spiritual, and institutional losses related to the still-ongoing pandemic is that of Los Angeles’ renowned Playboy Jazz Festival (PJF) at the … END_OF_DOCUMENT_TOKEN_TO_BE_REPLACED

It’s difficult to imagine what the stage and the audience would have looked like at Gaillard Center in Charleston, South Carolina, if Rhiannon Giddens’ new … END_OF_DOCUMENT_TOKEN_TO_BE_REPLACED

“It’s time to imagine a place where we can come together,” Danilo Pérez said from the hallowed stage of Washington, D.C.’s historic Sixth & I … END_OF_DOCUMENT_TOKEN_TO_BE_REPLACED

At the Zeiders American Dream Theater in Virginia Beach, Va., between April 8 and 10, the Vocal Jazz Summit convened in person for the first … END_OF_DOCUMENT_TOKEN_TO_BE_REPLACED