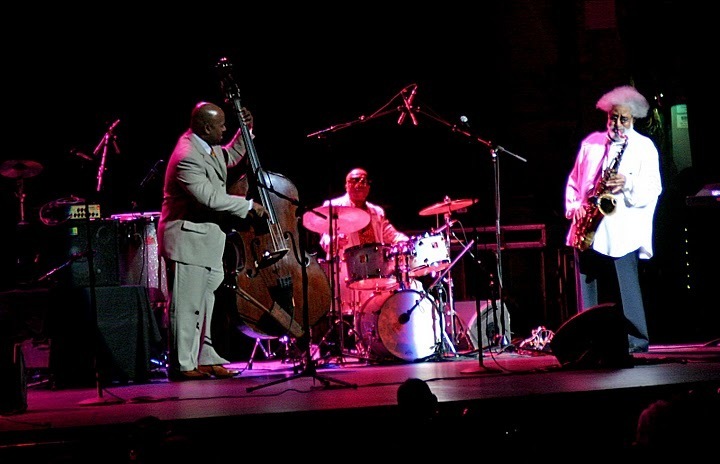 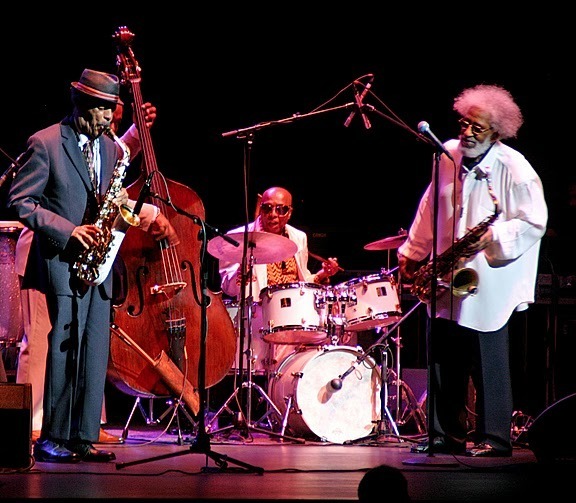 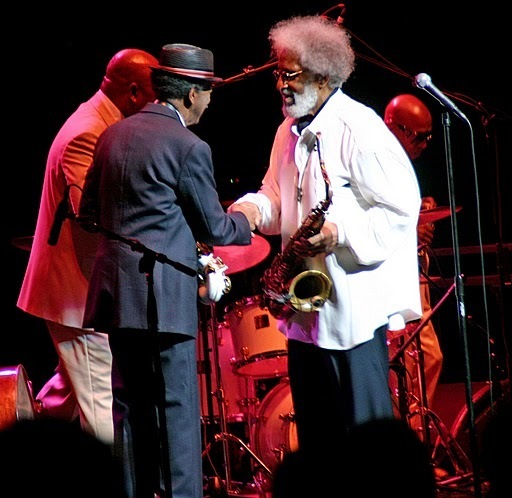 Ornette Coleman with Sonny Rollins in performance at Beacon Theatre 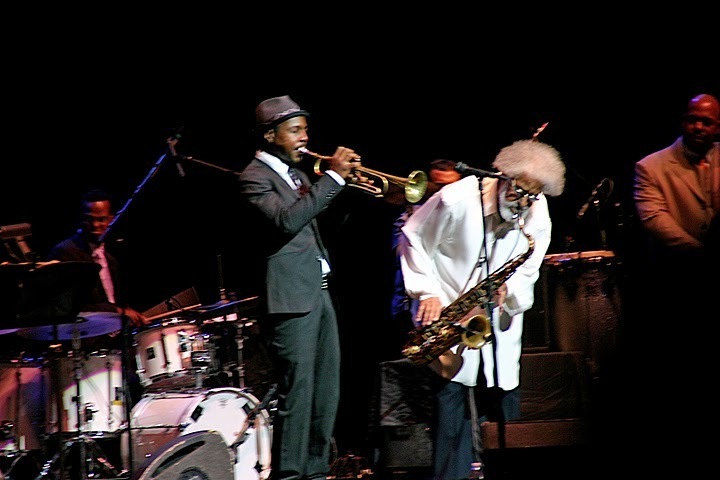 Roy Hargrove and Sonny Rollins in performance at Beacon Theatre

“History in the making” is the atmosphere that surrounds pretty much all of tenor saxophonist Sonny Rollins’ performances. Over the last four decades, thanks to the savvy of his late wife and manager, Lucille, Rollins has been presented exclusively within the expansive and prestigious contexts his playing deserves. In and out of jazz, a Rollins performance is considered an essential experience; the standard line in preview blurbs goes something like, “Don’t miss this chance to witness jazz’s greatest living improviser,” and you’d be in the minority to argue with the designation.

Rollins’ performance on Friday night, a two-hour tour de force at the Beacon Theatre on Manhattan’s Upper West Side, eclipsed its own considerable hype, and seemed to overshadow similarly touted Rollins shows-for one, the saxophonist’s return to Carnegie Hall, with bassist Christian McBride and drummer Roy Haynes, in 2007. It included one road in particular we’d never traveled down before, and might never again. It gave the sold-out crowd bragging rights to last a lifetime.

In the days and weeks leading up to the performance, the plan was well circulated. This would be a fete to honor Rollins’ 80th birthday, which the saxophonist celebrated on Sept. 7, and would include performances by Rollins’ band as well as special guests McBride, trumpeter Roy Hargrove and guitarist Jim Hall. All that was delivered on, but there was more.

Rollins’ band here included guitarist Russell Malone, bassist Bob Cranshaw, drummer Kobie Watkins and percussionist Sammy Figueroa, and the quintet limbered up with the modal, vamping “Patanjali,” an as-yet-unrecorded Rollins original with plenty of room for extended thematic improvisation (and, on this night, a bit of “Yankee Doodle”). The saxophonist-in an untucked, oversized white button-down, slacks and shades, his gray Afro bursting out in a mad-scientist frenzy-asserted his preeminence over that tune and the next, the prescient calypso “Global Warming.”

This newer recasting of the Rollins working band sounded terrific. The saxophonist had for years employed an excellent, heartily swinging guitarist in Bobby Broom, but Malone’s poise and facility in that post-Wes, post-Benson style of jazz guitar went unmatched. (His sheer ownership of the instrument was something akin to the way Christian McBride handled his bass later.) And Watkins and Figueroa congealed impressively, Figueroa falling back into Rollins’ fold easily, demonstrating his deep experience bolstering and interacting with the saxophonist’s flights. (It’s rare to see a saxophonist, outside a proper Latin-jazz band, pay so much attention to his conguero.)

The first of the special guests was Roy Hargrove, who dressed with his usual flair for melding classic and contemporary, in a fedora, a natty suit and Nike sneakers. There was a ballad feature for flugelhorn, Ira Gershwin and Vernon Duke’s “I Can’t Get Started,” and a swinging workout, Billy Strayhorn’s “Rain Check.” There was also a great deal of empathy and exchange, Rollins underscoring Hargrove’s melody lines and the pair exchanging uptempo phrases in a way that demonstrated real listening.

Hargrove left and Jim Hall, who performed with Rollins for the first time in nearly two decades at a Vermont festival in June, joined the saxophonist for “In a Sentimental Mood.” The 79-year-old guitarist was out of tune, tweaking the machine heads of his hollowbody throughout a masterful if reticent chord-melody introduction that was marred by nagging dissonances. At a faster clip, problems of intonation were less noticeable: namely on a read of “If Ever I Would Leave You” that conjured the early ’60s with a seamless blend of swing and samba rhythm. Hall’s playing was, as always, a marvel of sensible yet surprising design, full of single-note lines that capitalized on the tune’s harmony at every turn, and chordal improvisation that moved as fluently as those single-note runs.

Following Hall’s departure, Christian McBride and unannounced guest Roy Haynes began the strolling-trio portion of the evening, McBride playing Ray Brown to Haynes’ Shelly Manne on a loping “Solitude.” Alone and together, the sound these men made was, in a word, deathless; unparalleled poise and command, from the bassist’s muscular and melodic rubato intro through Haynes’ boisterous, fractured solo, which had little to do with the tempo or the tune but was welcome anyway.

The second trio tune was Rollins’ blues “Sonnymoon for Two,” which Haynes swung expertly. Then came an announcement from Rollins: A mystery person with a horn was backstage and wanted to wish the master a happy birthday. Rollins, facing stage right, blew chorus after chorus in anticipation, or, rather, to stall. (There are worse ways to spend idle time.) The guest ended up being Ornette Coleman, who, in suit and hat, walked slowly and carefully toward the front of the stage while a wave of surprise-shock, even-fell over the audience. It was a rarity on many fronts, among them hearing Coleman and Rollins on the same bandstand, which, to my knowledge, is a first; and hearing Coleman’s tart, blues-drenched wailing over Haynes’ beautifully raw yet more formal brand of swing. (The hookup evoked the free-jazz icon’s Atlantic and Blue Note recordings rather than his albums featuring son Denardo.)

Coleman did soon enough make the music his own. Rhythms and basslines got straighter and moved more urgently, as the alto saxophonist blew curt moans and repeated variations on one descending motif. Rollins suddenly had less to do with the rhythm section during his spotlight, both temporally and harmonically. There wasn’t a great deal in the way of interaction, but the two saxophonists did take the tune out, Coleman squealing.

The encore, which featured all of the evening’s participants sans Coleman, was inevitable: “St. Thomas.” Hall was given ample room to stretch out, and summoned up his playing on Rollins’ 1962 quartet recording of another calypso favorite, “Don’t Stop the Carnival.” The saxophonist, who moved onstage in his seesawing saunter, again volleyed phrases with Hargrove, and the merriment snowballed.

Jazz’s greatest living improviser, yes, and also a first-rate entertainer: The whole program was so much fun it often felt like Rollins was leading a funk band, or was channeling his inspiration Louis Jordan. (Ornette Coleman and Roy Haynes or not, that’s Rollins’ show on any given night.) Earlier the saxophonist had given a shout-out to jazz itself, calling the art form “the king of all musics” in his kind, weathered voice. That would make Rollins the king of all jazz musicians, I suppose.

The 2022 Newport Jazz Festival’s three days of sunshine were bracketed, more or less, by a pair of all-star ensemble jams that included Christian McBride. … END_OF_DOCUMENT_TOKEN_TO_BE_REPLACED

In its first full edition since the onset of the pandemic, and with a new director of programming, the Festival International de Jazz de Montréal … END_OF_DOCUMENT_TOKEN_TO_BE_REPLACED

Among the many physical, spiritual, and institutional losses related to the still-ongoing pandemic is that of Los Angeles’ renowned Playboy Jazz Festival (PJF) at the … END_OF_DOCUMENT_TOKEN_TO_BE_REPLACED

It’s difficult to imagine what the stage and the audience would have looked like at Gaillard Center in Charleston, South Carolina, if Rhiannon Giddens’ new … END_OF_DOCUMENT_TOKEN_TO_BE_REPLACED