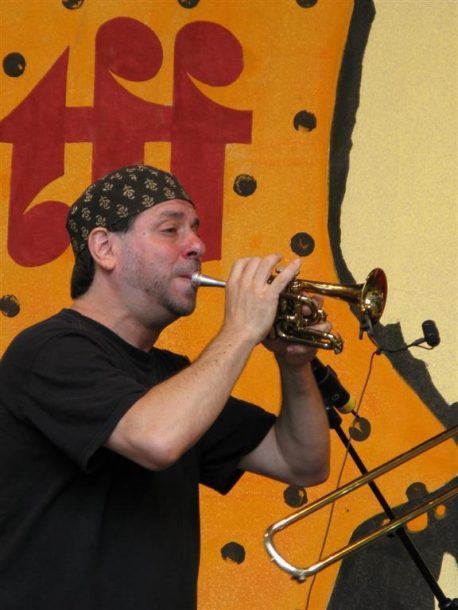 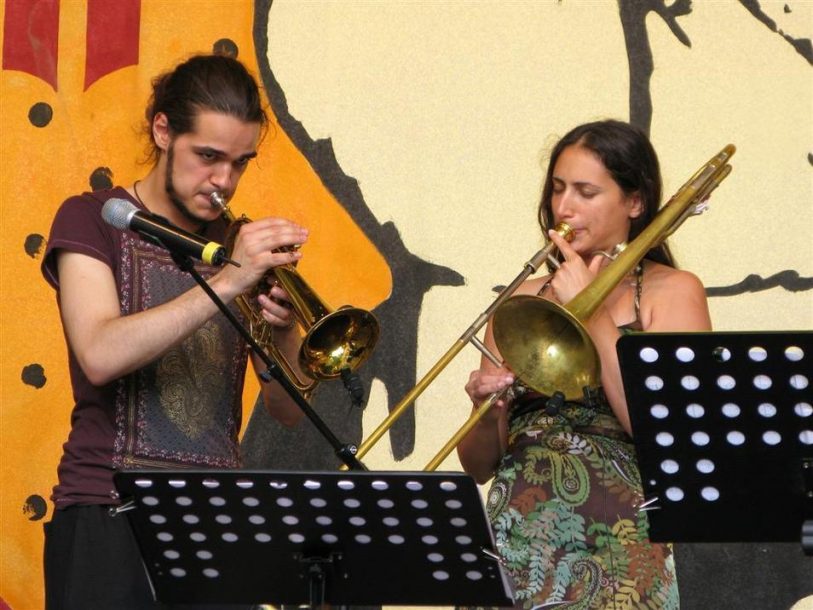 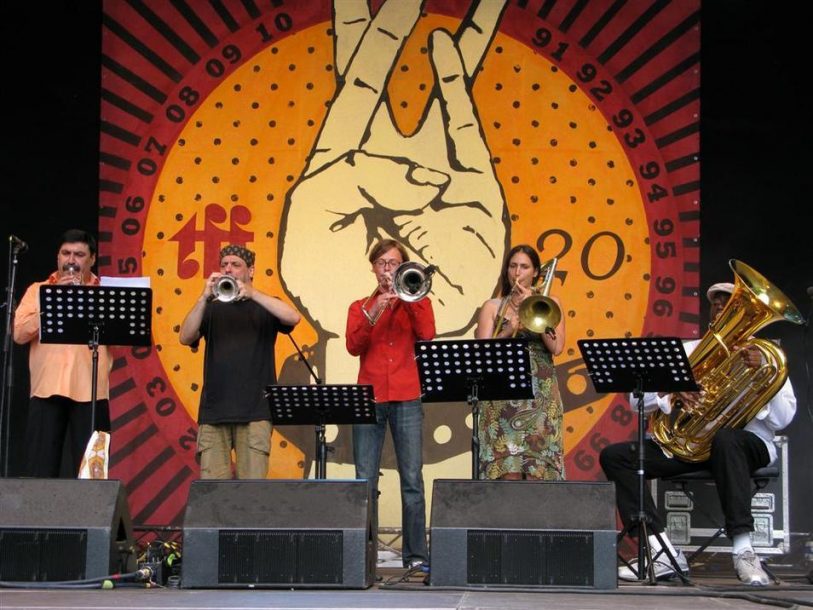 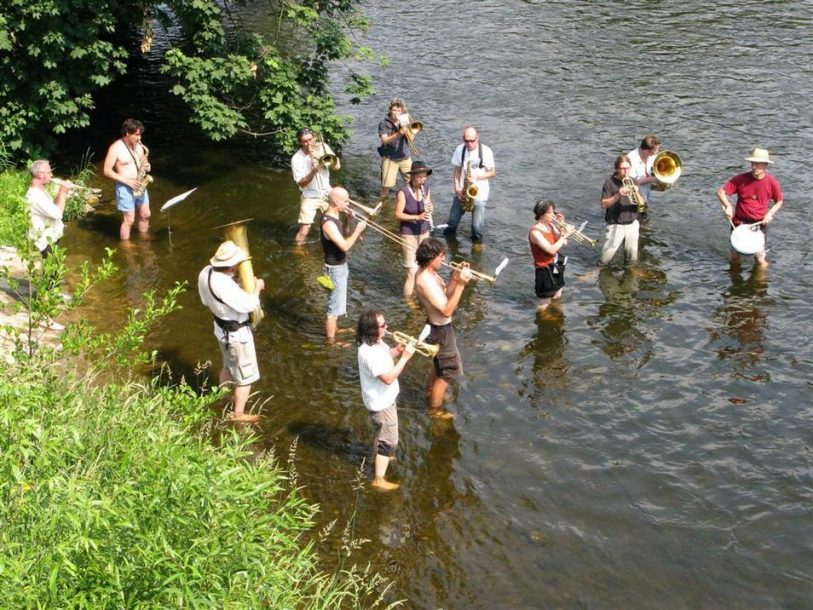 A jazz band playing in the river Saale 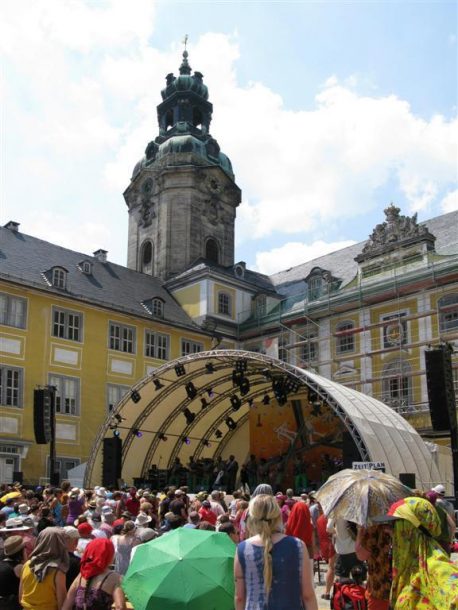 Stage in the courtyard of Castle Heidecksburg

Have you ever listened to a joint concert of a German jazz keyboardist and a kora master from Gambia? Or heard American folk blues songs accompanied by a Chinese sheng (a mouth organ) and Siberian mouth drums? Or seen bagpipers from Scotland, Austria, Hungary, France, Spain, Latvia and Iran, supported by the wild rhythm of bongos? These concerts were so thrilling that I got goose-pimples right on those hot summer days when temperatures were around 80°F. Since then, the TFF (or Roots Folk World Music Festival – the festival’s official name in English) in Rudolstadt, Germany, has become a fixed date in my diary.

Every year on the first weekend of July – to be exact, from Friday, 6 p.m. to Sunday midnight – you can hear world music and get in touch with cultures from all around the globe. The 1235-year-old Thuringian town of 24,000 inhabitants invites up to one thousand artists and musicians from about forty countries and hosts more than 70,000 folk, jazz and world music fans from Germany and its neighboring countries.

Always being a highlight of the festival, this year’s Magic Concert was dedicated to trumpet-like instruments. The Americans Frank London, playing trumpet and flugelhorn, and Jon Sass at the tuba, the trumpet players Adam Stinga from Moldavia, Gustav Hylen from Sweden, Hans Kennel from Switzerland and Paplo Giw from Iran, the German trombonist Andreas Uhlmann, the female trombone player Reut Regev from Israel as well as her percussionist Igal Foni and Mirek Pyschny from Poland on drums met only one week prior to the festival to create a unique concert, which put a spell on the audience and over the market square, where several broadcast stations reported live from Rudolstadt.

The festival presented bands and musicians from all parts of the world playing funk, hip-hop, flamenco, reggae, salsa and Creole zydeco music and featured German, English, and Scandinavian folk songs. Several bands from Ethiopia performed a mix of jazz and traditional tunes, Ebo Taylor introduced his new band from Ghana and the Woodstock veteran Arlo Guthrie gave a concert in the courtyard of Rudolstadt’s Castle Heidecksburg, accompanied by the local symphony orchestra.

Every year, you will find something new, even a jazz band playing in the river Saale, cooling down their feet and instruments, when it’s too darn hot under the burning summer sun. You might also listen to Chinese lute players or Tuvan overtone singers, hear African dessert blues from Mali, or watch some stomping and jingling Morris-dancers from England, powerful drummers from Burundi, fiery conga players from Venezuela, graceful dancers from Bulgaria, or aborigines with their didgeridoos from Australia – to name just a few of about two hundred seventy performances that take place on more than twenty small and big stages, scattered all over town, from 10 a.m. until far after midnight.

On the Street of Instruments, you can buy bongos, piccolos, guitars, or fiddles. You may try panpipes, accordions, and other German and foreign instruments. You can also look for CDs and old records at the stalls or browse through numerous books about folk and world music. Children enjoy building huts from mud and willow rods, making summer hats from paper, watching performances of a puppets theater or playing games at their Kinderfest (children’s party) in Heinrich Heine Park.

When you get thirsty and hungry from the hustle and bustle of the festival, you can have a steak or a genuine Thuringian sausage, grilled over a charcoal fire, or exotic cuisine from Turkey, India, and other countries of the world. And of course, you should not miss a swig of Thuringian beer with new friends and drink to the charm and hospitality of Rudolstadt and its annual festival of world music.

For more information, go to the Rudolstadt web site.

“It’s time to imagine a place where we can come together,” Danilo Pérez said from the hallowed stage of Washington, D.C.’s historic Sixth & I … END_OF_DOCUMENT_TOKEN_TO_BE_REPLACED

At the Zeiders American Dream Theater in Virginia Beach, Va., between April 8 and 10, the Vocal Jazz Summit convened in person for the first … END_OF_DOCUMENT_TOKEN_TO_BE_REPLACED

The Big Ears Festival returned to Knoxville in a big way in late March, drawing an estimated 30,000 music enthusiasts from across the U.S. and … END_OF_DOCUMENT_TOKEN_TO_BE_REPLACED

Let’s get this out of the way: The Savannah Music Festival is not a jazz festival. Held over the course of 17 days in late … END_OF_DOCUMENT_TOKEN_TO_BE_REPLACED