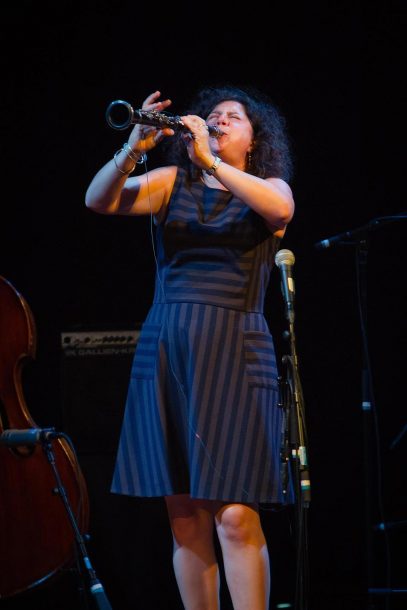 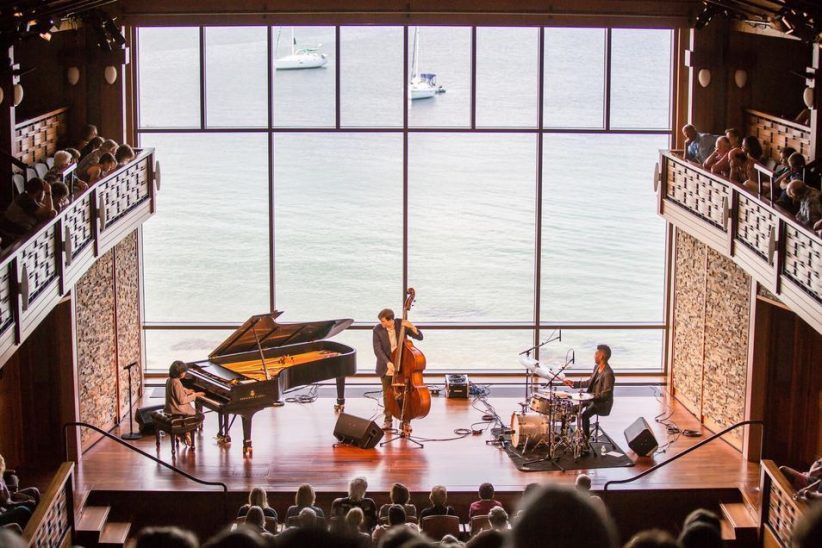 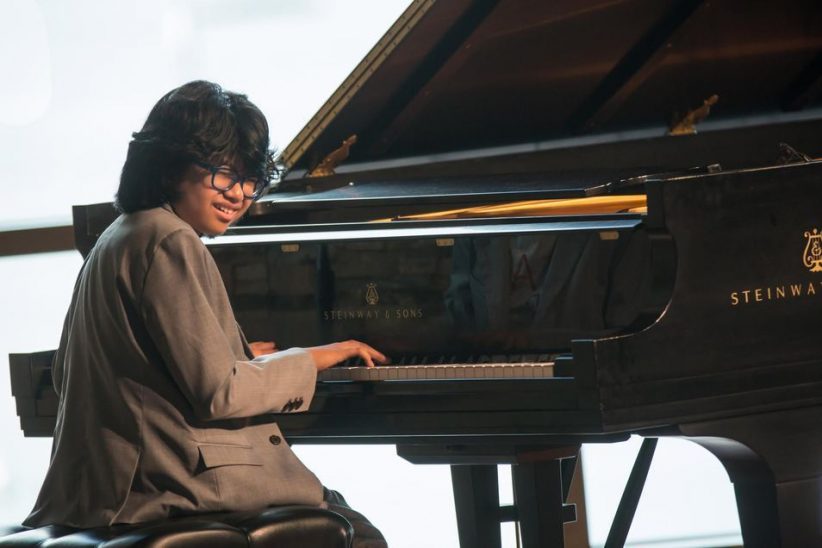 The arty seaside town of Rockport, about an hour north of Boston on Massachusetts’ Cape Ann, hosted its fourth annual Rockport Jazz Festival this past weekend, with performances by six Newport-worthy headliners in separate shows over four days at the exquisite 5-year-old, 330-seat Shalin Liu Performance Center. The Shalin Liu looks relatively unassuming from Main Street-one could mistake it for a spiffy new B&B-but inside it’s state-of-the-art, renowned regionally for its excellent acoustics and the spectacular view of Rockport Harbor.

At Newport, the audience faces the main stage and the musicians get the view. At Rockport that’s reversed, and it produced a couple of memorable moments during the three festival performances I saw. As 12-year-old piano prodigy Joey Alexander and his trio played his Spanish-tinged tune “City Light” on Saturday afternoon, three paddle boarders inched their way tranquilly through the water in the distance behind. The next day, guitarist Julian Lage was startled as a seagull suddenly shot past the window, yet he somehow continued his solo on his trio’s “Stop, Go, Start” without missing a beat. The curtains were drawn on the ocean view for Anat Cohen’s performance with her quartet that night, for which she apologized, explaining it was done for acoustical reasons.

The music was what people were there for, after all, and that was even more memorable than the view. Alexander’s two trio mates, Dan Chmielinski on bass and Mark Whitfield Jr. on drums, were both fresh-faced and impressive themselves. Their several solos earned appreciative applause, they backed Alexander beautifully, and Whitfield’s frequent smiling at Alexander’s responses to his drum accents suggested that he was as knocked out by the pianist’s precociousness as the audience was. I brought my two sons with me to the Alexander set, figuring it was a chance for them to be dazzled by someone barely older than they are. One of them suggested on the ride up that maybe Joey would be great for a kid but not so great compared to grownups. Not so. Alexander was fully in charge as he led the trio through a program of Coltrane, Shorter, Monk, Strayhorn and Rodgers and Hart, and two pieces of his own. At a couple of points he rose from the piano bench while playing, whether out of inspiration or to better see both of his bandmates over the top of the Steinway grand.

Alexander’s technical skills were indeed impressive. But how does someone his age access the emotions underpinning the standards “My Funny Valentine” and “Lush Life” the way he did in Rockport that day? My 11-year-old leaned over late in the set and whispered that he liked Alexander’s own “Sunday Waltz” best of what he’d heard thus far. I was more partial to the Monk tune that followed it, “I Mean You,” which the young pianist managed to keep very recognizably Monk (throwing in a quote or two from other Monk tunes for good measure) while taking his own approach to the material. But the whole set was strong, and it earned Alexander an encore. “I’ll think of something,” he told the audience, returning to the stage alone, and he sat down and played an appealing version of the sad-luck standard “Everything Happens to Me.”

Julian Lage, whose show followed on Sunday afternoon, was a prodigy himself not so long ago. But he’s 27 now, and the trio he drove up with from New York included veterans Scott Colley on bass and Billy Mintz on drums. Lage recently recorded a trio album with Colley and Kenny Wollesen, due out sometime next year, and had also gotten to know Colley in Gary Burton’s New Generations Quartet. Mintz was subbing for Wollesen, as he had done the night before in Woodstock, N.Y., and Lage predicted in his pre-show “JazzChat” with concertgoers (all the headliners save Alexander participated in one) that Mintz would nudge the performance toward the avant-garde. That proved especially so on the aforementioned piece with the anticipated seagull cameo, “Stop, Go, Start,” which opened with unorthodox bowing by Colley that became richer and more classical-sounding as the others joined in. The piece was free enough to seem composed collaboratively on the spot, but nonetheless went over well with an audience whose subscriber base is more accustomed to the classical chamber music the Shalin Liu was primarily built for.

That may have been in part because the audience had already been loosened up by the more conventional musicianship on Spike Hughes’ “Nocturne,” Charles Lloyd’s “Island Blue” and Lage’s own “40’s,” which, like “Roland” later in the set, was adapted for trio from Lage’s recent solo-guitar album World’s Fair. Mintz drummed impressively throughout the set, which also included modernist takes on the classics “I’ll Be Seeing You” and W.C. Handy’s “Harlem Blues,” occasionally dispensing with sticks to play the drum heads with bare hands and generally keeping his gaze fixed downward at his kit. Lage and Colley, by contrast, frequently played with their eyes locked, or with Colley’s fixed on Lage’s guitar frets. Their musicianship was as remarkable as their rapport. Lage’s guitar work was as phenomenal as ever, but though he was the bandleader he didn’t hog the limelight. That gave Colley ample room to shine, and to make one wonder why he doesn’t fare better in various critics’ polls.

Lage took an encore, too, choosing Gus Kahn and Neil Moret’s “Persian Rug.” “The lyrics are really weird, borderline racist,” he told the audience. When Colley raised his eyebrows at this, Lage told him, “You can Google it later.” They played it uptempo, with some great walking bass from Colley, and some of Lage’s most impressive guitar work of the afternoon, the tune wrapping up with a splendid solo by the generally coolly understated Mintz.

Joining clarinetist and saxophonist Anat Cohen was the crack quartet with whom she recorded her recent albums Luminosa and Claroscuro, from which all the tunes she played that night were drawn. These included three pieces by Milton Nascimento (“Lilia,” “Tudo que você podia ser” and “Cais”-the lattermost, which she translated as “Harbors,” being especially suited to the oceanside setting), Flying Lotus’ “Putty Boy Strut” and Pixinguinha’s rapid-fire choro standard “Um a Zero,” as well as her own “In the Spirit of Baden” (for the great Brazilian guitarist Baden Powell), “Happy Song” and “Ima.” She explained that Ima is Hebrew for “mom,” and one imagined “Lilia,” written by Nascimento for his mother (it had no lyrics, Cohen told us, because Nascimento said mere words could not describe his mother), had inspired Cohen to compose her beautiful, poignant piece for her own.

The music varied in emotional content, but the whole band was killer on all of it. Joe Martin had some strong solos, but mostly held things together on bass. Daniel Freedman played his drums barehanded even more than Mintz had that afternoon, but was vigorous and precise with the sticks when he held them, memorably propelling “Cais” to its climax, among other highlights. Jason Lindner juggled piano, Fender Rhodes and synthesizer, and was wildly inventive on all of them, his surprises more than once causing Cohen to laugh in appreciation. For her part, Cohen displayed the chops that earned her the 2015 Jazz Journalists Association Award for best clarinetist, presented during her concert’s intermission, and played tenor and soprano sax to boot, on “Cais” and “Tudo que você podia ser,” respectively. Their encore was a piece Cohen told the audience it would recognize, which turned out to be “La Vie en Rose,” made famous by Édith Piaf.

I didn’t manage to see the entire festival, which opened on Thursday with Mikarimba (Mika and Richard Stoltzman on marimba and clarinet, Steve Gadd and his son Duke on drums, Shin Sakaino on bass, John Tropea on guitar), featured vocalist Alicia Olatuja on Friday and followed Alexander on Saturday night with trumpeter Sean Jones’ straight-ahead quartet. But I did take in more than enough to be impressed by both the setting and the music on offer.

For years, the Pittsburgh International Jazz Festival (PIJF) took place on the street. Over one weekend in June, Downtown thoroughfares Penn Avenue or Liberty Avenue … END_OF_DOCUMENT_TOKEN_TO_BE_REPLACED

The mood was understandably festive as John Fedchock’s New York Big Band took to the stage at Birdland on Sunday, September 18. Not only was … END_OF_DOCUMENT_TOKEN_TO_BE_REPLACED

Considering the lineup—stacked with talent—and the musician to whom they were paying their respects—a cult figure, rightly or wrongly—the New York City live tribute to … END_OF_DOCUMENT_TOKEN_TO_BE_REPLACED