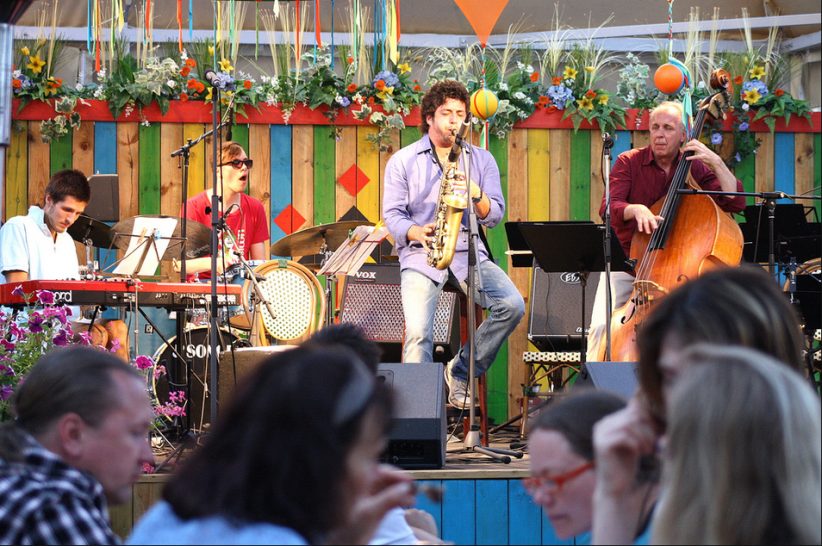 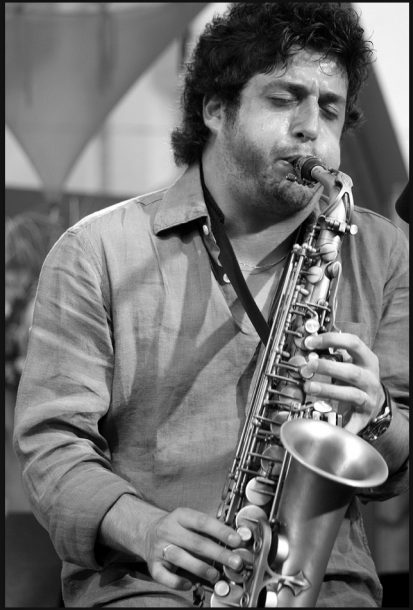 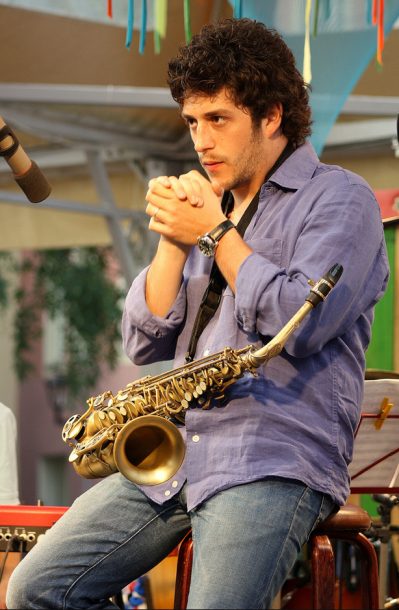 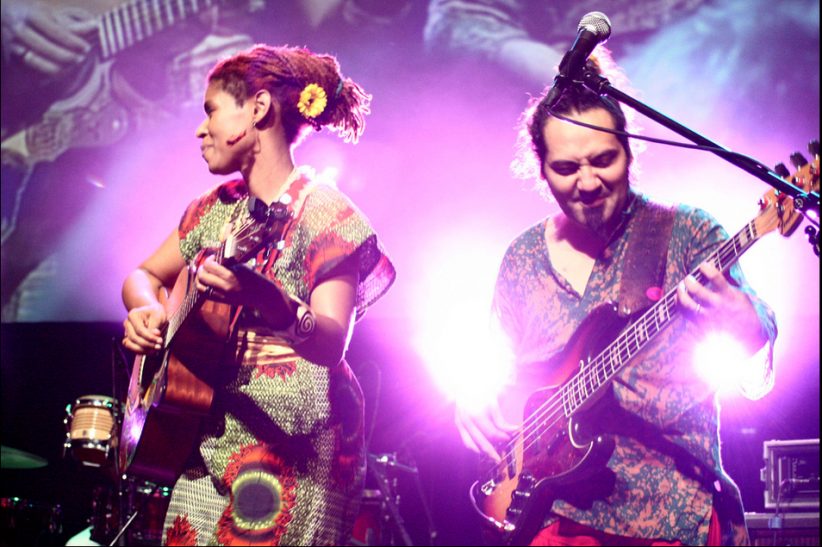 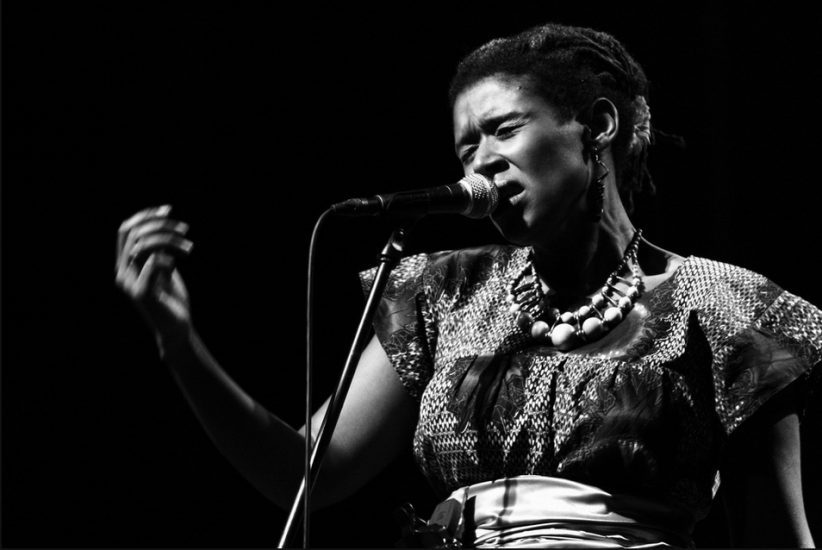 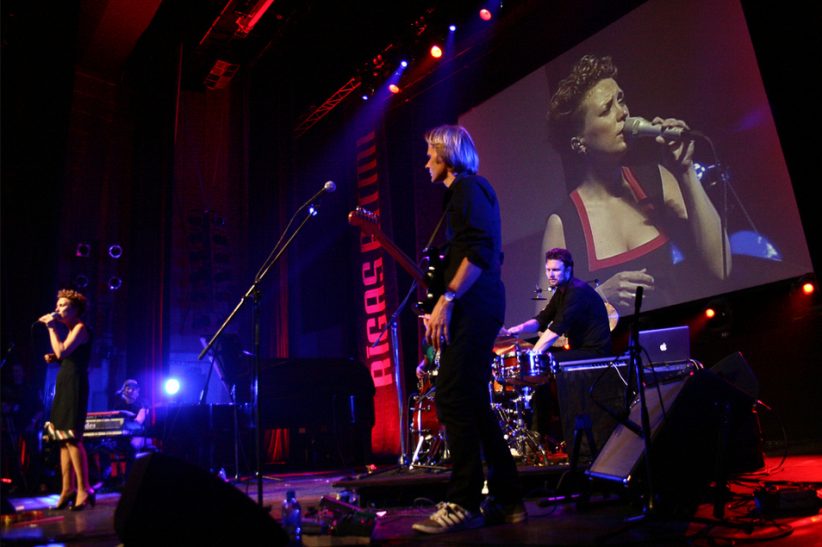 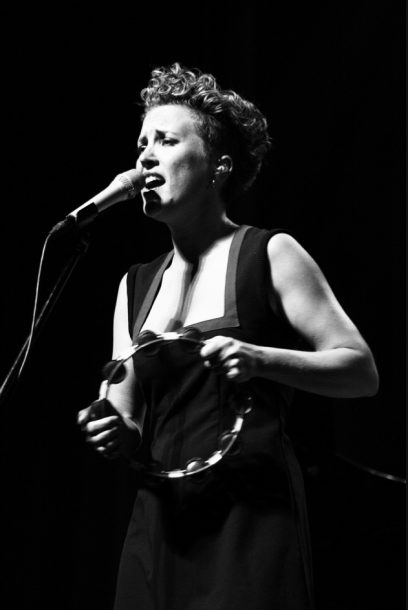 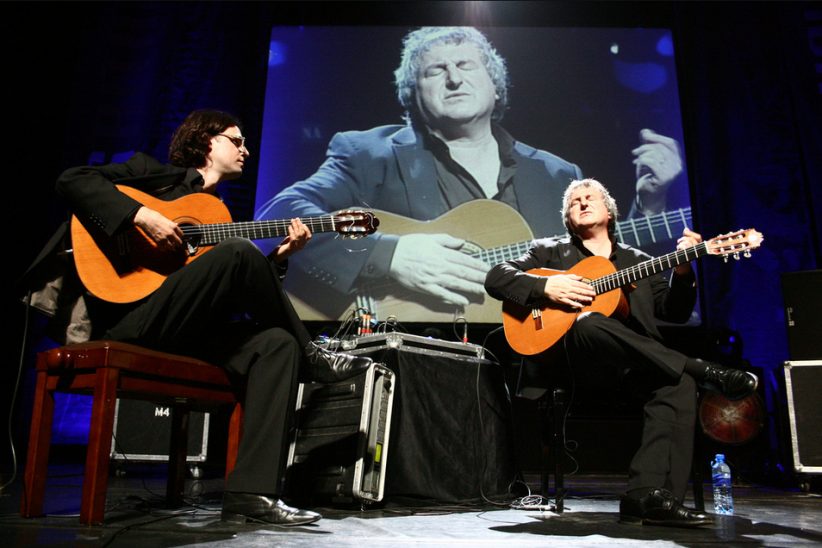 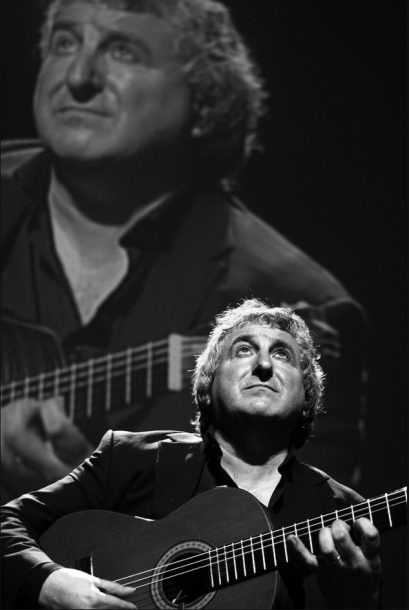 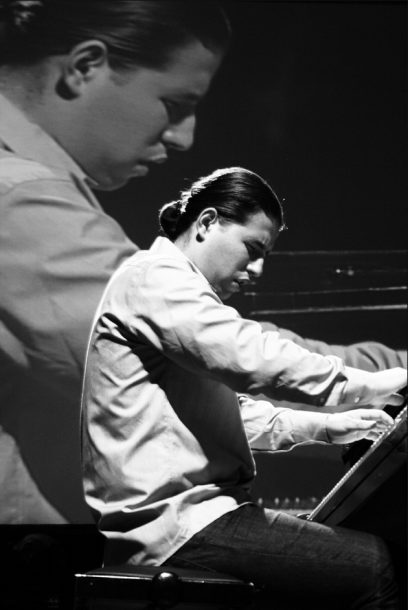 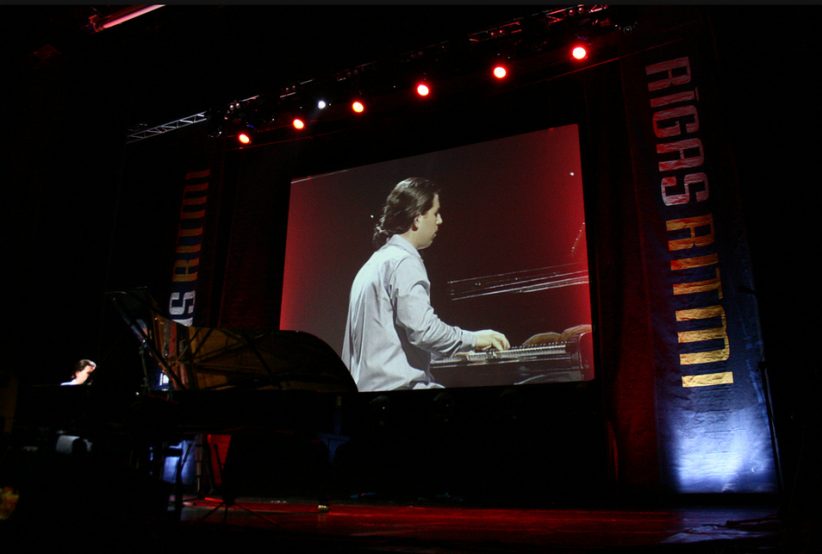 As a tourist destination, Riga, Latvia is pretty much off the grid. But in high summer the city is an idyll. There are deep green manicured parks with canals winding through them, on which slow rowboats barely leave a wake. Other European cities have twisting cobblestone lanes and dramatic skylines with the spires and domes of medieval churches. But only in Riga can you look up from almost any sidewalk and be startled by huge gargoyles and grotesque staring faces hanging off the sides of buildings. Riga is the Art Nouveau capital of Europe. It is a Unesco World Heritage city and a lovely backdrop for a music festival. Rigas Ritmi (“Riga Rhythms”) took place there from June 30 to July 2, 2011.

Artistic Director Maris Briezkalns points out that Rigas Ritmi, now in its eleventh year, has never billed itself as a jazz festival. “We don’t need to put a label on it,” he says. He believes that the festival’s primary mission is to “build a public” for jazz in Latvia. He also believes that assembling a festival program is “like painting a picture, like pointillism. From many parts and details, hopefully there is finally a whole, with its own identity. We try to make the best program we can, with the best musicians we can afford, with the variety to appeal to as many people as possible.”

In 2011 the program included several artists who are outside the jazz genre but who partake of the jazz sensibility. If the word “jazz” does not appear in the festival’s name, the Latvian word for “rhythms” does. The festival’s rhythms included intricate, physically affecting Cape Verdean pulsations from singer Carmen Souza, exotic flamenco ragas from guitarist Eduardo Niebla and addictive ambient grooves from the Norwegian art/pop band, Beady Belle. The program also included pop-jazz from Till Brönner. By “appealing to as many people as possible,” the festival can expose its audience to world-class jazz improvisers like Alfredo Rodriguez and Francesco Cafiso, who each gave knockout performances at this year’s festival.

Another goal of the Riga festival is education. Latvia was an occupied country from 1941 to 1991, first by Nazi Germany, then by the Soviet Union. Briezkalns, who is also a first-call jazz drummer in Riga, says that when Latvia became independent in 1991, many of the best local jazz musicians, who were suddenly free to leave, did just that. It created a void. “Many of our best leaders and teachers emigrated, and we had no schools for jazz. I knew that we had to do something for young musicians.” His first efforts, 16 years ago, involved a program of jazz camps and workshops and competitions that continues to this day. The Rigas Ritmi festival started in 2001. An essential component of every festival is a series of master classes and workshops conducted by festival artists.

Eduardo Niebla, originally from Spain, is now based in the U.K. On opening night he played the Riga Congress Centre, a classy 1200-seat venue on a square with a fountain, just over a canal from the Old Town. His trio included second guitarist Carl Herring and tabla percussionist Dharmesh Parmar. Their music was a unique heady blend including flamenco, Latin, classical, Indian, Arabic and jazz ingredients. It was a lush guitar choir with a high-revving Indian tabla motor in the middle. Niebla is a heart-on-sleeve romantic, and there was a yearning poignance to his songs like “Mirror of Life,” “Rosie” (for his daughter) and “Para Margarita” (for his mother) But Parmar, with his clattering rain of propulsion, made sure that Niebla’s sentiments swung.

Singer/songwriter/guitarist Carmen Souza also stirred up a distinctive savory mixture of musical flavors. The other members of her band were bassist Theo Pascal, pianist Jonathan Idiagbonya and drummer Davide Giovannini. Souza, born in Portugal to parents from Cape Verde, sang her own songs in a voice that purred, snarled, keened and glided over wide intervals. Her sensual rhythms came from Cape Verdean forms like the batuke and the morna. Your mind did not know these rhythms but your body did. It was impossible not to move to “Africa.” Souza got a Congress Hall full of Latvians twitching in their seats and singing in Creole.

Jazz is music of the night, but in Latvia a few days removed from the summer solstice, it is not necessarily music of darkness. Every night, emerging from Congress Centre around 10:40 p.m., it was still twilight.

Of the headliners who played Congress Centre, there was only one whose contribution to Maris Briezkalns’ “pointillistic picture” was unclear. Till Brönner has an attractive, lustrous sound on both trumpet and flugelhorn, but in Riga he applied it to inconsequential, simplified music that lacked both the content of jazz and the personality of good pop. The low point was a vocal number, a pointless attempt to jazz-up the Seals and Crofts warhorse “Summer Breeze,” still a silly song after all these years. (In the spirit of full disclosure, it should be stated here that, according to the festival program, Brönner has sold more records than any other German jazz musician. There are people who like this stuff.)

Caught up in the momentum of a jazz festival, you can sometimes wonder whether jazz festivals are the best way to experience the music. There is a possibility that sheer overload can dull the senses. But at the best festivals, when you see great concert after great concert, you can get a high that happens in no other setting. The risk of including an act like Till Brönner in a festival is that the high can get blown.

There were no daytime concerts at Rigas Ritmi. Daytime was for exploring the narrow streets of Old Town, which suddenly opened into grand squares. There is an ugly black building on the River Daugava, a former Soviet bunker. The Museum of the Occupation of Latvia documents the Nazi and Soviet occupations from 1941 to 1991. A visit to this museum makes the jazz heard that evening sound different. Jazz is the music of freedom, never more than in places like Latvia. Maris Briezkalns, who became a jazz musician during the Soviet era, says “When I started playing jazz, it was not to be against something. But jazz in Soviet times was fresh air. Something new, in a place where everything was the same. For me and the people I played with, jazz was fresh air and freedom, and that has not changed.”

There has been a buzz on the street over Alfredo Rodriguez for at least a year, which is unusual since he has not yet released an album. Word has gotten out from his appearances at festivals all over the world. He was educated at several of the respected classical conservatories of Havana, and emigrated from Cuba in 2009. He has monumental chops, but for Rodriguez they are a means to communicate feeling, not an end.

For his solo concert in Congress Centre he made some conventional choices of material from Cuban composers, like “Quizas Quizas Quizas” by Osvaldo Farrés, “Veinte Años” by Maria Teresa Vera and “Guantanamera” by José Fernández. But he elaborated them into vast unconventional personal essays. “Veinte Años” was a deeply private ceremony performed in public, Rodriguez bent so low his forehead almost touched the keys. He proceeded in slow swirls from which the melody rang out as it passed. Sometimes he would catch and hold “Veinte Años” before letting it spill again. He has a sensitive, nuanced touch, and understands the value of silence in music, but he can also make the piano orchestral, as on the gigantic washes of “All The Things You Are.” Sometimes he reminds you of solo Brad Mehldau in his ability to sustain simultaneous contrasting ideas crossing between his hands. But Rodriguez is a more open-ended pianist than Mehldau, willing to include wildly divergent content into a single improvisation. The washes of “All The Things You Are” became light, rippling single-note runs that circled back on themselves and became obsessive little patterns, then dissolved into abstraction, then became loud crescendos again.

As he matures, Rodriguez will no doubt gain greater control over the flood of ideas his imagination can provide and his hands can execute. He is already capable of providing an extraordinary musical evening. His debut recording on the Qwest label is scheduled for the fall.

At 22, Francesco Cafiso has been playing jazz professionally with major jazz musicians for half his life. By 2003, when he toured Europe with Wynton Marsalis, he had attained a mastery of the alto saxophone unprecedented in the history of jazz for a 14-year-old. In Riga he played with a Baltic rhythm section that was new to him: Oskars Racevskis on electric piano and Ivars Arutjunjan on drums, from Latvia, and Toivo Unt on bass, from Estonia.

Cafiso is deeply grounded in bebop. He played in the dark intimacy of the Club Artelis on the second night. On the last night, he played outside in the Open Air Leisure Park EGLE, an impromptu beer garden spread over an Old Town square. With a cautious rhythm section, on a conservative repertoire of standards, Cafiso gave two monstrous alto saxophone recitals. His sound has always been a major source of his impact, a powerful, piercing, singing wake-the-dead cry. Now that he has attained the advanced age of 22, it is a little edgier, more comprehensive in its range of expression.

Cafiso has long had the gift of unleashing, in wave upon wave, lines that come from a song but transfigure it. Now his improvisations are bolder and freer, and his beautiful tone sometimes frays with emotion. In Club Artelis he opened with “Ornithology” and smoked it, instantly attaining a level of intensity that most jazz improvisers will never know, and that even the really good ones take a couple of sets to reach. In the noisy outdoor setting of the Old Town square, he opened with “Milestones” and killed it. He played “I’m Confessin'” and a harmless little love ditty became an epic eruption that kept fountaining and climbing.

That a player this special is not better known in the United States suggests that the Information Age is not all it is cracked up to be. Granted, Cafiso has not played in the United States since he was a teenager, and he has recorded only for Japanese and European labels. He has a new album on the Verve label coming this fall.

Rigas Ritmi ended with a surprising bang. It was surprising because a 21-piece orchestra followed Francesco Cafiso in the Open Air Leisure Park, and it was composed entirely of young musicians from Riga. It was a bang because they kicked ass. The City Jazz Big Band has been together or four years, and plays mostly original material, with charts by tenor saxophonist/bandleader Karlis Vanags and pianist Ritvars Garoza. They made a noisy milling crowd stand still and listen, or else pair off and dance. Maris Briezkalns had said that one of the goals of Rigas Ritmi and its associated educational programs is to rebuild a jazz culture in Latvia, to give jazz “a new beginning.” It is working.

“It’s time to imagine a place where we can come together,” Danilo Pérez said from the hallowed stage of Washington, D.C.’s historic Sixth & I … END_OF_DOCUMENT_TOKEN_TO_BE_REPLACED

At the Zeiders American Dream Theater in Virginia Beach, Va., between April 8 and 10, the Vocal Jazz Summit convened in person for the first … END_OF_DOCUMENT_TOKEN_TO_BE_REPLACED

The Big Ears Festival returned to Knoxville in a big way in late March, drawing an estimated 30,000 music enthusiasts from across the U.S. and … END_OF_DOCUMENT_TOKEN_TO_BE_REPLACED

Let’s get this out of the way: The Savannah Music Festival is not a jazz festival. Held over the course of 17 days in late … END_OF_DOCUMENT_TOKEN_TO_BE_REPLACED