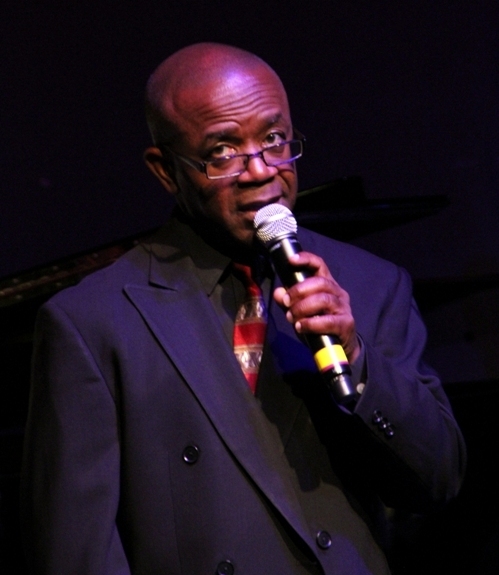 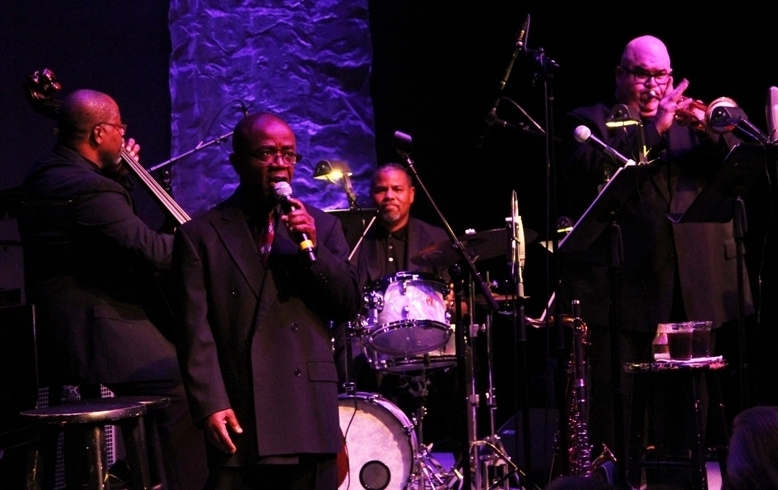 Singer Kenny Washington has been around the block musically. His love of song dates to his childhood in New Orleans’ Ninth Ward singing gospel. He honed his chops in college and a nine-year stint in a U.S. Navy Band. He has been a fixture on the San Francisco Bay-area jazz scene for more than two decades.

Artistic director Del Gatto co-leads the band with pianist Jerry Stawski. The five-year-old group’s other members are violinist Glenn Basham, bassist Kevin Mauldin and Miami-based drummer Mike Harvey. Basham happens to be concertmaster of the Naples Philharmonic, which performs next door at Artis’ Hayes Hall, and Mauldin has been a Naples Philharmonic member for 25 years.

Material from the Great American Songbook, jazz and blues standards, bossa novas and a clever cover of a classic R&B hit provided a strong introduction to this audience for Washington’s collective talents. His timing, phrasing and emotion blend well with masterful scatting (as evidenced on “I Love Being Here With You”). In the process, he brought out the best in a band of instrumentalists whom he’d only met that day.

Early in the program, performed for two separate shows totaling 450 Naples concertgoers, the band embarked on a lengthy exploration of Bronislaw Kaper’s haunting “Invitation.” In his remarks that followed, Washington said, “My ‘invitation’ came several months ago” [when Del Gatto contacted him about performing with the sextet this season]. He said he asked himself, “Who knows who I am in Florida?” It turns out that vibraphonist Joe Locke, who performed in Naples two years ago, recommended Washington, having both recorded and performed with him in a variety of East Coast and West Coast settings.

Washington’s arrangements were fine-tuned to ensure every band member got several significant solo spotlights during the 80-minute program. Del Gatto and Stawski were spotlighted on “Desafinado” and Miller’s high-octane trumpet work was particularly effective on “Just One of Those Things.” The horn section sat out when Washington and the rhythm section explored “All the Way” with some mood-enhancing violin from Basham.

Washington dug deeply into Otis Redding’s “(Sittin’ On) The Dock of the Bay,” complete with an interesting twist to the tune’s whistling segment. Washington started the whistling for several bars, then Basham took over, emulating his sound on strings. It was very effective. The evening closed with a spirited all-hands-on-deck romp through Sonny Rollins’ “Oleo.”

The diminutive singer, who stands about 5’3″, has only one CD as a leader, 2008’s Live at Anna’s Jazz Island. But he has been featured on Locke’s 2010 recording For the Love of You and three CDs by Bay Area tenor saxophonist Michael O’Neill, most recently 2014’s New Beginnings.

The Naples sextet’s concert series will feature trombonist Robin Eubanks on December 16, guitarist Joe Cohn on January 6, singer Carmen Lundy on February 17, flutist Hubert Laws on March 9 and cornetist Warren Vaché on April 27 before concluding May 11 with a tribute to the musical legacy of Horace Silver.

The 2022 Newport Jazz Festival’s three days of sunshine were bracketed, more or less, by a pair of all-star ensemble jams that included Christian McBride. … END_OF_DOCUMENT_TOKEN_TO_BE_REPLACED

In its first full edition since the onset of the pandemic, and with a new director of programming, the Festival International de Jazz de Montréal … END_OF_DOCUMENT_TOKEN_TO_BE_REPLACED

Among the many physical, spiritual, and institutional losses related to the still-ongoing pandemic is that of Los Angeles’ renowned Playboy Jazz Festival (PJF) at the … END_OF_DOCUMENT_TOKEN_TO_BE_REPLACED

It’s difficult to imagine what the stage and the audience would have looked like at Gaillard Center in Charleston, South Carolina, if Rhiannon Giddens’ new … END_OF_DOCUMENT_TOKEN_TO_BE_REPLACED