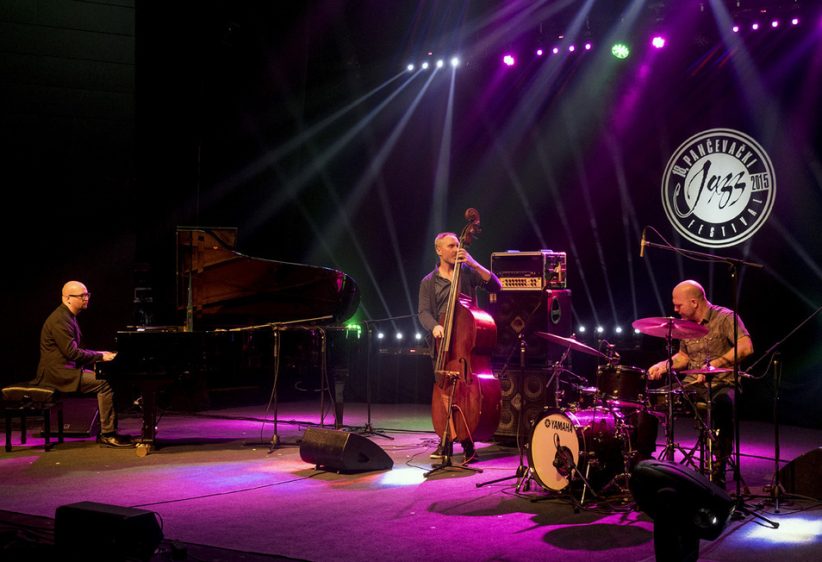 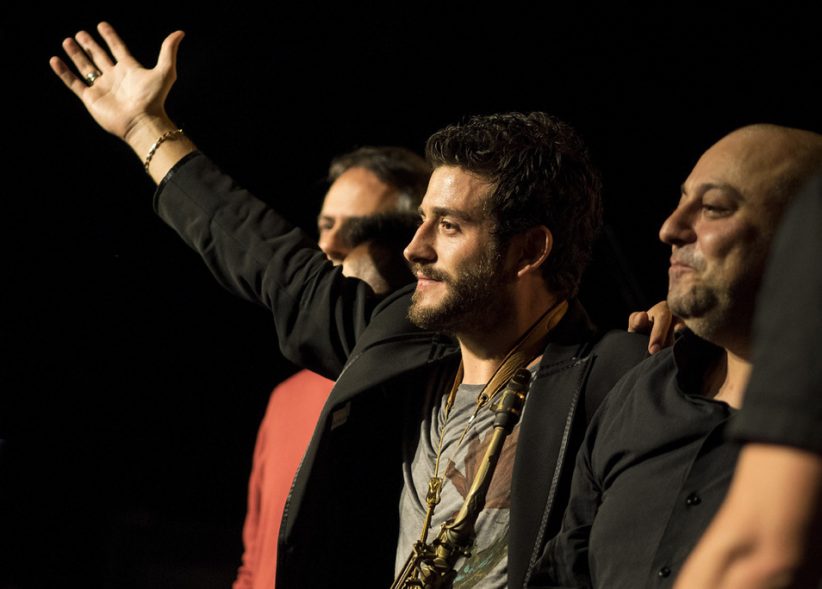 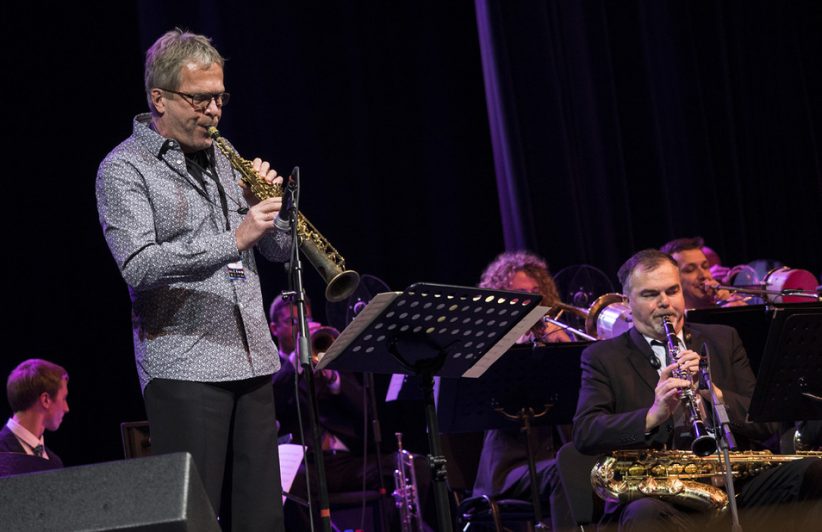 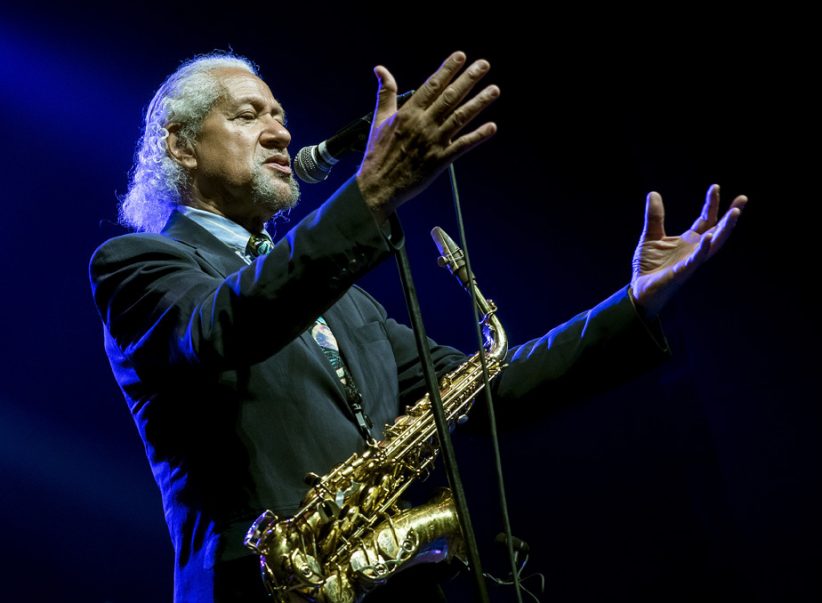 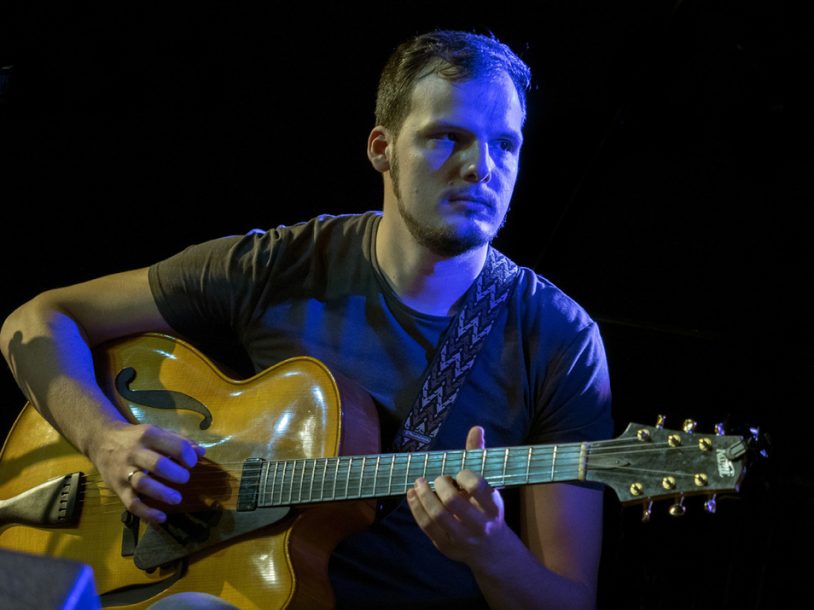 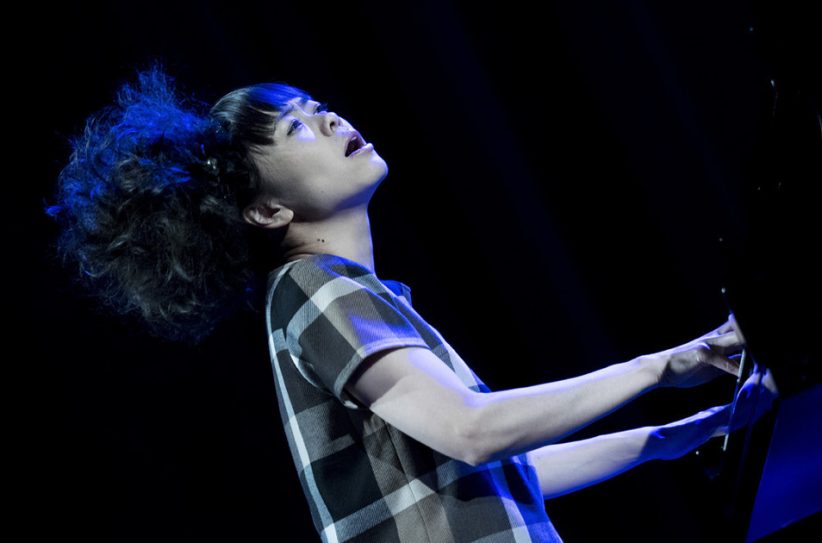 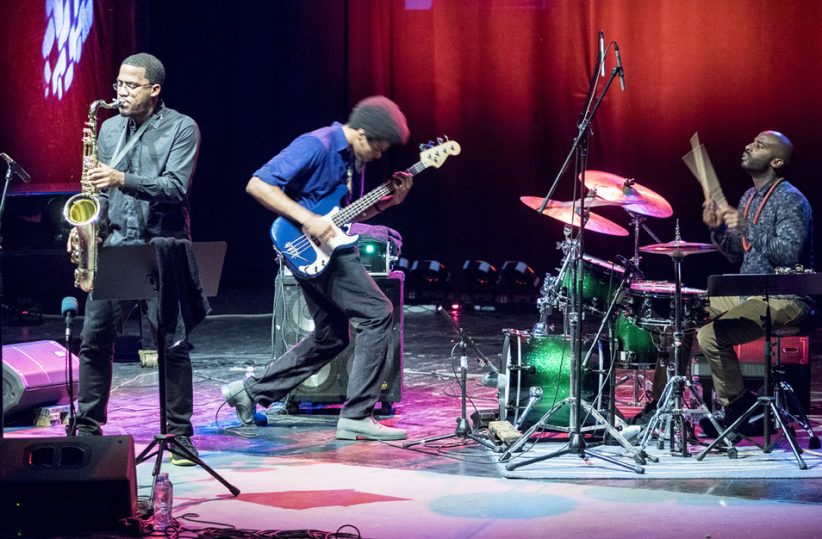 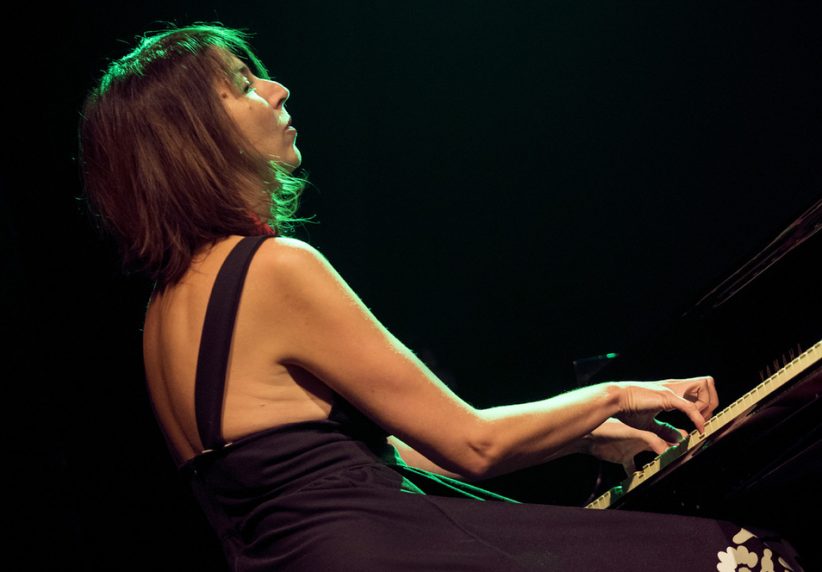 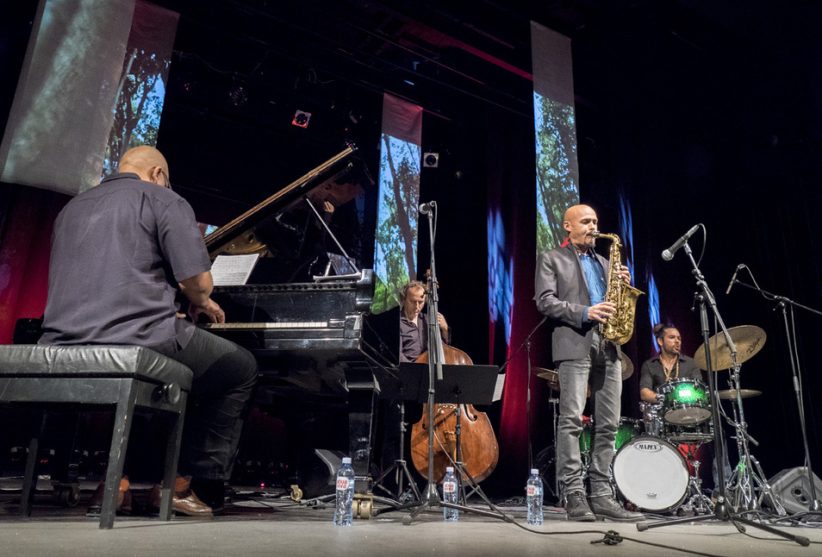 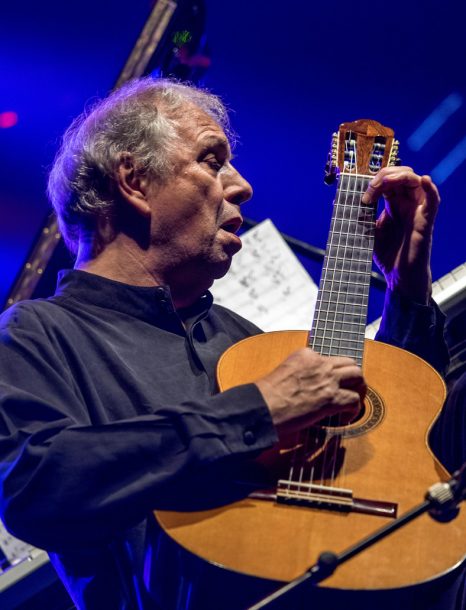 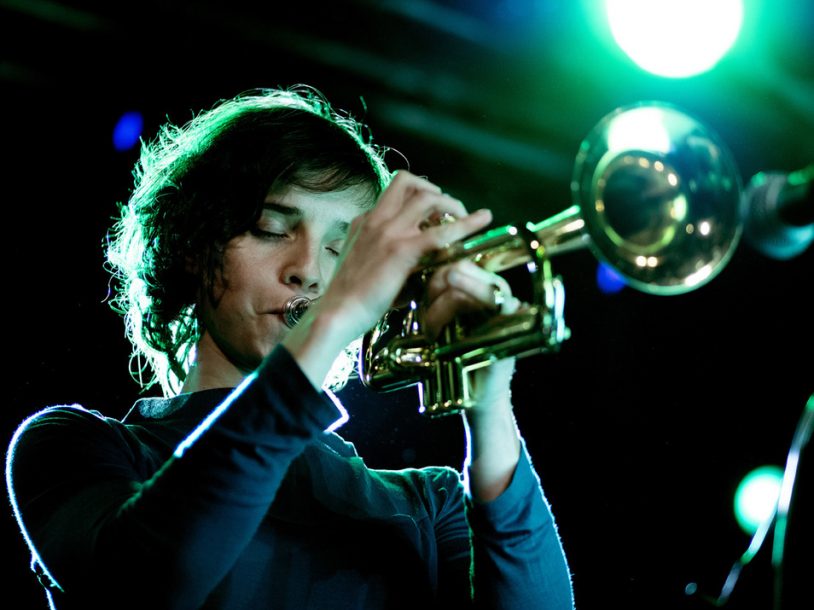 Svetlana Alexievich, winner of the 2015 Nobel Prize for literature, has said, “We live in an environment of banality. For most people, that’s enough. But how do you get through? How do you rip off that coating of banality? You have to make people descend into the depths of themselves.”

Perhaps jazz survives because it is the antithesis of banality. Late on Halloween night in 2015, at the Belgrade Jazz Festival, Rudresh Mahanthappa opened his set with a wild alto saxophone wail. He was in Sala Amerikana, a small concert space with walls painted black, where it is always midnight. It was a cry that split the night, and then immediately became a torrent of runs, with more runs beneath, as undercurrents. For a torrent it was remarkably precise, every stinging note defined. It sounded exotic, not entirely Western, yet the tune was “On the DL,” based on “Donna Lee,” from Mahanthappa’s Charlie Parker tribute album, Bird Calls. Whether you loved its merciless version of beauty or found its severity too strident, there was no doubt that banality was under direct attack. Mahanthappa created music from the depths of himself.

In the world jazz community there are still people who are surprised to learn that there is a Belgrade Jazz Festival. Yet it is now in its 31st year. It started in 1971, and in the ’70s and ’80s, when Yugoslavia was still intact, Belgrade was a major stop on the European autumn circuit. But, like so much else good in the Balkans, the festival went dark during the genocidal wars of the 1990s. It was started up again in 2005, and has gradually grown in scale. In 2015 it ran for five days, from October 28 to November 1.

If the Belgrade festival is a well kept secret, the Pančevo Jazz Festival is off the grid. Pančevo is a city of 123,000, 18 kilometers from Belgrade. No one has ever accused Pančevo of being beautiful. In Serbia it is best known for its petrochemical and fertilizer industries and for its pollution. Yet against all odds, the city has hosted a jazz festival for 18 years. In 2015 it ran November 5-8. Such stubborn devotion is a European phenomenon. The Pančevos of the United States do not have jazz festivals.

The renunciation of banality could be taken as the theme of both the Belgrade and Pančevo festivals. What the two share is the creative, uncompromised, leading-edge programming of Vojislav Pantić. He is on the board of the Belgrade festival, and, along with program manager Dragan Ambrozić, has played a central role in designing its lineup for many years. In Pančevo he is artistic director. The achievements of Pantić and Ambrozić are especially notable given their limited budgets.

A case could be made that, between them, Belgrade and Pančevo contained the four best alto saxophone players in jazz. Pančevo had Gary Bartz. In addition to Mahanthappa, Belgrade had Francesco Cafiso and Miguel Zenón. Cafiso emerged on the international scene over 10 years ago as an unprecedented saxophone prodigy. Few saxophonists have ever executed bebop with the proficiency that Cafiso possessed when he was 15. But as he entered his 20s, his virtuosity even more advanced and his conservatism undeterred, many critics worried where Cafiso’s career was going. As one, Enzo Capua of Italy, put it, “Francesco cannot play bebop for the rest of his life.”

The issue has been resolved. For long periods between 2012 and 2014, Cafiso, never known as a composer, cut back on his busy touring schedule, stayed home in Sicily, and worked on a portfolio of new pieces. A three-CD set called 3 has been released in Europe and will be released in the U.S. early in 2016. It contains 29 variously striking new Cafiso compositions. The first CD was recorded with the London Symphony Orchestra and the third with a jazz quartet. The middle CD, called La Banda, is Cafiso’s meditation on his homeland. Its colors and imagery are vivid, and its Sicilian musical forms are new to a jazz context. What Cafiso performed in Belgrade was material from La Banda. The international sextet included three little-known world-class players: pianist Mauro Schiavone of Sicily, trombonist Humberto Amésquita of Peru and trumpeter Giovanni Amato of Milan. The night in Sala Amerikana began with a blaring fanfare from Amésquita and Amato, which then became a song of celebration. The sound was distantly familiar, perhaps a marching band from a street in your dreams, or perhaps circus music from a Fellini film you saw long ago. It swept you up in its energy and exhilaration, and then Cafiso shot out of the ensemble, plunging and lurching all over his horn, while the rest of the band sustained its ecstatic parade steps. Cafiso has always been a supremely pretty player, with a pristine, singing alto tone. He has reinvented himself as an improviser. He now treats his horn more like a tenor, using it to blast and thrust. But because it is an alto, he can still exclaim and cry in treble. He traversed these extremes in huge intervallic jolts. The way Cafiso is playing now is only possible because of his early years mastering the traditional foundation. His solos now careen into shattering new forms of lyricism, in waves, in layers of scales, in jaggedness that is beautiful, not pretty.

Almost all concerts in Belgrade took place in Dom Omladine, the old communist youth center. Its primary performance space, Velika Sala, holds 600. Miguel Zenón’s set should have been exciting, but it was hampered by bad sound. Apparently the problem was caused by Zenón himself, who has some dubious ideas about playing without a monitor speaker, standing far back from his microphone, and trying for an acoustic blend with the room. The idea was a failure. The other members of his quartet (pianist Luis Perdomo, bassist Hans Glawischnig, drummer Henry Cole) were clear, but Zenón’s normally penetrating alto sound was faint and distant. (As a general rule, musicians should avoid interfering with the work of the sound engineer, especially in unfamiliar venues.)

One of the best ways to evaluate programming is whether the little-known and local acts that necessarily fill out every jazz festival lineup are interesting. At Belgrade in 2015, they were mostly outstanding. The first night featured three strong Serbian ensembles, all different. Hashima is an intriguing young band based on the unusual compositional forms of guitarist Igor Mišković. You won’t find many avant-garde jazz quartets more in control of dynamic contrast, or more comfortable with open space (including silence). Hashima is in the business of telling stories. Pieces might begin with Mišković and tenor saxophonist Srdan Mijalković hammering together over a stripped-down beat by drummer Aleksandar Hristić. Then everything might go whisper-soft, Mišković barely touching his strings (but Hristić still grooving). Hashima’s stories are never simple. Naked was next, an ass-kicking Balkan boogie band that, when violinist Dorde Mijušković soloed on a ballad, was capable of touching your heart. Mindedness, a quartet led by drummer Vladimir Kostadinović and featuring formidable Slovenian tenor saxophonist Jure Pukl, played present-day freebop with hard, clean edges. Mindedness could hold their own in New York.

Here are some other selective impressions from the Belgrade program. Not everything was high art. None of it was banal:

1) The only act too big for Dom Omladine was Hiromi. She played with her trio (Anthony Jackson, electric bass; Simon Phillips, drums) in Dom Sindikata, once a facility for communist trade union conferences, now a threadbare music venue. Hiromi filled all 1,600 seats. She is a novelty act, more acrobat than artist. Still, her chops are vast, and it was impossible not to grin when she threw her petite self upon her piano, intent on beating it to death.

2) Christof Lauer and Big Band RTS (for Radio-Television Serbia) opened for Hiromi. The project’s title was “Petite Fleur: Tribute to Sidney Bechet.” Reiner Temple did the arrangements and also conducted. Tempel’s charts for pieces like “Honeysuckle Rose” and “Petite Fleur” reimagined Bechet’s sensual romanticism in fresh, modernist, angular terms. Even “Si Tu Vois Ma Mère,” a wisp of melody as delicate as anything in the jazz canon, took on dark undertones when it was given to the orchestra’s trombones and saxophones. On “Petite Fleur” the orchestra was lush but Lauer’s soprano saxophone cut through it like a serrated knife. Then he blew a cadenza harder and edgier than Bechet’s aesthetic has previously allowed for.

3) A player who arrived in Belgrade with a buzz was James Brandon Lewis. His trio (Luke Stewart, electric bass; Warren “Trae” Crudup, drums) played Velika Sala, and from the first number, the concept was clear. Lewis wants to bring hip-hop into jazz on a more sophisticated, organic level of integration. His material was simple catchy song forms, but he always inundated the hip-hop with dense jazz content. In the midst of his tenor saxophone onslaughts, he revisited those simple songs again and again, a man on a mission. Stewart and Crudup turned everything nasty, Stewart with lethal hooks, Crudup with vicious backbeats. (Crudup is a hysterical, exhausting drummer.) Lewis’ obsessive repetition was sometimes too much for a jazz audience, which, unlike the hip-hop crowd, values musical development, and finds excessive repetition more tedious than suspenseful. But on the basis of speed and power alone, Lewis is a talent to watch. He may eventually be able to use elements like hip-hop to expand the jazz language rather than limit it.

4) Two bands led by avant-garde Portuguese trumpeter Susanna Santos Silva were a hot conversation topic in the teeming foyer of Sala Amerikana. She is into otherworldly harmonies and fragmentary melodies. Mostly she is into ensemble textures that evolve in ways impossible to predict. When her band suddenly veered out of abstraction, settled into time and allowed for unapologetic lyricism (from herself and/or alto saxophonist João Pedro Brandão), it was like breaking sunlight.

I had hoped to report on the 2021 edition of the DC Jazz Festival without using the word “pivot,” a term that was already overused … END_OF_DOCUMENT_TOKEN_TO_BE_REPLACED

On March 10, 2020, I stood shoulder to shoulder in a crowded Philadelphia bar to hear a blistering set by guitarist Jeff Parker’s band. I … END_OF_DOCUMENT_TOKEN_TO_BE_REPLACED

The weather gods must have been in favor of Newport Jazz’s 2021 return. A superb first day of the festival was followed by an even … END_OF_DOCUMENT_TOKEN_TO_BE_REPLACED