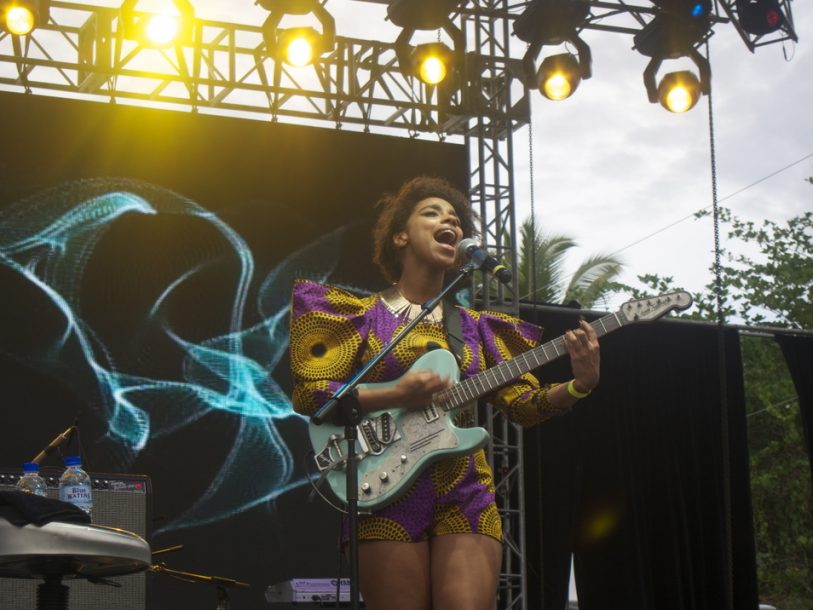 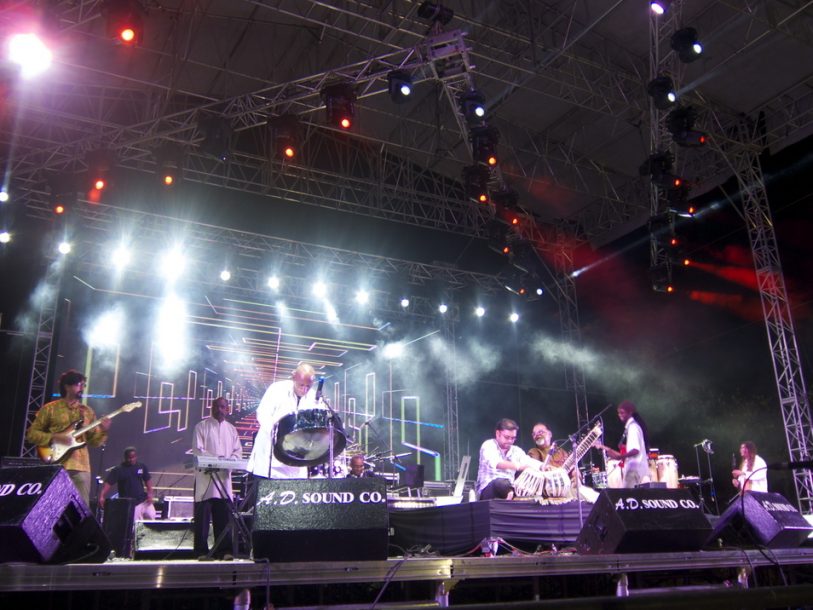 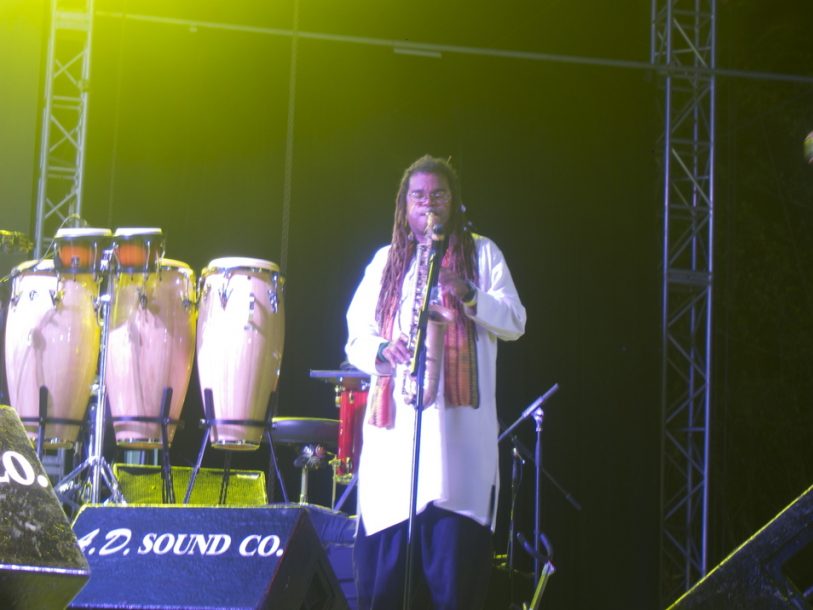 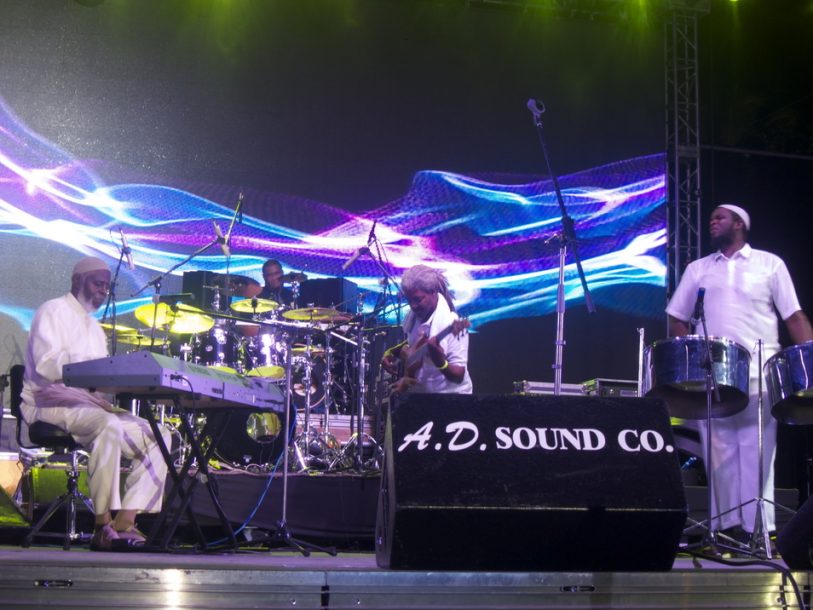 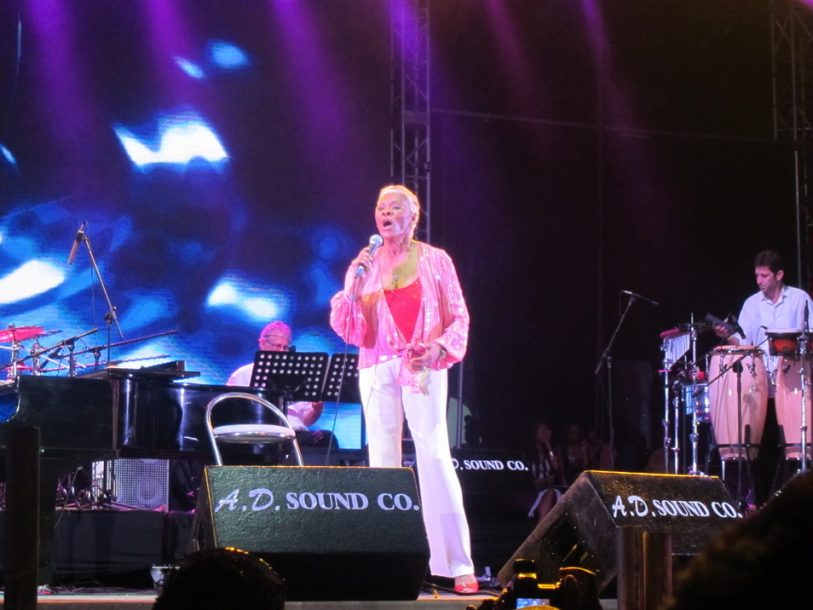 Not even rain could deter the dedicated audience at the fifth annual Tobago Jazz Experience from camping out in lawn chairs, some without umbrellas, and dancing between the raindrops to the sounds of jazz, world music and steel pan. Far from fair-weather jazz fans, Tobagonians like their jazz how they like their beaches: rum-soaked, boozy, and laid-back.

When the sky finally cleared and the rain subsided toward the end of the eight-day festival, held April 20 through April 28, Canadian R&B artist Melanie Fiona braved the torrential downpour, performing a rousing set from her 2012 album The MF Life. She was joined by reggae icon Freddie McGregor and Trinidadian soca power couple Bunji Garlin and Fay-Ann Lyons. On the final night, Dionne Warwick, Lianne La Havas and an eclectic array of local acts reigned over Pigeon Point Heritage Park. Other highlights included the Trinidad and Tobago-based straight-ahead jazz trio Carlton Alexander and the Coal Pot Band and Mungal Patasar and Pantar, which blended Indian and West Indian traditions with sitar, tabla, and steel pan.

After Carnivale, the Tobago Jazz Experience is the second best-attended event in Trinidad and Tobago, a testament to the widespread respect the culture holds for music of all stripes. Accessible only by a puddle-jumping commuter flight out of Trinidad operated by the regional Caribbean Airlines, or a two-hour ferry, the Tobago Jazz Experience is where jet-setting jazz fans might go when away from it all isn’t quite far enough.

Having shed its imperial past as a sugar cane outpost for the British, a strong nationalist spirit pervades the culture: their rum, Angostura (best known as purveyors of bitters) and their music, steel pan, seem to flow from the sweeping vistas. The steel pan, a chromatically pitched 55-gallon drum played with rubberized sticks, was invented in Trinidad and Tobago during the 1940s, quickly becoming a versatile instrument used in reggae, fusion and jazz bands.

During their set, Mungal Patasar and Pantar featured the steel pan prominently, with Marlon Charles demonstrating virtuosity on the instrument through a series of dazzling solos. Charles was complemented by multireedist Dawud Orr, Patasar’s sitar and his son Prashant Patasar’s masterful tabla.

Pianist and arranger Carlton Alexander restricts most of his performances to his native Trinidad and Tobago, though his playing transcends national borders. Alexander honed his bebop chops while studying with Barry Harris during a stint in Toronto, leading to a style that incorporates Monk-like phrasing and island rhythms.

English singer-songwriter Lianne La Havas was a crowd favorite, bringing her brand of blues-inflected folk and insouciant swagger on her first trip to the Caribbean. The 23-year-old performed a cappella selections with her acoustic guitar, culled from her summer 2012 debut studio album, Is Your Love Big Enough? Highlights included “Forget” and “No Room for Doubt,” a plangent response to broken heart syndrome, and “Age,” a cozy girl power anthem to a romance with an older man that channeled Blossom Dearie.

Dionne Warwick, the festival’s headliner, performed a long set of her hits from throughout her 50-year career. At 72, the pop icon’s voice might be wispier than it once was, but Warwick embraces her age with a sense of poise and regal charm. Among other songs, she performed the Burt Bacharach and Hal David classic “Walk on By,” in addition to “I Say a Little Prayer” and “That’s What Friends Are For.”

The festival concluded with neo-soul singer-songwriter India.Arie, on her second public appearance in 2013, following a four-year recording hiatus. Her forthcoming album SongVersation (Soulbird/Motown) is expected to be released this month. Arie drew mostly from the album, reaching a high note on “Cocoa Butter,” which had the crowd swaying in spiritual communion. Arie clearly responded to the warm welcome to her return, made warmer by the spring heat and the throngs of people in close quarters. “I love life,” she said.

Among the many physical, spiritual, and institutional losses related to the still-ongoing pandemic is that of Los Angeles’ renowned Playboy Jazz Festival (PJF) at the … END_OF_DOCUMENT_TOKEN_TO_BE_REPLACED

It’s difficult to imagine what the stage and the audience would have looked like at Gaillard Center in Charleston, South Carolina, if Rhiannon Giddens’ new … END_OF_DOCUMENT_TOKEN_TO_BE_REPLACED

“It’s time to imagine a place where we can come together,” Danilo Pérez said from the hallowed stage of Washington, D.C.’s historic Sixth & I … END_OF_DOCUMENT_TOKEN_TO_BE_REPLACED

At the Zeiders American Dream Theater in Virginia Beach, Va., between April 8 and 10, the Vocal Jazz Summit convened in person for the first … END_OF_DOCUMENT_TOKEN_TO_BE_REPLACED