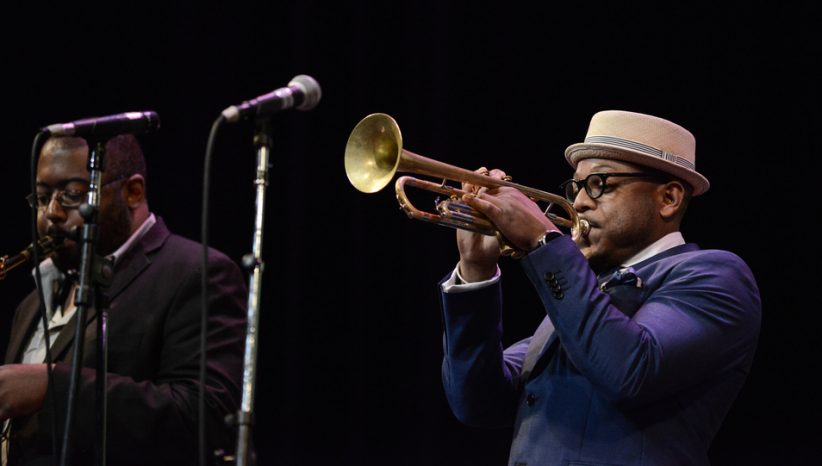 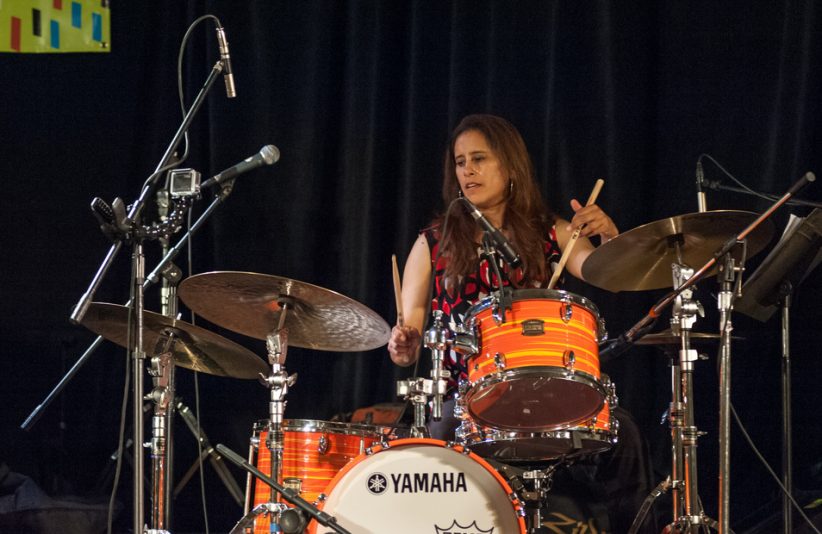 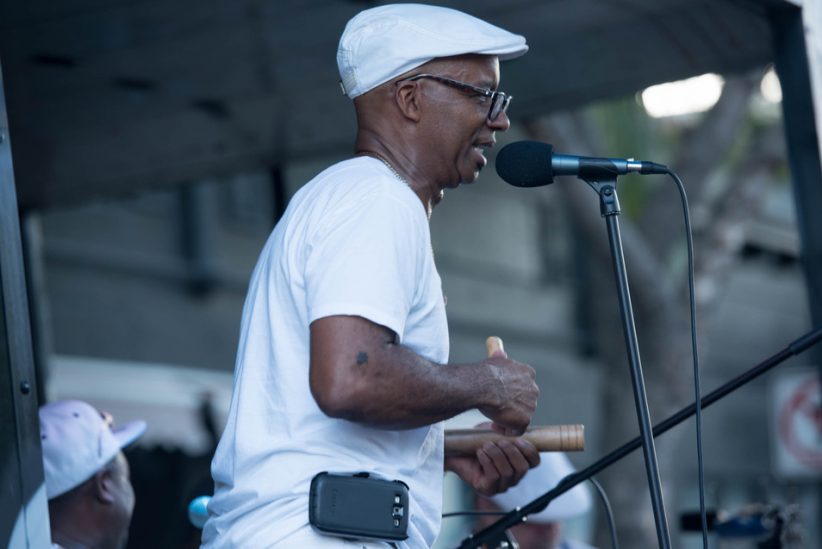 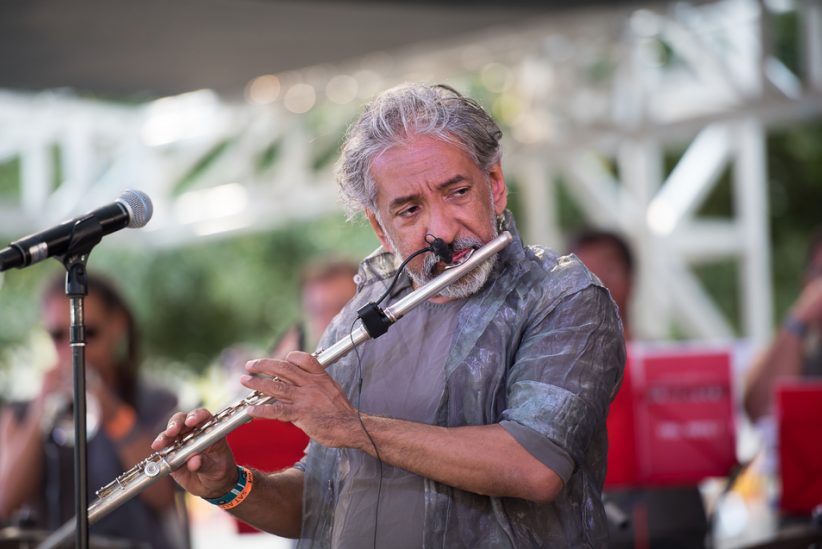 Bright moments. San Jose Jazz’s annual Summer Fest positively brimmed with them, from the celebratory opening set by the rising San Francisco funk/disco combo Con Brio through the wee-hours Saturday night/Sunday morning Rahsaanathon at Café Stritch, which by savvy booking and attrition has emerged in the past year as the Bay Area’s hippest jazz club. With 13 venues arrayed around San Jose’s downtown Plaza de Cesar Chavez, Summer Fest is now the Bay Area’s other world-class summer jazz festival, offering an urban alternative to the sylvan setting of the Monterey County Fairgrounds (the Stanford Jazz Festival is also first-rate, but it’s a concert series rather than a concentrated musical maelstrom a la the Monterey Jazz Festival).

Running Aug. 7-9, the 26th Annual Summer Fest featured a wealth of salsa, Latin jazz, Puerto Rican plena and various Brazilian styles, building on San Jose Jazz’s embrace of Afro-Caribbean musical currents as jazz’s kin. So it was more a delight than a surprise to find Cuban conga master Jesus Diaz leading a captivating rumba session on the back of a box truck customized to serve as a bandstand on Friday evening featuring Michael Spiro and vocalist Fito Reynoso. Nearby, the muscular Detroit funk outfit Will Sessions gave a master class in instrumental R&B while an impressive break dance crew took turns showing off their increasingly agile moves in sync to the grooves. But Friday’s high point wasn’t actually a San Jose Jazz event.

While Café Stritch served as an essential Summer Fest venue during the day on Saturday and Sunday, in the evenings the club presented its own mini-festival. The third annual Rahsaanathon once again celebrated the music and legacy of Rahsaan Roland Kirk (1935-1977), with an expanded program that opened Aug. 4-5 with baritone saxophonist Claire Daly, mandolinist/guitarist John Kruth and pianist Sonelius Smith (who recorded with Kirk on several classic Atlantic albums, including 1972’s Blacknuss). Steve Turre and the Eulipion All-Stars opened a three-night Stritch stand on Aug. 6, and I made it by for the latter two nights. The East Bay-raised Turre first encountered Kirk in San Francisco, and struck up an intermittent but long-standing relationship with the singular saxophonist. Turre reassembled the same roof-raising sextet as last year, featuring Oakland-raised New York drummer Darrell Green, bassist Marcus Shelby, pianist Matt Clark, alto and soprano saxophonist Charles McNeal and multi-instrumentalist James Carter. On Friday, the eve of Kirk’s 80th birthday, the energy in the club crackled with love and reverence for Rahsaan.

Turre draws many of the Eulipion arrangements from his stellar 2004 album The Spirits Up Above (HighNote), which also features James Carter, and the equally memorable 1986 Vibration Society album The Music of Rahsaan Roland Kirk, but in concert the All-Stars deliver the music as an impassioned sermon, full of fire, brimstone and heavenly invocations.

It’s something of a mystery why Kirk’s themes aren’t part of the standard repertoire, from the sublime ballad “Steppin’ Into Beauty,” rendered in ravishing detail by Turre, to the sassy blues of “Dorthaan’s Walk” to the ecstatically grooving “Spirits Up Above.” As on the previous Rahsaanathons, the ageless poet Betty Neals was on hand to recite her verse she recorded with Kirk on his classic 1976 album The Return of the 5000 Lb. Man, providing the evening with a true benediction. And powerhouse Oakland blues and jazz singer Terrie Odabi infused the Eulipion theme with a regal and earthy air. Around midnight Café Stritch’s Steve Borkenhagen presented Carter with Kirk’s reconditioned stritch, a straight alto with a keening tone, adding another layer to the Kirkian communion.

San Jose-raised drummer Sylvia Cuenca opened Saturday’s proceedings with a rousing early afternoon set of postbop with bassist Essiet Essiet, pianist Peter Zak and tenor saxophonist Teodross Avery, who is well-prepared for another burst of attention should it come his way some two decades after his early releases for Impulse! Opening with Cedar Walton’s “Firm Roots,” the quartet played with the loose and authoritative swagger that only a lockstep bass and drum team can provide.

One of the festival’s high points was the premiere of Trinidadian trumpeter Etienne Charles’ Chamber Music America-commissioned San Jose Suite in the lovely Art Deco California Theatre. Inspired by acts of resistance and cultural preservation in the face of long odds, Charles created a work that draws on music and rituals from San Jose, Costa Rica, St. Joseph, Trinidad and San Jose, Calif. From the tension and release of “Revolt,” which was inspired by a West Indian slave uprising, to “Vigil, which draws on music and rituals from Costa Rica’s indigenous Boruca people, Charles’ evocative music alternated between reflective melodic lines and roiling rhythmic patterns.

Summer Fest’s climax took place on the main stage at the north end of the sun-dappled Plaza de Cesar Chavez, where the 20-piece Brazilian band from Salvador da Bahia, Letieres Leite and Orkestra Rumpilezz, introduced their sensational blend of samba and orchestral jazz. Leite’s arrangements often feature flute and soprano saxophones over the rumbling low-end lines of the tuba, bari and bass trombone, a tremendously dramatic device (particularly when combined with a samba battery). He embraces all of Bahia’s African heritage, from the Yoruban-derived Candomblé to little known North African currents, which he evoked in a keening piece, “Os Arabes.” At one point, Leite had the band demonstrate several of the 200 forms of samba he says can be found in Bahia. Let’s hope Orkestra Rumpilezz returns soon to cover all the rest.

The 2022 Newport Jazz Festival’s three days of sunshine were bracketed, more or less, by a pair of all-star ensemble jams that included Christian McBride. … END_OF_DOCUMENT_TOKEN_TO_BE_REPLACED

In its first full edition since the onset of the pandemic, and with a new director of programming, the Festival International de Jazz de Montréal … END_OF_DOCUMENT_TOKEN_TO_BE_REPLACED

Among the many physical, spiritual, and institutional losses related to the still-ongoing pandemic is that of Los Angeles’ renowned Playboy Jazz Festival (PJF) at the … END_OF_DOCUMENT_TOKEN_TO_BE_REPLACED

It’s difficult to imagine what the stage and the audience would have looked like at Gaillard Center in Charleston, South Carolina, if Rhiannon Giddens’ new … END_OF_DOCUMENT_TOKEN_TO_BE_REPLACED