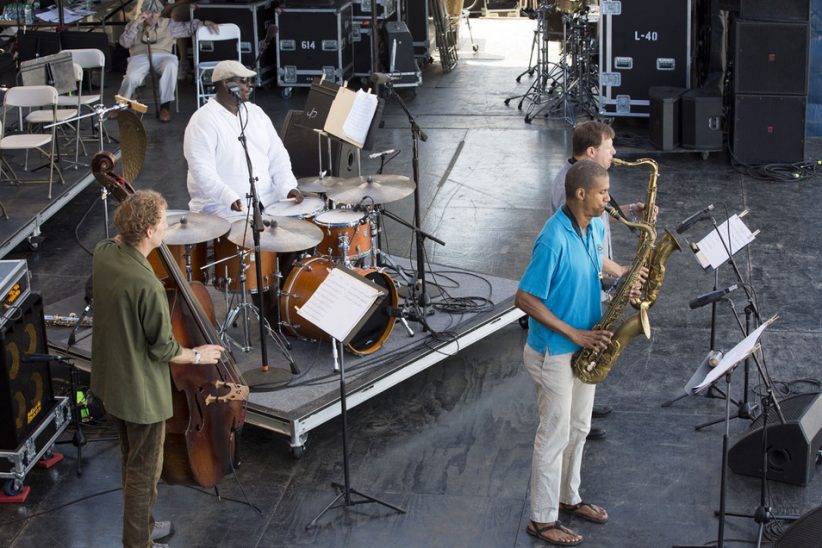 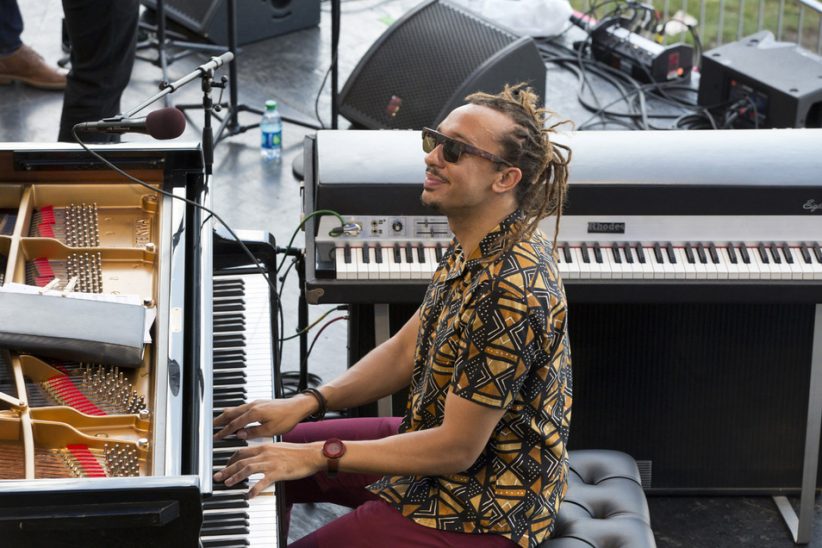 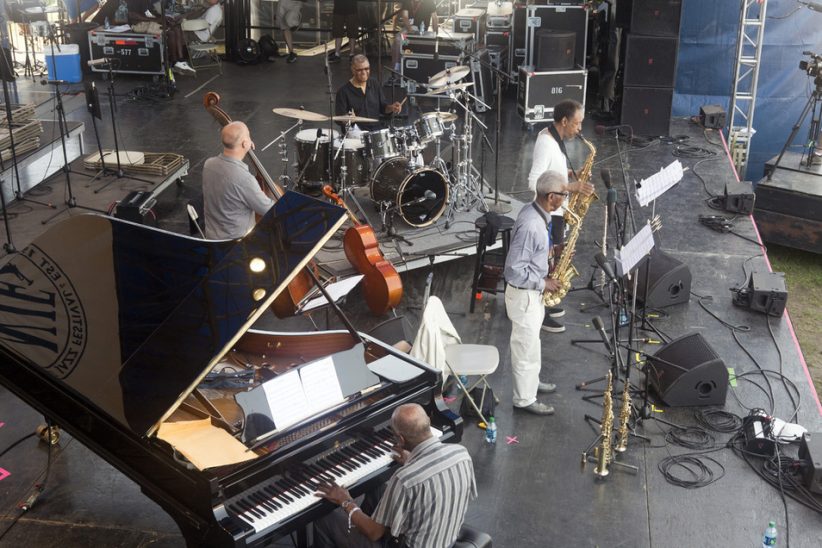 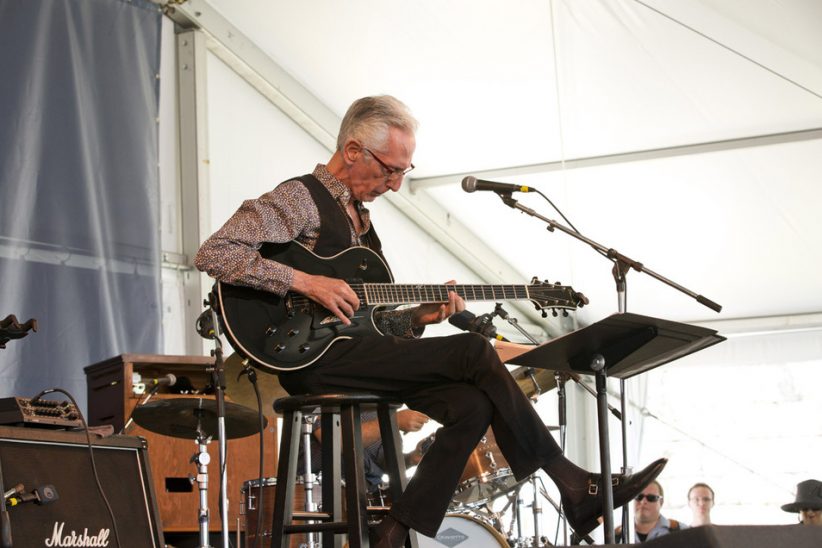 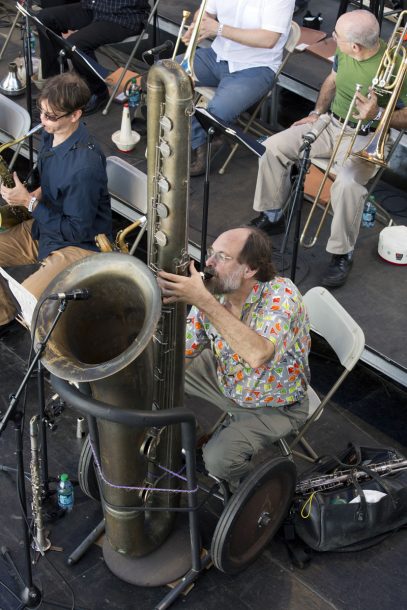 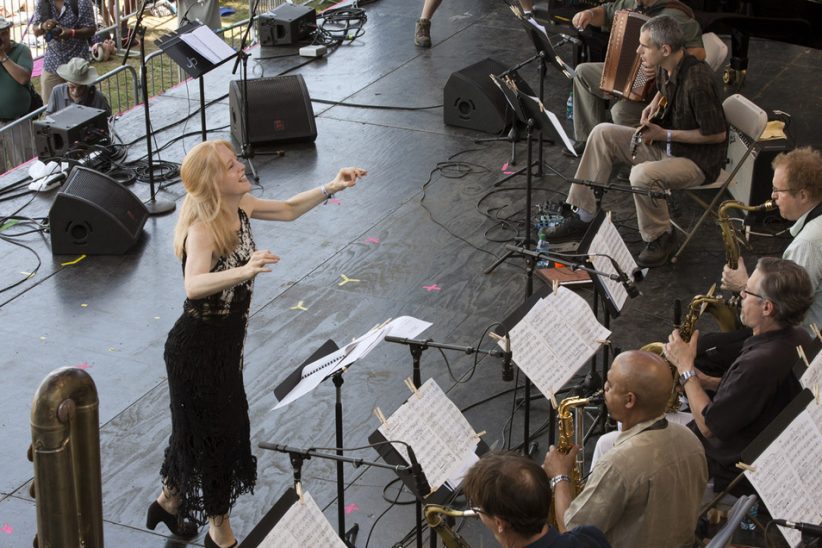 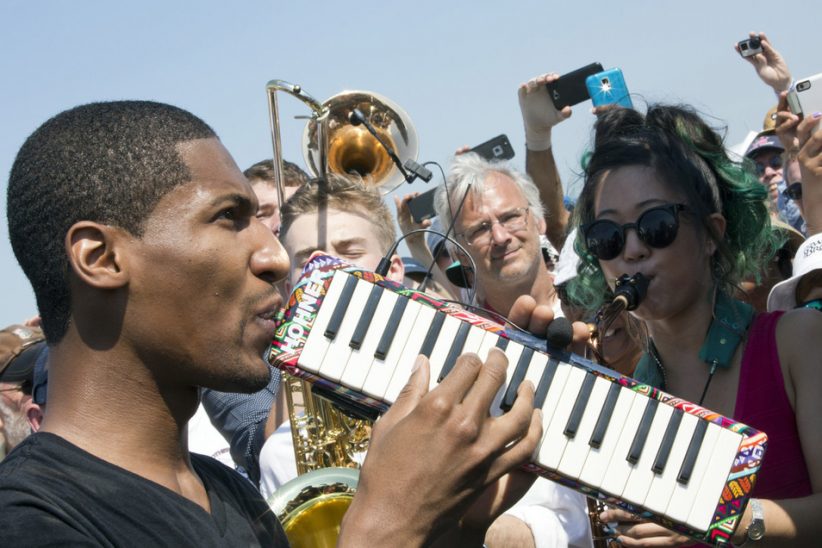 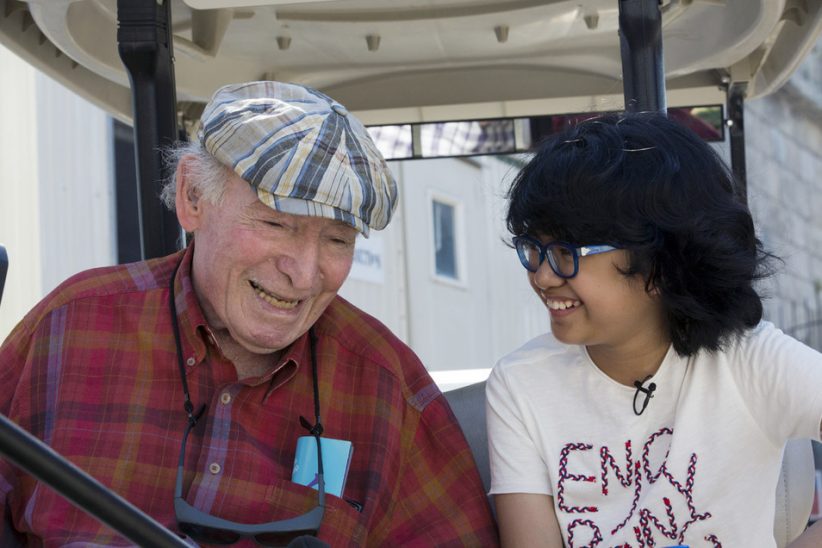 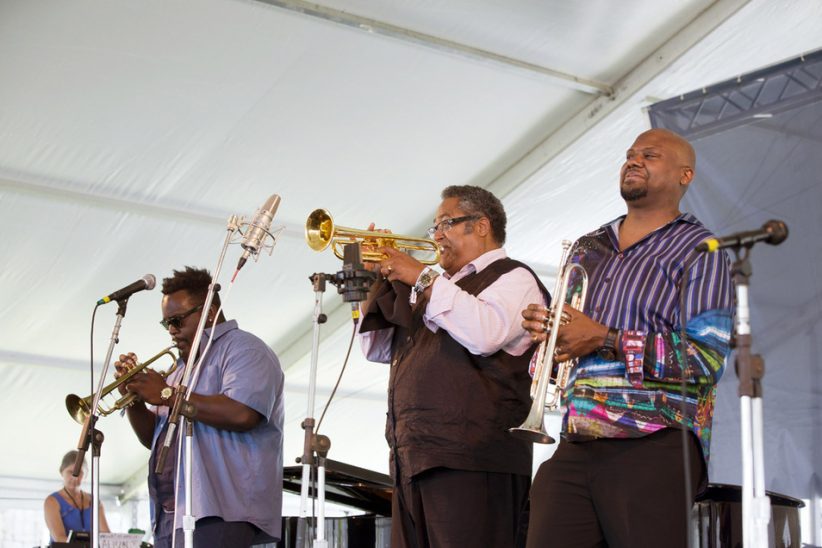 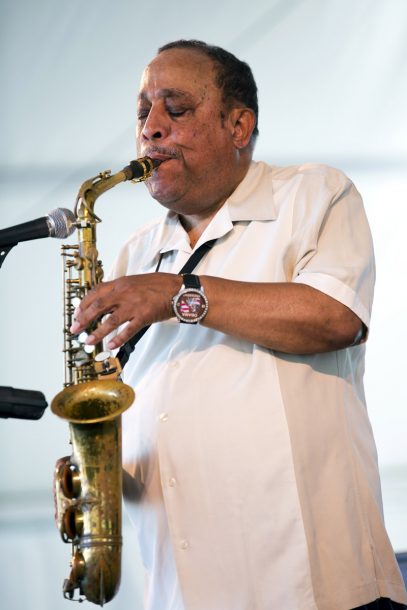 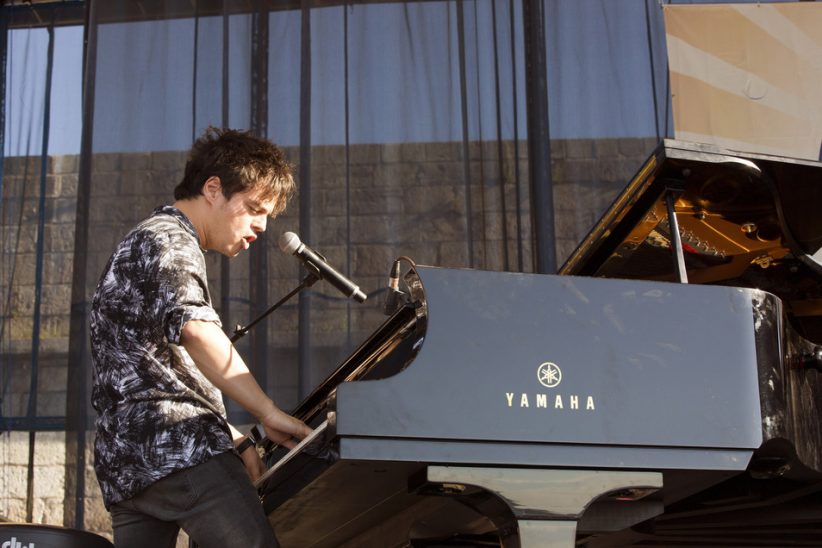 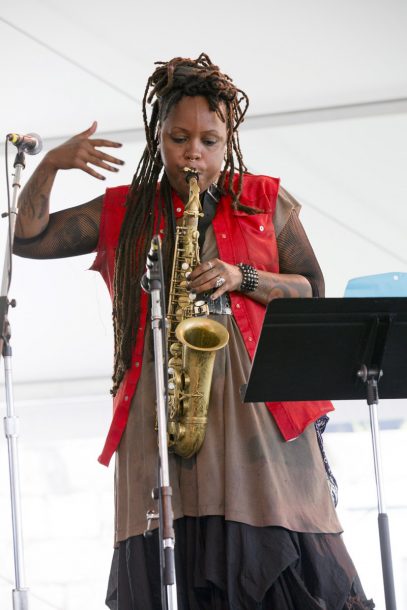 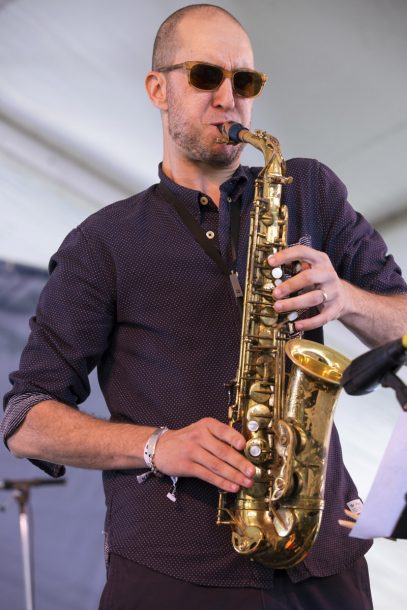 For the second year a full Friday of music took place at the Fort, and again it was a day geared primarily toward artists new to the festival. It started with big bands from the University of Rhode Island and the Berklee College of Music on the Harbor and main Fort stages, respectively. Kicking things off on the mid-sized Quad stage was Ambrose Akinmusire’s quartet, performing pieces from the trumpeter’s pair of critically acclaimed Blue Note albums. Those with a long morning journey to Fort Adams also risked missing the unusually strong and overlapping second sets on the three stages. On the Harbor stage was personal-history-minded alto saxophonist and composer Matana Roberts, whose set-long “Mississippi Moonchile” was highlighted by Jason Palmer’s trumpet work and Roberts reading Bible passages her great great grandfather had copied to teach himself to read at age 40. On the Quad stage, Steve Lehman led his octet on “Rudreshm” and selections from his Mise en Abîme album, winner of the 2014 NPR Music Jazz Critics Poll. Throughout the band’s performance, Chris Dingman’s vibraphone added an otherworldly underpinning to the precision horn lines of Lehman’s alto sax and Jonathan Finlayson’s trumpet, and to Tyshawn Sorey’s ferocious drumming. Out front on the Fort stage, drummer Johnathan Blake led an all-star quartet of tenor saxophone titans Mark Turner and Chris Potter and bassist Ben Street through modernist classics.

Pianist Gerald Clayton followed Blake on the Fort stage with an impressive set of his own compositions and a backing quartet that gave festivalgoers a second crack at seeing Akinmusire play trumpet; they also had two chances to catch Clayton’s tenor saxophonist, Ben Wendel, who joined his progressive collaborative group Kneebody for a Quad stage set a bit later that afternoon. The John Hollenbeck Large Ensemble’s much-anticipated set of tunes from the albums Songs We Like a Lot and its predecessor, Songs I Like a Lot, was delayed and truncated by a late arrival blamed on an incompetent bus driver. Still, the band had enough time to offer sophisticated takes on such material as the Carpenters’ hit “Close to You” (Kate McGarry singing lead, Theo Bleckmann adding vocal filigree) and a “Wichita Lineman” whose straightforward beginning was taken to a very different but compelling place via Ben Monder’s featured guitar distortion. The hard-grooving, youthful band Snarky Puppy wrapped up day one on the Fort stage with a spirited set, while the Harbor stage saw the tradition-leaning combos of young trumpeter Bria Skonberg and veteran drummer Herlin Riley followed by the computer-driven, space-age experimentalism of trumpeter Peter Evans. (The abrupt shift from past to future inspired early exits in the audience throughout Evans’ aggressive set.) The Quad stage, meanwhile, featured a blues set from Lucky Peterson and ended the day with Christian McBride’s trio featuring pianist Christian Sands and drummer Ulysses Owens Jr., the three of them decked out in suits and ties despite the temperature.

The next afternoon at the Fort stage, pianist and vocalist Jon Batiste, recently tapped as music director for Late Show With Stephen Colbert, paraded with his Stay Human horns through the audience, coaxing listeners to sing along with him on “On the Sunny Side of the Street,” his slow, steady progress through the crowd identifiable by the forest of smartphones rising up to surround him. Batiste and his audience weren’t the only ones singing on Saturday. Cécile McLorin Salvant dazzled from the Quad stage with her theatrically enhanced vocal prowess for the second year in a row, this time without an accompanying downpour, backed as usual by the superb Aaron Diehl Trio. She was followed by the equally phenomenal José James, who seduced listeners with his confident baritone and a setlist that included John Coltrane’s “Equinox,” a tightly stitched coupling of the Bill Withers tunes “Ain’t No Sunshine” and “Grandma’s Hands,” a take on Emily King’s “Come to My Door” with James accompanying himself on acoustic guitar, and selections from his outstanding Billie Holiday tribute, Yesterday I Had the Blues. The all-star trio backing James on that album (Jason Moran, piano; John Patitucci, bass; Eric Harland, drums) wasn’t on hand at Newport, but the praiseworthy young cats behind him at the festival included the 20-year-old pianist and organist James Francis, who has also been gigging with the likes of Jeff “Tain” Watts and Stefon Harris around New York while still a couple of years shy of graduating from the New School. Other Saturday vocalists included Cassandra Wilson showcasing work from her Billie Holiday centennial tribute album, Coming Forth by Day, on the Fort stage, and Lisa Fischer, one of the main backup singers featured in the Oscar-winning documentary 20 Feet From Stardom, performing a crowd-pleasing Quad stage set that ended with covers of “Jumpin’ Jack Flash” and “Wild Horses,” two hits by her employers the Rolling Stones.

The instrumental standouts from Saturday included Jack DeJohnette’s group Made in Chicago, with drummer DeJohnette joined by AACM legends Muhal Richard Abrams on piano and Roscoe Mitchell and Henry Threadgill on saxes and flute, and ubiquitous Windy City bassist Larry Gray; the great Maria Schneider Orchestra celebrating its terrific new release The Thompson Fields, with competitive preening by saxophonists Donny McCaslin and Scott Robinson in the role of birds-of-paradise on Schneider’s New Guinea-inspired “Arbiters of Evolution”; and a sublime Tom Harrell Quintet set on the Harbor stage. Friday headliner Johnathan Blake kept busy as the drummer for the latter two bands, and guitarist Ben Monder got another turn in the spotlight with Schneider. The DeJohnette group opened the day’s Fort stage offerings-bad news for anyone foolish enough to allow less than an hour for what is usually an under-30-minute drive in from nearby Middletown. But catching even part of this rare reunion of 84-year-old Abrams and his three septuagenarian colleagues (DeJohnette, 72; Mitchell, 75; Threadgill, 71) was a special treat.

On the opposite end of the age scale, piano phenomenon Joey Alexander, a 12-year-old kid with long, man-sized fingers, was spotted being trailed through the media tent by a camera crew (rumored to be there for 60 Minutes) documenting his pair of short performances at the Quad and new indoor Storyville stage. (That fourth stage debuted Saturday and Sunday in what once housed the park’s yachting museum. It featured a variety of piano performances and discussions of various aspects of Miles Davis’ career, one of the latter featuring festival founder George Wein and his memoir collaborator Nate Chinen.) Other noteworthy Saturday performances included trombonist Conrad Herwig’s Latinization of classics by Horace Silver, featuring Michel Camilo on piano; the Pat Martino Organ Trio’s hard-swinging mix of the leader’s own tunes and covers of standards by Wes Montgomery (“Full House”) and Sonny Rollins (“Oleo”); and the Coltrane-inspired spirituality of the Kenny Garrett Quintet. Irvin Mayfield and the New Orleans Jazz Orchestra was the day’s feel-good Fort closer.

The Fort Stage got adventurous again Sunday morning, with Arturo O’Farrill and the Afro Latin Jazz Orchestra debuting work from their soon-to-be-released album, Cuba: The Conversation Continues. O’Farrill explained that the orchestra had been in Cuba recording the album when President Obama announced that the U.S. would reopen diplomatic relations with the island nation. Their festival set opened with “Vaca Frita,” featuring turntablist DJ Logic and solos by David DeJesus on soprano sax, O’Farrill’s son Adam on trumpet and the leader on piano. The Dafnis Prieto composition “The Triumphant Journey” followed, and then featured guest Rudresh Mahanthappa joined the orchestra for The Afro Latin Jazz Suite, the album’s four-part centerpiece. O’Farrill introduced his guest with a story about having to pull his car over upon first hearing Mahanthappa’s alto sax while driving through Michigan; he even claimed he began composing the suite for Mahanthappa at that moment. Alexis Bosch’s “Guajira Simple,” one of the two-disc album’s handful of compositions by Cuban composers, followed, and O’Farrill brought out Christopher “Chilo” Cajigas to perform “They Came,” his spoken-word tribute to Puerto Rican contributions to America from the orchestra’s celebrated 2014 album The Offense of the Drum. (O’Farrill called for the piece’s composer-arranger, Jason Lindner, to emerge from the stage wing and take a bow.)

O’Farrill was followed on the Fort stage later that afternoon by another Arturo, trumpeter Arturo Sandoval, whose set of Cuban-accented bebop concluded with a standard co-written and made famous by his hero Dizzy Gillespie, “A Night in Tunisia.” Between the Arturos came Michel Camilo and Hiromi performing a duo piano set, and Dr. John and his Nite Trippers got people dancing with their gris-gris thing, making up for his illness-related cancellation last year.

The music at the smaller stages Sunday was also first-rate. Scott Robinson lugged his arsenal of instruments including a huge contrabass sax to the Harbor stage for his quirky “Doctette” tribute to the WWII-era pulp novel hero Doc Savage. Then came crack trios led by Bill Frisell and Fred Hersch doing their inimitable things on guitar and piano, respectively, followed in turn by 88-year-old Lou Donaldson cracking wise between tunes, singing his comic blues “Whiskey Drinking Woman” and letting guitarist Eric Johnson handle the heavy lifting on the inevitable “Alligator Bogaloo.”

The Quad stage featured Billy Childs’ Jazz Chamber Ensemble, “Jon Faddis: Triumph of Trumpets” (with Sean Jones and 2014 Thelonious Monk trumpet competition winner Marquis Hill joining Faddis in the frontline), the James Carter Sextet celebrating the music of Don Byas, and a quartet co-led by Miles Davis alumni Mike Stern and Bill Evans. But an especially memorable moment occurred there when 20-year-old Adam O’Farrill, a Monk trumpet competition runner-up who’d performed with his father’s orchestra that morning, sat in with keyboardist Jason Lindner’s forward-looking Now vs. Now trio. When O’Farrill blew a climactic solo on the new piece “Dichotomy” that earned the group a standing ovation, a delighted Lindner grabbed a microphone, reintroduced the young trumpeter and informed the audience, “It’s the first time he played it. We’ve never played it. But that’s jazz, right?”

Jamie Cullum closed out the Fort stage for the weekend with tunes from his big-band album Interlude, his core backing group augmented by a horn section on loan from the opening day’s University of Rhode Island band. Cullum is a born entertainer, a sort of latter-day Dudley Moore (i.e., a short, charismatic Brit with genuine music chops), and he revved up the crowd with his usual attention-grabbing antics: playing a trap drum as he sang his opener, and scrambling atop the grand piano after switching to it for his second number. A little of that can go a long way, giving the jazz cognoscenti an excuse to duck out early and avoid the departing rush, Cullum’s version of “Don’t Let Me Be Misunderstood” providing a pleasant accompaniment to their exit.

“It’s time to imagine a place where we can come together,” Danilo Pérez said from the hallowed stage of Washington, D.C.’s historic Sixth & I … END_OF_DOCUMENT_TOKEN_TO_BE_REPLACED

At the Zeiders American Dream Theater in Virginia Beach, Va., between April 8 and 10, the Vocal Jazz Summit convened in person for the first … END_OF_DOCUMENT_TOKEN_TO_BE_REPLACED

The Big Ears Festival returned to Knoxville in a big way in late March, drawing an estimated 30,000 music enthusiasts from across the U.S. and … END_OF_DOCUMENT_TOKEN_TO_BE_REPLACED

Let’s get this out of the way: The Savannah Music Festival is not a jazz festival. Held over the course of 17 days in late … END_OF_DOCUMENT_TOKEN_TO_BE_REPLACED