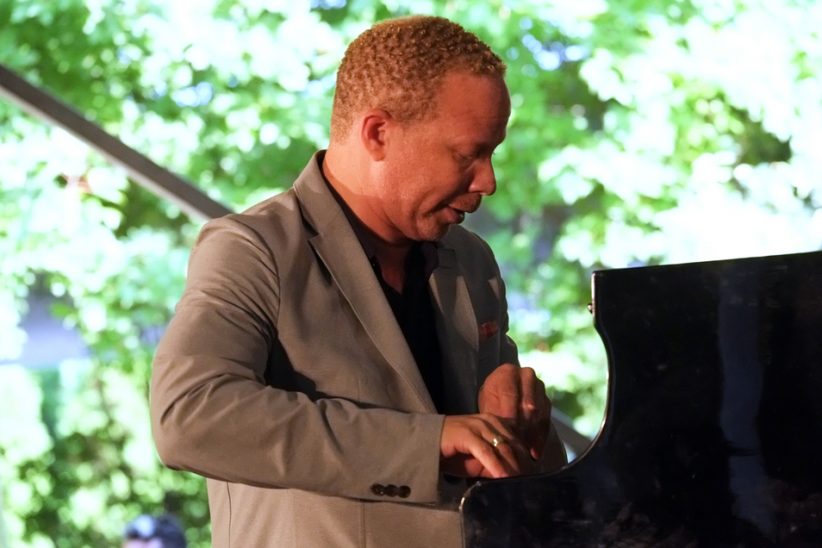 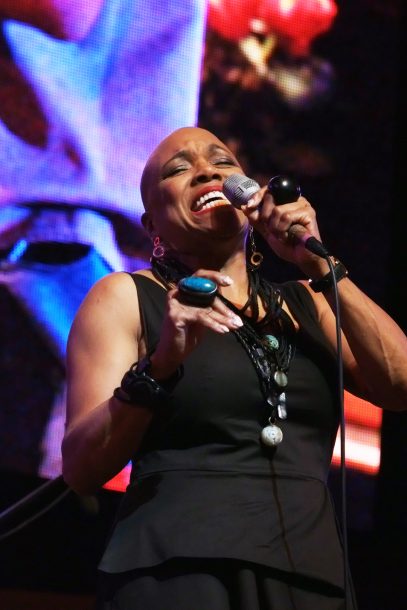 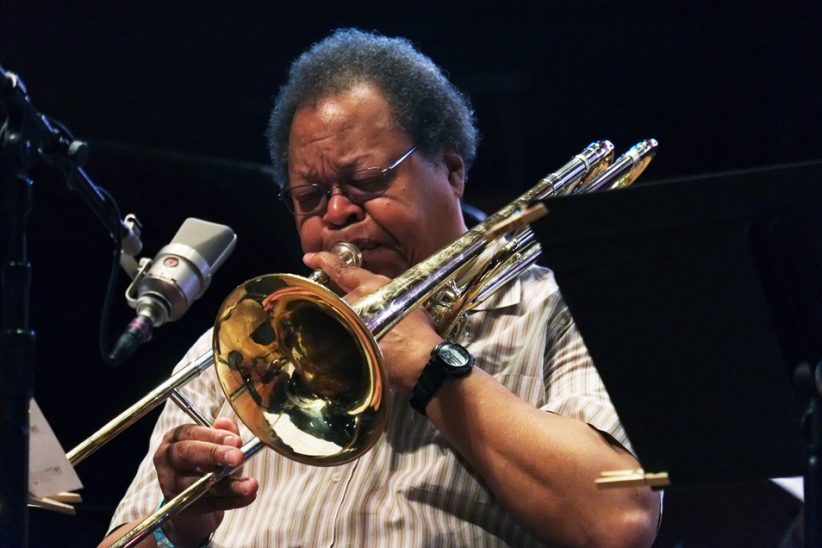 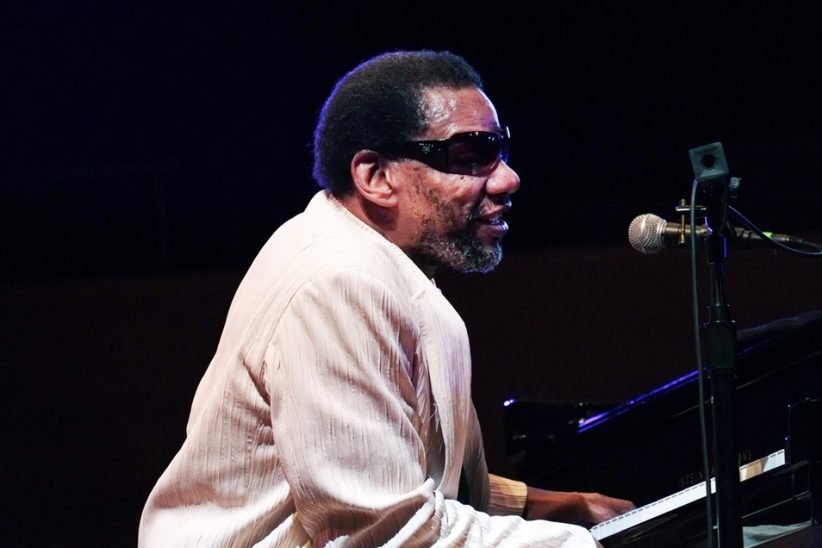 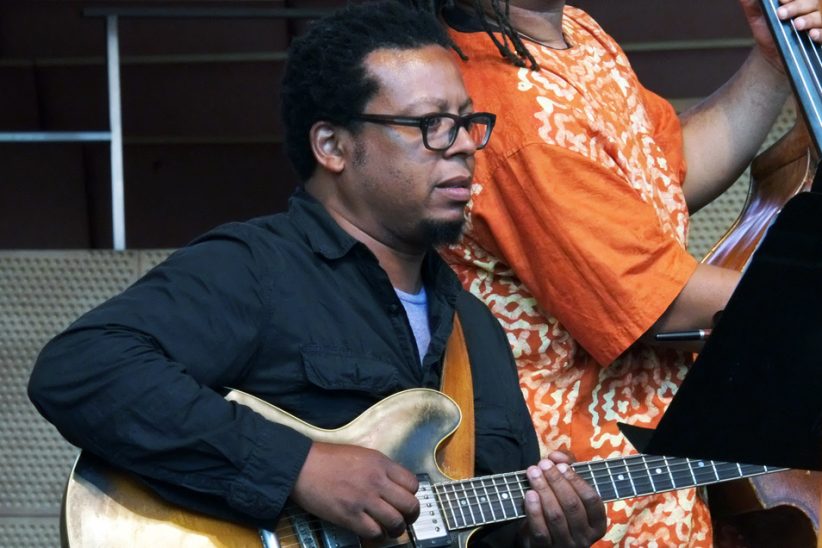 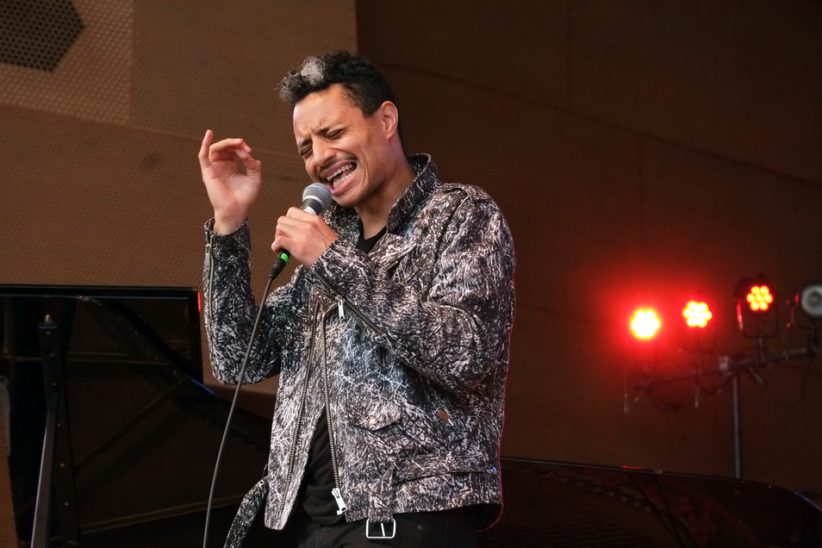 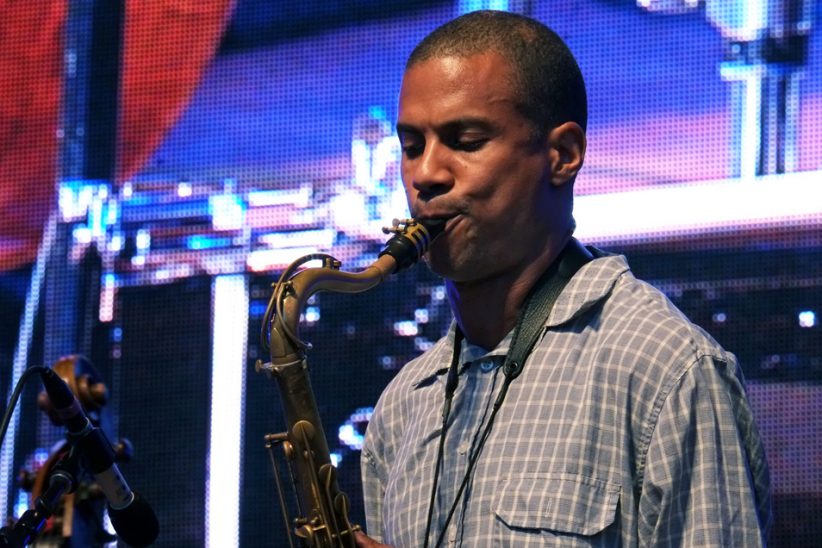 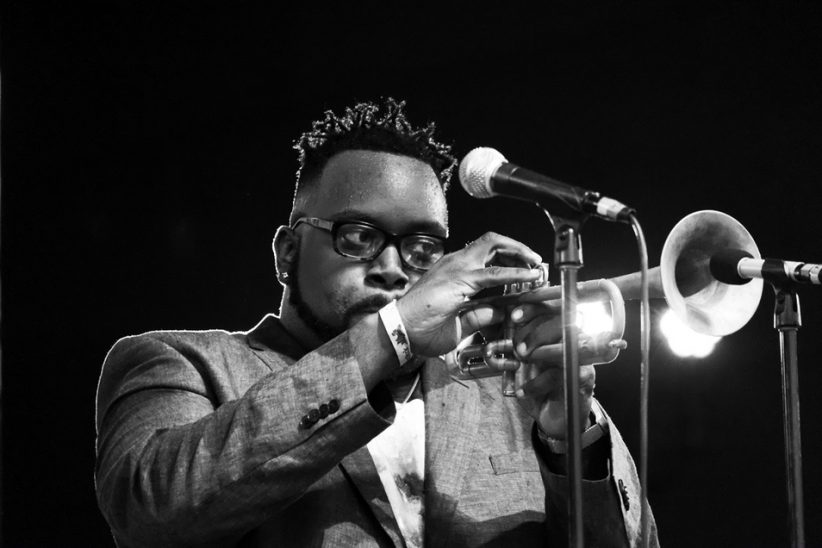 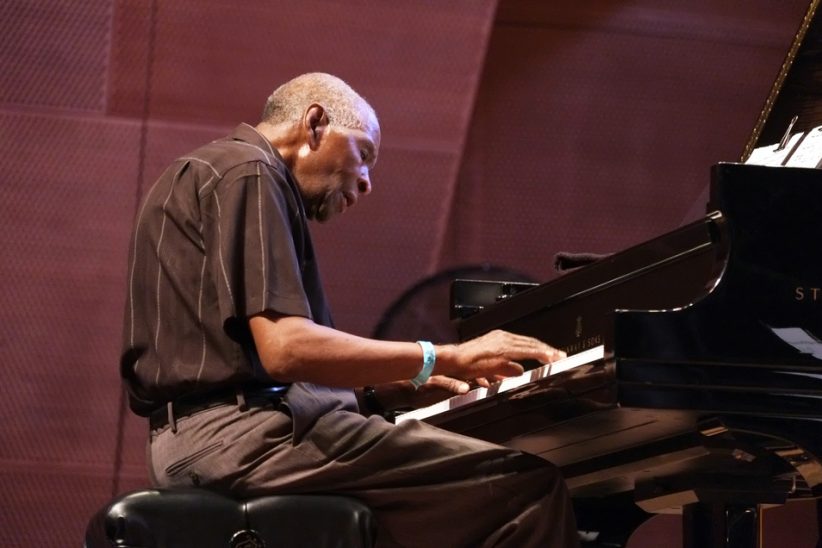 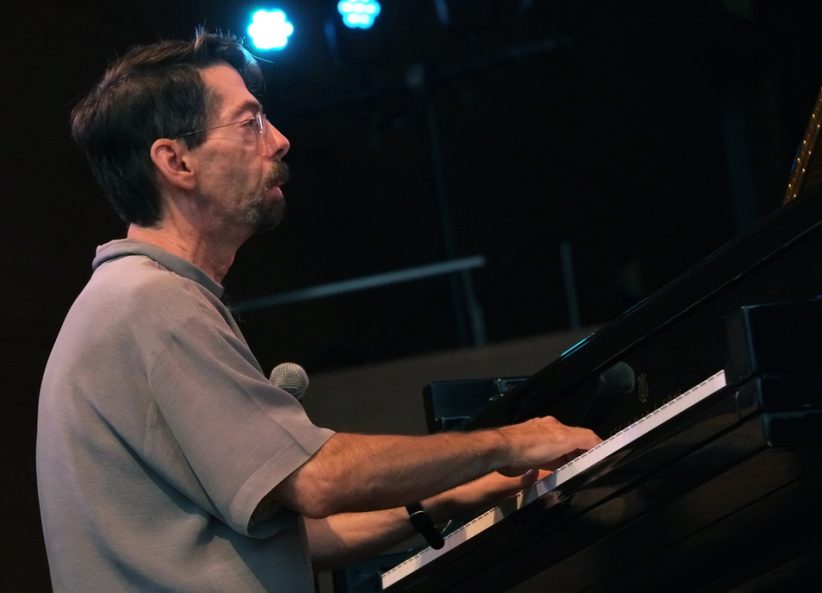 It doesn’t take a musicology detective to track the theme of this year’s Chicago Jazz Festival, which drew an estimated 140,000 to Millennium Park and the Chicago Cultural Center for a program that was heavily Chicago-centric if decidedly rangy. The thread running through the fest’s 37th annual edition, held over an unusually warm and muggy Labor Day weekend: the continuing influence of the Association for the Advancement of Creative Musicians, the collective of players and composers officially organized in 1965 by pianist Muhal Richard Abrams and others. The AACM’s emphasis on originality, innovation and experimentation continues to resonate among musicians in Chicagoland, New York, the West Coast and beyond.

The organization’s 50th anniversary called for a major performance at its hometown’s fest, and got a rare one, in the form of a closing-night set by Abrams’ Experimental Band on the Frank Gehry-designed stage of the Jay Pritzker Pavilion, home to the fest’s headliners.

The composition, which began with a ringing gong (and, inadvertently, sirens emanating from emergency vehicles racing down nearby Michigan Avenue), had bowed bass, horn stabs and fluttering piano lines feed into what felt like an awakening of kindred musical spirits. Then all dropped out except for McMillan’s flute, mournful and searching over the course of a long, unaccompanied solo. The piece proceeded in similar fashion, with players, alone and/or together, stretching out for unfettered flights, often incorporating sound effects, and the entire ensemble sometimes uniting for ferocious hits and syncopated accents, with call-and-response passages and simultaneous improvisations along the way. Cumulatively, it all added up to a performance of great intensity and surprising drama.

The group, a veritable Mount Rushmore of AACM luminaries, clearly didn’t disappoint devotees of creative music. Nor did other AACM-connected ensembles, notably the Jeff Parker Trio, led by a guitarist now based in L.A. Parker (Tortoise, Brian Blade), with drummer Chad Taylor and Chris Lopes on upright bass, specialized in long, lean, blues-inflected lines, building into inventive solos on a set including two tunes-“Days Fly By (With Ruby)” and “Ezra”-written for the leader’s children. Also affiliated with the AACM were performances by Douglas Ewart and Inventions, whose four brightly dressed female singers interspersed spoken-word passages with often wordless harmony vocals and individual lines, at one point referencing the Black Lives Matter movement, and turning in a reggae-fied take on Ornette Coleman’s “Lonely Woman”; and Steve and Iqua Colson, singer and pianist, leading a band featuring esteemed journeyman bassist Reggie Workman. “It’s traditional-our tradition, our original compositions,” Iqua Colson, a Chicago native based in New Jersey for 30 years, said of her group’s music (marred by stage-sound issues), and its debt to the AACM.

The festival got off to a roaring start with opening-night headliners Henry Butler, Steven Bernstein and the Hot 9, led by the New Orleans pianist and New York trumpeter, respectively. The two, joined by a trombonist, violinist, three reed players and a rhythm section, made like a little big band, punching out deep New Orleans grooves and turning in bracing solos on Jelly Roll Morton’s “Wolverine Blues” and “Buddy Bolden Blues,” Butler’s “Dixie Walker,” “Iko Iko” and Fats Waller’s “Viper’s Drag,” the title track from the group’s well-received 2014 album. Prior to that, trumpeter Marquis Hill and his Blacktet kicked off the fest’s Pritzker Pavilion performances with a stirring set of hard bop, including Monk’s “Straight, No Chaser,” bolstered by dazzling solo work from Hill, saxophonist Christopher McBride and vibraphonist Justin “Justefan” Thomas. Earlier on Thursday, James Davis’ Beveled provided some of the most beautiful, distinctively textured ensemble sounds heard at the fest, via a pianoless sextet with two flugelhorns (including Davis), two bass clarinets, upright bass and drums.

Dee Dee Bridgewater, Saturday night’s headliner, handily demonstrated her mettle as a resourceful jazz singer and as an enormously charismatic entertainer. She sang Oscar Brown Jr.’s lyrics for Mongo Santamaria’s “Afro Blue,” slipped in some scatting on “Love For Sale” and Michael Jackson’s “I Can’t Help It,” and rode a momentary reggae groove on “Save Your Love for Me.” Bridgewater turned up the sultry swagger on Harry Connick Jr.’s “One Fine Thing,” briefly referencing the Chiffons’ hit “He’s So Fine” before shifting to a quasi-spiritual mode for Abbey Lincoln’s “The Music is the Magic” and encoring with Stevie Wonder’s “Living For the City.” Earlier that day, tenor saxophonist Mark Turner led a pianoless quartet through sometimes cerebral if often riveting tunes and improvisations. And Kurt Elling was a surprise guest with drummer John Hollenbeck’s group, with Elling delivering sly readings of Kenneth Patchen’s poetry, and Theo Bleckmann augmenting those lines with beautifully measured vocals.

International flavors were on the menu, too, with soprano saxophonist Jane Bunnett’s all-female Maqueque band, featuring downright brilliant Cuban musicians (drummer Yissy Garcia is a star in the making) on originals and a stunning Afro-Cuban reworking of Bill Withers’ “Ain’t No Sunshine”; and the showy singing, gypsy-jazz textures, and fleet-fingered acoustic and electric guitar solos of French-born singer Cyrille Aimee’s group; and the Brazilian jazz of singer Neusa Sauer.

The 2022 Newport Jazz Festival’s three days of sunshine were bracketed, more or less, by a pair of all-star ensemble jams that included Christian McBride. … END_OF_DOCUMENT_TOKEN_TO_BE_REPLACED

In its first full edition since the onset of the pandemic, and with a new director of programming, the Festival International de Jazz de Montréal … END_OF_DOCUMENT_TOKEN_TO_BE_REPLACED

Among the many physical, spiritual, and institutional losses related to the still-ongoing pandemic is that of Los Angeles’ renowned Playboy Jazz Festival (PJF) at the … END_OF_DOCUMENT_TOKEN_TO_BE_REPLACED

It’s difficult to imagine what the stage and the audience would have looked like at Gaillard Center in Charleston, South Carolina, if Rhiannon Giddens’ new … END_OF_DOCUMENT_TOKEN_TO_BE_REPLACED