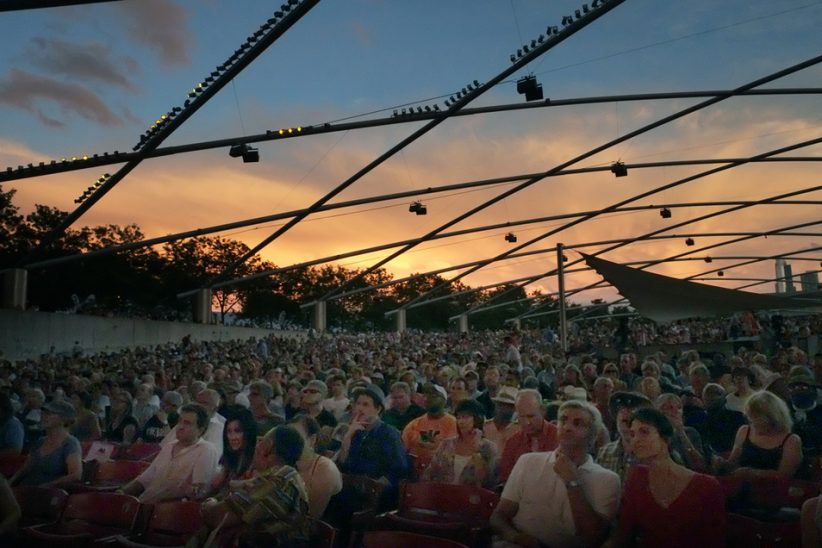 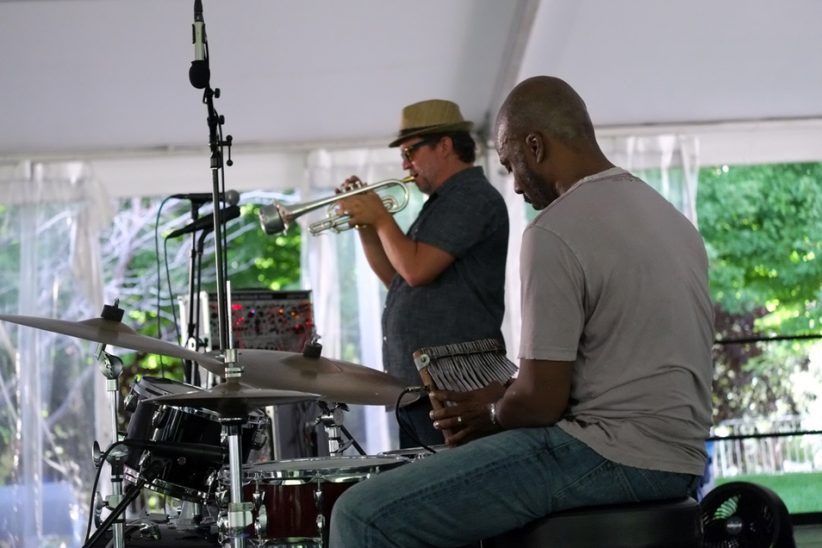 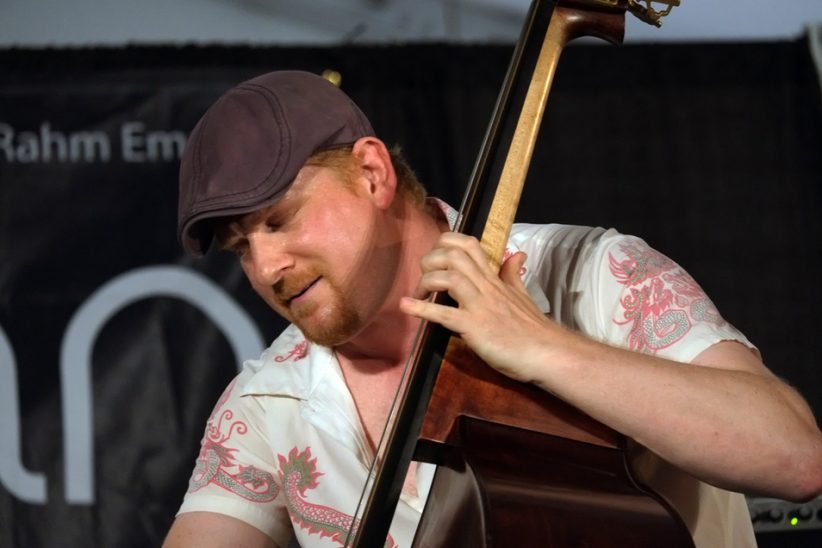 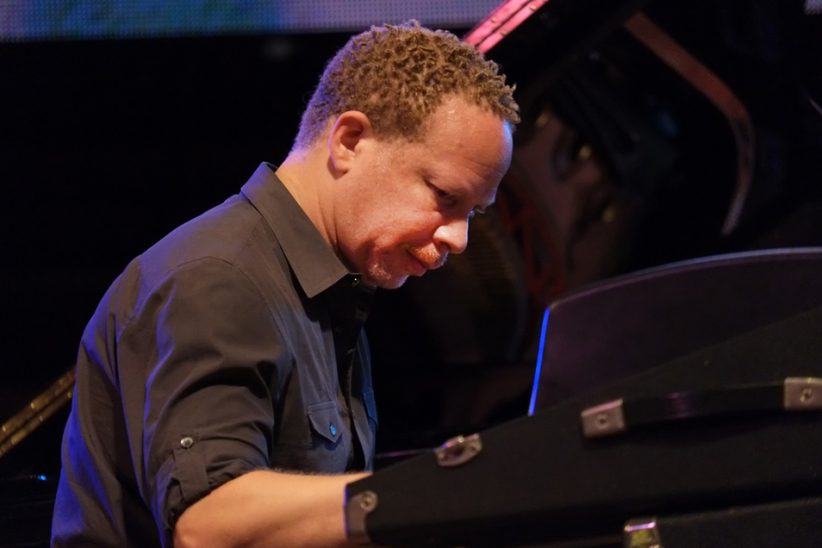 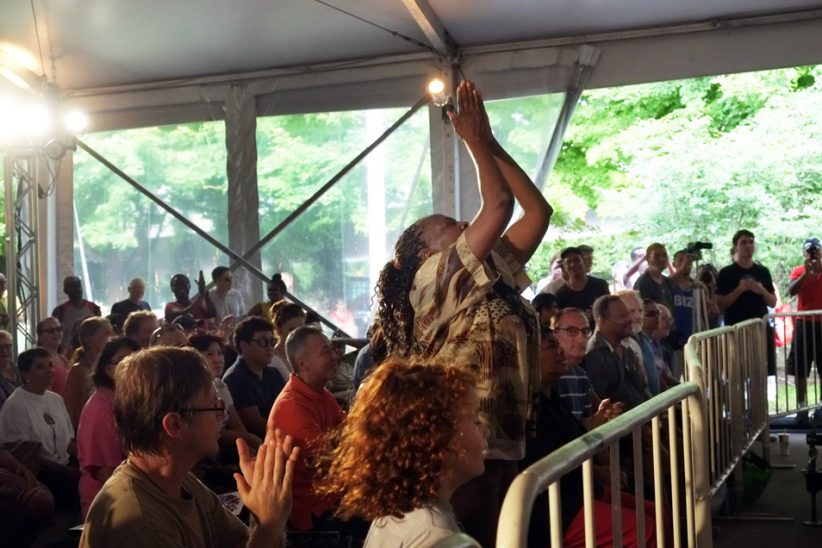 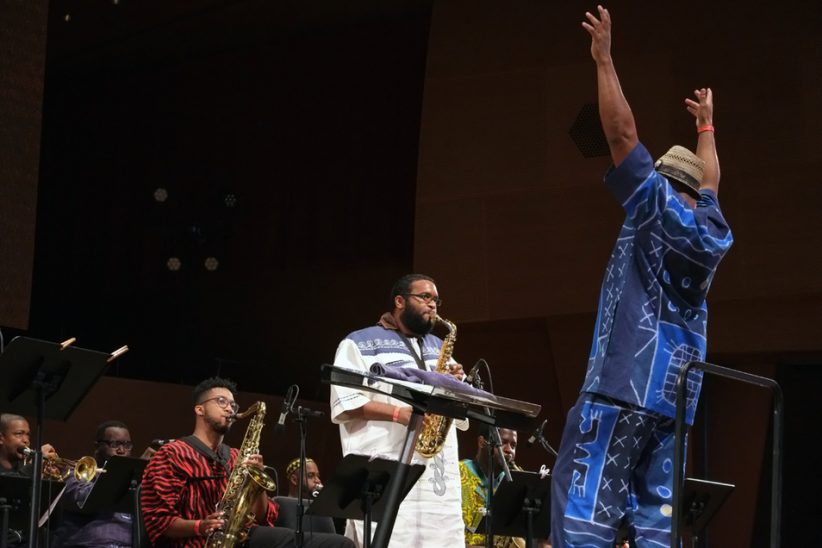 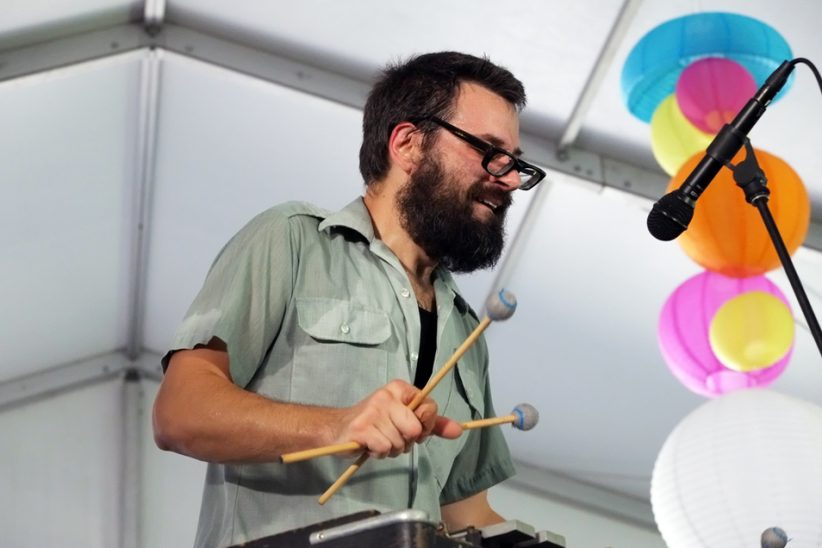 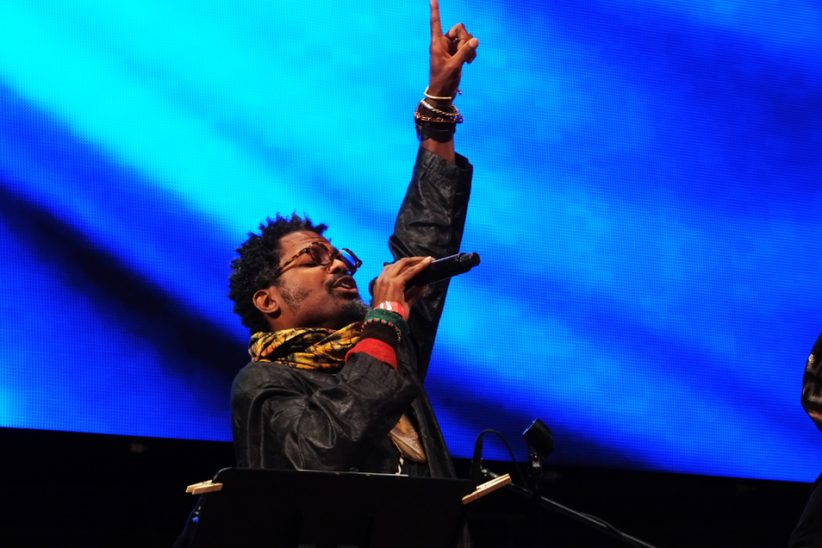 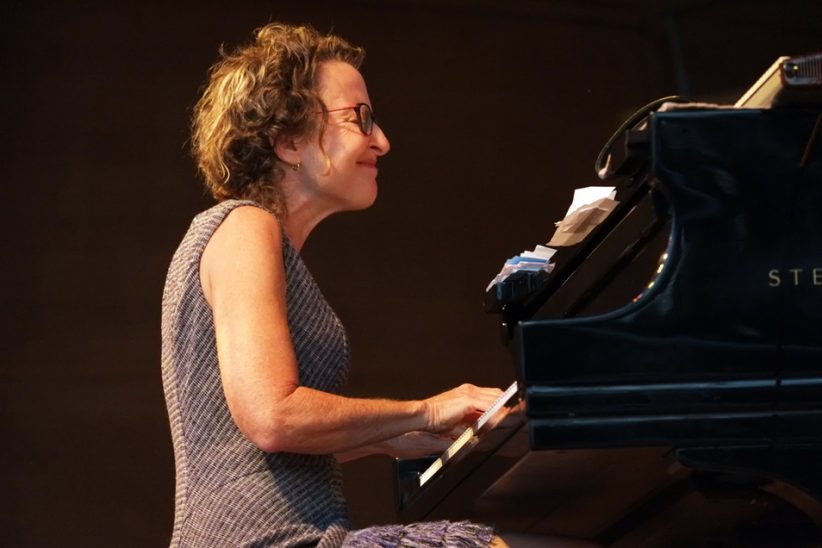 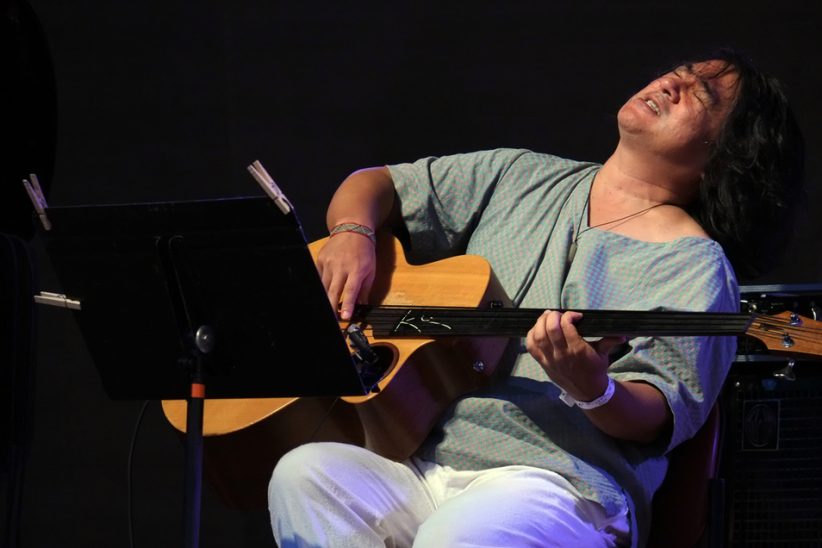 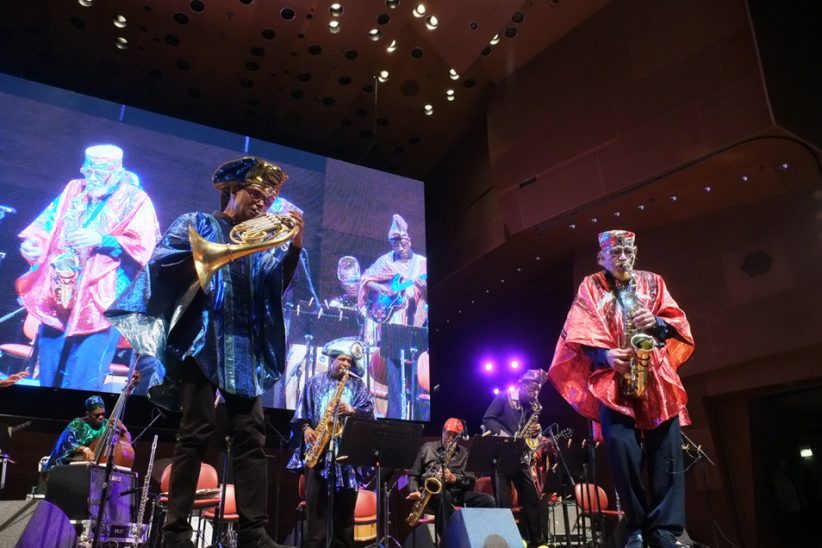 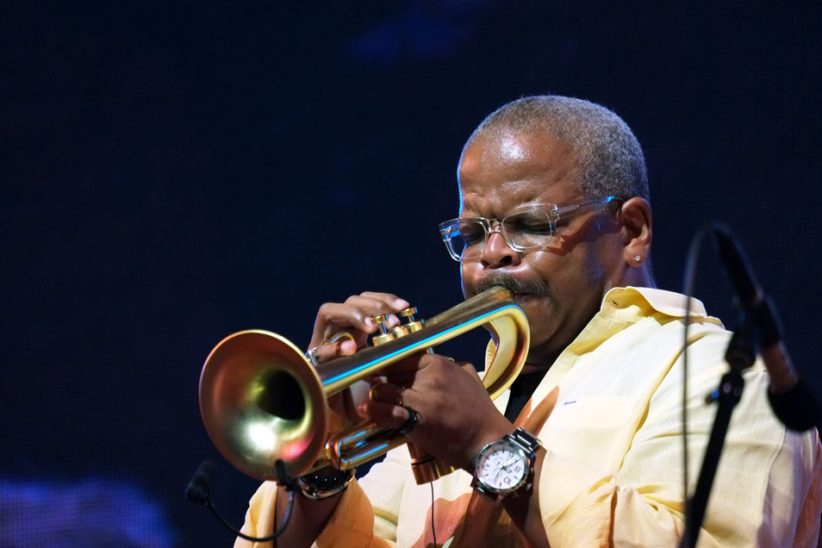 The Sun Ra Arkestra was slow to leave the stage at Millennium Park on Sunday night, wafting a blues ever higher, loosely marching, teasing the emcees by the side of the stage. During its set, the last at the 36th annual Chicago Jazz Festival, the large ensemble preached to a mixed congregation-from Sun Ra t-shirt collectors to the jazz oblivious-but it got its message across, projecting certainty and absurdism and maybe some ideas about survival.

Ra was born 100 years ago this past May; his sound and philosophical identity took shape during his decade and a half in Chicago. He died in 1993, and his band is now led by the alto saxophonist Marshall Allen, 90 years old and an Arkestra member for most his life. Bedecked as always in sequined robes and bright, wedged hats, the group lured you in with a sing-along opener, “Interplanetary Music,” its swing feel both heavy-footed and spectral. Then a ballad, almost misanthropically enchanting, blushing without romance. On “This World Is Not My Home,” the singer Tara Middleton incanted the title line. You were hearing a concert, maybe. You were interloping on a planning session for a prison break from the ozone layer.

Letting things evaporate might have been the best way to let go of this festival. Produced by the city’s cultural affairs department and curated by the Jazz Institute of Chicago, it was the kind of thing that gets you giddy about the present, about possibilities, but then doesn’t feel widely replicable: 40 bands, fabulously diverse, playing relatively long sets to huge crowds over the course of four days. It was all free, and almost all happened at three outdoor stages (plus a fourth with student bands on Saturday and Sunday).

Just one sticking point: There was no average listener at this festival, except for socioeconomically. Most of the visitors at Millennium Park seemed like they could have paid some admission price, though not all of them would have: Prior love for jazz was not a common denominator. It’d be really something to see a free, urban festival with thousands of visitors each day that could actually pull from a full sweep of its city’s residents. That would mean marketing broadly and flexibly, maybe even changing some things about the setup-or what is implied by a jazz festival.

If you arrived from out of town, it was a wake-up call: New York’s rival in the shadows remains, full of its old synergies and value systems and disinterest in wider regard. Tradition is flexible and reliable in Chicago. Newness is part of musicians’ duty and their list of options-not so much a main strategy or angle.

Ernest Khabeer Dawkins christened things on night one, Thursday, with the concert debut of Memory in the Center: An Afro Jazz Opera-a soul-opening suite in honor of Nelson Mandela. Dawkins, a saxophonist with homes in Chicago and South Africa, didn’t play his instrument. He conducted, moving the 16-piece orchestra through a pastiche that was abstract, straight-ahead, frustrated, enchanted, flirting with colossal. It had a Mingus temperament, but with different reference points. Baron is often seen as reinterpreting Ellington’s early-1940s golden age, while Memory in the Center had a surprising connection to a Jimmie Lunceford-like bounce, something from the ’30s. (Another corollary clearly exists to Archie Shepp’s 1972 Attica Blues, in temperament more than sound. And the piece’s final tune, a crowd-rouser, evoked classic South African folk music.)

When cloudy horns descended over a ballad near the end, you felt the confusion and the clarity of a nation in constant crisis, ours. That was before the Chicago-based poet Khari B read his powerful declamation, climaxing in a passage: “We know apartheid, Madiba … Your Boipatong massacres are our MOVE bombings/Your 34 striking mine workers are our Tulsa, Oklahomas.” After the performance, a man on vacation from India grabbed me to ask if I knew whether the suite had been recorded. I hope it will be soon.

Heavy moments took flight from that main stage. Myra Melford’s Eduardo Galleano-inspired band, Snowy Egret, practiced a kind of sensuous intellect. (That name, though-so unhip it’s offensive, which I guess is really cool, unless it’s not.) “Ching Ching/For the Love of Fruit” began as a quiet duet between Melford’s piano and Ron Miles’ muted trumpet-the pure, short tones were packed full, the long ones uninhibited. Stomu Takeishi, seated with an acoustic bass guitar and no shoes on, popped out of his chair once as if trying to fit himself inside a sound. During his solo, he let the instrument’s big, low notes overlap, to spar or embrace or kiss with teeth.

Tom Harrell brought a sextet with three horn players and two bassists, including Esperanza Spalding, who doubled on vocals. (Her singing is sounding remarkably more practiced and pitch-perfect than it was just a couple years ago, but retains a fresh, ruddy warmth.) Harrell presented seven well-balanced, aerial compositions, and together with the saxophonists Wayne Escoffery and Jaleel Shaw he shot thin melody sheets across the park. His soloing, bluesy and rustling and tart, was the blend of Miles Davis and Woody Shaw that has made him celebrated since the 1970s.

The bassist Dave Holland brought his newish quartet, PRISM, playing music that was rough and improbably beautiful-maybe the most listener-concerned fusion around these days. Craig Taborn’s Rhodes playing, half-buried under Kevin Eubanks’ barely-too-much guitar, was a low-key triumph as usual.

The vocalist Cécile McLorin Salvant dipped into her constantly growing repertoire of lesser-known classics, singing “Guess Who I Saw Today” and “John Henry” and “Nobody.” She revisits these artifacts-often with dated and overtly uncomfortable lyrics-in order to make us rethink the history, empower it, turn it around. She has an academic coldness that can work to her advantage, and it pairs nicely with devastating command. Weeks prior I saw Salvant at a small club in New York, and this sardonic, analytical, dispassionate thing had the crowd in stitches.

Maybe it has to do with Dunbar’s number, but this didn’t come through at the festival. Her long pauses and gritted punch lines got mum reactions, even in the seated area closest to the stage. Her vision is solid, but she’s young-just 24-with road tests and intuition-building still ahead. (She had the added weight of being the only singer to headline at the park’s main stage-its amphitheater seats 4,000, plus a lawn bigger than a football field.)

Two smaller performance tents were set up near the main stage and they hosted overlapping sets throughout the afternoon, before the evening’s major shows began. Part of the fun was bouncing between things, and comparing. The Chicago Yestet, a little big band, brushed together hard-bop with backbeats; across the plaza, the Tootie Heath Trio (featuring Ben Street on bass and Ethan Iverson on piano, with Heath on drums) made “Don’t Get Around Much Anymore” into a rock gag, and “The Charleston” into a shuffle. This was the looser, more believably personal form of fusion.

Then there were sets that reshaped the afternoon, that refused to let you move on until they were through. Sun Rooms, a Windy City trio centered around the walloping vibraphonist Jason Adasiewicz, packed the air with crossing patterns, dense but clear; the tent stayed full even after the set ended. The Chicago Underground Duo mixed rhythms from around the globe (Brazil, West Africa, New Orleans, on and on) and made sheet-metal sounds that scratched and squeezed. Rob Mazurek alternated between trumpet and synth-often with sickly strong power on the latter-and Chad Taylor pulled together structures on drums. The Chicago Underground Duo has been together for almost 20 years, laboring in the shadows, and you sensed the pair’s satisfaction at playing their hard-bargaining music to a big, startled, scintillated crowd. But the big beneficiaries were staring straight back at them.

The 2022 Newport Jazz Festival’s three days of sunshine were bracketed, more or less, by a pair of all-star ensemble jams that included Christian McBride. … END_OF_DOCUMENT_TOKEN_TO_BE_REPLACED

In its first full edition since the onset of the pandemic, and with a new director of programming, the Festival International de Jazz de Montréal … END_OF_DOCUMENT_TOKEN_TO_BE_REPLACED

Among the many physical, spiritual, and institutional losses related to the still-ongoing pandemic is that of Los Angeles’ renowned Playboy Jazz Festival (PJF) at the … END_OF_DOCUMENT_TOKEN_TO_BE_REPLACED

It’s difficult to imagine what the stage and the audience would have looked like at Gaillard Center in Charleston, South Carolina, if Rhiannon Giddens’ new … END_OF_DOCUMENT_TOKEN_TO_BE_REPLACED