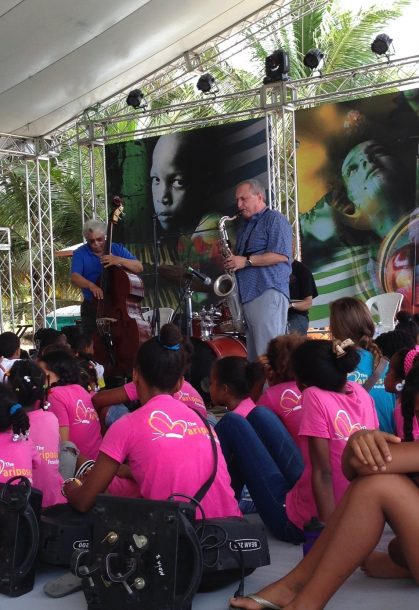 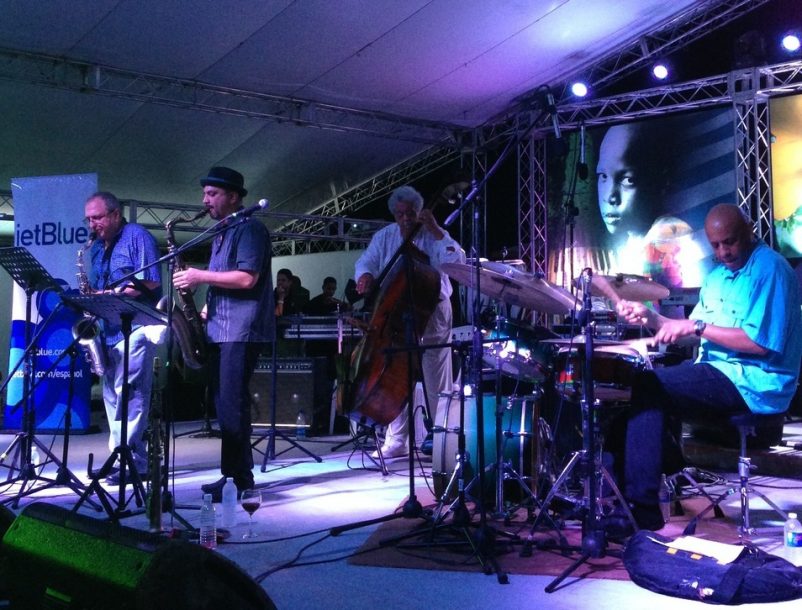 What connects the six groups I saw at the free, sweaty Dominican Republic Jazz Festival Oct. 31-Nov. 3? Energy and rhythm. In terms of power and spirit, three of the bands hit very hard. They went for it. And all but one of the performances featured either a hand percussionist, multiple hand percussionists or hand percussion at some point. The three nights of music I encountered in the Dominican Republic-I missed the first evening, when Bernie Williams and a group called Pengbian Sang and Retro Jazz played-included subtlety, but the big idea was one of drive and punch. The more cerebral acts, for instance, were assigned to open. The message was clear.

Italian saxophonist Marco Pignataro’s Trio Más was something you’d hear at a jazz club. With drummer Billy Drummond, bassist Rufus Reid and tenor saxophonist George Garzone as his house band-there were some sit-ins-Pignataro, a strong, smart player, gave a set that had swing and bebop in it. But this also seemed to be a performance tailored to the occasion. The hit opened with Joe Lovano’s “Alexander the Great” and closed with the Wayne Shorter-influenced Pignataro original “Grande Theodore,” but in between, the audience, seated beneath and around a tent on the beach in Cabarete, was offered a Jobim song, and “Naima” with a Latin groove underneath. When Pignataro explained that the first song was by Lovano, that bit of information was met by no special reaction from the house. But when Pignataro said that he was about to do a Jobim tune, the crowd got excited. And it got excited again when the melody was played.

A quartet co-led by electric bassist Abraham Laboriel and onetime Weather Report drummer Alex Acuña was special. The music, also conjured up by keyboardist Manuel Valera and tenor saxophonist Ivan Renta, was mostly a spiritual, instrumental mix of jazz and R&B. It was a bit smooth-the Crusaders came to mind-but earthy. The younger players, Valera and Renta, were solid. Fluent and studied. But they were outmatched by Laboriel and Acuña, both in their sixties. The bassist and drummer were experienced and stylish. They were making statements. Acuña’s solos were hard, loud, and intense, but when it was not his time to shine, you hardly noticed him. He was there to serve the music. The real star was Laboriel, though. Dressed in a long white shirt like a shaman or holy man, the bassist got low, sticky, and loose on a long five-string. His playing was raw and wild. And he was simply possessed by the music. At one point he came to the front of the stage, flailing and dancing and smacking his bass with his mouth agape. He was feeling the spirit and connecting with the audience on a deep, visceral level. The moment was emotional.

The most powerful music of the festival had little or nothing to do with jazz. Closing out the festival on Sunday night was the Dominican merengue legends Johnny Ventura and Milly Quezada, backed by an 18-piece orchestra. Five saxophones, two trumpets, three backup vocalists, four percussionists (no drum set) and an electric bassist, trombone, accordion and musical director/keyboardist strong, the band was fast, hot and unflinchingly grooving behind vocalists Ventura, 73, and Quezada, 58. The music, lifted up by Ventura’s smooth but gritty voice and Quezada’s throaty, spirited vocals, was ecstatic, daring you not to move your body. In the sweaty beach air, and just a stone’s throw from the ocean, those in attendance were dancing and singing along and generally having a blast. It was a real scene.

So what was missing at the 17th Dominican Republic Jazz Festival? There was no real musical risk-taking. Nothing experimental or outside the box. The festival could also use a theater space or small club. Of the three nights this writer attended, one was at an amphitheater and two were actually on the beach, alongside a row of restaurants. The beach nights were quite noisy. A real party atmosphere was in effect. Some of the more nuanced acts, like Pignataro’s group, would have benefitted from performing in more intimate environs.

The 2022 Newport Jazz Festival’s three days of sunshine were bracketed, more or less, by a pair of all-star ensemble jams that included Christian McBride. … END_OF_DOCUMENT_TOKEN_TO_BE_REPLACED

In its first full edition since the onset of the pandemic, and with a new director of programming, the Festival International de Jazz de Montréal … END_OF_DOCUMENT_TOKEN_TO_BE_REPLACED

Among the many physical, spiritual, and institutional losses related to the still-ongoing pandemic is that of Los Angeles’ renowned Playboy Jazz Festival (PJF) at the … END_OF_DOCUMENT_TOKEN_TO_BE_REPLACED

It’s difficult to imagine what the stage and the audience would have looked like at Gaillard Center in Charleston, South Carolina, if Rhiannon Giddens’ new … END_OF_DOCUMENT_TOKEN_TO_BE_REPLACED