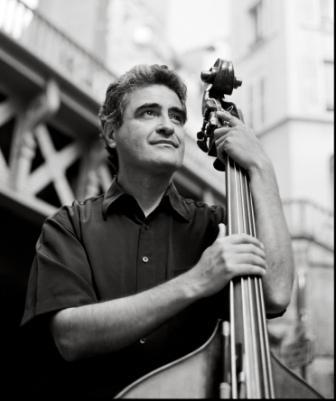 Jazz at Spoleto Festival USA has retained its basic contours fairly well, changing less radically and less frequently, than the series name itself in recent years, which has morphed from First Union to Wachovia to the current Wells Fargo Jazz in accordance with blips in the banking world. About the most pronounced new wrinkle for Spoleto 2012 was the programming of two headliners at the festival’s biggest venue, Gaillard Municipal Auditorium, instead of the customary one. Perhaps the intent was to keep the average at one, since Gaillard is closing down for extensive renovations, reopening for Spoleto 2014. As it turned out, before Virgìnia Rodrigues and Mavis Staples gave the final Spoleto jazz concerts at the old Gaillard, the threat of bad weather brought David Peña Dorantes away from the outdoor Cistern Yard venue at short notice and into the Gaillard. Just half an hour before Jake Shimabukuro was slated to perform at the Cistern, a heavy downpour threatened to send Jake and his ukulele packing as well. But Mother Nature relented. Still, the old Gaillard was rung out in grand style.

The swinging began promptly on opening night of the festival, May 25, at Cistern Yard with Cécile McLorin Salvant backed by the Aaron Diehl Trio. She drove in hard after Diehl’s piano intro with three choruses of “You Came a Long Way from St. Louis,” sandwiched around another Diehl solo, and drove even harder in “John Henry” after drummer Lawrence Leathers set the hammering tone with clanging cymbals. The rawness of this approach was sustained, as Salvant would snarl a couple verses and Diehl would solo until the singer’s outro. A couple of judiciously spaced duets cooled down the fever during the rest of the set, first a hook-up with Diehl on “You Gotta Give Me Some” and later a more intimate parley with bassist Paul Sikivie on “Mean to Me.” More often, Salvant swung the standards with an engaging élan, including “I Didn’t Know What Time It Was,” “From This Moment On,” a scat-filled update on Billie Holiday’s take on “I Only Have Eyes for You,” and for a rousing closer, “What a Little Moonlight Can Do,” peppered by Leathers’ fine brushwork. Yet the most crowd-pleasing number was the richly sassy “You Bring Out the Savage in Me,” with Leathers applying the mallets, Salvant evoking the orgasmic physicality, and Diehl adding the tropical notes, capped with a “Manteca” outro.

Although delayed by the weather-and the inevitable piano tuner-Dorantes and his trio were not deterred. The leader strode onstage and performed “A solas,” quickly demonstrating the range of classical and jazz techniques necessary to fully absorb the keyboard approaches of Keith Jarrett and Chick Corea, working under the hood of the piano with his left hand along the way. When the rest of the trio checked in for “Atardecer (Guajiras),” the Spanish Heart Corea mode emphatically dominated with percussionist Nano Peña gradually revving up his brushes to train-like intensity. If the opening piece had a brooding formal quality, the full trio showed a zestier, folksier bent. The racehorse opening of “Bulerias (Sin Muros ni candados)” seemed to be settling into a Trane-like (or should we say Tyner-like?) “My Favorite Things” obsession when Dorantes suddenly tacked into a calmer midsection with a loping “Autumn Leaves” flavor that vaporized into a solo by bassist Javier Moreno. Dorantes then jump-started the piece back into its opening fury. Pieces that followed all worked mercurially with different tempos, “Barrio Latino” mixing bop with flamenco, “Semblanzas de un río” giving us a restless Jarrett-like impression of a river, and “Caravana de los Zincalis” offering a sonic travelogue, easily the most varied, picturesque, and exciting of them all.

Gaillard was a more perfect venue for Rodrigues, becoming a holy temple for the uniquely intimate, passionate and mysterious performances she delivers with guitarist, and sometimes fellow vocalist, Alex Mesquita. From an English-speaking vocalist, the scatting, humming and assorted mouth percussion that we heard from Rodrigues would be perceived as an escape or liberation from language, but from this Brazilian priestess, who weaves her spells in Yoruba as well as Portuguese, it seemed like she was earnestly reaching across the barrier of language in a universal tongue. In her first appearance at Spoleto since her 2001 debut, Rodrigues heavily emphasized the melodies of Tiganá Santana and Baden Powell. Yet we surely owe a debt of thanks to the great lyricist Vinicius de Moraes, who also wrote a hefty chunk of the Jobim songbook, for the trove of Powell melodies transformed by Rodrigues: she pours so much heart into the words when she sings them. The 15-song set began with Santana’s “Ogum de Ronda,” touching off Rodrigues’ first scat explosion, but even more jubilation was lavished on Santana’s “Dembwa,” the penultimate song of the evening, where Mesquita delivered one of his many fine solos as Rodrigues danced around-with the same lack of self-consciousness as Thelonious Monk, but with added African mojo. Most exhilarating of all was the closer, Powell’s “Labareda,” an all-out vocal duet, that veered from harmony to counterpoint, with plenty of choice guitar-picking and mouth percussion tossed in toward the end.

There is enough ambient and audience noise captured on Renaud Garcia-Fons’ new Solo album to substantiate that he is playing all the sounds at his concerts in real time, rather than laboriously mixing them in a sound studio. But even watching him up close at the Simons Center Recital Hall wasn’t always enough to convince you that all of the sounds we were hearing originated from the unique five-string double bass that Garcia-Fons was wrapped around. With a special instrument, special strings and special tuning, Garcia-Fons usually plucks or bows in a cello’s register, more frequently soaring into a violin stratosphere than he dips down into the land of Wilbur Ware. Garcia-Fons not only commands the classical arsenal of double-bowing, ricochet bowing, and harmonics techniques, he adds a battery of percussive effects from a variety of impact points on his instrument, utilizing his fingertips, the palms of hands, and his bow. Occasionally, he’ll strum the bass as if it were a guitar, able to produce a tremolo effect.

Garcia-Fons’ feet also get into the act, calling up prerecorded backbeats and ostinatos, or helping to create fresh tape loops on-the-spot. Textures can be so rich, as Garcia-Fons mixes live and recorded elements, that pieces will occasionally evoke memories of recordings by the Roger Kellaway Cello Quartet or Oregon back in the Colin Walcott years. In all, Garcia-Fons played nine of the 11 pieces issued on his Marcevol Concert recording, most impressive on “Palermo Notturno,” climaxed with some superb reverb effects, and the ensuing “Voyage à Jeyhounabad, which built to a reverbed, Indian-flavored epiphany over a heavenly drone. There were still more delightful surprises to come, as Garcia-Fons produced a sitar-like sound on “Kalimbass” by threading paper through the strings, before taking us to an Edgar Meyers-like Appalachia with the bluegrass feel of “Pilgrim.” The Solo CD is matched with a companion DVD if you’re intrigued by this description.

Unlike Garcia-Fons, ukulele whiz Jake Shimabukuro couldn’t replicate, in live performance, all the instrumental voices found on his latest CDs, Grand Ukulele and Peace, Love, Ukulele. But the native Hawaiian brought some prodigious technique with him for his solo concert at Cistern Yard, following up his Spoleto debut of 2009. Shimabukuro’s sunny personality and eclectic repertoire seemed to wow the crowd. It must be said that we had a few respites from the saccharine quality of the uke: there was a banjo-like timbre and some amazing flamenco-like percussion on “Orange World” and a fine display of finger-picking in a cover of Adele’s “Rolling in the Deep.” Emulating a Japanese koto, “Sakura, Sakura” coupled an effective use of harmonics with the slick fingerwork, and “Blue Roses Falling” was filled with sound and fury. Otherwise, the precious treble could become cloying on “Missing Three,” the cover of Queen’s “Bohemian Rhapsody,” and the YouTube sensation that elevated Shimabukuro to celebrity, his cover of George Harrison’s “While My Guitar Gently Weeps.” After the gracious lull in the weather, Shimabukuro’s impressionistic take on the Beatles’ hit was fine music to hold hands on-with a gently rocking section in the middle.

Among the many physical, spiritual, and institutional losses related to the still-ongoing pandemic is that of Los Angeles’ renowned Playboy Jazz Festival (PJF) at the … END_OF_DOCUMENT_TOKEN_TO_BE_REPLACED

It’s difficult to imagine what the stage and the audience would have looked like at Gaillard Center in Charleston, South Carolina, if Rhiannon Giddens’ new … END_OF_DOCUMENT_TOKEN_TO_BE_REPLACED

“It’s time to imagine a place where we can come together,” Danilo Pérez said from the hallowed stage of Washington, D.C.’s historic Sixth & I … END_OF_DOCUMENT_TOKEN_TO_BE_REPLACED

At the Zeiders American Dream Theater in Virginia Beach, Va., between April 8 and 10, the Vocal Jazz Summit convened in person for the first … END_OF_DOCUMENT_TOKEN_TO_BE_REPLACED