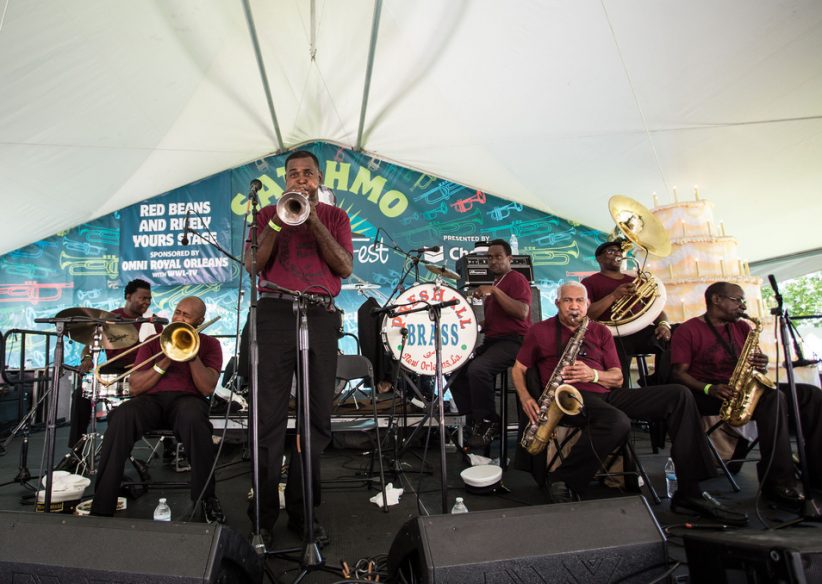 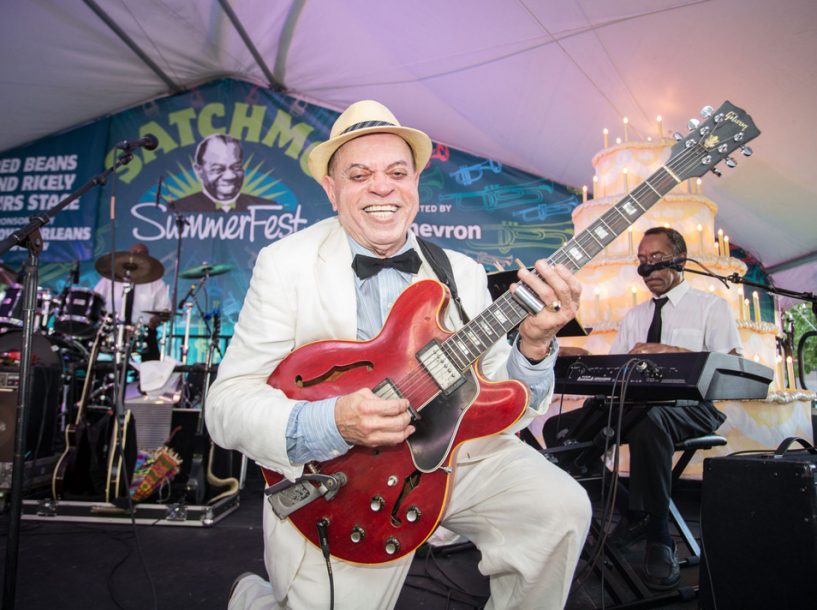 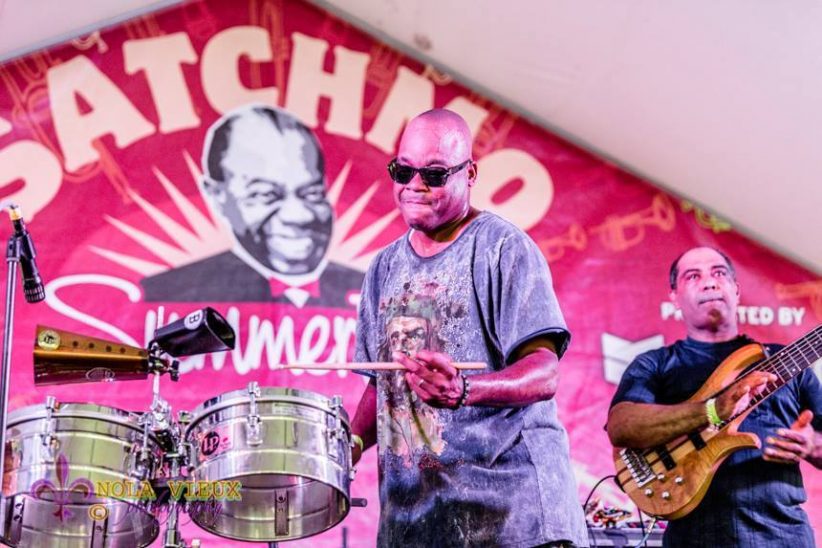 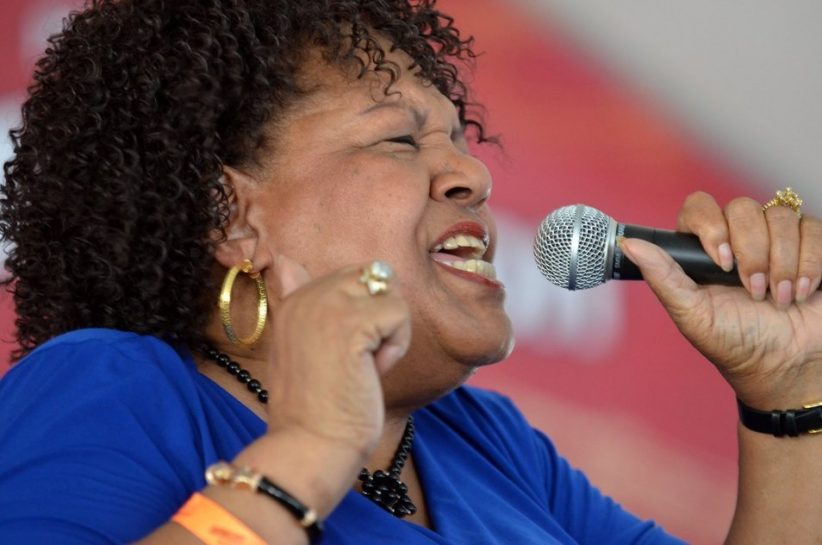 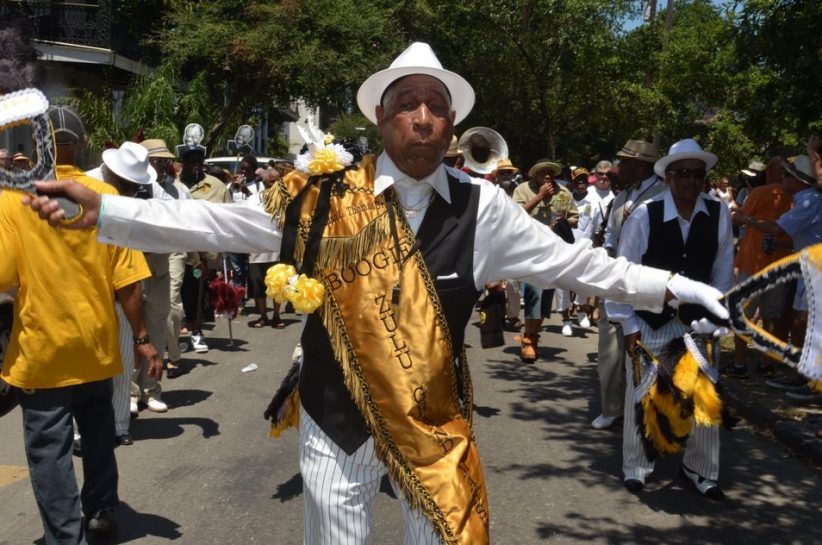 The 15th annual Satchmo Summerfest, held in New Orleans from July 31 to August 2, was yet another lesson on how to run a festival—with heart, soul, humor, class and lots of jazz. Presented by French Quarter Festivals, Inc., the festival, which ran from July 30 through August 2, was a swinging gem from start to finish.

This year’s festival coincided with the 100th anniversary of Louis Armstrong’s first professional gig as a 14-year-old at Henry Ponce’s honky-tonk. (Louis’ pal, “Cocaine Buddy” Martin, hipped him to the job). To mark the occasion, the Louis Armstrong House Museum and the Louisiana State Museum have joined forces in the exhibit, Satchmo: His Life in New Orleans. Held at the Old U.S. Mint (and there through January 2017), this powerful exhibit places in the same room the first cornet “Little Louie” received at the Colored Waif’s Home in 1913 with one of his last trumpets, a gleaming 1964 Selmer. From rare photos to Pops interviews to a brick and green railing (rescued from the Colored Waif’s Home in 1964 by Armstrong’s “white son” Jack Bradley), the exhibit is a moving experience.

On Thursday evening, Pops’ 1956 film High Society was shown at Le Petit Theatre on St. Peter Street. After the film, a second line parade wound back to the festival’s official hotel, the Omni Royal, for a resplendent opening reception.

On Friday morning a second line parade marched from Jackson Square up Decatur Street past the French Market to the festival grounds at the Old U.S. Mint. French Quarter Festivals Executive Director Marci Schramm presented the Spirit of Satch Awards to people “who contribute so much to our city, our music, and our culture.” The recipients were Dr. Connie Atkinson; Preservation Hall; Off Beat Magazine; Al and Linda Harris; Brenda C. Thornton; Louisiana State Museum; and Chevron, the major corporate funder of the festival. “Happy Birthday” was sung to Pops—and the festival was truly underway!

Now one humble writer can’t be everywhere at once—with two stages continuously presenting swinging New Orleans music and noted speakers talking about Louis Armstrong inside the cool of the Mint—but one can try. With apologies to those acts not seen or heard, here are some highlights:

*Tim Laughlin and Connie Jones: Clarinetist Laughlin and legendary cornetist Jones are right now playing some of the finest music in America, period. Their Sunday set at the festival—and their rollickingly soulful show at Snug Harbor on Saturday night—were, quite simply, perfect. Connie Jones is a national treasure.

*Yoshio Toyama and the Dixie Saints: Mr. Toyama is known as the “Satchmo of Japan” and he and his band make yearly visits to the festival. Beloved for his kindness and generosity—he delivered thousands of dollars worth of instruments to New Orleans schools after Hurricane Katrina—Mr. Toyama plays with fire and soul and love.

*Jewel Brown: Ms. Brown sang with Pops in the ’60s and both her interview with moderator Fred Kasten and her set were swinging affairs.

*Charmaine Neville and Ellis Marsalis: In separate sets, these two hometown icons showed why they are so beloved and respected.

*Donald Harrison: This hometown musician’s set was blazing from start to finish. (And his sister, Cherice Harrison-Nelson, was a righteous voice in Friday’s first symposium: Musical First Responders).

*On Saturday night Corey Henry’s Treme Funktet played a powerful set in tribute to the late Travis “Trumpet Black” Hill, who died in May in Japan. Tears were flowing.

*Being New Orleans, many of the local musicians are among the world’s greatest, and they played at Satchmo Summerfest as well: Steve Pistorius and the Southern Syncopators; Rebirth Brass Band; Leah Chase; Deacon John; the New Orleans Jazz Vipers; PresHall Brass; Robin Barnes; Kid Merv and All That Jazz; New Birth Brass Band; Sharon Martin; and Palmetto Bug Stompers. And in a fairer universe, the music of Meschiya Lake and the Little Big Horns would be spilling out of radios nationwide.

Inside the cool of the Old U.S. Mint, Satchmo seminars were being held on the third floor. Curated by Edward R. Murrow Award-winning journalist Fred Kasten and introduced by the charismatic Jon Pult, the seminars ran from 11:30 a.m. to approximately 5:30 on all three festival days. Among the ones heard:

*Dan Morgenstern—with Nat Hentoff and Whitney Balliett one of the three absolute greatest jazz writers of all time—gave a sly, truth-telling talk called “Louis Lets ‘Em Have It,” dealing with Pops’ appearance at the 1957 Newport Jazz Festival.

*Clarinetist Evan Christopher and trumpeter Jon-Erik Kellso gave an illuminating presentation on the rare-but-fruitful collaborations of Armstrong and Sidney Bechet. (They also played a storming set at Snug Harbor on Sunday night.) Kellso’s band the EarRegulars and Christopher’s Django a la Creole are two of the finest jazz band in the world today. Miss them at your peril.

*Singer Daryl Sherman was a festival highlight in 2014 and she did not disappoint this year. Her presentation, “Satchmo the Singer—Part Two,” was, in a word, perfect.

*Everyone was disappointed that the director of the Louis Armstrong House Museum, Michael Cogswell, couldn’t make the festival this year. Yet his presentation, “Louis Armsrong and Kids,” presented through Skype, was a heartwarming hit.

* “Satchologist” Ricky Riccardi was once again omnipresent with his superb (and heart-rending) film presentations, and his assistance with others’ talks. If a festival MVP award were to be given, Riccardi would definitely be the winner.

*Dr. Bruce Boyd Raeburn and Dr. Robert O’Meally gave fascinating talks—Raeburn on New Orleans character Jack Sheehan, who ran the Suburban Gardens, where Pops performed in the summer of 1931; and O’Meally on the blending of themes and spirit in the works of Armstrong, Romare Bearden and Jean-Michel Basquiat.

*This writer gave a talk on “The Morality and Righteous Heart of Louis Armstrong,” as well as “teaching” kids how to speak and scat like Pops in the festival’s truly special Pops’ Playhouse for Kids. Big thumbs up to A.J. Gaulton, the Playhouse’s curator.

The festival’s last set on Sunday evening was by the one and only Kermit Ruffins and his Barbecue Swingers, which led directly into Kermit’s Trumpet Tribute to Louis Armstrong, with Yoshio Toyama, Jeremy Davenport and many other trumpeters playing their hearts out for Pops. Beautiful ladies handed out cupcakes to the crowd and the 15th annual Satchmo Summerfest was history.

This is a heartfelt, lovingly curated, packed-with-soul festival that keeps growing finer and finer every year. Marci Schramm and her staff seem to whip up the miraculous every year. For the Pops lover, the food lover, the music lover, the New Orleans lover, the good times lover, Satchmo Summerfest is a genuine star in the American festival universe.

It was the warmest October on record in Seattle. Usually, when the Earshot Jazz Festival comes to town, it provides an escape from the autumn … END_OF_DOCUMENT_TOKEN_TO_BE_REPLACED

It was bracing to stroll into a brand-new creation for a story about destruction. Sixty years after its opening and 45 years after its last … END_OF_DOCUMENT_TOKEN_TO_BE_REPLACED

“You better start swimmin’ or you’ll sink like a stone,” Bob Dylan stated profoundly in 1963. Throughout its unrivaled 65-year history, the Monterey Jazz Festival … END_OF_DOCUMENT_TOKEN_TO_BE_REPLACED

For years, the Pittsburgh International Jazz Festival (PIJF) took place on the street. Over one weekend in June, Downtown thoroughfares Penn Avenue or Liberty Avenue … END_OF_DOCUMENT_TOKEN_TO_BE_REPLACED