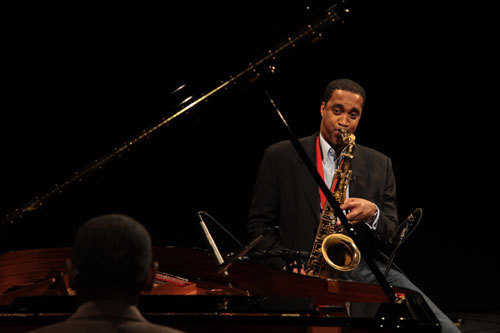 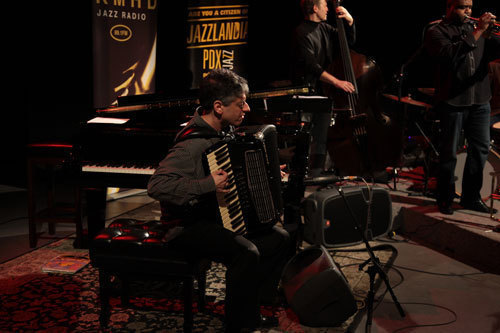 This year, the Portland Jazz Festival celebrated its 10th anniversary with one of its most diverse and ambitious line-ups to date. From Kurt Rosenwinkel to Kenny Garrett, Patricia Barber to Esperanza Spalding, Portland’s Blue Cranes to New York’s Matt Wilson, the 10-day event represented a cross-section of what’s happening now in Jazz. And, with an array of jazz legends including bop pianist Barry Harris, 94-year-old conductor Gerald Wilson and drummer Jack DeJohnette, (all NEA Jazz Masters), the festival certainly had its share of big names as well.

The Festival opened up with a sold-out show from the Afro Cuban All-stars. Shortly after the band’s pulsating Latin rhythms flooded the interior of the packed house at Portland’s Aladdin Theater, the audience was up out of their seats and dancing in the isles. The show continued in this manner for two raucous hours, until the (sweaty, grinning ear to ear) audience flooded the streets of southeast Portland.

On night two, it was Portland’s own Blue Cranes with a special guest, Seattle-based composer Wayne Horvitz. With Horvitz on keys, the band worked through a set of music from its upcoming release on Cuneiform Records (due in April), and original Horvitz compositions. This was one of a handful of shows put together specifically “for Portland only,” one of the festival’s new themes.

On the second Friday of the festival, another “for Portland only” show took place when six members of Art Blakey’s Jazz Messengers reunited for a performance under the musical direction of saxophonist Javon Jackson. The band worked through a range of Messengers tunes, including a special rendition of Curtis Fuller’s “Alamode” that allowed the 78-year-old trombonist to show off his chops a bit. Other members of the cast included Eddie Henderson, George Cables, Bobby Watson, Buster Williams and, taking the place of Art Blakey, drummer Lewis Nash.

The Portland Jazz Festival doesn’t happen in one place, it’s a citywide happening, and this year, the festival moved into a new venue for a special show. The Kurt Rosenwinkel Quartet took the stage at Lewis and Clark College in front of a sold-out audience and played songs from Rosenwinkel’s new recording, Star of Jupiter. Rosenwinkel’s playing was transcendent, but the real magic took place between two new members of the quartet, drummer Justin Faulkner and bassist Eric Revis (both known for their playing time with Branford Marsalis).

DeJohnette delivered a set that left the audience of Portland’s Newmark Theater in awe of the drummer’s skill, and for highlighting the players in his quartet. That quartet usually includes saxophonist Ravi Coltrane, but due to a shoulder injury, Coltrane couldn’t make the gig. Don Byron replaced Coltrane in the band (making this his third appearance at the festival) and melded seamlessly into the quartet, switching between saxophone and clarinet. Pianist George Colligan delivered an exciting performance that demonstrated his fantastic abilities on electric and acoustic piano. Matthew Garrison (the son of the late Jimmy Garrison) played a five-string electric bass augmented with effects pedals. The band moved between free improvisation and written music, but the biggest surprise of the evening was the final tune, DeJohnette’s rendition of the late Jim Pepper’s “Wichi Tai To.” Pepper was a fixture in the Portland music scene and it felt as if his spirit was in the building that night.

Legendary conductor/arranger/composer Gerald Wilson led two groups at Portland’s premiere jazz club, Jimmy Mak’s, in the middle of the festival schedule. What was most impressive was to watch Wilson’s vigor as he brought out the best of an orchestra comprised of students from Portland State University and then a cadre of local professional musicians.

Matt Wilson’s Arts and Crafts stood out as one of the most fun performances of the festival. They played to two different receptive, goading audiences at Jimmy Mak’s and, in an afternoon set, at KMHD’s studios sponsored by PDX Jazz. Wilson’s ability to “interpret” what the band is doing to the audience is a rare gift in jazz, as is his tasteful and exciting playing style. The fun these four musicians have together on stage is palpable.

The West Coast premier of ACS (Geri Allen, Esperanza Spalding, Terri Lyne Carrington) was the “curtains” for the 10-day event, and these three skilled musicians ensured that the it closed on a high note. Allen’s nuanced piano technique, coupled with the tasteful drumming style of Carrington, meshed excellently. Portland residents are used to watching Spalding’s skill on stage, but her virtuosic talents were especially on display in this setting. The trio moved between standards and a few original Allen compositions. At the end of their set, they were rewarded with two standing ovations.

The 10th anniversary of the Portland Jazz Festival lived up to the hype. Almost every show was sold out, and the audiences and musicians interacted with each other in a way that demonstrated the true power and the special nature of live jazz. This festival also demonstrated that, at a time when festivals are supposed to be in decline, the diverse sounds of this music can be presented, and celebrated, by equally diverse audiences.

Matt Fleeger is the Program Director of Portland’s only full-time Jazz Radio station, 89.1 FM . He’s the host of “New Jazz For Lunch” weekdays from noon to 1 PM (PT). He also contributes regularly to NPR music.

The 2022 Newport Jazz Festival’s three days of sunshine were bracketed, more or less, by a pair of all-star ensemble jams that included Christian McBride. … END_OF_DOCUMENT_TOKEN_TO_BE_REPLACED

In its first full edition since the onset of the pandemic, and with a new director of programming, the Festival International de Jazz de Montréal … END_OF_DOCUMENT_TOKEN_TO_BE_REPLACED

Among the many physical, spiritual, and institutional losses related to the still-ongoing pandemic is that of Los Angeles’ renowned Playboy Jazz Festival (PJF) at the … END_OF_DOCUMENT_TOKEN_TO_BE_REPLACED

It’s difficult to imagine what the stage and the audience would have looked like at Gaillard Center in Charleston, South Carolina, if Rhiannon Giddens’ new … END_OF_DOCUMENT_TOKEN_TO_BE_REPLACED