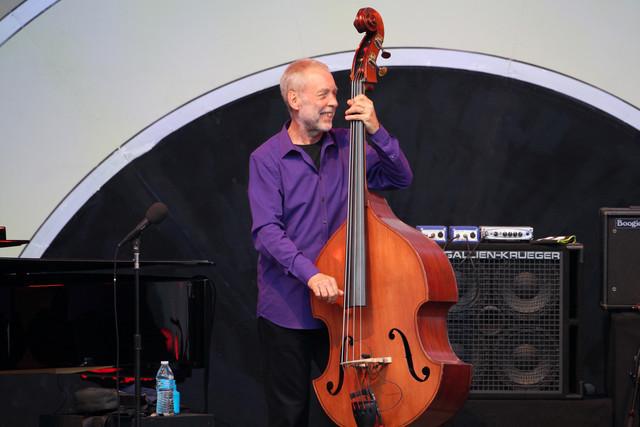 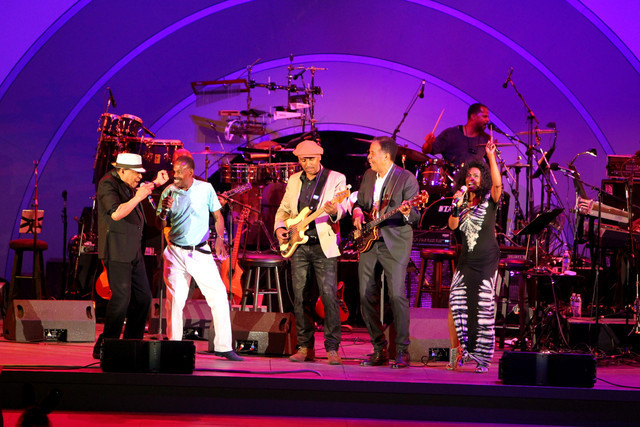 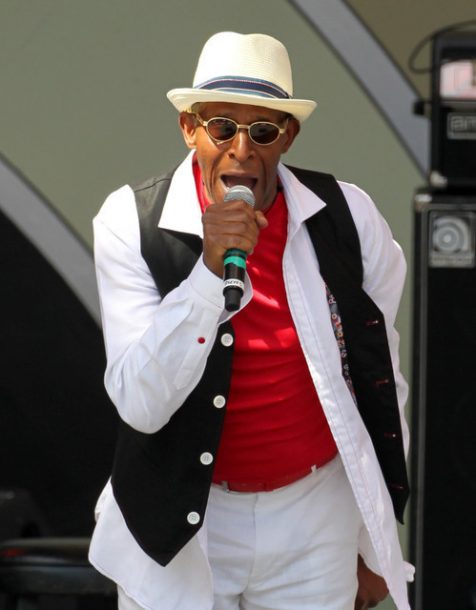 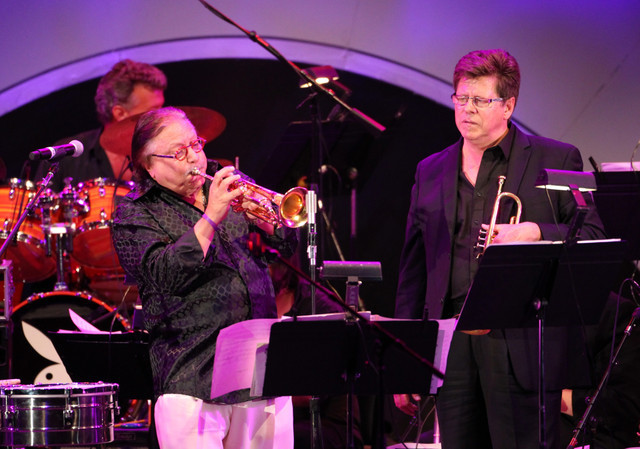 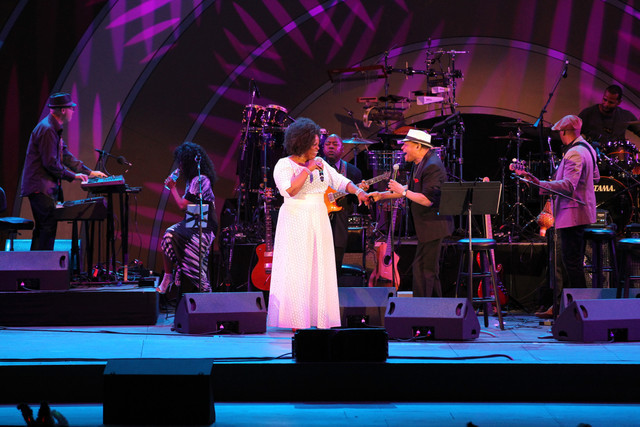 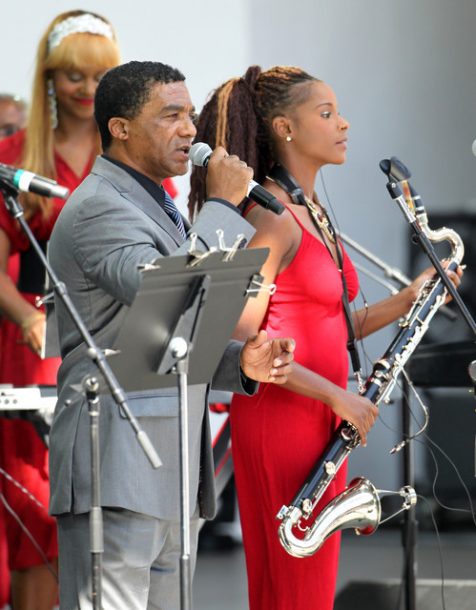 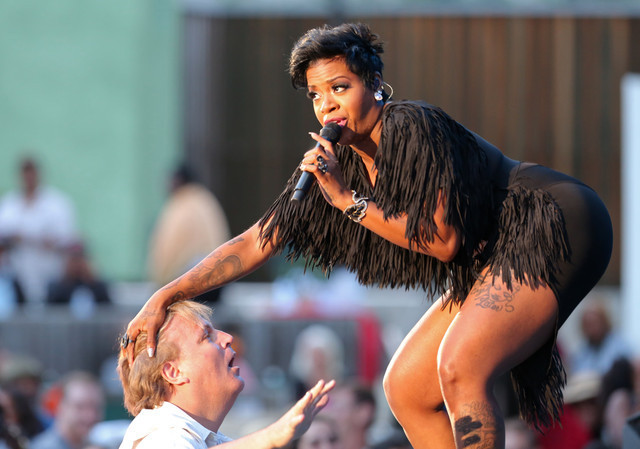 Fantasia at the 2014 Playboy Jazz Festival 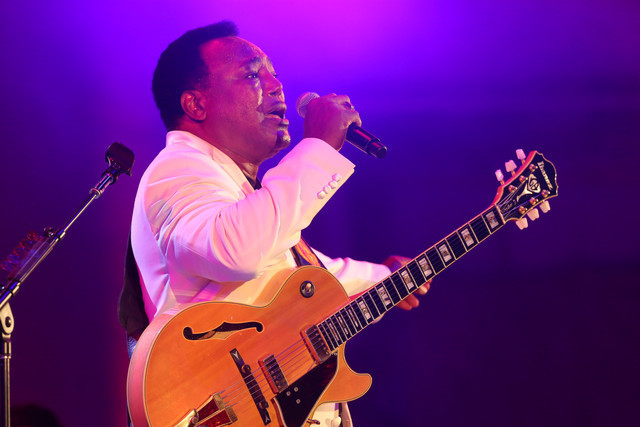 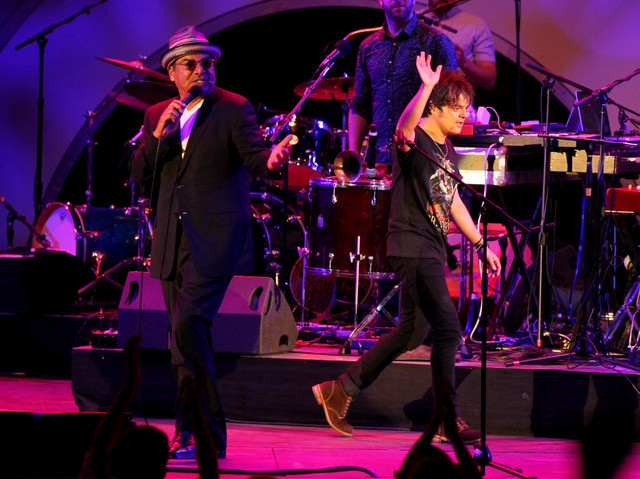 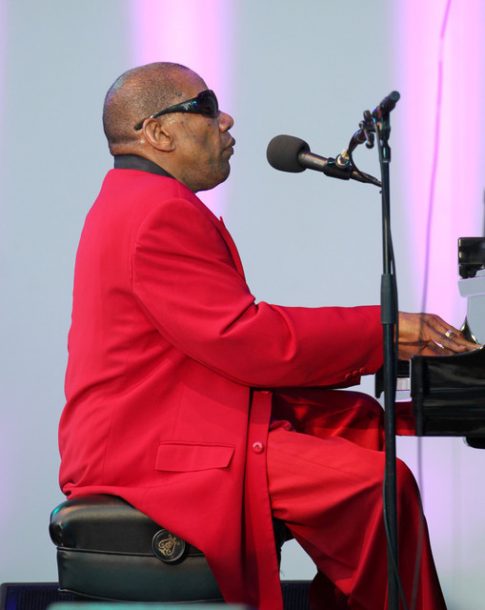 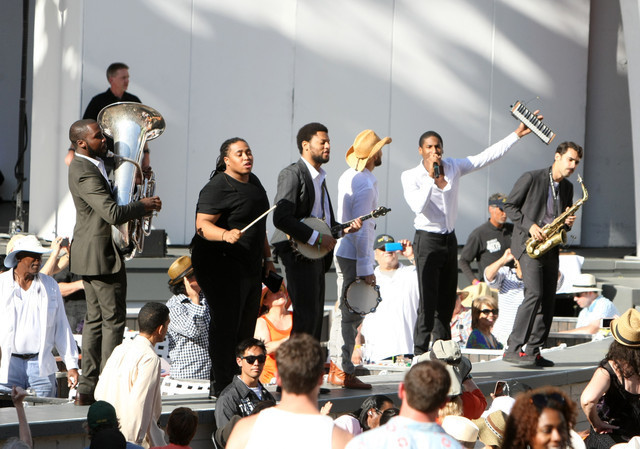 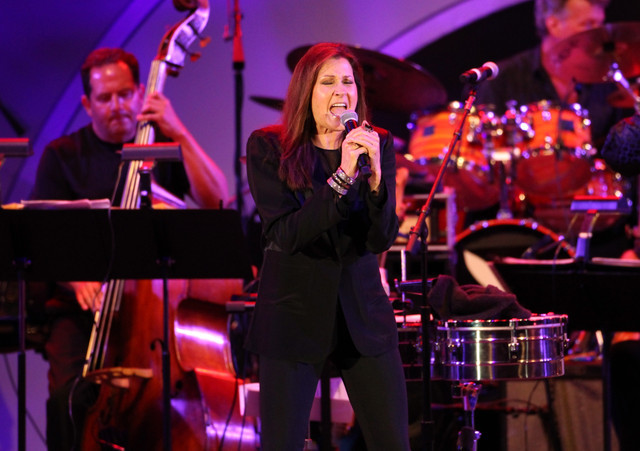 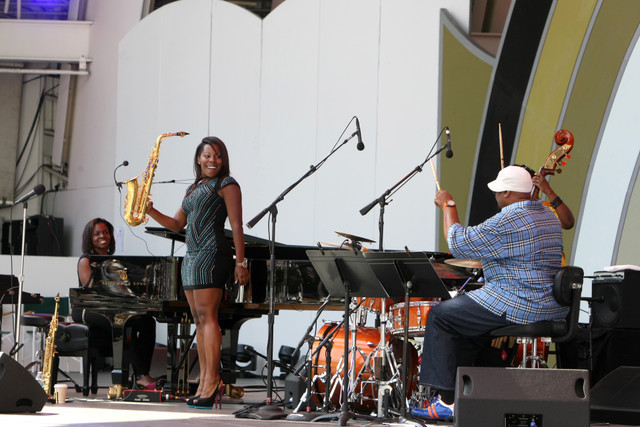 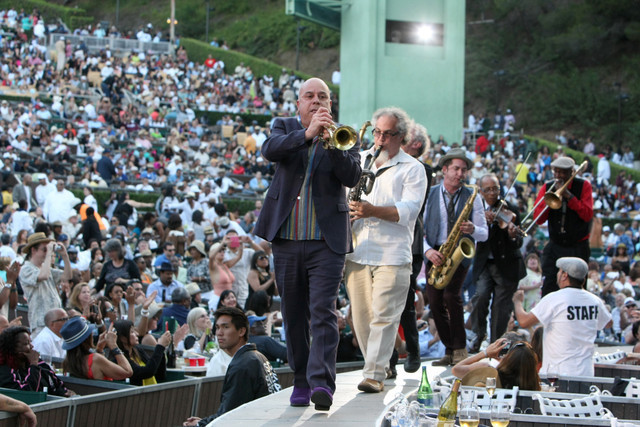 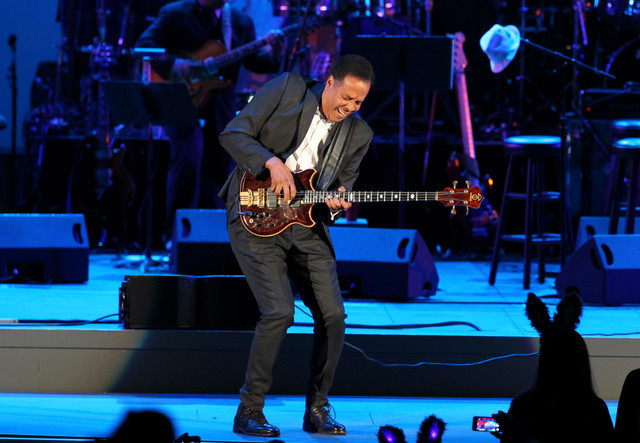 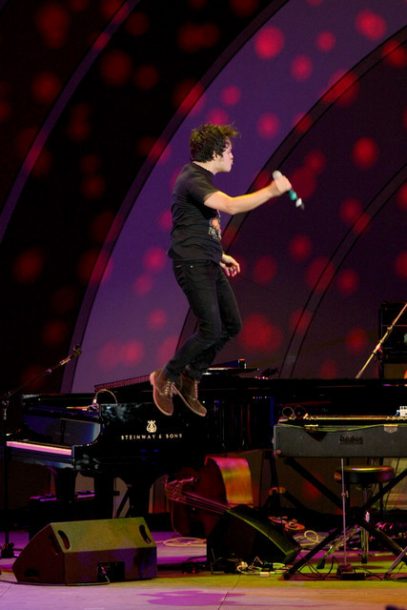 at the coliseum-like Hollywood Bowl. Nonetheless, the two days of the event’s 36th installment, hosted by comedian/actor George Lopez for the second year, were different in theme and scope. Saturday, June 14, the opening day, incorporated a melding of jazz variations. In comparison, Sunday abounded with blues, Cuban, fusion, contemporary, funk and pop stylists, with a scant amount of mainstream jazz.

The Kenny Barron Trio with special guest Ravi Coltrane left little doubt of their jazz cred during a fast-paced five-song set. The group’s original “And Then Again,” along with Monk’s ballad “Ask Me Now” and the rollicking “Well You Needn’t,” were drenched in bebop bolstered by stellar interactions and solos. From a big band standpoint, Arturo Sandoval led some of L.A.’s top musicians, including Bob Sheppard and Rusty Higgins on saxophones, Wayne Bergeron on trumpet, Andy Martin on trombone and Mahesh Balasooriya on piano, with actor Andy Garcia sitting in on bongos. Tripling on soaring trumpet, percussion and keyboards, Sandoval was a powerful force who relaxed only when Monica Mancini sang her father Henry’s “It Had Better Be Tonight” and the Spanish hit “Quizas Quizas,” along with Patti Austin doing “Lady Be Good.”

Dianne Reeves, a PJF favorite, performed a nuanced set with a scorching nine-person ensemble that enlivened the Bowl crowd. Among her mix of songs were Fleetwood Mac’s rock/pop “Dreams,” Bob Marley’s “I Don’t Want to Wait in Vain for Your Love” and a bolero tribute to Celia Cruz. Additionally, Reeves threw in Marvin Gaye’s indie soul classic “I Want You” and the gospel-soaked “Just Say it.”

In the class of young, emerging innovators was British singer/keyboardist Jamie Cullum, also a PJF favorite. He continuously jumped around the stage, on the piano and the amphitheater’s section divider. Through all the amusing mayhem, Cullum, working with a spry quartet and small brass section, thrilled the audience with the new jack swinging “That’s OK,” “Just One of Those Things” and “Love for Sale.”

Also in that category, but with much less animation, was saxophonist Tia Fuller. She and her quartet, which included her sister Shamie Royston on piano, Mimi Jones on bass and Terreon Gully on drums, played bebop and Latin-flavored originals, such as “Ralphie’s Groove” and “Angelic Warrior.” Injected into the set was the bandleader singing “Body and Soul,” dedicated to Dianne Reeves, whose band she and Gully played in later.

The contemporary/fusion-themed “Celebrating George Duke” headlined the first day of the festival as a remembrance of the long time PJF favorite, who died less than a year ago. Notable friends/collaborators Al Jarreau, vocals, and Stanley Clarke, electric/acoustic bass, led the proceedings. Jarreau gleefully sang Duke’s bossa-tinged “Summer Breezin'” and became more excited when Reeves joined in for a blissful version of “Someday.” Clarke strongly represented fusion with the rocking/funky “Wild Dog,” and the refined “Brazilian Love Affair” strongly contrasted it with the full ensemble and Reeves. Drummer Ndugu Chancler playing percussion, jumped out front to zealously lead Duke’s very funky and raunchy “Dukey Stick” early on and for the grand finale, George Clinton’s Parliament/Funkadelic-inspired “Reach for it.”

New Orleans music has become an integral part of PJF in recent years, and pianist Henry Butler, trupeter Steven Bernstein and the Hot 9 was definitely among that ilk. They wasted little time getting the audience’s attention through a festive Mardi Gras romp and then shifted to the progressive original, “Vipers Drag,” which bordered on the avant-garde. The set included Jelly Roll Morton’s “Wolverine Blues” and “I Thought I Heard Buddy Bolden Sing,” highlighted by Butler’s vocals. The ensemble ended as it started, partying through the staple “Mardi Gras Mambo” on the section divider, while Butler whipped up a frenzy vocally and instrumentally.

For something completely different, 25-year-old hippie in a former life,Allen Stone sang Stevie Wonder- and Marvin Gaye-styled songs appealingly with 21st century jam-band sensibilities. He caught the crowd off-guard with rich soulful singing and quickly had them swaying to “Million,” “Voodoo” and “Satisfaction.”

Antonio “Huggy Bear” Fargas (of the ’70s Starsky and Hutch TV show and black exploitation film fame), his group the New Jump Blues and his backing singers waere a throwback to the pre-rock days of Johnny Otis, Louis Jordan,and Cab Calloway. Their set included the Caribbean-flavored “Rum and Coca-Cola,” “How a Man Says Goodbye” and the vintage R&B classic “Mama He Treats Your Daughter Mean.”

For the final day of PJF, the ever-reliable contemporary crooner/guitarist George Benson thrilled the audience with his hits “Give Me the Night,” “Turn Your Love Around ” and the blockbuster “Masquerade.” Fellow guitarist Earl Klugh’s easy -lowing “Living Inside Your Love” was showcased too, and the musicians meshed for lively exchanges, including the closer “On Broadway.” Somewhat related, Dr. Lonnie Smith maintained the funk with his In the Beginning Octet. His ensemble, which included brass players, was a stimulating blend of James Brown, Jack McDuff and Jimmy Smith. Morever, he kept the grooves coming and in closing wowed the audience with his funky bass cane.

Another shot of New Orleans occurred with Jon Batiste and Stay Human, part of the emerging new breed on the Louisiana scene. Keyboardist Batiste embodied characteristics of modern soul singers John Legend and Pharrell Williams. Yet, he never forgot his roots, featuring the L.A. Unified School District Honor Marching Band for a rip-roaring “Loving is the Only Way.” Over-the-top versions of Scott Joplin’s “The Entertainer” and the immortal classic “St. James Infirmary” were astounding. And an acoustic, traditional version of “Sunny Side of the Street” garnered the celebratory handkerchief treatment.

Fusion reappeared with Dave Holland’s Prism, who mightily ripped through their compositions “A New Day” and “E-volution,” which echoed the work of Miles Davis’ In a Silent Way and John McLaughlin’s Mahavishnu Orchestra. For a change of pace the group, also consisting of guitarist Kevin Eubanks, drummer Eric Harland and keyboardist Craig Taborn ventured into Caribbean rhythms for “Choir.”

The only blues artist on the bill was James Cotton, with special guest Big Jay McNeely. They, unfortunately, were the opening band and many of the attendees missed the legendary harmonica player doing classics “I Wonder Who’s Loving Her Now?” and “Got My Mojo Working.” For comic relief McNeely honked on his sax and sang “A Big Fat Mama,” along with the ballad “Do I Ever Cross Your Mind.”

Juan de Marcus merged the Cuban textures of Buena Vista Social Club, Los Van Van and Irakere in his 13-person Afro Cuban Band, touching on salsa, cumbias, sons and cha-chas. Hip hop didn’t surface much at PJF, but Jose James’ urban crooning tried to make up for the deficit. Most of his songs, such as “A Place in My Heart” and “While You Were Sleeping,” were downcast and atmospheric. James received a better response when he shifted to more upbeat material such as Al Green’s “Simply Beautiful,” the sweet-sounding acoustic guitar-accented “Come to My Door” and the Gil Scott-Heron-styled “Trouble.”

American Idol alumnus Fantasia was impressive with her “me against the world” vocalizations. Her set was action-packed, resembling Beyonce minus the sexy dancing and costumes. Instead, Fantasia wowed the crowd with Broadway-like singing for “Free Yourself,” “Lose to Win” and “Without Me,” joined by Kelly Rowland. Surprisingly, she even got a little jazzy for “Summertime” and then rocked into the ’80s with Sheila E.’s “The Glamorous Life.”

Bringing 2014 to a close was the very out-of-place Los Amigos Invisibles from Venezuela. They were pure dance music with tangents of rock, disco, EDM and acid jazz. Most of their songs were in Spanish and included David Bowie’s “Let’s Dance.” Rather than take their advice, most audience members headed for the parking lot.

The 2022 Newport Jazz Festival’s three days of sunshine were bracketed, more or less, by a pair of all-star ensemble jams that included Christian McBride. … END_OF_DOCUMENT_TOKEN_TO_BE_REPLACED

In its first full edition since the onset of the pandemic, and with a new director of programming, the Festival International de Jazz de Montréal … END_OF_DOCUMENT_TOKEN_TO_BE_REPLACED

Among the many physical, spiritual, and institutional losses related to the still-ongoing pandemic is that of Los Angeles’ renowned Playboy Jazz Festival (PJF) at the … END_OF_DOCUMENT_TOKEN_TO_BE_REPLACED

It’s difficult to imagine what the stage and the audience would have looked like at Gaillard Center in Charleston, South Carolina, if Rhiannon Giddens’ new … END_OF_DOCUMENT_TOKEN_TO_BE_REPLACED