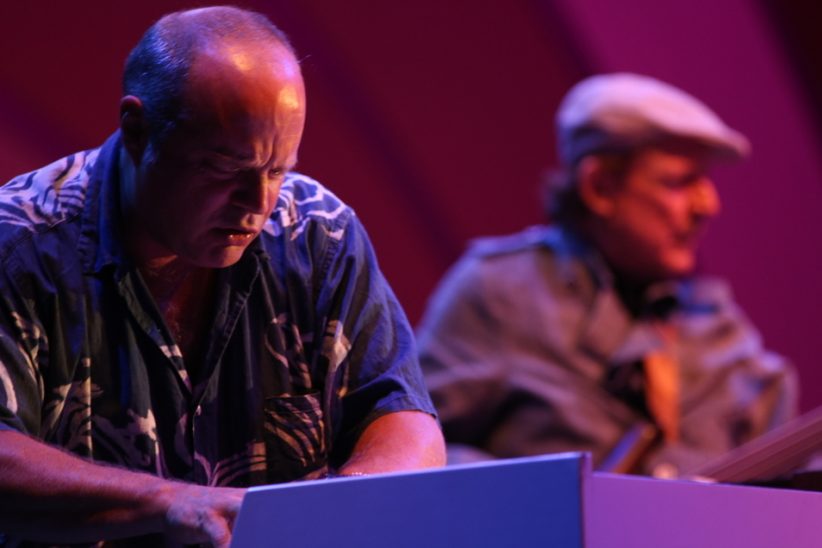 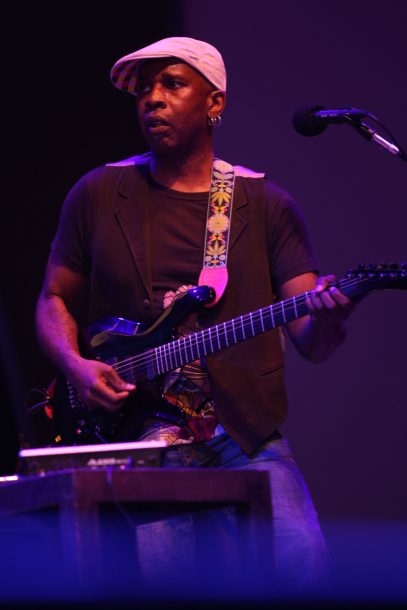 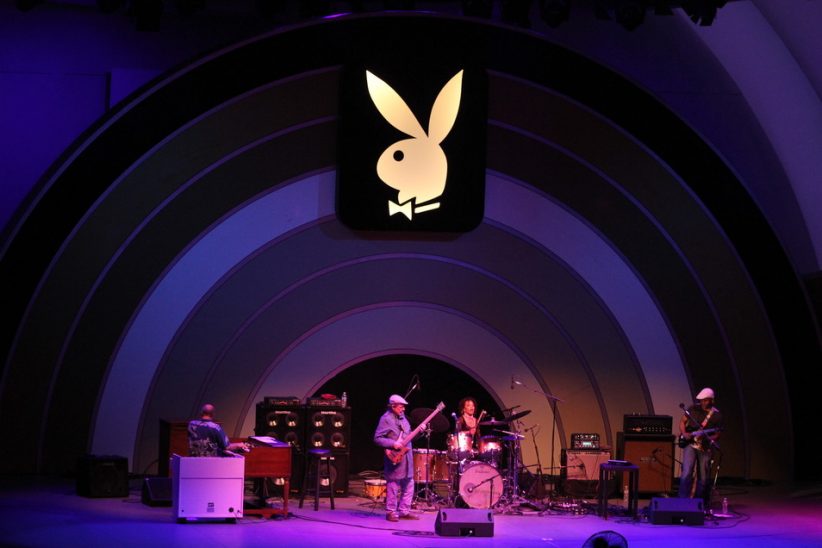 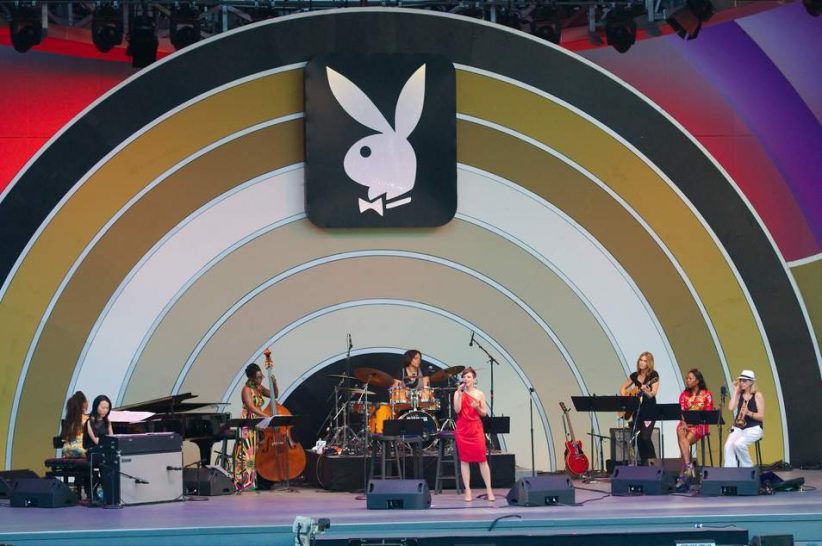 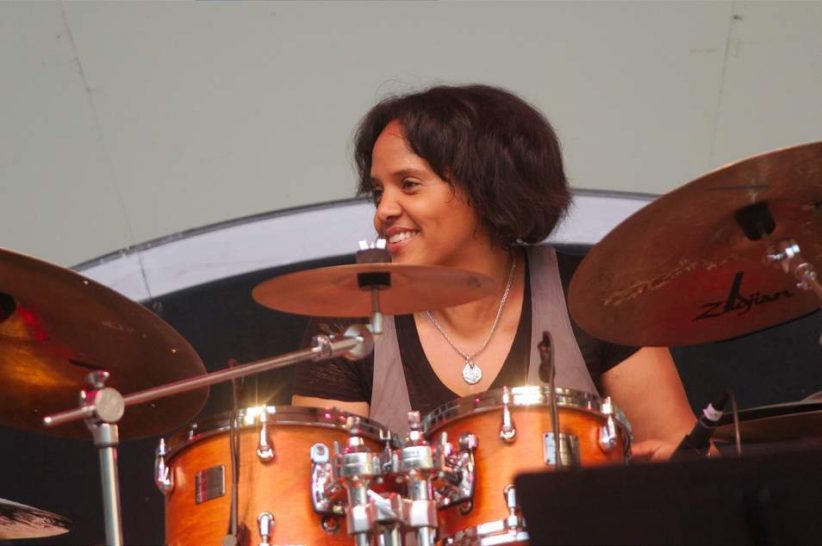 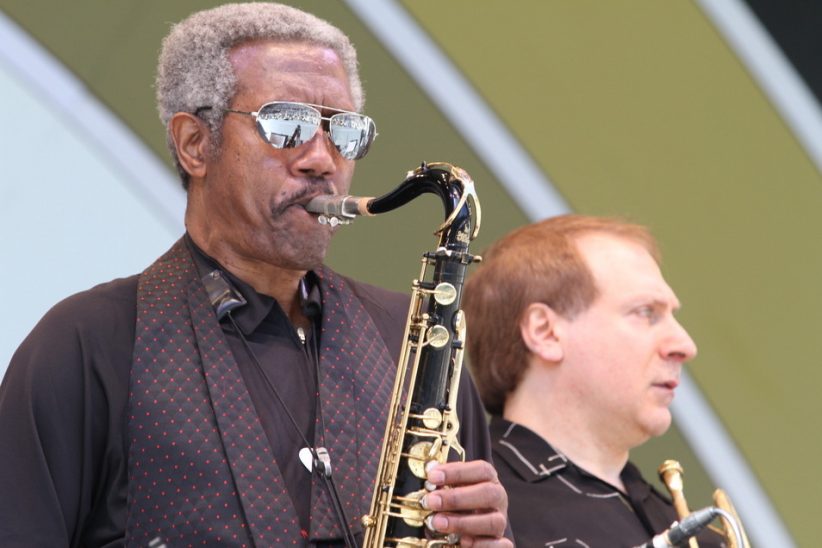 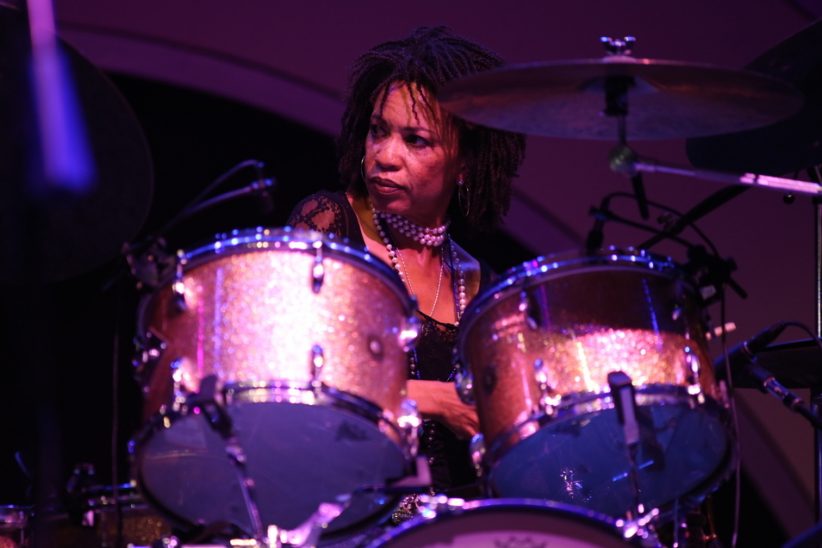 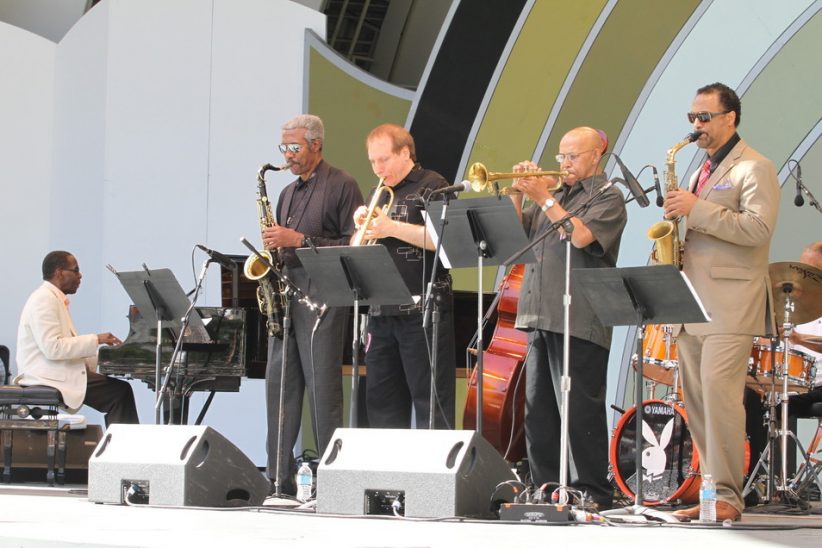 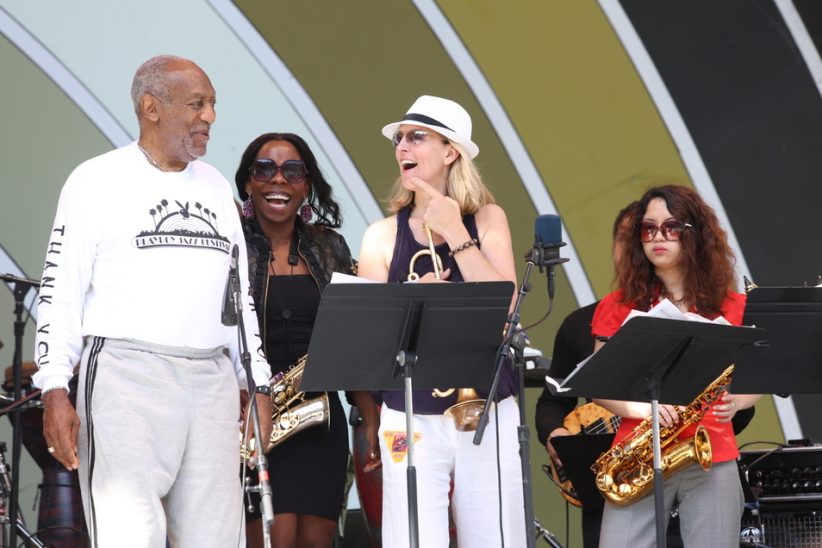 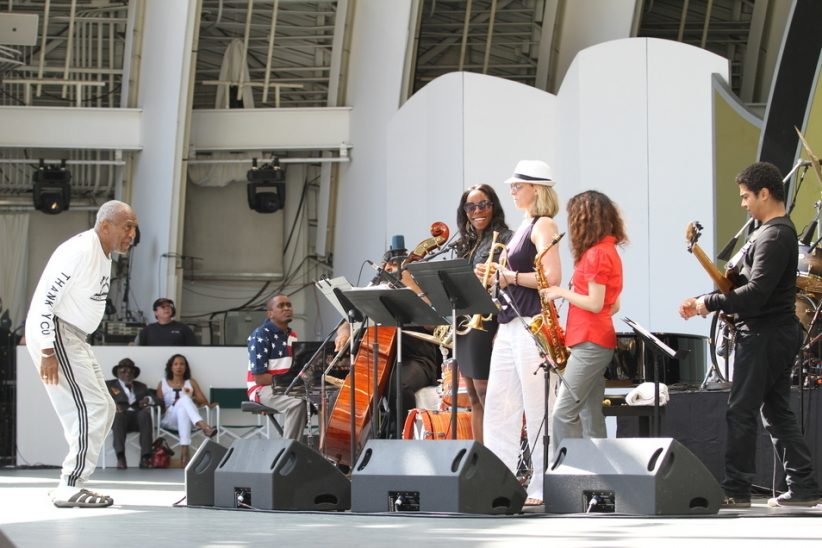 Bill Cosby and The Cos of Good Music, Playboy Jazz Festival 2012 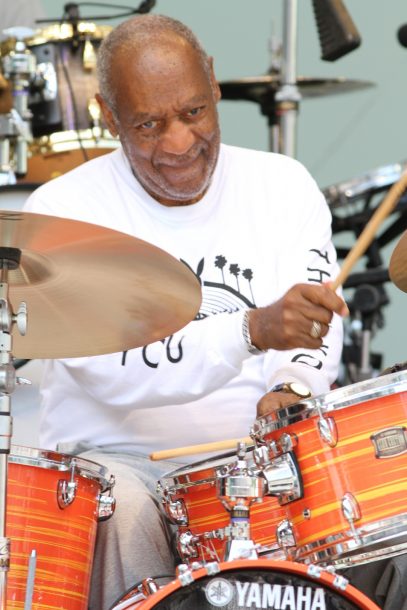 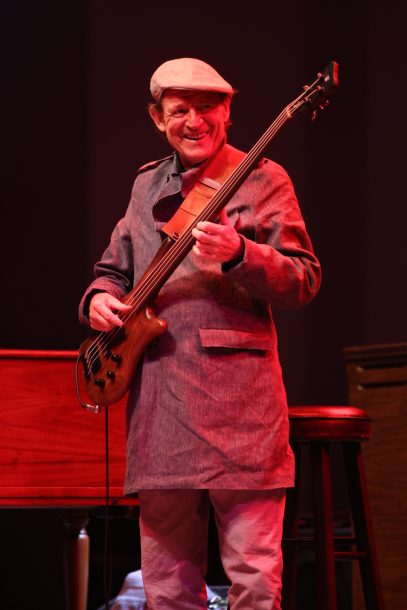 The 2012 Playboy Jazz Festival attempted to be all things jazz-related and then some, to fill the historic 20,000-person Hollywood Bowl amphitheater. Despite the audience’s near-legendary penchant for mingling, nibbling, guzzling and doing very little listening, they actually responded appreciatively to mainstream, unadulterated groupings. Many aspects of PJF (number 34) were rote, with few surprises to keep the audience and longtime master of ceremonies Bill Cosby awake. It was his final stretch at the helm, after 31 years, and he says this year it’s definite.

Although titled the Ramsey Lewis Electric Band, the keyboardist’s group had very little firepower. Lewis pleasantly grooved, playing “Sun Goddess,” his 1975 jazz/soul fusion hit recorded with Earth, Wind & Fire, and the gospel standard “Wade in the Water.” The R&B classic “Betcha by Golly Wow” inspired the audience to sing along and his enduring 1965 hit “The In Crowd” got many to sway along.

On the coattails of his recent Large Jazz Ensemble Performance Grammy for The Good Feeling, bassist Christian McBride showed his evolution as a bandleader and arranger with the selections “Brother Mister” and “In a Hurry.” Additionally, the setting provided McBride with a rare opportunity to perform with his wife, vocalist Melissa Walker (also on the CD). She shined singing a rousing “Big City is for Me” and the ballad “When I Fall in Love.” For comic relief Cosby joined the mini-orchestra to scat during the “Cosby Theme.”

The much-heralded Cookers, venerable veterans and all bandleaders in their own right, made a strong PJF impression that commanded the crowd’s attention. Included in the five-year-old ensemble were trumpeter Eddie Henderson; tenor saxophonists Billy Harper and Craig Handy; pianist George Cables; bassist Cecil McBee; trumpeter David Weiss; and drummer Billy Hart. Besides exhibiting remarkable artistry, the players showcased mostly originals, beginning with a fast-paced “Captain Black,” which featured solos by Weiss, Handy and Cables. In contrast, McBee’s “Peace Maker” was a gently themed piece, accentuated by muted and unmuted trumpet solos. Rounding out an exceptional set was an untitled tribute to trumpeter Lee Morgan that was propelled by swinging brass and stirring solos from all the players.

Pure delight and amusement engulfed the Hollywood Bowl during the Preservation Hall Jazz Band’s performance. Like a favorite old pair of jeans, the audience was very comfortable with the longstanding band and reveled to traditional New Orleans jazz songs by shaking white napkins and dancing unabashedly in the aisles. “Sweet Substitute,” “Ol Mo’ Kicked the Bucket” and the immortal “When the Saints Go Marching In” were tastefully adorned with spirited solos and rousing singing to kick the party into high gear. As if the band was showing penitence, they closed with the emotional gospel standard “I Was Lost, But Now I’m Found.”

The iconic Civil Rights activist and university professor, Angela Davis reprised her spoken word parts from the CD, with Reeves singing to a scintillatingly backdrop for “Echo.” For many boomers it was a monumental moment, while younger generation attendees had to do Google searches to understand the significance of the situation. Toward the end of the session, Bridgewater fronted the group for a funky “Soul Talk.” In closing, Cosby proclaimed the set “a performance of character.”

Only fusion diehards stayed to relish the rekindling of the Tony Williams Lifetime’s fusion as performed by Spectrum Road: guitarist Vernon Reid, bassist Jack Bruce, keyboardist John Medeski and drummer Cindy Blackman Santana. “Coming Back Home” was thematic and melodic, while “Right On” was bombastic and unrelenting, highlighted by Blackman, Medeski, and Reid wailing away. Bruce, who actually sang and played on some of Williams’ groundbreaking records, was steady and gleamed the whole time. He took special delight singing the very timely “Politician,” which he originally recorded with the rock power trio Cream in 1968. Not exactly what one expects to hear at a jazz festival, but at PBJ the implausible often becomes reality.

The 2022 Newport Jazz Festival’s three days of sunshine were bracketed, more or less, by a pair of all-star ensemble jams that included Christian McBride. … END_OF_DOCUMENT_TOKEN_TO_BE_REPLACED

In its first full edition since the onset of the pandemic, and with a new director of programming, the Festival International de Jazz de Montréal … END_OF_DOCUMENT_TOKEN_TO_BE_REPLACED

Among the many physical, spiritual, and institutional losses related to the still-ongoing pandemic is that of Los Angeles’ renowned Playboy Jazz Festival (PJF) at the … END_OF_DOCUMENT_TOKEN_TO_BE_REPLACED

It’s difficult to imagine what the stage and the audience would have looked like at Gaillard Center in Charleston, South Carolina, if Rhiannon Giddens’ new … END_OF_DOCUMENT_TOKEN_TO_BE_REPLACED