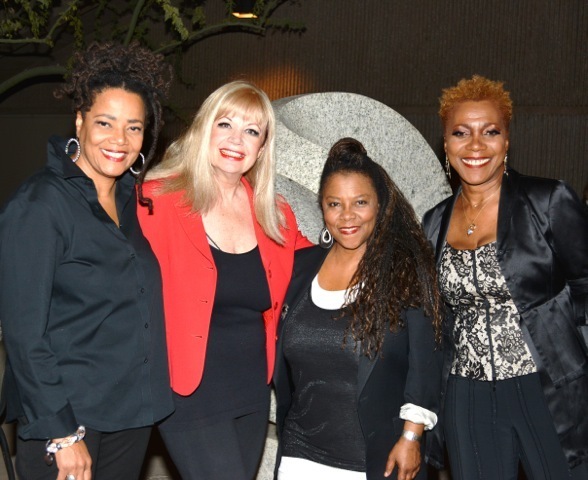 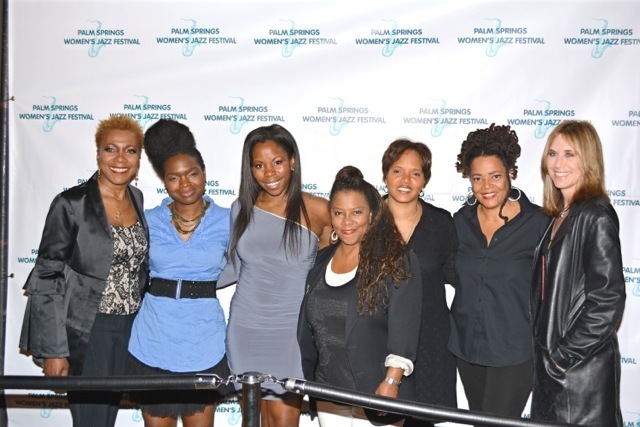 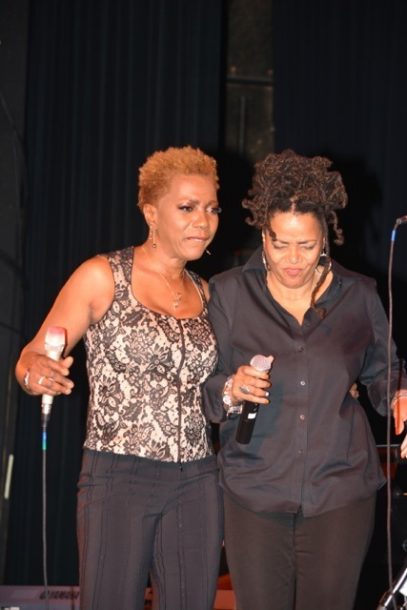 Taking cues from the groundbreaking 18-year-old Mary Lou Williams Jazz Festival in Washington, D.C., and new events, such as the Women’s Jazz Festival in New York and the Berkeley’s Women in Jazz Festival, the Palm Springs Women’s Jazz Festival recently made its debut. Lucy and Gail, longtime event promoters in the region, along with Artistic Director, emcee, vocalist/washboard-spoon player Sweet Baby J’ai (last name unknown), co-opted their three-day gathering with the Dinah Shore Weekend, which calls itself “the largest girl party in the world.” Needless to say, very few hairy knuckles could be found and enthusiastic attendees reveled in solidarity as kindred musicians showcased their considerable talents in a variety of groupings and settings.

The centerpiece of the festival was a show entitled “Women in Music…And All That Jazz,” featuring drummer Terri Lyne Carrington, keyboardist Patrice Rushen, saxophonist Tia Fuller and vocalist Carmen Lundy, along with bassist Mimi Jones and guitarist Linda Taylor. They performed at the Anneberg Theater, located in the Palm Springs Art Museum. Two of Rushen’s compositions, the postbop-oriented “Shortie’s Portion” and the dramatically nuanced, solo-packed “L’ Esprit de Joie (The Spirit of Joy),” started the set.

Carrington spotlighted several of her own compositions, including a tribute ballad to the late pop/R&B singer/songwriter Teena Marie, “Magic and Music.” Lundy sang the tune evocatively. Even more provocative was Ellington’s “REM Blues/Music,” which appears on Carrington’s latest CD, Money Jungle: Provocative in Blue. Fuller read the composer’s accompanying poem, which, to an atmospheric backdrop, extolled the relationship of music and women. Afterward, Lundy expressively sang Al Green’s “Simply Beautiful,” from Carrington’s Grammy-winning 2011 album The Mosaic Project, which featured most of these musicians.

Stevie Wonder’s “Golden Lady” began with Jones’ solo and was richly adorned by Fuller’s superb phrases. J’ai joined the women for entertaining hip-hop/jazz vamping as Taylor injected tangy funk riffs before shifting into “Summertime” and scatting. Lundy soulfully sang her own “Show Me a Sign” and the Beatles’ “Michelle,” highlighted by an a cappella intro. For the encore Lundy and J’ai joined forces on the gospel classic “Walk With Me,” set to a funky backdrop.

Opening the show was multi-talented Suede, a mixture of Adele, Diana Krall and Bette Midler. She was impressively commanding and superbly supported by Karen Hammack on piano, Suzanne Marinette on drums, Anna Stadlman, bass, and Carol Chaikin playing reeds. Standouts included “I’m Keeping My Eye on You,” “Teach Me Tonight” and the original ballad, “Emily Remembers.” The song was especially touching, embellished by Suede’s acoustic guitar playing and beautiful singing.

“Jazz in White,” one of the shows book-ending the prime-time concert at the Spa Hotel Ballroom, required everyone to wear white, with dinner and an after-party included. Musically, the event focused on “West Coast Cool,” showcasing J’ai and her Dinah All-star Band, comprised of Hammack, Chaikin, Morrisette, Robin Bramlet on bass, LA on percussion and Lesa Terry on violin. The vocalist’s “Frida’s Song” was soulful and featured spoken word, with sax and violin soloing mightily. Chaikin’s arrangement of “God Bless the Child,” heightened by her playing in the audience, nearly stole the show, along with her upbeat hard bop original “Looking Through.” Hammack’s version of “Maiden Voyage” made an impact as well. J’ai came back strong with her signature blues number, “Meet Me With Your Black Drawers on.”

Earlier the same day the festival started with a screening of Judy Chaikin’s (not related to the saxophonist) documentary, The Girls in the Band, which chronicles the struggles of women in jazz from the beginning to the present. The sole outdoor event of the festival, “Jazz With a Splash/The Dinah Jam,” officially inaugurated the festival.

Singer/percussionist Estaire Godinez and band-composed of Bramlett, Benita Lewis on drums and Sunnie Paxson, keyboards, kept things breezy. Godinez delighted the shade-seeking crowd with “The Girl From Ipanema,” the romantic Portuguese-sung original “Islands,” and the soulful “Save Your Love for Me.” A jam was highlighted by singer Carolyn Martinez leading “I’m in the Mood for Love,” J’ai and Godinez teaming up for “Everybody’s Jamming in Palm Springs” and Suede belting out “Built for Comfort.”

Getting the second day of festival underway was an afternoon event, “Jazz + Blues=Soul” at the 360 North Club. Yve Evans, playing piano and singing, backed by Morrisette and Stadlman, exhibited the influence of Nina Simone, Shirley Horn and Billie Holiday. Her versions of “I’m a Woman” and “Peel Me a Grape” were full of attitude. “Just Friends,” “Blackbird” and “A Little Help From You” revealed a more sentimental and sensitive side of the diva. For an encore she sang “Skylark” with no support.

In strong contrast, Sherry Pruitt and the Queens of the Blues rocked the club with the classic “Wang Dang Doodle,” the funky “The Blues is Alright” and the ballad “Bluebird.” Guitarist Suzanne Thomas played and sang “The Thrill is Gone” soulfully; bassist Elizabeth Hangan served up a Latin-tinged “Love Me Like an Angel”; drummer, Andrea Byrd surprised the crowd with Gladys Knight’s “You’re the Best Thing That’s Ever Happened to Me” and keyboardist Matilda Haywood delivered a potent take on Ruth Brown’s “If I Can’t Sell It, I’m Gonna Sit on It.”

Concluding the three-day extravaganza was a Sunday brunch program at the Spa Hotel Ballroom, “The Divas.” Enlisted for the segment were Lori Jenaire, Rose Mallett, Godinez and Gina Saputo. They presented astonishing vocal tributes to Sarah Vaughan, Phyllis Hyman, Celia Cruz and Peggy Lee. Providing support for the singers were Hammack, Chaikin, Lewis and Bramlett. Channeling Vaughan was Mallett, who impressively aroused the attendees with a powerfully sung version of “Tenderly” and rollicking blues vamping through “Stormy Monday.” Saputo emulated Lee’s smoldering sexuality with a rocking “Fever” and the lush ballad “The Man I Love.”

J’ai honored Holiday with a piano-only “You Don’t Know What Love is” and initiated a champagne toast to all great female divas, musicians and promoters. Godinez honored Cruz with the sensual mambo “Black Tears” and “Bésame Mucho.” Last out was Jenaire, who drew emotional reactions with her versions of the Stylistics’ hit “Betcha By Golly, Wow” and her take on “I Can’t Stand This Living Alone.”

Before the brunch concert, Bessie, Billie & Ruth, a short film featuring J’ai, whose uncle, Vernon Gower, was a bassist with Holiday, was shown. Overall, the festival surpassed expectations, exhibiting the essential elements to become a lasting tradition.

The 2022 Newport Jazz Festival’s three days of sunshine were bracketed, more or less, by a pair of all-star ensemble jams that included Christian McBride. … END_OF_DOCUMENT_TOKEN_TO_BE_REPLACED

In its first full edition since the onset of the pandemic, and with a new director of programming, the Festival International de Jazz de Montréal … END_OF_DOCUMENT_TOKEN_TO_BE_REPLACED

Among the many physical, spiritual, and institutional losses related to the still-ongoing pandemic is that of Los Angeles’ renowned Playboy Jazz Festival (PJF) at the … END_OF_DOCUMENT_TOKEN_TO_BE_REPLACED

It’s difficult to imagine what the stage and the audience would have looked like at Gaillard Center in Charleston, South Carolina, if Rhiannon Giddens’ new … END_OF_DOCUMENT_TOKEN_TO_BE_REPLACED