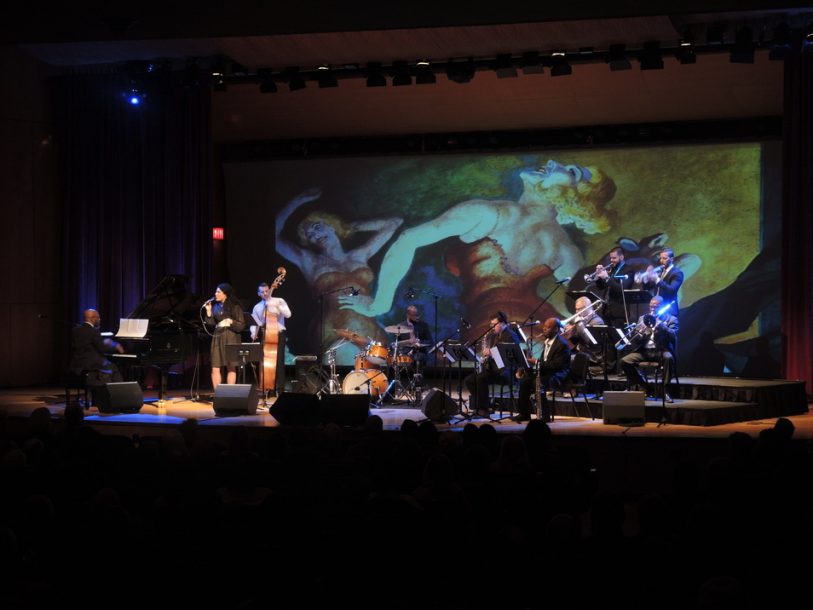 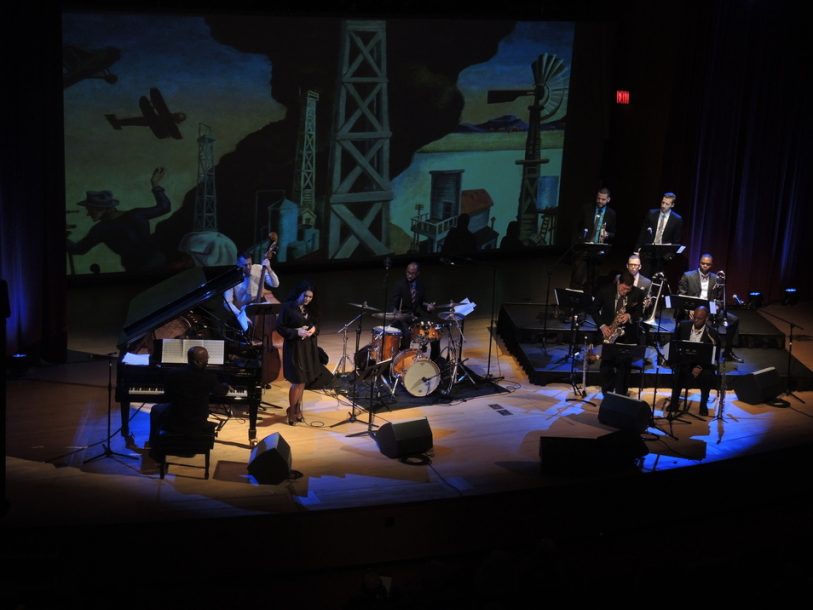 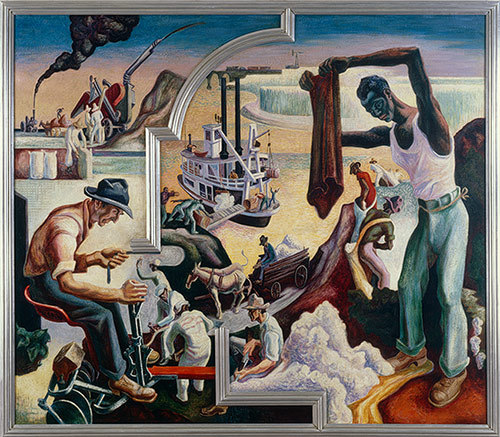 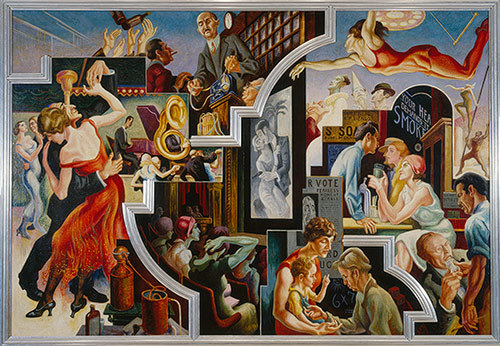 While soaking in the rich imagery and vibrant colors of Thomas Hart Benton’s 10-panel mural, America Today, in New York’s Metropolitan Museum of Art, you can’t help thinking about how important context is. For years, the mural, commissioned by the New School further downtown on West 12th Street in 1930, languished in its original space, students crashing their chairs up against it until the work began falling into disrepair. If those students or school personnel noticed the piece at all, they missed its grandeur and largely took it for granted. When it was finally rescued, removed from the school to be restored and displayed, few likely even noticed it was gone.

Today, commanding its own room at the Met until April 19, America Today is overpowering, an imposing, panoramic, floor-to-ceiling depiction of teeming, sweaty life in New York City and other American locales several decades ago. Museumgoers seek it out deliberately, stare at it at length and analyze it by section and as a whole; we recognize that it’s important. We can’t imagine that not long ago it was just a fading wall in a school.

When pianist/conductor Orrin Evans and the Captain Black Big Band performed their “musical tribute” to Benton’s mural in the Met’s Grace Rainey Rogers Auditorium on the evening of Feb. 20, context again became important. With photos of the panels from the mural scrolling horizontally, slowly, as a backdrop to the band, the well-mannered, smartly attired audience-many undoubtedly residents of the tony surrounding neighborhood-absorbed the music politely but enthusiastically in their seats. One wondered how many would have ventured out to hear the same program if Evans and company had been presenting it at a downtown club or even across town at their old West Side hangout, the tiny Smoke Jazz & Supper Club, rather than a legendary Upper East Side cultural landmark. The program was described in promo materials as an “evening of dance music,” but no one was dancing.

All of which seemed fine with Evans and the band. The auditorium is a wonderful place to listen intently to live music, and this mini-big band (now 10 pieces, down from its original 17) deserved that close listen, much as Benton’s art begs to be taken seriously. Leading eight other musicians and a vocalist, Evans at one point early in the show offered his take on Benton’s work and connected it to the music: What’s missing now in music, he said, is fun, and his band was there to bring that back.

And it was fun. These are some musicians with major chops, mind you, but they didn’t skimp on the entertainment factor. Coming out swinging on Peter Nero’s theme from the 1963 comedy Sunday in New York, Evans and the band, fronted-as they were off and on for the night-by the vocalist Joanna Pascale, brought a bluesy touch to the tune. Pascale wasn’t much of an improviser this night but the music didn’t call for that; she’s got superb control and timing and provided enough of a lilt to inspire Evans to bounce on his stool. The band-trumpeters Josh Lawrence and John Raymond, trombonists David Gibson and Stafford Hunter, tenor saxophonist Marcus Strickland, alto saxist Todd Bashore and the rhythm section of bassist Alex Claffy and drummer Anwar Marshall-locked in firmly, and stayed that way as the uptempo opener gave way to a typically melancholy reading of Hoagy Carmichael’s standard “Stardust.” Evans and Pascale introduced it alone, Evans’ fills alternately austere and manic, creating a dramatic tension that carried over once the band joined in.

The showpiece of the performance, however, was undeniably Lawrence’s five-section “Harlem Suite.” Maneuvering their way through several shifts of tempo and coloration, the music both evoked the flavor and bustle of its titular location and left it at will. This is where the fun came in: Evans’ hands left his piano keys so he could clap or snap rhythmically as the saxophonists soloed, and if his own solo was somewhat more tied at certain moments to contemporary sensibilities than anything that might’ve come out of the Cotton Club 80 years ago, that was no problem because it was a snug fit. Wherever else he went, be it from angular, choppy chords and Monkish dissonance to ragtimey simplicity, Evans never left the blues far behind.

As masterful as his own pianism was, Evans was well aware that it was up to the Captain Black Big Band’s horn and rhythm sections to provide most of the sparks, and that they did. Each soloist was masterful, maintaining the cosmopolitan feel built into the suite without turning it toward the retro. Bashore and Strickland engaged in a classic jump-era chase, and Stafford’s turn got the leader so excited that at one point he blurted out, “Do that thing you did before!” to keep the momentum going. By the time the “Harlem Suite” wound down, it had practically turned into a New Orleans second line, but that was OK too-if there’s a single lesson to be learned from Thomas Hart Benton’s America Today it’s that as different as we may be within our country’s diverse regions, we’re all connected. That much hasn’t changed since the 1930s.

The 2022 Newport Jazz Festival’s three days of sunshine were bracketed, more or less, by a pair of all-star ensemble jams that included Christian McBride. … END_OF_DOCUMENT_TOKEN_TO_BE_REPLACED

In its first full edition since the onset of the pandemic, and with a new director of programming, the Festival International de Jazz de Montréal … END_OF_DOCUMENT_TOKEN_TO_BE_REPLACED

Among the many physical, spiritual, and institutional losses related to the still-ongoing pandemic is that of Los Angeles’ renowned Playboy Jazz Festival (PJF) at the … END_OF_DOCUMENT_TOKEN_TO_BE_REPLACED

It’s difficult to imagine what the stage and the audience would have looked like at Gaillard Center in Charleston, South Carolina, if Rhiannon Giddens’ new … END_OF_DOCUMENT_TOKEN_TO_BE_REPLACED