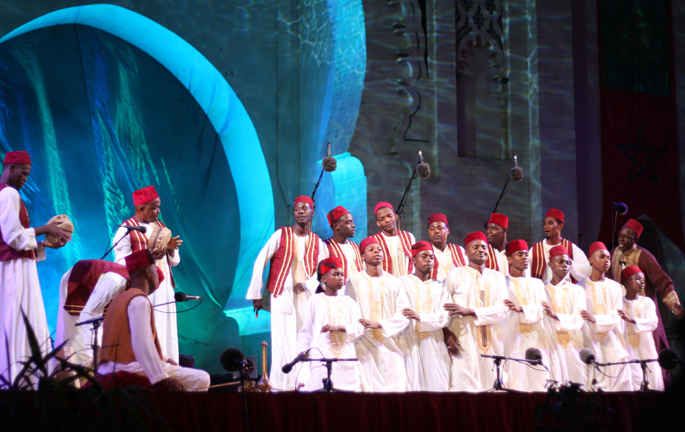 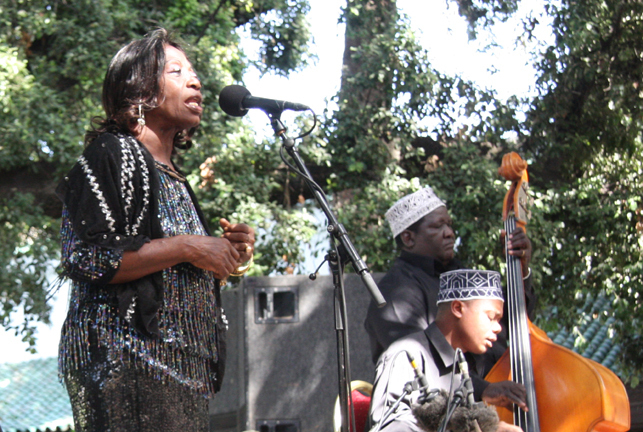 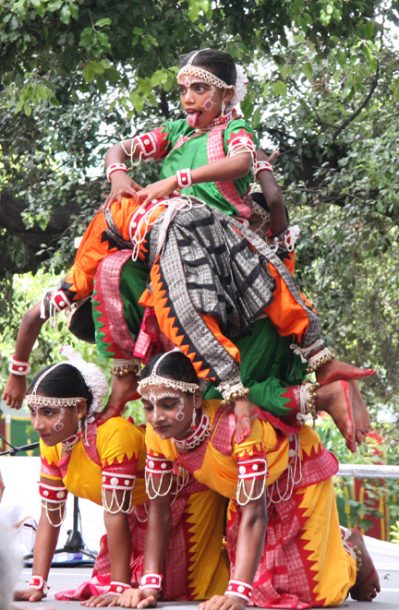 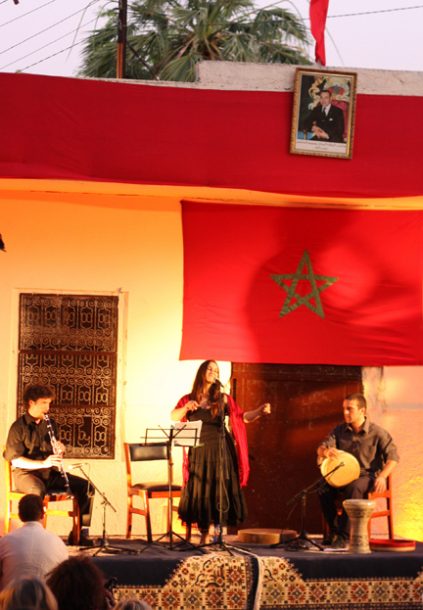 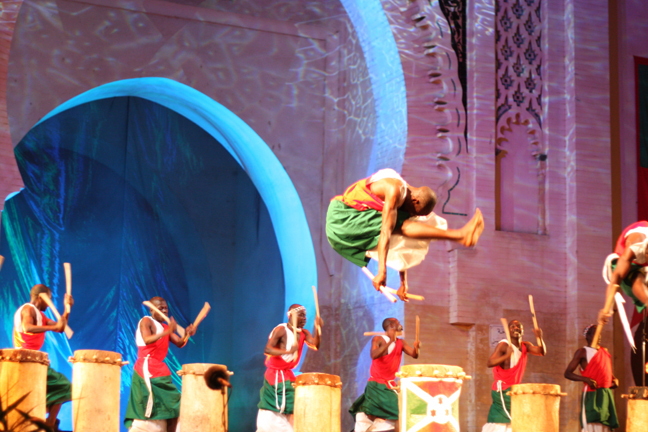 At the Musée Batha in Fes, Morocco recently, deep into a moving – and grooving – set by Tanzanian vocalist Shakila Saidi and the Rajab Suleiman Qanun Trio, an ambient interruption wedged its way into the show. No, this was not a typical sonic intrusion encountered in outdoor concerts, i.e. a passing airplane, but the striking and familiar sound of the Islamic “call to prayer,” heard booming all over the city of Fes several times each day. For a few minutes, the musicians stopped and the audience quietly basked in the sound of the call to prayer before the show went on. Clearly, we were not in Kansas, or the Western world, anymore, a thoroughly liberating sensation.

Other cities in Morocco, including Casablanca, Marrakesh and Tangier, may exert a stronger magnetic pull on the tourist trade, but it is said that you haven’t really been to Morocco until you visit Fes, and especially its ancient maze-like medieval city Fes al Bali. Dating back a Millennium and change, Fes al Bali, with its narrow streets suitable only for human and donkey traffic, is the biggest and best-preserved medieval city in the Arab world, and a trip in itself. Fes, as a whole, is, in a phrase, the heart and soul of Morocco, with special emphasis on the “soul” aspect. That has made it a ripe setting for one of the world’s most unique and uniquely important festivals, the Fes Festival of World Sacred Music.

In this June’s 16th annual edition in 2010, the Fes Festival once again affirmed its vision, presenting fascinating music, but with a larger purpose. “Sacred music” is a necessarily broad category and description, which makes the Fes Festival’s programming definitely elastic and enticing. The music heard here touches on a wide swath of identifiable religious and spiritual connections, including generous helpings of music with direct ties to modes of worship, in Sufi, Islamic, Jewish, Christian/Catholic, Hindu and Buddhist modes. But the argument can be made that most music in the world has some intrinsic link to sacred values, even when made for purely “profane” settings.

From the American spiritual context, for instance, the gospel icons Blind Boys of Alabama made for an easily relevant featured event on the closing night’s concert, on a bill with Sista Kee. But a decidedly “spiritual” component is also to be found in the improvisational, exploratory abandon of tenor saxists David Murray and Archie Shepp, who performed with the Caribbean Gwo Ka Masters.

In other American news, Ben Harper was slated to perform, but canceled, reportedly due to a skateboarding accident. As a late-breaking and fittingly Saturday night-geared substitute, a program dubbed the “Bamako Connection” was hastily arranged. The show featured Malian artists Djelimaday Tounkara-a fine and loose-limbed guitarist who makes explicit the symbiotic link between West African music and virtually the whole of American blues, jazz and pop–and Amadou and Miriam. Led by the infectious and emotionally generous blind couple, Amadou and Miriam’s band is a full-service band, delivering a rhythmically potent and seductive set (although the presence of sampled kora struck a sour note: why not the real thing?).

Elements of dance made their way into the festival, as well, beginning at the beginning. On the gala opening night in the vast fortress-like site of the main evening shows, Bab Al Makina, the beloved and lovely princess of Morocco (who hails from Fes) made an appearance and gave the royal blessing, before a ceremonial and meditatively stately music and dance evening by the Royal Ballet of Cambodia, a program called ‘The Legend of the Creation of the Khmer Kingdom.” The next afternoon, from a more acrobatic but also worshipful perspective, came the amazingly nimble young male dancers, the Gotipuas of Raghurajpur Heritage Village. Set to South Indian music, the acrobats bedazzled the audience at Musee Batha with its disciplined moves and gymnastic pyramid building.

In a memorable festival performance from another corner of the Indian world, the integration of music-making and the mobile body and spirit reached a pinnacle in the person of Parvathy Baul, part of the ecstatic Baul tradition from Bengal, considered “the last great mystic nomads in the world.” Parvathy sang powerfully and poetically, while dancing, plucking the droning string instrument, the Ektar, and tapping the small drum, the Dugger, and jangling ankle bells, and duly captivated the senses. At 5 p.m., like clockwork, the call to prayer entered the sonic landscape once again, on time and spiritually in tune.

One of the new features of this year’s festival-worth repeating and celebrating–was the enticing “Night in the Medina,” on Monday night, a mosaic-like program of eight shows in venues large and small all around the Medina. Comfortable walking shoes and an appetite for musical globe-trotting are required. We started out at Synagogue Ben Danan, in the Jewish quarter of Fes-el-jadid (with more security than usual, not surprisingly). There, nestled in a nook between ramshackle buildings and happy children, the hypnotic singer Turkish Gülay Haçer Toruk intoned sacred and secular songs from Anatolia, along with clarinet and hand drums.

After meandering through a less tourist-trodden section of and getting a bit lost (mostly blissfully), we wended our way down and down narrow, twining streets to the Riyad Mokri, a beautiful, ornately-tiled house with a strong cloister-like atmosphere. Though not specifically a sacred place, the Riyad’s interior suggested an inner sanctum, far from the outside world, a feeling enhanced by the ethereal, quasi-ascetic performance by intriguingly offbeat French singer Camille, tandem with vocalist/vibraphonist Clément Ducol. The high point of their willfully diverse, abidingly ambient-minded set, was an ode to Bach, a sinuous and contrapuntal two-part invention dubbed the “Le Canon Perpétuel.”

Late that night, we made our way past the Dar Tazi-the site of regular late night Sufi

music shows, where the fascinating and mesmeric Sufi Group Mtendeni Maulid of Zanzibar produced its swaying (sonically and physically) enchantment. The group had played on a double bill, with the similarly but differently entrancing Master Drummers of Burundi, in the expansive splendor of the Bab Al Makina the night before.

Ending the long, ambulatory and satisfying “Night in the Medina,” in a suitably multi-cultural confab of musicians and singers from Iran, France and Canada, the Musée Batha hosted a meeting of the Constantinople Ensemble and the stunning male vocal quartet Barbara Furtuna.

In a main attraction of the 2010 festival, the conceptually-fueled and ever-ambitious early music specialist Jordi Savall presented one of his more expansive projects yet, Jerusalem, the City of Two Peaces: Heavenly Peace and Peace on Earth. Nothing short of a brief history of Jerusalem over two-plus Millennia, mostly in music of varying cultural colors, but also selected texts and historical asides, Savall’s latest opus engages musicians from Europe, Asia, the Middle East and North Africa, along with his longstanding core group, Hesperion XXI. Savall’s project was premiered in New York City before arriving in Fes, but it felt tailor-made for this festival, with its panorama of cultural perspectives and musical styles. Although the piece goes on too long, and perhaps extends too wide a reach, its ecumenical spirit and boundary-blurring ambitions gave it a character neatly in sync with the very central agenda of the Fes festival, from its beginnings forward.

For nine days, Fes had the feel of a peaceable power spot in the world, hopefully drawing on the proverbial universal language of music to ease and dislodge tensions. Ideally situated between Europe, sub-Saharan Africa, the Middle East and beyond, and America, Fes becomes a host for a deliberately multi-cultural and multi-creed conjoining of musics and belief systems. In Fes for a period in June, the world came together, if only in song, dance, and trance.

“It’s time to imagine a place where we can come together,” Danilo Pérez said from the hallowed stage of Washington, D.C.’s historic Sixth & I … END_OF_DOCUMENT_TOKEN_TO_BE_REPLACED

At the Zeiders American Dream Theater in Virginia Beach, Va., between April 8 and 10, the Vocal Jazz Summit convened in person for the first … END_OF_DOCUMENT_TOKEN_TO_BE_REPLACED

The Big Ears Festival returned to Knoxville in a big way in late March, drawing an estimated 30,000 music enthusiasts from across the U.S. and … END_OF_DOCUMENT_TOKEN_TO_BE_REPLACED

Let’s get this out of the way: The Savannah Music Festival is not a jazz festival. Held over the course of 17 days in late … END_OF_DOCUMENT_TOKEN_TO_BE_REPLACED