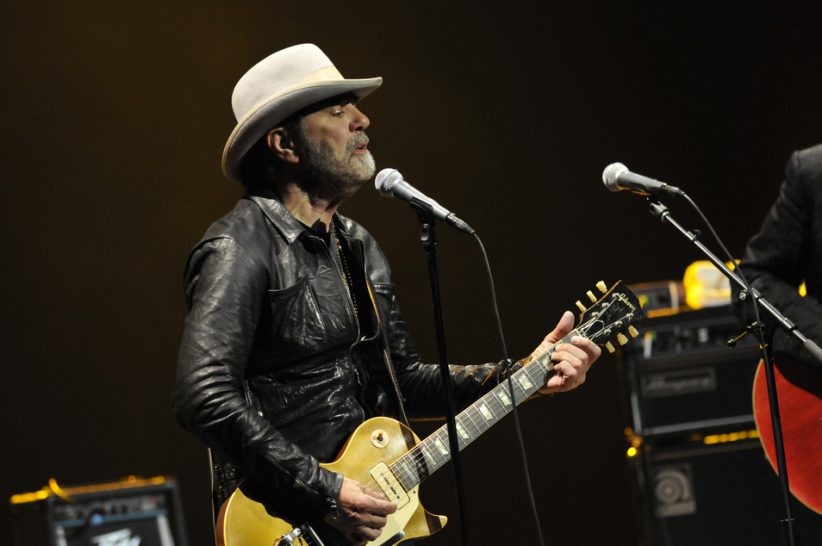 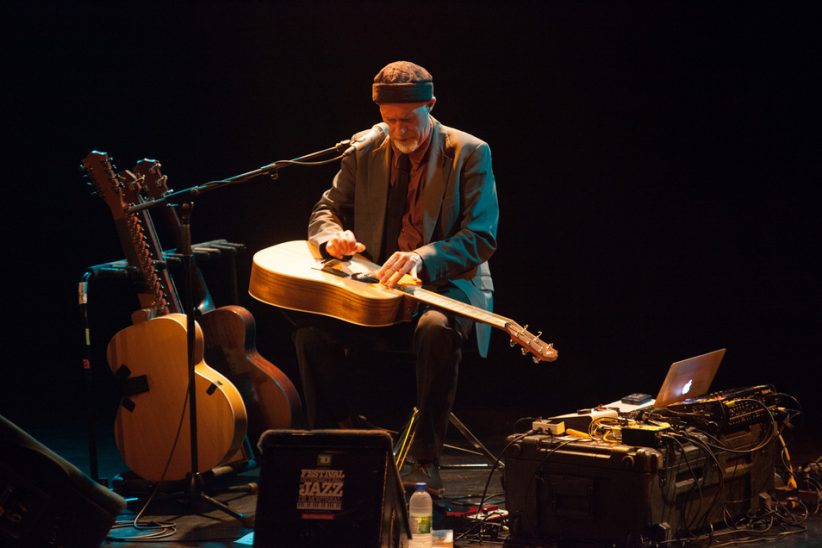 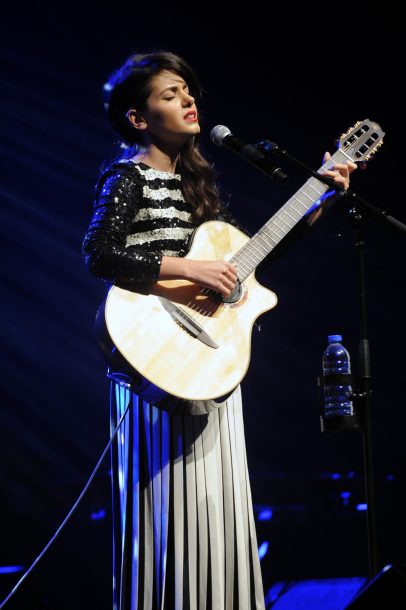 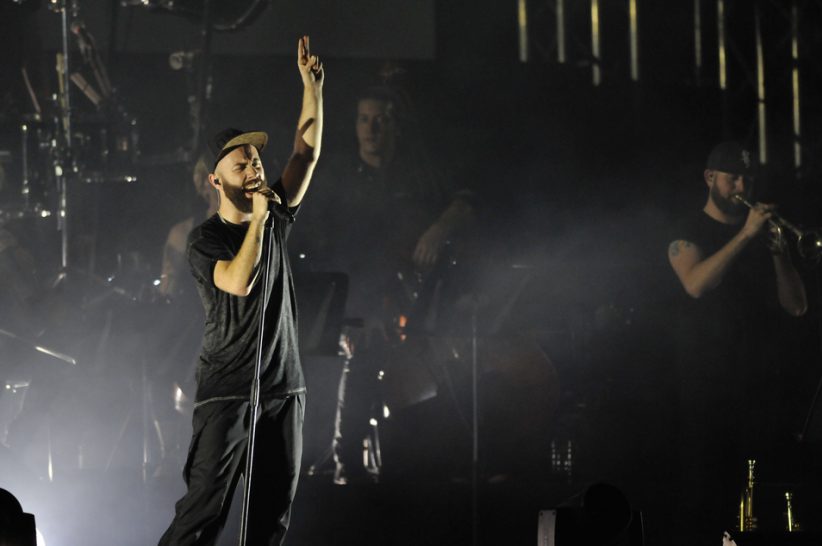 Woodkid at the 2014 Montreal Jazz Festival

Cassandra Wilson paused at the microphone, allowing the last notes of “You Don’t Know What Love Is” to fully fade into the night, and then turned her attention to the crowd. “I’ve missed you,” she said with the same sincerity that lifts her best songs. “It’s great to be back in Montreal.”

That summed up the evening’s prevailing sentiment quite nicely. Both fans and artists seemed thrilled to be in attendance on opening night (June 26) of the 35th annual Montreal International Jazz Festival. Tens of thousands turned out to help get the 11-day party started. They were treated to a smorgasbord of talent, ranging from sensational jazz vocalist Wilson and rock icon Daniel Lanois to rising neo-folk star Woodkid and trumpeter supreme Roy Hargrove.

And it really just represented the tip of the iceberg. There’s so much more to come as the festival continues to celebrate its milestone anniversary through July 6. Upcoming top attractions include Diana Krall, Keith Jarrett, Brad Mehldau, Earth, Wind & Fire, Diana Ross, Maxwell, Pink Martini, Elvis Costello, Aretha Franklin, the Violent Femmes, St. Vincent, Trombone Shorty and B.B. King. In all, the 2014 festival will host some 800 performances and events in downtown Montreal.

One of the early highlights was Harry Manx’s performance with ax-man-extraordinaire Charlie Hunter. It was the kickoff to Manx’s three-part “Guitar Bazaar” series, which finds the multi-instrumentalist collaborating with a different guitar hero on each night.

Manx and Hunter were a very dynamic duo, delivering exotic, yet earthy tunes that drew equally from Hindustani classical music, folk, blues and jazz. Manx led the charge, wowing fans with his work on slide guitar and other instruments as well as with his warm, well-worn vocals, while Hunter backed him up with perfectly placed notes and runs on his seven-string guitar. The set included Manx’s well-known cover of Bruce Springsteen’s “I’m on Fire,” but the real sparks came with the blistering take on the blues standard “Baby, Please Don’t Go.”

Arguably the night’s biggest event, and surely one of its best, was happening over at the gorgeous Montreal Symphony House, where the Montreal Symphony Orchestra and special guests were celebrating the “The Gershwin Legacy.” The program featured pianist-composer Alain Lefevre, who performed both in a jazz trio setting (with bassist Michel Donato and drummer Paul Brochu) and with the entire orchestra. The first part of the program climaxed with a miraculous rendition of George Gershwin’s “Rhapsody in Blue,” which brought the entire crowd to its feet.

It would’ve have been nice to stick around to see the second part of the program, which included Gershwin’s Concerto in F, but it conflicted with Cassandra Wilson’s set. Such is life at the Montreal International Jazz Festival, where the abundance of tantalizing choices leads to some very tough decisions.

Wilson, of course, was marvelous. There’s never any doubt when you’re watching her in concert that you’re seeing one of the all-time greats, a singer who seems destined to be mentioned in the same breath as Billie, Nina, Ella and Sarah for decades to come.

Backed by her six-piece band, Wilson spent much of the evening celebrating the 20th anniversary of her Blue Note debut, Blue Light ’til Dawn, and crooned through such cuts as “You Don’t Know What Love Is,” “Come On in My Kitchen” and “Hellhound on My Trail.” Yet, she also added in a little local flavor and performed from the songbooks of two of Canada’s finest. Her version of Joni Mitchell’s “Black Crow” was quite good, but her encore of Neil Young’s “Harvest Moon” was devastatingly effective, leaving the crowd with nothing else to do but marvel in her glory.

Those were just some of the highlights of day two (June 27) of the 35th annual Montreal International Jazz Festival. In all, it was another blockbuster day of music, offering up such diversely appealing acts as singer-songwriter Rufus Wainwright, powerhouse vocalist Diane Reeves, the legendary Heath Brothers and the Montreal Symphony Orchestra.

One of day two’s major highlights was the performance by Stern and Evans, who co-led a quartet powered by the razzmatazz rhythm section of bassist Tom Kennedy and drummer Steve Smith.

The mighty guitarist and the equally muscular sax man share much history, stretching back to the 1980s when they were sidemen for the great Miles Davis. Although they have long led their own excellent groups, they decided to join forces once again and formed the descriptively titled Mike Stern and Bill Evans Band in May 2013. It could have been a short-lived project, but they had so much fun on their first round of dates that they decided to book more for this year.

The quartet’s roughly two-hour set was spellbinding from start to finish, delivering a festival’s worth of superb solos and musical synergy. Stern was an absolute lion, roaring through each and every lead like his reputation depended on it. He’s one of the most consistently entertaining performers in the jazz game, but he seemed to find a whole other gear on this night.

Stern’s very first solo of the night, which came near the start of a high-octane 20-minute-plus run through the title track to his most recent CD, “All Over the Place,” contained more highlights than most guitarists’ entire careers. Evans performed at a similarly high level, turning in blistering leads on both soprano and tenor horns. Smith and Kennedy also made the most of their individual turns in the spotlight.

Stern wasn’t the night’s only guitar hero. Earlier in the evening, the extraordinarily talented Kevin Breit performed in a duo setting with Manx. It’s was the second concert in Manx’s three-part “Guitar Bazaar” series, which features the multi-instrumentalist collaborating with a different guitarist on each night. It kicked off with Charlie Hunter and winds up with Dave Lindley.

The pairing with Breit was amazing, even more so than the prior night’s show with Hunter. It had everything to do with how well these two pros know each other, from recording and touring together on a regular basis. While Hunter was content to ride shotgun for long stretches, Breit kept grabbing the wheel and hitting the gas. He drove this show with one powerful, poignant lead after another. It’s no wonder that Breit’s talents are so highly valued by many top stars, including Cassandra Wilson, who featured the guitarist in her band on the opening night of the festival.

Katie Melua provided just the right break from all the fretboard fireworks. The jazz-pop vocalist was making her fourth appearance at Montreal Jazz, which is indeed quite an accomplishment for an artist who has yet to turn 30. Her show illustrated exactly why she’s become such a festival favorite. She had the crowd in the palm of her hand from the minute she took the stage and only tightened her grasp as the night progressed. She had a solid plan for her setlist: “I just want to play you songs I adore.”

And the crowd adored them too. Some of her choices were a bit too obvious-sorry, but we just don’t need another rendition of “Bridge Over Troubled Water,” no matter who is singing it. Mostly, however, she dealt all aces. The highlight of her set was the gorgeous version of Leonard Cohen’s “In My Secret Life.” Originally Published June 28, 2014

The 2022 Newport Jazz Festival’s three days of sunshine were bracketed, more or less, by a pair of all-star ensemble jams that included Christian McBride. … END_OF_DOCUMENT_TOKEN_TO_BE_REPLACED

In its first full edition since the onset of the pandemic, and with a new director of programming, the Festival International de Jazz de Montréal … END_OF_DOCUMENT_TOKEN_TO_BE_REPLACED

Among the many physical, spiritual, and institutional losses related to the still-ongoing pandemic is that of Los Angeles’ renowned Playboy Jazz Festival (PJF) at the … END_OF_DOCUMENT_TOKEN_TO_BE_REPLACED

It’s difficult to imagine what the stage and the audience would have looked like at Gaillard Center in Charleston, South Carolina, if Rhiannon Giddens’ new … END_OF_DOCUMENT_TOKEN_TO_BE_REPLACED