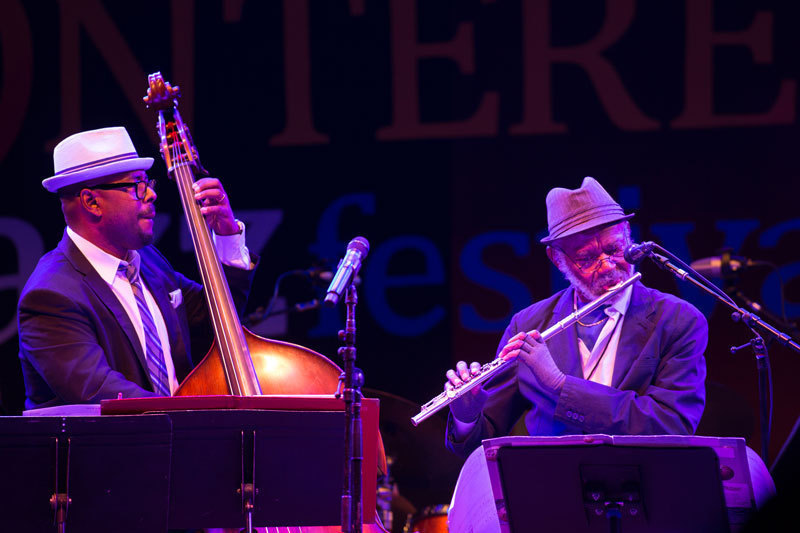 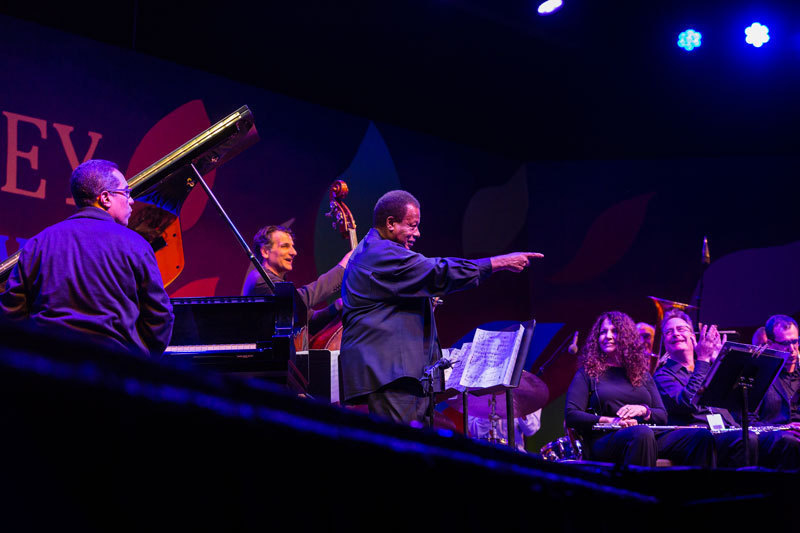 With his quartet and a 10-piece wind ensemble conducted by Nicole Paiement, Wayne Shorter premieres “The Unfolding” at the 2016 Monterey Jazz Festival

When you’re watching a set and thinking, “I’ve never heard Brian Blade play better,” well, the jazz stars have aligned and all portents look promising for a great weekend of music. In this case, the aligning stars consisted of saxophonist Joshua Redman, cornetist Ron Miles and bassist Scott Colley, in the West Coast debut of the new collective quartet Still Dreaming. Inspired by the great Ornette-adjacent quartet Old and New Dreams with Dewey Redman, Ed Blackwell, Charlie Haden and Don Cherry, Still Dreaming helped to open the 59th Monterey Jazz Festival with loose-limbed grit and capering grace, as Blade made every tune feel like it was designed for dancing. Joshua joked at one point that the project “is a tribute to a tribute band, which is kind of postmodern,” but there wasn’t a jot of air-quote irony in the performance, whether the quartet was playing Cherry’s seductively sinuous “Guinea” and Dewey’s scorching “Rushour,” or originals like Joshua’s spaciously lowdown “Blues for Charlie” and Colley’s buoyantly bouncing “New Year” (which sounded like kissing kin to Ornette’s “Una Muy Bonita”).

Redman and Blade performed in various situations throughout the Sept. 16-18 weekend, with the Bad Plus Joshua Redman offering another avenue through which the saxophonist is addressing the legacy of his father, one of jazz’s more fascinating recent midlife adventures. Blade displayed a completely different facet of his boundless rhythmic palette during a brush-centric set with John Patitucci’s Electric Guitar Quartet, and combined volatility with the utmost sensitivity on the world premiere of Wayne Shorter’s “The Unfolding.” Written for his celebrated quartet and the 10-piece Monterey Jazz Festival Wind Ensemble, conducted by Nicole Paiement, the 25-minute piece mapped a previously uncharted but recognizably Shorter-ian corner of his expansive harmonic universe-a parsec filled with swirling, interlocked melodic lines and bright, flashing cadences (particularly around the reed system).

As the world’s longest continuously running jazz festival, Monterey has long taken care to celebrate jazz heroes and its own history in presenting them. Another highlight of the weekend was Christian McBride’s “Tribute to Quincy Jones: The A&M Years,” which had every excuse to end up as a train wreck. Despite a schedule that would keep three normal people in a tizzy, McBride pulled together a supremely satisfying set, with John Clayton conducting the 20-piece Monterey Jazz Festival Orchestra and a host of sensational guests including pianist Alfredo Rodríguez, bassist Richard Bona and harmonica player Grégoire Maret.

Focusing on three albums that were quickly overshadowed by other jazz stars’ crossover recordings-1969’s Walking in Space, 1970’s Gula Matari and 1972’s Smackwater Jack-McBride made excellent use of the considerable musical resources as his disposal, particularly the three players from the original sessions. With solos on just about every piece, flutist Hubert Laws played with steely authority, with each note cutting through the rapidly cooling night air in the outdoor arena. Pianist Don Grusin sounded crisp and incisive, but the revelation was vocalist Valerie Simpson. Sounding and looking magnificent a few weeks after her 70th birthday, she and three backup singers summoned the Age of Aquarius with an epic arrangement of “Walking in Space (My Body).”

Vocalists provided many of the weekend’s most dramatic thrills. Performing with her working trio led by pianist Aaron Diehl, Cécile McLorin Salvant played a typically nimble and jaw-dropping set offering a kaleidoscopic view of erotic torment-from her briskly swinging version of Bob Dorough’s besotted “Nothing Like You,” to a slow and tortured arrangement of Noël Coward’s “Mad About the Boy” and a rendition of Cole Porter’s “All Through the Night” that revealed the song as a booty-call anthem. Maceo Parker mostly gave his horn a rest while channeling Ray Charles’ oaky timbre alongside an orchestra stocked with Brother Ray veterans (saxophonist Ricky Woodard did his old boss proud). And Santa Cruz-based Brazilian vocalist Claudia Villela played a stunning duo set with Vitor Gonçalves on accordion and piano, focusing on her original songs.

The festival closed with another Quincy Jones protégé, the London-based 22-year-old Jacob Collier, who has earned an avid international YouTube following with a series of wildly imaginative videos created via multitracking. Turning his home-studio creations into something he could recreate onstage in real time took some serious rocket science, and with Ben Bloomberg, a Ph.D. student at the MIT Media Lab, he found an ideal collaborator. With 3D-capture video loops and a specially designed vocal harmonizer, Collier created a multimedia performance drawing on material from his recent album In My Room (Membran). The effect was delirious and dizzying, kind of like stepping into John Malkovich’s head in Being John Malkovich-if Malkovich could create sumptuous a cappella chords and accompany himself on four or five instruments.

But before anyone starts to think accompanists are old-hat, can I take a minute to observe that this is a golden age when it comes to jazz drumming? At the end of the weekend, it was impossible not to be struck by the overwhelming quality and vividly individual trap-set voices evident on the fairgrounds. These are 17 of the drummers I caught, and it wouldn’t be hard to add another 10 that I missed: Terri Lyne Carrington (this year’s artist-in-residence), Blade, Mark Guiliana, Kenny Wollesen, Dave King, Billy Drummond, Lewis Nash, Billy Hart, Gregory Hutchinson, Tom Rainey, Ronald Bruner Jr., McClenty Hunter, Henry Cole, Clarence Penn, Tim Horner, Jerome Jennings and Johnathan Blake. Damn.

“It’s time to imagine a place where we can come together,” Danilo Pérez said from the hallowed stage of Washington, D.C.’s historic Sixth & I … END_OF_DOCUMENT_TOKEN_TO_BE_REPLACED

At the Zeiders American Dream Theater in Virginia Beach, Va., between April 8 and 10, the Vocal Jazz Summit convened in person for the first … END_OF_DOCUMENT_TOKEN_TO_BE_REPLACED

The Big Ears Festival returned to Knoxville in a big way in late March, drawing an estimated 30,000 music enthusiasts from across the U.S. and … END_OF_DOCUMENT_TOKEN_TO_BE_REPLACED

Let’s get this out of the way: The Savannah Music Festival is not a jazz festival. Held over the course of 17 days in late … END_OF_DOCUMENT_TOKEN_TO_BE_REPLACED