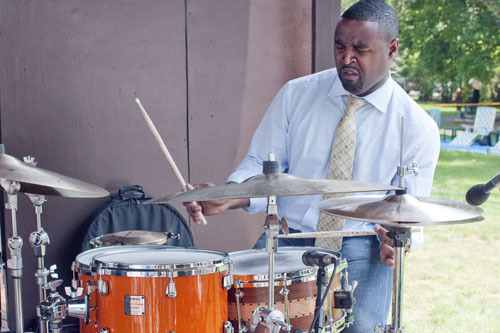 Too often with drummer-led jazz combos, a live set becomes little more than a showcase for the drummer’s abilities, showing off percussive gymnastics at the expense of the music. Not so with Kendrick Scott, who despite possessing some of the finest chops of any young drummer around demonstrates a focus on using his drumming to serve his music, not his music to serve his drumming.

Scott has a become a regular visitor to the nation’s capital over the past year and a half, anchoring Kurt Elling’s band and serving in his regular role as Terence Blanchard’s drummer, but his visit to Bohemian Caverns with his group Oracle on the occasion of the release of the album Conviction offered Washingtonians a broader look at Scott’s musical vision. Scott led his Oracle through a set built to showcase the new album, highlighting his growth as a composer and bandleader in addition to his superb drumming.

The set kicked off with “Pendulum,” a mid-tempo tune reminiscent of early Pat Metheny that also leads off the album, followed by “Apollo,” a ballad showcasing John Ellis on saxophone. Scott was restrained in his drumming throughout both tunes, offering the occasional attention-grabbing fill but generally allowing the songs to speak for themselves.

Scott and company picked up the pace with an instrumental cover of the Sufjan Stevens song “Too Much.” Shortly into the song, Scott and bassist Joe Sanders fell into a deep groove that had somewhat eluded them thus far in the set, and they remained in lockstep throughout the rest of the performance.

It was pianist Taylor Eigsti and guitarist Mike Moreno’s time to shine on Herbie Hancock’s Martin Luther King tribute “I Have a Dream,” with the two riffing inter-dependently off of each other while Scott subtly responded to them without distracting from their playing. The whole band came together for an outstanding closing number, “Cycling Through Reality,” and it was easily apparent that Scott was pleased with his band.

Scott has surrounded himself with four talented collaborators, and while each offered worthy contributions to the set, it was clear that the Oracle is Scott’s singular vision, and the perfect vehicle for Scott at this stage in his musical development. After just four combined nights playing together in New York City and Washington, D.C., Scott will have to say goodbye to his Oracle for awhile as he jets off to fulfill his duties playing with Blanchard and Elling. This limited time spent together as a group was apparent during their set, with communication issues and lack of cohesiveness occasionally evident. Still, the Oracle plays extremely well together for the most part, and if Scott is able to find time in his packed schedule playing with Elling and Blanchard to gig more with the Oracle, they could turn into a formidable quintet.

At only 32 years old, Scott has already made his name as one of the best drummers around, but it is clear both from Conviction and his D.C. set that he has his sights set on something more. Though his band was a bit shaky at times due to a lack of time spent playing together live, in his recent run of D.C. shows Scott has proven himself one of the most promising young musicians in jazz.

Among the many physical, spiritual, and institutional losses related to the still-ongoing pandemic is that of Los Angeles’ renowned Playboy Jazz Festival (PJF) at the … END_OF_DOCUMENT_TOKEN_TO_BE_REPLACED

It’s difficult to imagine what the stage and the audience would have looked like at Gaillard Center in Charleston, South Carolina, if Rhiannon Giddens’ new … END_OF_DOCUMENT_TOKEN_TO_BE_REPLACED

“It’s time to imagine a place where we can come together,” Danilo Pérez said from the hallowed stage of Washington, D.C.’s historic Sixth & I … END_OF_DOCUMENT_TOKEN_TO_BE_REPLACED

At the Zeiders American Dream Theater in Virginia Beach, Va., between April 8 and 10, the Vocal Jazz Summit convened in person for the first … END_OF_DOCUMENT_TOKEN_TO_BE_REPLACED