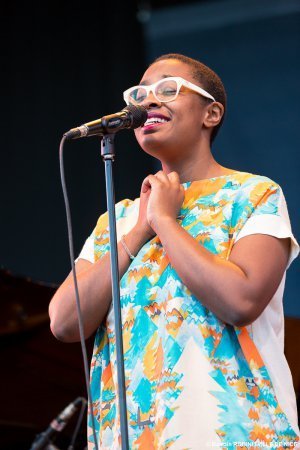 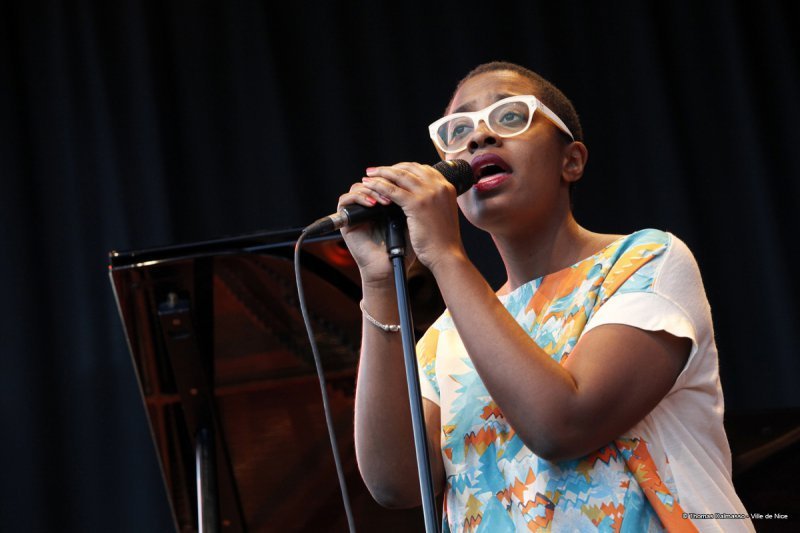 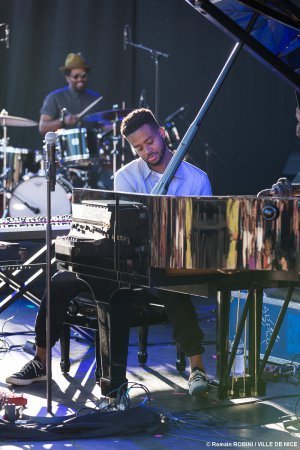 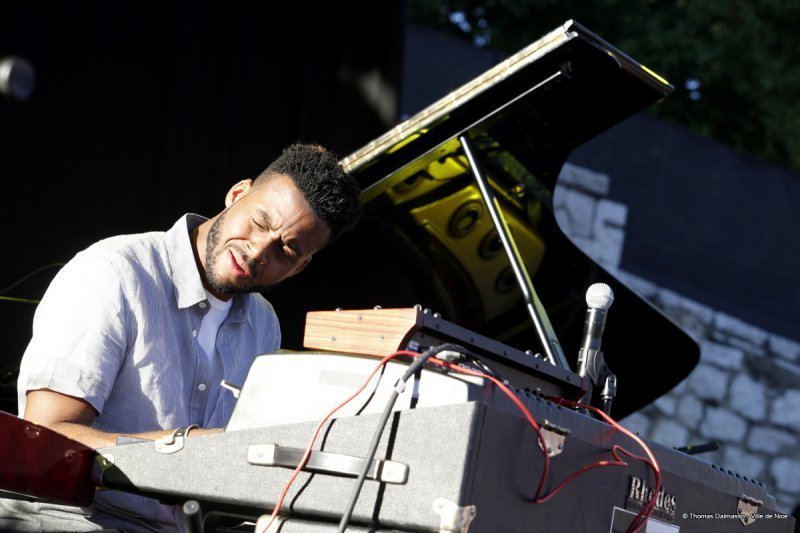 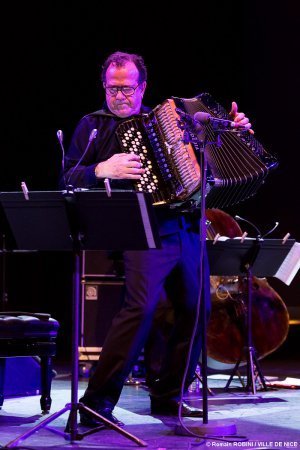 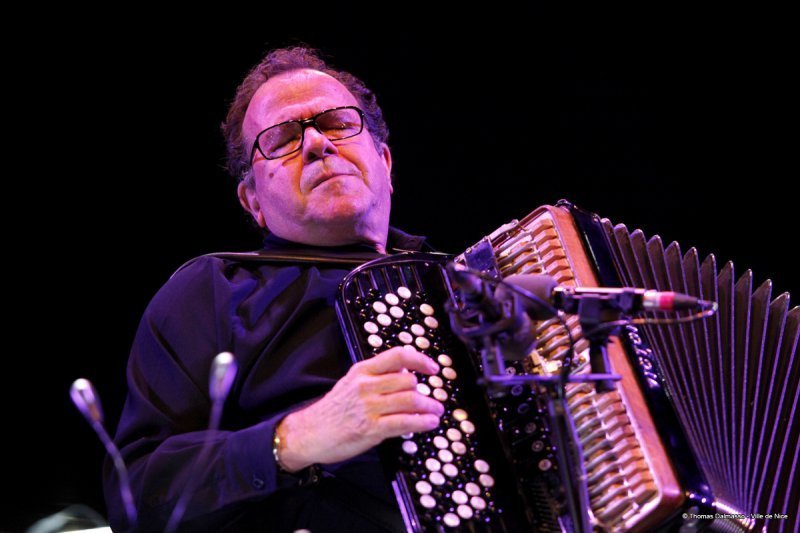 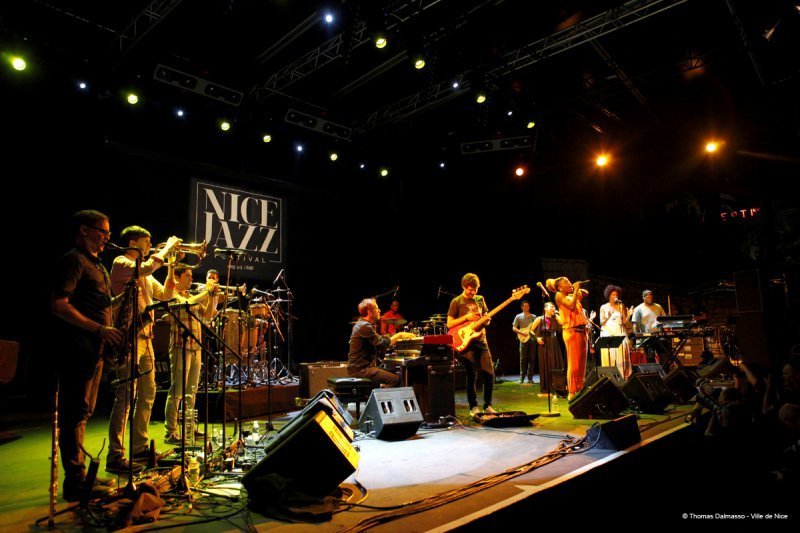 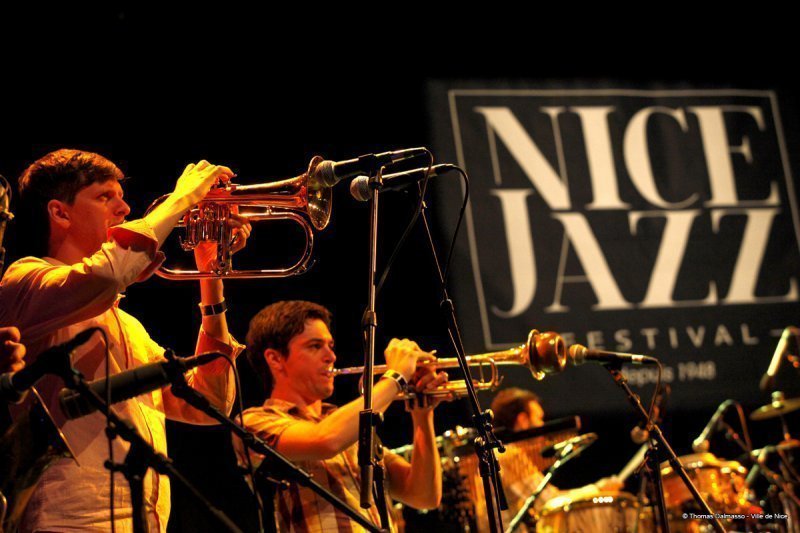 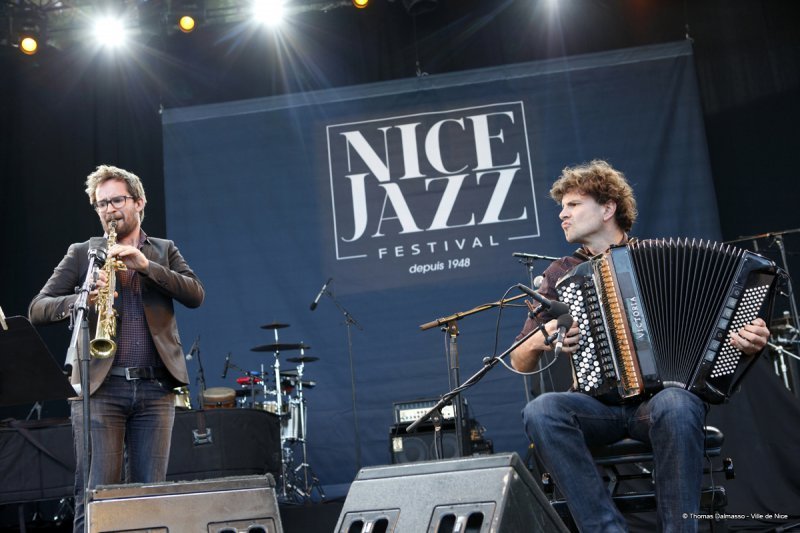 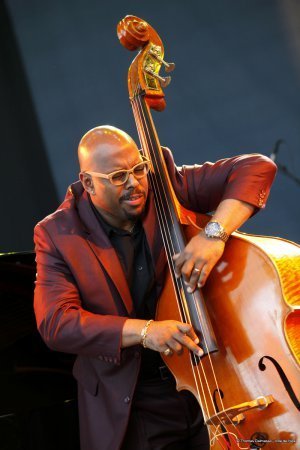 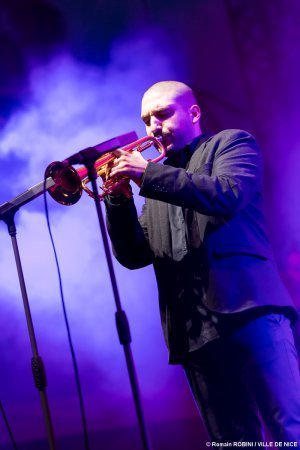 Of Europe’s extended family of summer jazz gatherings-large and small, long-running and relatively new-the new Nice Jazz Festival stands out as one of those that can proudly call itself world-class. It maintains a scale that invites intimacy, connection and a relaxed energy that offers a refreshing change from many multiple-stage events that find fans running from one corner of the festival to another in order to catch the more popular acts. Nice’s five-day event has but two, closely arranged stages and with only three acts per day on each-and yet, with the high quality of the music presented there this year, from European and American modern jazz to French neo-soul and electronic pop, and even a classic rock group for good measure (Deep Purple-with organ riffs and power chords still intact)-choices still had to be made.

That is to say that the 2014 version of the Nice Jazz Festival was a stirring and unqualified success of which the city can be proud-one that benefitted from the array of American jazz names circulating through Western Europe this time of year, yet including a large dose of talent that could only be heard in France.

Before celebrating the music and musicians, I should explain that I call the Nice Jazz Festival “new” as it is still settling into its relatively novel location downtown in a walled-off plaza just steps away from the Promenade des Anglais and the city’s fabled stony beaches. With Mediterranean breezes wafting through, it’s a marked change from where the festival used to take place in Cimiez, a more wooded area around what remains of the city’s Roman amphitheater, yet this really is where Nice and world-class jazz first came together-in 1948, headlined by Louis Armstrong and featuring European jazz legends of the day Django Reinhardt and Stephane Grappelli. Nice Jazz turned out to be a glorious one-off event, however, and was followed by 23 years of silence while other festivals, like the one a few minutes drive to west in Antibes, sprung up in its absence.

What brought the festival back to the original site in 2011-the outdoor, bowl-like Theatre de Verdure, with the larger temporary stage Scéne Massena a two-minute walk nearby-is a rare example of a city government stepping in and actually improving upon what was a privately run festival, one with a long and fabled history. That was the year Nice mayor Christian Estrosi, a former motorcycling champion with a feeling for international culture and regard for how the world looked at his city, used his connections to adopt the festival as a public service, reducing its size and dropping ticket prices to a family-friendly amount: a single-day ticket for six acts now costs a mere 35 euro. Judging by the turnout on all three days that I attended, it’s a winning formula: the balance of talent, price and generous weather filled the grounds without overflowing its capacity.

I was thoroughly impressed by almost all of the acts-certainly all of the jazz talent. My personal favorites came in the form of both expected crowd-pleasers and surprises. In the former category. Christian McBride’s current trio-with Christian Sands on piano and the amazing Ulysses Owens, Jr. on drums-was a study in fleet, expressive clarity and earthy, rhythmic precision. Kenny Garrett’s quintet rose from Coltrane-inspired spiritual depths at the start to his set-closing “Happy People” that had the audience on its feet. Trumpeter Ibrahim Maalouf-whose evocative, mood-setting music tends to exotic, Mediterranean flavors and the dramatic builds of a movie soundtrack-has attained a level of popularity in his native France on the level of a Chris Botti; his band Illusions now features an electric, R&B-inspired rhythm section and another three trumpets as well.

Topping the list of unexpected pleasures was the expansive and stirring duet of accordionist Emile Parisien and soprano saxophonist Vincent Peirani-current poll-winners in France-whose music brought together strains of French muzette and ethereal, free-bop of the 1960s; Peirani’s gifted melodic sensibility is one worth following. Saxophonist Eli Degibri played a lithe and spark-filled set, leading his Israeli quartet, which included the extra-young standouts Ofri Nehemya on drums, Gati Lehavy on piano, and a plea for peace in Gaza (spoken in English) that the French audience supported enthusiastically; his rendition of the Arabic-sounding “Hysm” was equally moving. (Ironically, there’s a sign just a few yards away announcing to anyone who cares to read it that the nearby plaza is named “Yitzhak Rabin Square.”) Keyboardist Kris Bowers, primarily on tour as part of Jose James’ group, kicked off this year’s Nice Jazz Festival with his first headlining gig, switching between acoustic and electric piano, playing tunes from his debut album Heroes and Misfits.

Though I should be familiar with Cecile McLorin Salvant’s current achievements, it’s only circumstance that I have only caught her lately as featured vocalist with other bands. Hearing her with the intelligent and perceptive support that pianist Aaron Diehl, bassist Paul Sikivie and drummer Jamison Ross provide her was a revelation. When she’s doing her own thing, Salvant brings to mind both Abbey Lincoln’s storytelling talent and Betty Carter’s expressive phraseology, hanging on to syllables, sometimes only half-singing a lyric to get across the a complex emotion-mental anguish or sentimental uncertainty-she was looking for. She already had the crowd in her proverbial palm; when she offered two songs in French, Salvant left the stage to a standing ovation.

I was thoroughly taken by the songs and rock posturing of the diminutive, Ron Jeremy-looking Har Mar Superstar-and enjoyed not being sure how real his caricature of a higher pitched Joe Cocker was; it sounded sincere and he delivered. Ben L’Oncle Soul-the French soul revivalist on the order of Raphael Saadiq, is dedicated to updating the soul formula of live R&B band with a full horn section and harmony singers, yet with a slightly more modern touch. His approach was about fun and uplift and good times, and the responsive audience was all the proof needed to show that he had succeeded. Interestingly, the variety of popular groups, many based in France, that I caught at Scene Massena each seemed to be channeling a certain R&B era and style-Metronomy favored a post-disco, synthesizer vibe; Patrice was deep in the good-feeling late ’90s reggae/hip-hop/neo-soul bag (think Michael Franti with less politics); and Electro Deluxe, the French answer to a ’70s R&B revisitation with a heady funk-jazz flavor, who recently steered themselves away from loops and sample to a more organic live-band sound with backup vocals and horns.

The standard scheduling strategy that any festival follows is to build the day from smaller to larger groups-in the sense of both size and popularity-in order not to allow the energy or expectation to falter. Most certainly on the Theatre de Verdure, Nice Jazz achieved its goal with evening closers on all three nights that I witnessed-they were the crowd-pleasing and critical highlights of the festival in my humble estimation.

The Cannes-born accordion maestro Richard Galliano was chosen as the annual “Godfather” of the festival, an honor that had him closing the opening night supported by Nice’s own 15-piece jazz orchestra, performing a high-powered, wide-ranging set that included tunes by Jimmy Smith (“The Cat”), Nat Adderley (“Work Song”), Astor Piazzolla (“Libertango”), plus a dedication to the recently deceased singer Claude Nugaro, another local jazz hero. The second evening saw Snarky Puppy recreate their 2013 vocal album Family Dinner with four of the project’s original eight singers (N’Dambi, Malika, Shayn Steele and Magda Giannikou) energetically weaving together Southern blues and gospel, West African highlife and Greek folkloric songs (on which Giannoukou also played accordion). Watching Michael League lead the entire ensemble enthusiastically from stage center with economy is to be impressed as to how he’s grown into his role as bandleader. And speaking of Brooklyn-the Daptone Super Soul Revue was ably hosted by guitarist Binky Griptite and featured star turns by soulman Charles Bradley, Antibalas and Sugarman 3 (referencing the Afrofunk of Fela Kuti) and finally the soul power of Sharon Jones.

Jazz festivals come and go, and a few manage to return like Nice Jazz has-and before I sign off on this year’s offerings, a little more back story: Most recently (and significantly) the festival also hired two veterans of the French jazz scene to program and produce, and having seen them in action as well as the results of their efforts this season, I can say from what I witnessed that they chose well. Frederica Randrianome hails from Nice and is the director and public face of the festival, handling the festival’s production and publicity reins ably. Sebastien Vidal-known for booking and running Le Duc des Lombards, Paris’ leading jazz nightclub-is its artistic director. Vidal’s experience and wide-ranging taste and his ability to balance the festival’s jazz allegiance with a more mainstream, crowd-pleasing approach was truly the driving wheel behind the triumph of this year’s season.

Walking the festival site the day before it opened, Vidal spoke pointedly about his intention to create traffic between the two stages, to get a few pop music fans to check out the primarily jazz talent performing at Theatre de Verdure, while trying to convince the festival’s director to agree to allow some of the more jazz-oriented artists to play Massena (Ibrahim Maalouf and Nikki Yanofsky were two examples of that push).

“Because of this, I won’t do thematic nights-a reggae night or hip-hop night like many festivals do. It’s like putting up a sign that says, ‘If you don’t like this music, or even if you don’t know if you do, just stay away.’ What’s the point with that? I think now the words ‘jazz festival’ means it’s open to any sort of music, some of your favorites plus some stuff you might want to check out even if you don’t call yourself a jazz fan.”

Of course, the vast majority of jazz festivals these days deal with that same sort of balance-mainstream rock, R&B and such groups booked alongside well-known jazz talent. That’s just modern, box-office reality. That the question “How can you call it a ‘jazz festival’ when you have so-and-so and so-and-so on the bill?” is still being asked by critics and journalists decades after Jethro Tull played Newport, and Stevie Ray Vaughan played New Orleans, simply speaks to a persistently shallow understanding of the history or reality of these events-not to mention the always fluid definition of the word “jazz.”

I overheard a radio interview with Randrianome on an English-speaking, Cote d’Azur station in which the DJ asked that very question as a set-up to playing a Deep Purple track. She wisely sidestepped the query and simply answered that the festival’s aim at exposing audiences to music they wouldn’t normally hear. “Brava!” I thought-stylistic integration is such a basic idea and it’s been around for generations, and an old Fillmore Auditorium poster came to mind that lists Led Zeppelin and Rahsaan Roland Kirk. The Nice Jazz Festival gets that idea; somewhere Bill Graham is smiling.

It was the warmest October on record in Seattle. Usually, when the Earshot Jazz Festival comes to town, it provides an escape from the autumn … END_OF_DOCUMENT_TOKEN_TO_BE_REPLACED

It was bracing to stroll into a brand-new creation for a story about destruction. Sixty years after its opening and 45 years after its last … END_OF_DOCUMENT_TOKEN_TO_BE_REPLACED

“You better start swimmin’ or you’ll sink like a stone,” Bob Dylan stated profoundly in 1963. Throughout its unrivaled 65-year history, the Monterey Jazz Festival … END_OF_DOCUMENT_TOKEN_TO_BE_REPLACED

For years, the Pittsburgh International Jazz Festival (PIJF) took place on the street. Over one weekend in June, Downtown thoroughfares Penn Avenue or Liberty Avenue … END_OF_DOCUMENT_TOKEN_TO_BE_REPLACED