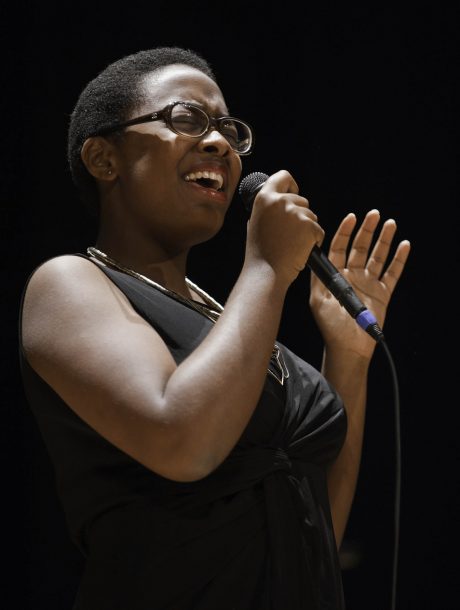 The phenomenal 24-year-old vocalist Cécile McLorin Salvant sold out her first set at the Regattabar this past weekend, and the room was nearly as full when she brought her quartet out for the night’s second set. Only a quarter of the dozen songs she would perform in the late show came from WomanChild, her splendid recent release from Mack Avenue Records, but she proved equally masterful on the expanded repertoire of well-chosen standards.

The set opened with “I Only Have Eyes for You,” with Salvant, in her trademark white glasses and a black-and-white print dress, improvising like a horn on the tune’s familiar lyrics, stretching their duration to suit her mood, and playfully tossing in references to “big, fat bug eyes” as the tune neared its end. Her gifted pianist from the album, Aaron Diehl, contributed a fine solo, and Paul Sikivie’s walking bass and drummer Pete Van Nostrand’s brushes provided able rhythmic accompaniment. “Nobody,” a classic from the album with a comic edge, which Salvant noted had been written by Bert Williams in 1905, was up next. It began with a frilly piano intro, and then Salvant sang the narrator’s sad story drolly, with Diehl stepping in partway through with a solo wild enough to make himself smile.

Salvant next took “On a Sentimental Side,” a favorite associated with Billie Holiday, slow and straight, and followed it with Cole Porter’s “I Get a Kick Out of You,” which also started out contemplative and slow but shifted uptempo as the tune approached its namesake line. Van Nostrand shifted from brushes to sticks, and, fittingly, Diehl, the 2011 Cole Porter Fellow in Jazz of the American Pianists Association, took another energetic solo.

The folk classic “John Henry” was kicked off by a Van Nostrand drum roll, and Salvant stood beside Sikivie looking on smiling as he and Van Nostrand provided the tune an introductory jazz foundation. Salvant then stepped in to tell the story, shifting dynamically as she did so-high and airy one minute, low and throaty the next-Diehl making eye contact with her as she did so. When his solo came it was a doozy, developed brilliantly and played mostly with his eyes closed, elevating the tune from the already high standard set on Salvant’s album.

When “John Henry” had been laid to rest, Salvant announced, “We’re going to do another Cole Porter tune. This is my favorite. It’s called ‘So in Love.'” She sang the ballad breathily, and Van Nostrand switched to mallets for it. Then the mood again shifted as she moved on to a classic from Porgy and Bess, “It Ain’t Necessarily So,” her enunciation drawing out the humor in playful rhymes like that involving Jonah making “his home in/That fish’s abdomen.”

Those shifts in mood were as satisfying as the shifts in musical dynamics, and Salvant carried off both off with poise and aplomb. And they kept coming in the five songs to follow, which all were linked to one aspect of love or another. “If This Isn’t Love,” from the 1940s musical Finian’s Rainbow, was notable for Diehl’s brisk solo, which called to mind Ahmad Jamal. Next up was a “dirty blues,” “You’ve Got to Give Me Some,” made famous by Bessie Smith. Sikivie and Van Nostrand left the stage for it, and Diehl alone provided blues-drenched accompaniment to Salvant as she made her way through the song’s series of comically unsubtle and increasingly risqué double entendres. Then the mood shifted back from funny to sad for “Guess Who I Saw Today,” a ballad Salvant linked to Carmen McRae before singing the tale of a woman announcing to her husband that she had stumbled onto his affair. The mood lightened again with “I Wish I Could Shimmy Like My Sister Kate,” and then it shifted yet once more for “one of Billie Holiday’s hits,” “What a Little Moonlight Can Do.” Van Nostrand got a full-fledged solo here, and Diehl had another strong one as well. But Salvant was in especially fine form, stretching out her embellishments in concert more that she does on the album, lowering her microphone dramatically as she repeated the words “I love you” a couple of times before the band joined back in to wrap things up.

For an encore, Salvant sang the Bob Dorough/Dave Frishberg comic gem “I’m Hip,” apologizing in advance for any lyrics she might goof up, then actually updating the piece by inserting a line of her own (“Miley Cyrus twerks on my friend, I’m so hip”). She can write a little bit, too, as evidenced by three tracks on that new album of hers. But her brilliance at choosing and singing standards was proof those old songs still have lots of life left in them.

It’s difficult to imagine what the stage and the audience would have looked like at Gaillard Center in Charleston, South Carolina, if Rhiannon Giddens’ new … END_OF_DOCUMENT_TOKEN_TO_BE_REPLACED

“It’s time to imagine a place where we can come together,” Danilo Pérez said from the hallowed stage of Washington, D.C.’s historic Sixth & I … END_OF_DOCUMENT_TOKEN_TO_BE_REPLACED

At the Zeiders American Dream Theater in Virginia Beach, Va., between April 8 and 10, the Vocal Jazz Summit convened in person for the first … END_OF_DOCUMENT_TOKEN_TO_BE_REPLACED

The Big Ears Festival returned to Knoxville in a big way in late March, drawing an estimated 30,000 music enthusiasts from across the U.S. and … END_OF_DOCUMENT_TOKEN_TO_BE_REPLACED