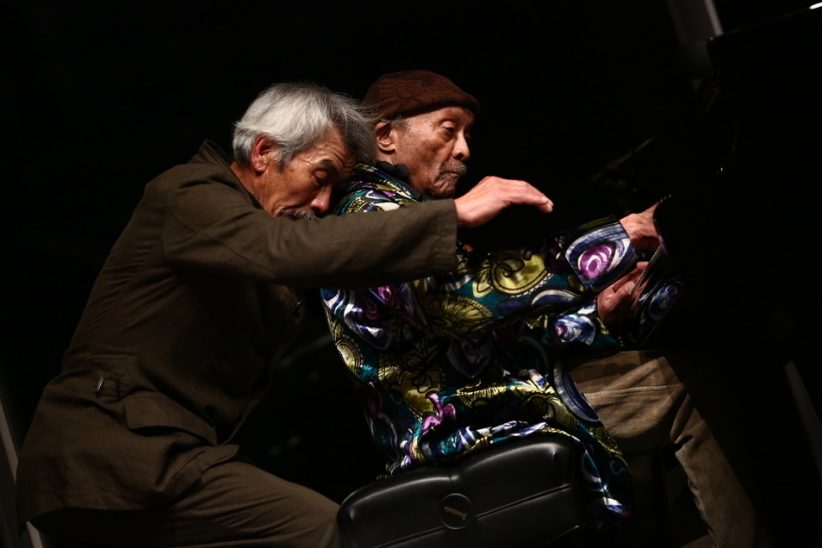 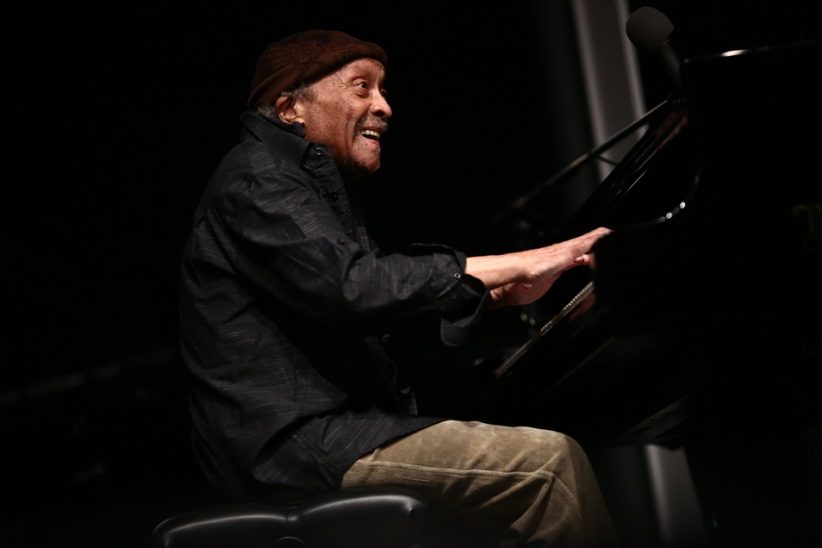 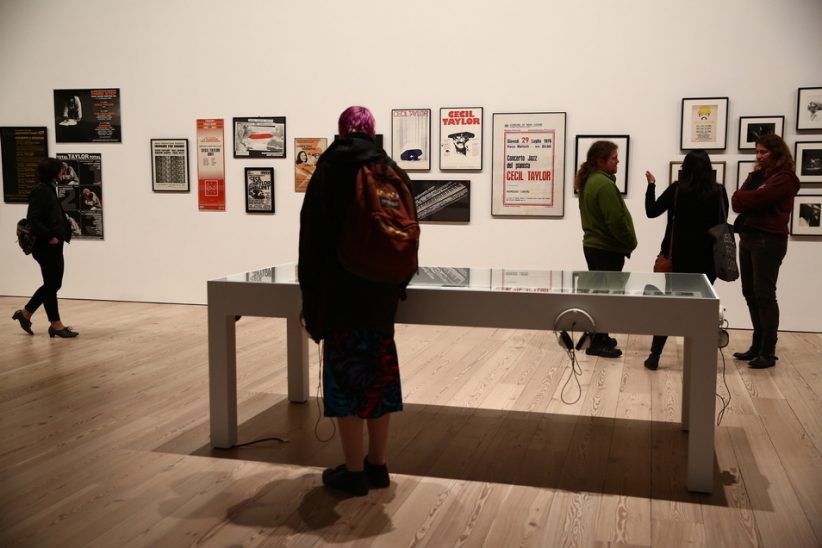 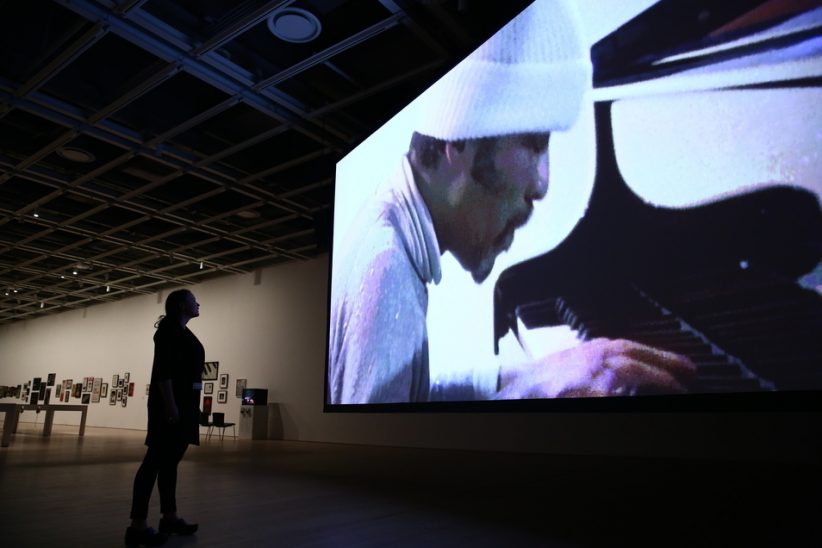 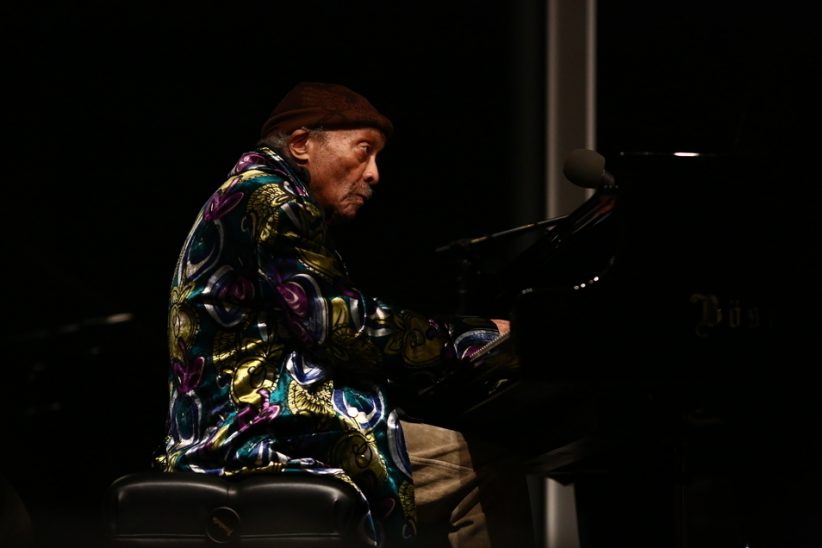 “Open Plan: Cecil Taylor,” an exhibition at the Whitney Museum of American Art, inhabits a grand floor-through gallery on an upper tier of the building. The gallery measures an imposing 18,200 square feet, making it the largest column-free exhibition space in New York-and yet it seems barely capable of containing the irreducible creative energies of the subject at hand. That was the overwhelming impression left by a glorious, transfixing and challenging opening concert on Thursday night, featuring Taylor at the piano with two sets of volatile collaborators.

Taylor has been a restless paragon of the avant-garde for more than 60 years, leaving an incalculable influence on the development of free improvisation, while also embodying an ideal of rigorous interdisciplinary practice. At 87, he’s among the greatest living figures in American music, but no less seriously a poet, and something like a philosopher of movement and spatial dimension. To the extent that it’s a career retrospective, “Open Plan: Cecil Taylor” makes this point implicitly, with cases full of his hand-scrawled poetry and graphic scores, among other ephemera. On Thursday the point was also made explicit, in an emphatic present tense.

The evening had been billed as a Taylor concert with two longtime colleagues, the Japanese dancer Min Tanaka and the British drummer Tony Oxley. This was newsworthy in itself, given that onstage sightings of Taylor have become increasingly rare. The deep history he has with Oxley and Tanaka, separately, imbued it with a supercharged feeling before note one.

There was, nevertheless, a warming-up phase of the performance, as each artist tested the air. Taylor opened with a tentative scamper along the keyboard of his Bösendorfer grand, while Tanaka moved his body in swooping arcs on one side of the stage. Oxley, seated not at a drum kit but rather a tabletop electronics console, played a series of metallic-sounding chimes and other clanky industrial sounds, which ultimately felt like a distraction. After a while he seemed to realize this, falling silent for most of the hour, resting his hands in his lap.

Having experienced Oxley in ecstatic duologue with Taylor a handful of times over the years, this was a minor disappointment-but unmistakably the right move. It cleared a space for Taylor and Tanaka to engage more deeply in their intently focused gestural communion.

Tanaka, whose training once marked him as a disciple of butoh, brought a controlled compulsion to his movements, often disorienting in effect and sometimes in direct response to Taylor’s pianism. That accommodation flowed both ways: At one point, as Tanaka engaged in slow, balletic formalism, Taylor played a passage of delicate and flowery consonance, before bombing the canvas with a sonic graffiti scrawl.

One sublime and terrifying section found Taylor hammering at the piano, with the flash of percussive lightning that has long been a trademark, while Tanaka staggered in slow motion along the foot of the stage, arms splayed, arcing his back so that his face, a rigid mask, was staring at the ceiling. As things were winding down, he crept up behind the piano bench, resting his head on Taylor’s right shoulder and gradually, incrementally sliding to the floor.

For much of the hour, the piano playing was restive but reflective, ending in a state of deliberative rapture. But it was also, for anyone wondering about Taylor’s stamina, a powerful show of conviction and undiminished force. Considering the performance as a whole, I jotted a phrase in my notebook: “episodic and reactive, a series of unfolding events.”

As it happened, Taylor said something similar during the concert’s second half: “A succession of events/united and mutually dependent.” These lines came in the context of a poetic recitation, alongside oblique references to a rotating axis, fungal spores and “vegetative propagation.” Taylor was reading from a sheaf of loose-leaf papers, his voice thin and his pronunciation clear. The other musicians onstage quieted their rustling abstraction so that he could be heard.

This was a surprise, unbilled performance by a midsize ensemble that Taylor calls the New Unit, stocked with longtime disciples like alto saxophonist Bobby Zankel and drummer Jackson Krall. Also in the lineup were Elliott Levin on tenor saxophone and flute, Harri Sjöström on soprano saxophone, Tristan Honsinger on cello, Albey Balgochian on bass and Jane Grenier on spoken word. Far wilder and noisier than the first half, it captured an unruly freeform that Taylor has long embraced, in all of its squalling, rampaging exuberance.

There were scattered moments of distinction for individual members of the group, especially Zankel, whose sound served as a clear, powerful beam, and Honsinger, who held nothing back in his scratchy expressionism. Levin was a piercing element on flute and a burly presence on tenor, and he briefly ranted at the microphone.

Taylor’s response to these chaotic exchanges was striking: he grinned with a sort of beatific mischief, like a kid inventor watching his creation fly out of control. His piano playing was often swallowed in the cacophony, but he didn’t dial back his efforts, even throwing the occasional elbow on the keys. There was a feeling of release onstage, as if he were tickled to be at the center of so much roiling intensity. As the tide began to ebb, and time drew nigh, he stood and voiced a polite cessation order: “OK, thank you, gentlemen.”

“Open Plan: Cecil Taylor” continues for just 10 days, with programming that includes performances by Taylor’s peers, like drummer Andrew Cyrille; film screenings, lectures and guided listening sessions; and poetry readings by the likes of Nathaniel Mackey, accompanied by bassist (and former Taylor confrère) Henry Grimes. There is no repeat appearance by Taylor on the official schedule, but that hardly rules anything out. If there’s one lesson he has imparted over the course of his singular body of work, it’s the value of ready alertness in the face of an uncertain outcome.

In its first full edition since the onset of the pandemic, and with a new director of programming, the Festival International de Jazz de Montréal … END_OF_DOCUMENT_TOKEN_TO_BE_REPLACED

Among the many physical, spiritual, and institutional losses related to the still-ongoing pandemic is that of Los Angeles’ renowned Playboy Jazz Festival (PJF) at the … END_OF_DOCUMENT_TOKEN_TO_BE_REPLACED

It’s difficult to imagine what the stage and the audience would have looked like at Gaillard Center in Charleston, South Carolina, if Rhiannon Giddens’ new … END_OF_DOCUMENT_TOKEN_TO_BE_REPLACED

“It’s time to imagine a place where we can come together,” Danilo Pérez said from the hallowed stage of Washington, D.C.’s historic Sixth & I … END_OF_DOCUMENT_TOKEN_TO_BE_REPLACED