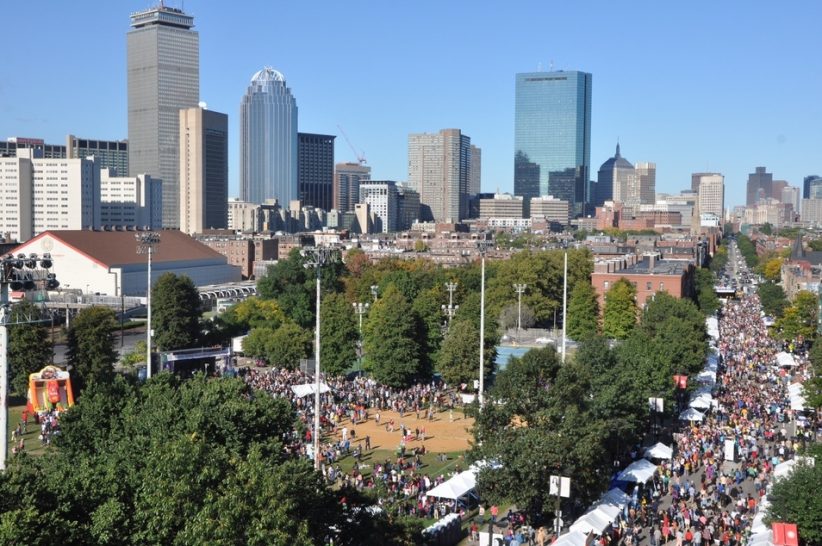 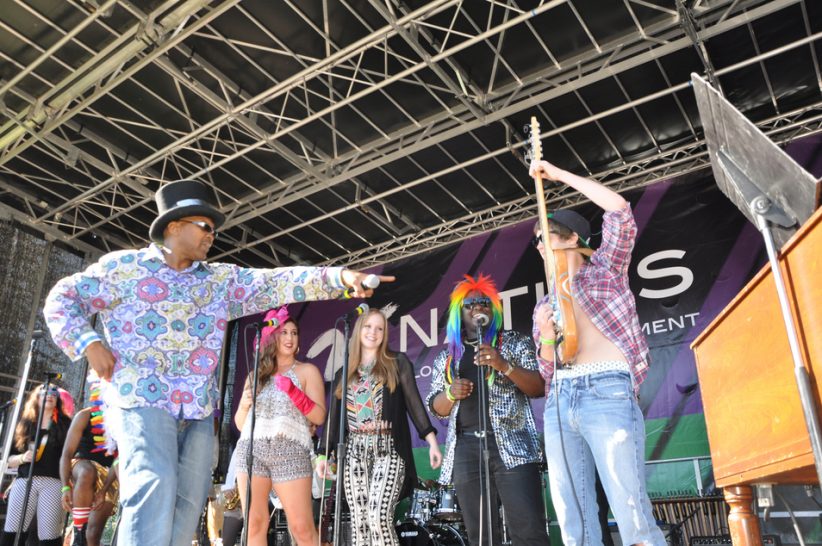 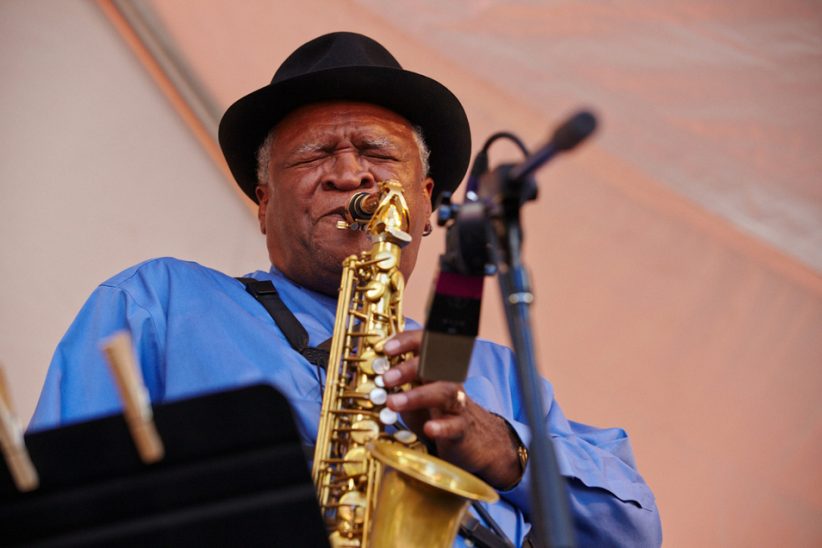 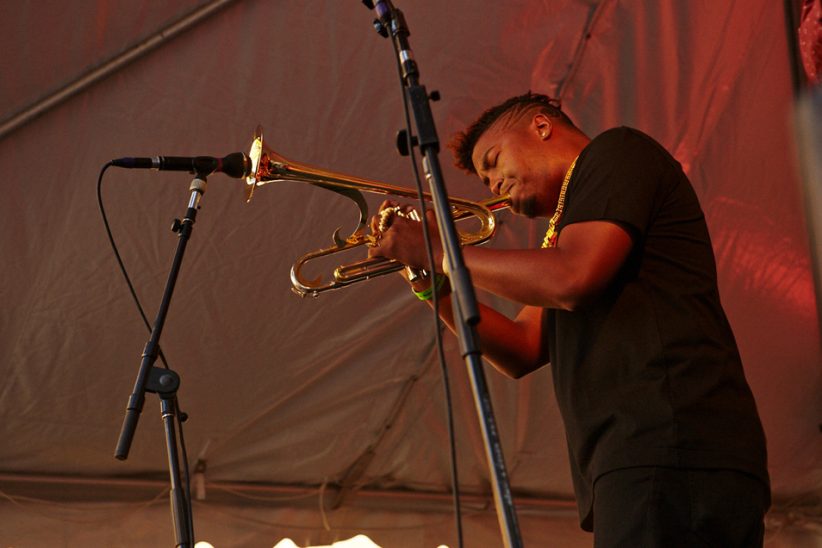 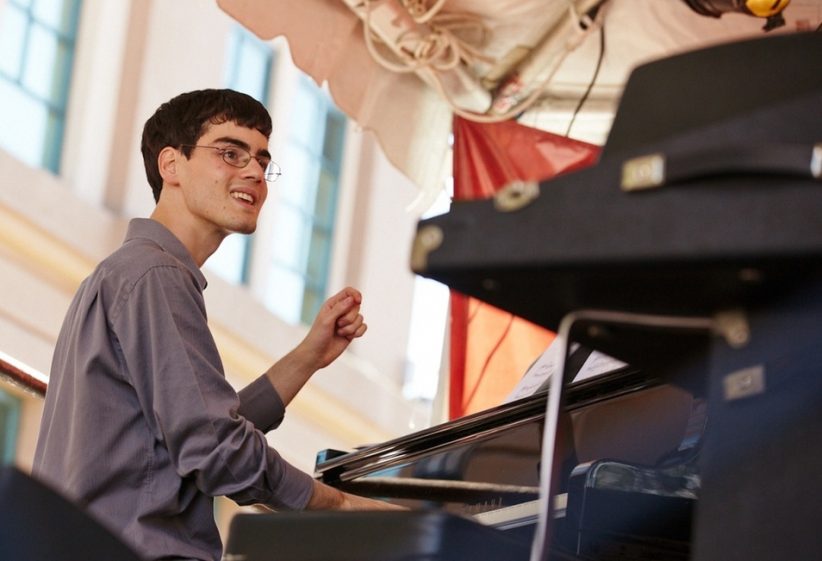 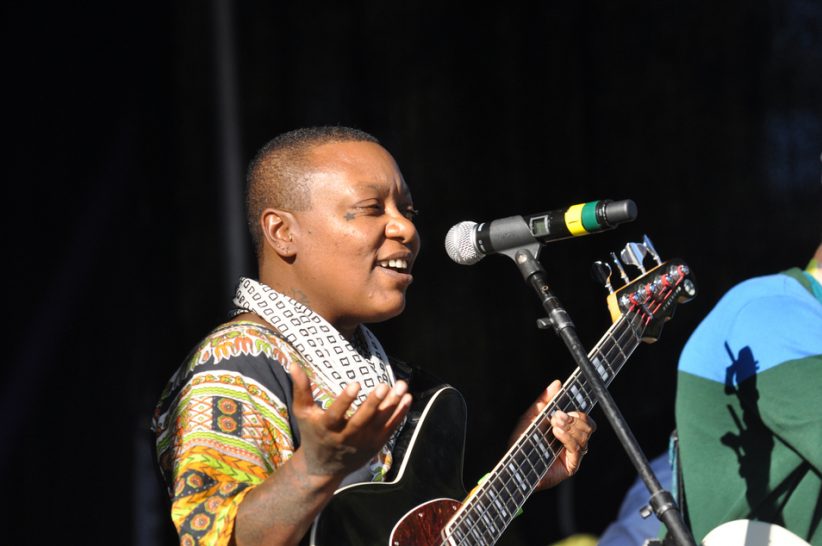 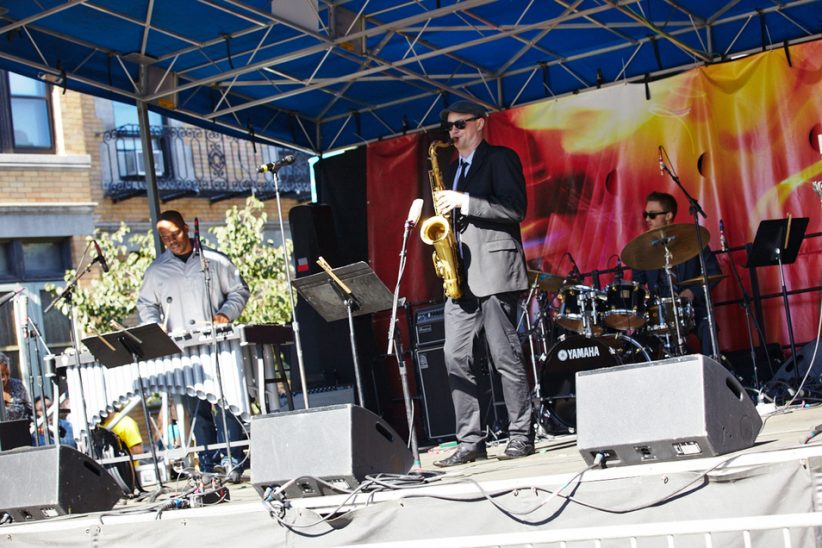 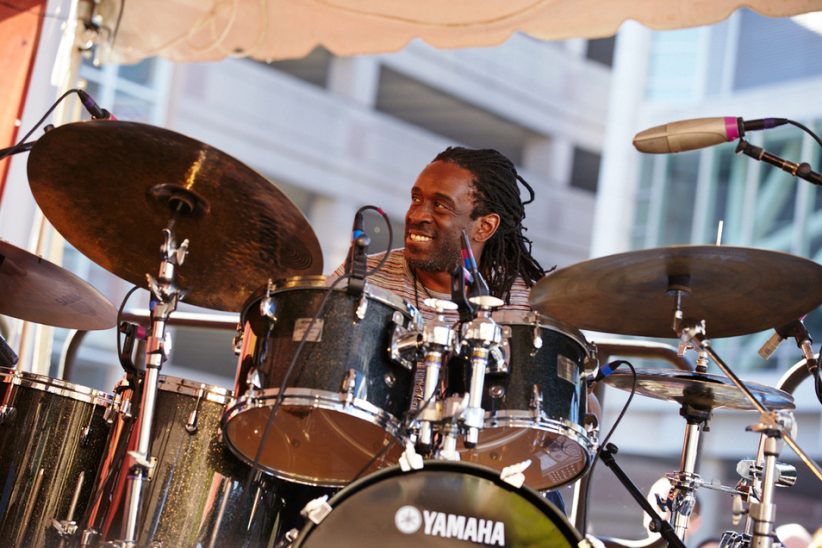 The Berklee BeanTown Jazz Festival commenced at a club this year, with Scullers playing host to two Friday sets by the New Gary Burton Quartet (two more would follow the next night). It was the second BeanTown appearance in three years by this all-star band-Burton on vibraphone, Julian Lage on guitar, Scott Colley on bass, Antonio Sanchez on drums-but in 2011 they had closed out the festival with a performance at the much larger Berklee Performance Center. This time, as last, they were promoting a new album (Guided Tour is the title of this one), but this visit-touted as part of Burton’s 70th-birthday tour was also a celebration of the leader’s just-published autobiography, Learning to Listen: The Jazz Journey of Gary Burton.

The intimacy of the club venue was a treat for those catching the group there. The audience could hear and see Burton’s four-mallet technique up close, as well as Lage’s phenomenal fretwork, Colley putting body English into his energetic bass lines and Sanchez’s rich dynamism at the kit. But a wider audience got the chance to hear the music as well, Friday’s second set being broadcast live on WGBH-FM, hosted by Eric Jackson.

That second set got underway with a cover of Mongo Santamaría’s “Afro Blue,” with stops for Colley’s “Never the Same Way” (from the quartet’s 2011 album, Common Ground), the standard “I Hear a Rhapsody” and Keith Jarrett’s “In Your Quiet Place” following en route to the set-closing cover of Burton’s fellow vibes great Milt Jackson’s “Bag’s Groove.” The ballad-like Jarrett tune, which Burton and Jarrett recorded together for a 1971 album, drew especially appreciative applause from the audience. (“Well, I’ll tell Keith,” Burton responded, before pausing to give his book a quick plug.) But three originals from the new album were also highlights. Burton’s own “Remembering Tano” was written for nuevo tango great Astor Piazzolla, with whom Burton recorded a live album (The New Tango) and whose music he has revisited on subsequent albums. Sanchez’s “Monk Fish” had a Monkish (as in Thelonious), jazz-standard feel to it, bluesy with slippery shifts in tempo and deft solos by Lage and Sanchez.

Lage’s “The Lookout” had a rock/funk feel to it in places, particularly when he and Burton cut loose on their solos. It seemed at those moments to hint at Burton having helped fuse jazz and rock nearly a half-century ago. And in introducing it, Burton reminded people that he and Lage have a history, too. “He looks very young,” acknowledged Burton of his 25-year-old sideman. “But we made our first record together when he was 15.”

Their history also includes their association with the Berklee College of Music, where Burton, Lage and Sanchez have all studied and taught. (Burton, who retired as a Berklee vice president a few years back, recently began teaching a MOOC-Massive Open Online Course-for the college, which he bragged 39,000 had signed up for.) No wonder, then, that the quartet is a repeat headliner for the Berklee-associated event, many of whose performers at the free, afternoon-long festival on Saturday also had Berklee ties. Three stages were in operation from noon to six on a gloriously sunny and warm autumn afternoon, for what resembled a jumbo-size block party running along the city’s Columbus Avenue from a point a few doors down Massachusetts Avenue from the venerable jazz club Wally’s Cafe. The Berklee Stage devoted to current and/or former Berklee students, Natixis Global Asset Management Stage tossing funk and other elements into the jazz mix, and the Aramark/Coco-Cola Stage working its way through this lineup of jazz pros: Giorgi Mikadze Group, Rick DiMuzio Group featuring Lage Lund, Matt Savage Quartet featuring Bobby Watson, Will Calhoun Trio and trumpet star Christian Scott.

Not that there weren’t impressive jazz pros at the Berklee stage. The 2:30 set brought Mike Tucker and his organ trio, with Jake Sherman on Hammond B3 organ and Lee Fish on drums, augmented (as on their recent live album) by rising-star vibraphonist Warren Wolf. Tucker, a tall tenor saxophonist in a black suit and tie, whipped the band through the first three tracks on that album-“The Sherminator,” Monk’s “Trinkle Tinkle,” and “Transform”-with his and Wolf’s playing being particularly impressive. The drums kicked off “Trinkle Tinkle,” with Tucker coming in sounding more modern and abstract than on the opener, before Wolf joined in taking Monk’s melody at a furious clip and they took turns soloing. On “Transform” Wolf took an even more blazing solo, which he kept under control while ignoring a tech guy adjusting his microphones mid-solo.

There was more to that set, but there was also another group with another ringer to catch at the opposite end of the festival: 21-year-old pianist Matt Savage’s quartet with alto sax veteran Bobby Watson. Savage seemed to split his time between piano and a Fender Rhodes, playing the latter on his tune “Power Pop,” which Watson sat out. But the saxophonist returned to the stage for a couple of additional pieces, closing the set with a ballad and a brisk run-through of “Cherokee.”

There was time for a quick stop at the Natixis stage, where Meshell Ndegeocello played a set mixing vocals and occasional turns on electric bass and hitting a few tunes from her recent Nina Simone tribute album, Pour une ȃme souveraine, starting with “one of my favorites,” the Leonard Cohen-penned “Suzanne.” Julian Lage was spotted watching a couple of former students in her band and scanning the crowd for Sanchez, who was likewise making a busman’s holiday of the afternoon’s offerings before their sets back at Scullers that night.

The Will Calhoun Trio was the surprise of the festival. Best known for his work on drums with the rock band Living Colour, Calhoun returned to his jazz roots on his recent album Life in this World, and it was that sort of material he was joined for on the Aramark/Coca-Cola stage by pianist Marc Cary and bassist Charnett Moffett. They kicked off their set, as Burton’s group had the night before, with a version of “Afro Blue,” and kept things burning throughout, concluding with an especially rousing piece that incorporated synthesized drumbeats from the leader. Cary, whose fine new album For the Love of Abbey celebrates his longtime employer Abbey Lincoln, excelled on both piano and the Fender Rhodes, sometimes simultaneously; Moffett, whose album of solo bass works The Bridge also came out this past spring, was perhaps even more dazzling when he switched to electric bass from his upright for solos, which is saying a lot.

A band lesser than Christian Scott’s might have been intimidated by the Calhoun set. But Scott’s quintet proved more than up to the challenge of following it. The leader alternated stalking the stage throwing out directions and encouragement to his sideman with powerful, well-thought-out solos. Matthews Stevens, Scott’s “partner in crime for over a decade” (including regular work at Wally’s in their Berklee student days), didn’t solo much beyond the set’s opener, but his rocking guitar riff made the set’s second piece and brought to mind the heyday of jazz-rock fusion. Lawrence Fields began that tune on Fender Rhodes, reverting to piano for his solo, which was followed by solos by Kris Funn on upright bass and Corey Fonville on drums. Scott played a ballad for his new wife on flugelhorn next, the custom-made horn as unique in its design as the trumpet with the built-in mouthpiece and Dizzy Gillespie-style upraised bell he spent the rest of the set playing. Fields’ piano solo on the ballad, incidentally, was as impressive as his boss’s on flugelhorn. Scott ended the set with his controversially titled tune “K.K.P.D.,” explaining its reference to Scott having been bullied by a group of police officers in his hometown of New Orleans, in a harrowing confrontation that climaxed with one of them threatening Scott that if he didn’t shut up, his mother would be picking him up at the morgue. Scott’s soloing on this tune looked and sounded especially personal, as he bent this way and that, forcing bursts of air into his instrument and, apparently, reliving the incident as he played.

And with that, promptly at 6 o’clock, the festival was over. The Scott set had been too riveting to make the schlep back up Columbus Avenue to the Berklee stage for vocalist Robin McKelle and the Flytones, a pity considering the high quality of their new album, Soul Flower (which features a guest spot from Gregory Porter, who had appeared on The Tonight Show with Jay Leno the night before). Also missed at the Berklee stage on this impressionistic tour of the festival: the Berklee Global Jazz Ambassadors featuring Adam Cruz, the Bell Affair featuring Karen Bell and the Simon Moullier Quartet. At the Natixis stage: Berklee City Music All-Stars Big Band Jazz, Matt Jenson and the Liquid Revolution, Berklee P-Funk Ensemble and Lawrence “Larry” Watson and the Workforce. More music would follow Sunday night from the jazz-funk-world group Snarky Puppy at the Berklee Performance Center and on Monday from the rising eclectic jazz group Kneebody at Berklee’s club-sized 939 Cafe.

The 2022 Newport Jazz Festival’s three days of sunshine were bracketed, more or less, by a pair of all-star ensemble jams that included Christian McBride. … END_OF_DOCUMENT_TOKEN_TO_BE_REPLACED

In its first full edition since the onset of the pandemic, and with a new director of programming, the Festival International de Jazz de Montréal … END_OF_DOCUMENT_TOKEN_TO_BE_REPLACED

Among the many physical, spiritual, and institutional losses related to the still-ongoing pandemic is that of Los Angeles’ renowned Playboy Jazz Festival (PJF) at the … END_OF_DOCUMENT_TOKEN_TO_BE_REPLACED

It’s difficult to imagine what the stage and the audience would have looked like at Gaillard Center in Charleston, South Carolina, if Rhiannon Giddens’ new … END_OF_DOCUMENT_TOKEN_TO_BE_REPLACED