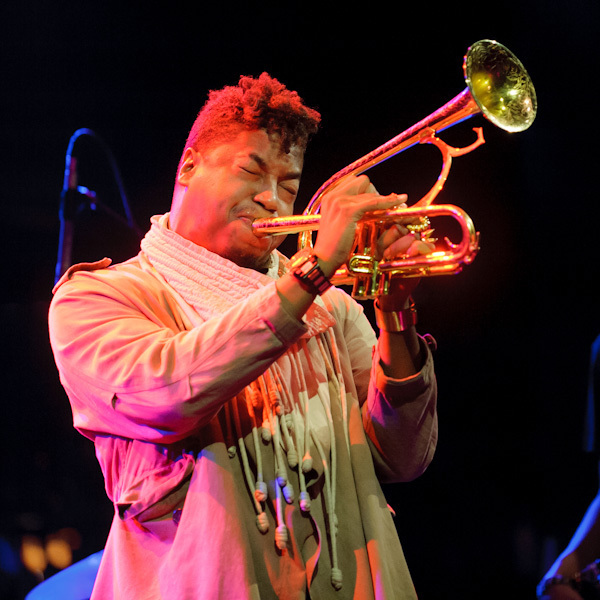 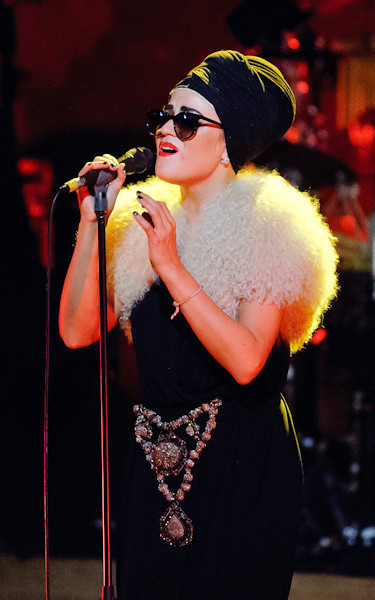 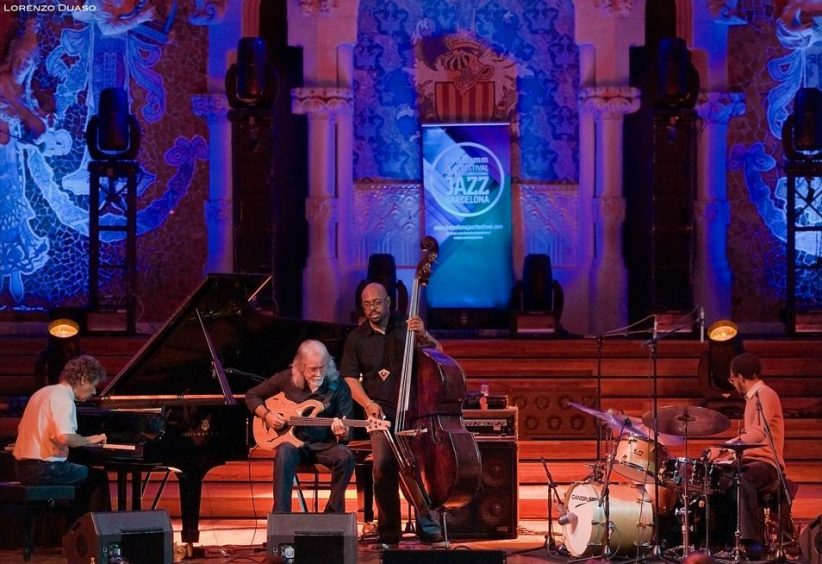 Mastering the necessary algorithms for a successful, annual jazz festival is tricky. Ask any producer. So much pulls in opposite directions, like the need to satisfy a core jazz audience while attracting more mainstream fans. Meeting an ever-fluctuating bottom line while maintaining a consistent musical vision. It was challenging enough when money was more plentiful. Things are increasingly difficult now-fewer jazz legends can pack a theater, and fewer corporate sponsors and public funding sources are able to lend support.

Not the best conditions for taking chances or innovation, which is the lifeblood of any festival. Today, the well-established ones (think New Orleans or Newport, Monterey or Montreux) keep to winning formulas; the headliners make perfect sense and are perfectly predictable. In places where economies are teetering, like Italy and Spain, other festivals rely on less major acts, get creative and soldier on.

I arrived in Barcelona just after Thanksgiving for the final week of the city’s long-running jazz festival. Its official title is the Voll-Damm Barcelona International Jazz Festival and is in its 44th edition (it was founded in 1966, when dictator Francisco Franco was still alive). Since late summer, knowing that I’d be going I couldn’t help but note the headlines that spoke of Spain’s ongoing financial crisis and, more recently, of a growing independence movement in Catalonia, where Barcelona is the capital. A regional election (or national, if you ask your average Catalan) was scheduled for the Sunday after I arrived, and that’s what most people were talking about.

You get the idea-the approach was more far-reaching and diverse than many other festivals, more even than past years in Barcelona. Credit largely is due to Joan Anton Cararach, who has diligently developed the festival over the past 10 years in his role as artistic director. Beside the benefit a catholic and informed musical taste (he visits the U.S. on the average of three times a year), he has a steady vision of that growth. If one word sums up what he has pursued and accomplished I think it would be integration-the idea of linking Barcelona to the global jazz community, and the notion of rooting the festival into all aspects of the city itself.

There was much that I saw and learned in my week that made this evident: well-attended master classes held at the Conservatori del Liceu (home to Barcelona’s leading collegiate-level jazz department) with Bob Belden and his new quintet Animation (Nov. 26) and with pianist Spike Wilner (Nov. 27), who owns and runs the Manhattan jazz club Smalls. In the auditorium of the city’s French Institute on Nov. 29, there was “L’Oeil de l’Éléphant” (“Eye of the elephant”), a captivating slideshow of black-and-white images shot by the legendary French photographer Guy Le Querrec, accompanied by an all-star French jazz group: reedmen Louis Sclavis, Michel Portal, bassist Henri Texier and drummer Christophe Marguet. (It was a simple, compelling idea, that was well-planned and professionally executed.) Two evenings-Nov. 28 and 30-there was a music/wine-tasting at the city’s renowned Monvínic restaurant: essentially a discussion of songs from the Great American Songbook, led by author/historian Will Friedwald, with each song matched to a carefully chosen vintage by the restaurant’s sommelier, Cèsar Cànovas (who had won Spain’s coveted Best Sommelier award just the previous week).

On paper, the advance description of this last event read like a quaint evening out. In actuality, with Friedwald’s wit and depth of knowledge guiding the way, it proved to be a fascinating stimulation of tongue and brain, a taste of what I imagine a salon gathering may have been in the past-say, Paris or Berlin in the ’20s, London in the ’60s-when intellectuals and enthusiasts met, drank and shared common cultural enthusiasms.

Admittedly, this kind of focus on integrating discussion and celebration into a music festival is nothing new, but the hands-on aspect in Barcelona was what really stood out. Cararach himself was at every event (it helps that there’s less simultaneous activity like the weekend-blowouts in Rotterdam or Montreal), overseeing, greeting, and, on two occasions, serving as onstage interviewer. Tito Ramoneda, president of The Project, the company that produces the annual event, presented an award to Chick Corea before he played the festival’s closing performance. It was a gesture driven by the type of sincerity that helps define a festival, and can help assure its continuation.

Speaking of performances, the highlights of that last week included:

• Francesco Bearzatti Tinissima Quartet (Nov. 24)-The instrumentation was plugged-in saxophone, trumpet, electric bass, drums and effects. The concept was “Monk & Roll,” mash-ups of Monk melodies with classic rock and pop themes of renown. “Bye Ya” with Pink Floyd’s “Money,” “In Walked Bud” with Michael Jackson’s “Billie Jean.” “Brilliant Corners” with Queen’s “Under Pressure.” “‘Round Midnight” with the Police’s “Walking On The Moon.” Some tunes meshed better than others, but as a whole it worked, less because of the melodic mechanics involved (though they did make that part work pretty seamlessly-“Blue Monk” with the Knack’s “My Sharona”!) but more because saxophonist Bearzatti, and especially trumpeter Giovanni Falzone, delivered the right mix of attitude, swagger and fun.

• Christian (Scott) aTunde Adjuah (Nov. 25)-Christian has a new quintet-pianist Lawrence Fields is the sole holdout from recent lineups; more than his name change, and perhaps more than his repertoire, this personnel shift seemed most responsible for making the music as exciting as it was at the club Luz de Gas (with its Berlin 1920s feel-half theater/half cabaret-it’s one of my favorite Barcelona hangs). Scott’s new lineup-alto saxophonist Braxton Cook (still at Juilliard!), bassist Lucques Curtis (his old Berklee roommate) and drummer Corey Fonville-found fresh nooks and emotional twists in his latest set of tunes. The trumpeter has never shied away from musical daring, he deserves the right combination of talent to take those chances with him; this could be the crew.

• Bob Belden & Animation (Nov. 26)-The last time composer/bandleader/conceptualizer Belden stepped out, he was leading a Miles Davis tribute group. This time he was leading a (very) young quintet of University of North Texas jazz majors in a group he calls Animation; Belden himself on saxophones. As opposed to recent projects of his that carefully matched and re-crafted tunes for a larger ensemble, the prevailing idea now seems to be allowing this group to find into its own identity, working with Belden’s compositions and a few Miles themes borrowed from Bitches Brew. Even in this live and open-ended context, as an astute bandleader and chooser of talent, he proved his command of light, shade and harmonic subtlety.

• Fanfare Ciocarlia (Nov. 27)-If there was one thing I did not expect to see at this or any other jazz festival, it was a mosh pit. The word was out on this 12-piece, amped-up Romanian brass band: frontline was four trumpets and two alto saxes, behind them were four tubas, a snare and a bass drummer. With their 2-beat rhythms and exceedingly tight horn lines-even at “Cherokee” tempos-they attracted a young crowd that was ready to pogo, and they got what they came for. Think Dirty Dozen with higher octane and less syncopation, yet just as irrepressible and fun.

• Chick Corea Trio (Nov. 30)-He is one of the most consistently inventive pianists to this day-his seamless runs are filled with surprise and tact, his comping with rhythmic delight. Call it Precision Funk: with Christian McBride and Brian Blade, there was an accuracy and sustained flow of ideas that locked in with Corea’s prowess and elevated each selection-“Green Dolphin Street,” “Alice In Wonderland,” Corea’s modal “Pledge for Peace” and blues-like “Fingerprints” (his take on Shorter’s signature composition). The final encore brought the house down: what else could it be but “Spain”? Carles Benavent, who has toured and recorded with Corea in the past, sat in, adding an appropriate Iberian touch.

As mentioned, Corea’s concert was the festival’s closer, taking place in Barcelona’s world-famous Palau de la Música, with its surreal mosaics and psychedelic stained-glass ornamentations. As the last encore ended, I looked around and noticed a number of local gentry, visiting journalists and producers, and other cultural heavies in attendance-the director of Barcelona’s French Institute, the chair of the Conservatori’s jazz department, the head of The Project-all clustered together, discussing the music, smiling. That’s a healthy sign, I remember thinking. This is one festival that is doing it right.

(Oh, and the election. The voting resulted in a stalemate for the leading political party with little real change to the conditions at hand. While the economic situation lingers, the chances of a Catalonian secession appears as unlikely as it was before.)

Among the many physical, spiritual, and institutional losses related to the still-ongoing pandemic is that of Los Angeles’ renowned Playboy Jazz Festival (PJF) at the … END_OF_DOCUMENT_TOKEN_TO_BE_REPLACED

It’s difficult to imagine what the stage and the audience would have looked like at Gaillard Center in Charleston, South Carolina, if Rhiannon Giddens’ new … END_OF_DOCUMENT_TOKEN_TO_BE_REPLACED

“It’s time to imagine a place where we can come together,” Danilo Pérez said from the hallowed stage of Washington, D.C.’s historic Sixth & I … END_OF_DOCUMENT_TOKEN_TO_BE_REPLACED

At the Zeiders American Dream Theater in Virginia Beach, Va., between April 8 and 10, the Vocal Jazz Summit convened in person for the first … END_OF_DOCUMENT_TOKEN_TO_BE_REPLACED