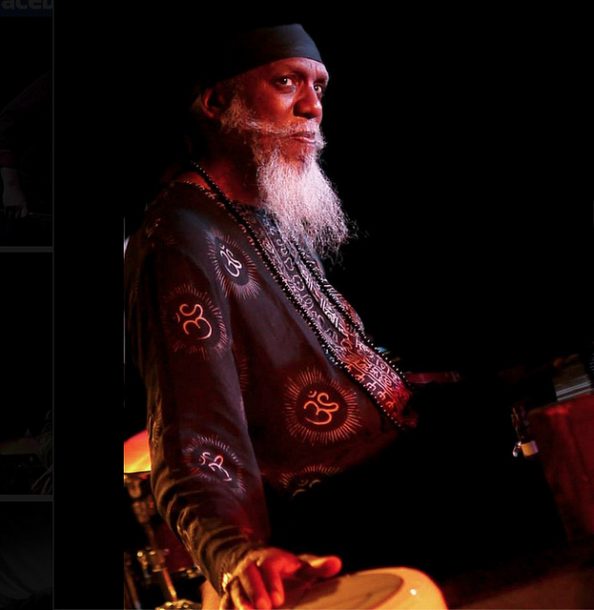 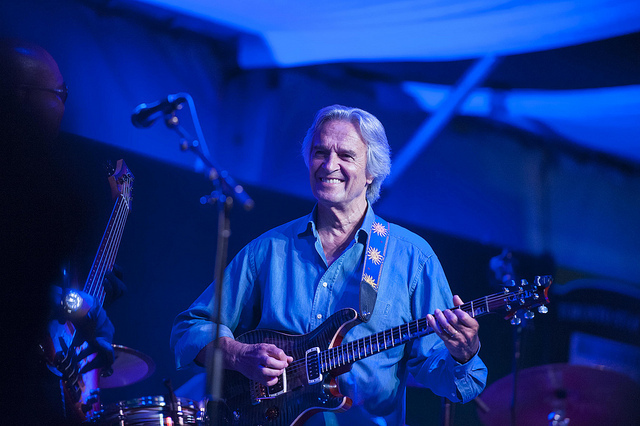 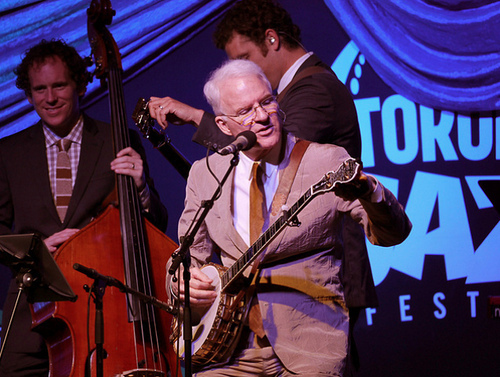 How much jazz must a jazz fest have for a jazz fest to be legit? It’s a question that has, of late, been burning with increasing intensity, and was a hot topic of discussion as the 27th annual TD Toronto Jazz Festival unfolded at the end of June. The Toronto fest is hardly alone in programming acts that blur, or sometimes completely avert, jazz lines. Indeed no major fest-not Montreux (where Prince and ZZ Top were prominent this past April), nor Montreal (with Serena Ryder and She and Him in this year’s mix)-is exempt from the discussion. But Toronto seemed guiltier than most, particularly with its grand (and free) opening night ceded entirely to Smokey Robinson and Martha Reeves, neither of whom would likely know “Take Five” from “Takin’ It to the Streets.”

The argument is that quasi- or non-jazz names are necessary to build a broader audience. A broader audience means more money flowing in, money that can be spent on deserving jazz artists with smaller followings. There’s also the debatable posit that marquee names like Robinson (or Sharon Jones, or Willie Nelson or, this year’s most egregious example, the creaky Canadian pop outfit Lighthouse) attract crowds that are then enticed to attend other, more jazz-centric, performances. Still, it’s difficult to imagine an R&B festival opening with Diana Krall or a major country music jamboree shelling out for Jamie Cullum simply because they’re guaranteed seat fillers.

Yet despite the encroaching pop (and soul), Toronto’s 27th fest was, from a pure jazz perspective, the best the city has shaped in at least a decade. Among the several-dozen acts included in the 10-day schedule (which is also the unfortunate victim of cultural overcrowding, squeezed between the city’s massive, multi-discipline Luminato Festival and one of the biggest and most boisterous Pride weekends on the continent) were Bill Charlap, Dr. Lonnie Smith, John McLaughlin, Bob James, Davis Sanborn, Fred Hersch, Gregory Porter, Eliane Elias, Robert Glasper, Jason Moran, Trombone Shorty, Ranee Lee and Roberta Gambarini. Delivering so rich, and so richly diverse, a roster of true jazz talent, artistic director Josh Grossman is deserving of far more bouquets than brickbats.

Now, since it’s impossible to see and hear everything, a highly subjective list of highs and lows:

The venerable Horseshoe Tavern, where Etta James, the Police, Talking Heads and the Rolling Stones (who chose it as the ignition site for their 1997 Bridges to Babylon tour) have all held forth, isn’t generally known as a jazz house, but served up the festival’s most sizzling late-night lineup, shaping a three-night salute to champions of the avant-garde, with Dr. Lonnie Smith, then the Robert Glasper Experiment, then Jason Moran hosting a Fats Waller Dance Party featuring Meshell Ndegeocello. All were deservedly packed to the rafters.

Emerging on the site of the late, lamented Top of the Senator, once upon a time the city’s finest, and most intimate, jazz room, the new, two-tiered Jazz Bistro is a welcome addition to the increasingly parched Toronto scene, particularly with Sybil Walker reprising her role as programmer and GM. Exercising her exquisite taste, Walker filled the room with an A-plus roster of vocalists, including Molly Johnson, Ranee Lee, Carmen Souza and Roberta Gambarini, but reserved one night for magical sets of solo piano from Bill Charlap.

Noon on the Pure Spirits Patio with vocalist Ori Dagan, the Swing Shift Big Band at 3:30 at the Rex, Mavis Staples and Dr. John on the Mainstage at 8, then Molly Johnson’s second set at the Jazz Bistro.

Monday, June 24: Fred Hersch solo at the lakeside Enwave Theatre versus Charlap solo at the Jazz Bistro. Of course, you could catch Hersch and then head downtown for Charlap’s late show, but that meant missing Smith at the Horseshoe.

Eliane Elias delivered a solid, opening-weekend show at the Old Mill Inn, focusing squarely on selections from I Thought About You, her recent Chet Baker tribute. But it was the dynamic opening duo of pianist and composer Bernie Senensky and flutist Bill McBirnie that, battling a cacophony of cutlery, truly set the expansive dining room aflame and, ironically, provided far more satisfying dips into the Brazilian songbook. (For the uninitiated, check out their 2005 pairing on Paco Paco).

Boz Scaggs hit all the right notes with a stellar Friday night set that emphasized his postmillennial rebirth as a top-drawer interpreter of jazz standards while also drawing heavily from his recent soul-country-jazz sojourn through Memphis, yet still found time to include such throwback crowd-pleasers as “Lido Shuffle” and “Lowdown.” Everybody went home happy.

Steve Martin and Edie Brickell, whose Love Has Come for You album is earning justifiable raves, came a close second with a closing-night sashay along the jazz-bluegrass border that was as witty and wise as it was musically fulfilling.

Most Unexpected (and Worst) Crossover

Who knew that Nikki Yanofsky, already a festival stalwart at age 19, would return to the acoustically sublime Koerner Hall to serve up a platter of pop dreck? Likely not festival organizers, nor the far-less-than-capacity crowd, many a septuagenarian among them, all of whom were surely expecting the young Montrealer to continue her exploration of Ella-blessed tunes. Though she looked every inch the jazz siren, sporting a skintight dress that might make Rita Hayworth blush, Yanofsky’s mind was on a batch of jejune originals that will fill her forthcoming album, Little Secret, all sung a little too loud. Mid-concert she announced, without an ounce of seeming irony, that her professional goal is “to bring jazz to my generation.” Admittedly, there were a couple of genuinely jazz-infused moments, including a coquettish “You Won’t Be Satisfied” and a sultry “Witchcraft” that seemed a perfect match for the dress. But it was too little, too late. Yanofsky’s new direction might net her Bieber-sized success, and more power to her if that’s her fresh intent. But it was tremendously disappointing to hear the gifted lass who once voiced aspirations to follow in Ella and Sarah’s footsteps instead going the way of Selena Gomez.

No debate: Gregory Porter. The self-effacing charmer is a great singer and a terrific songwriter. By now, everybody knows that. The surprise is that he’s also a remarkable showman: a born raconteur who’s as funny as he is insightful. Despite the scorching heat, Porter arrived onstage in his signature headgear, complete with earflaps, and proceeded to blow the capacity crowd away with a 90-minute mix of standards and originals drawn from his first two albums-Water and Be Good-and his forthcoming Blue Note debut, Liquid Spirit (due in September). Wielding an imaginary sword he executed a delightful thrust-and-parry shuffle, explaining that he was “smiting the demons that fight against love,” before launching into the warm, tender “No Love Dying” from the new album. Later, he paused between numbers to playfully announce, “We’re going to continue forward with, um, … whatever I like!” What he liked was a cashmere-soft “When Did You Learn” (from Be Good), a blistering “Work Song,” (one of several opportunities to showcase brilliantly imaginative alto saxophonist Yosuke Sato) and a seismic rendering of the anthemic rallying cry “1960 What?” (from Water). Simply put, musical evenings (of any stripe or genre) don’t get any better than this.

It’s difficult to imagine what the stage and the audience would have looked like at Gaillard Center in Charleston, South Carolina, if Rhiannon Giddens’ new … END_OF_DOCUMENT_TOKEN_TO_BE_REPLACED

“It’s time to imagine a place where we can come together,” Danilo Pérez said from the hallowed stage of Washington, D.C.’s historic Sixth & I … END_OF_DOCUMENT_TOKEN_TO_BE_REPLACED

At the Zeiders American Dream Theater in Virginia Beach, Va., between April 8 and 10, the Vocal Jazz Summit convened in person for the first … END_OF_DOCUMENT_TOKEN_TO_BE_REPLACED

The Big Ears Festival returned to Knoxville in a big way in late March, drawing an estimated 30,000 music enthusiasts from across the U.S. and … END_OF_DOCUMENT_TOKEN_TO_BE_REPLACED