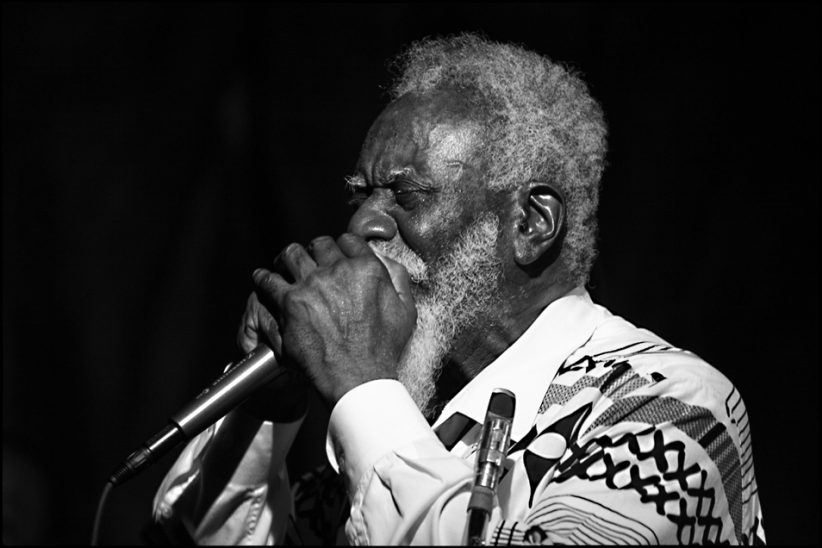 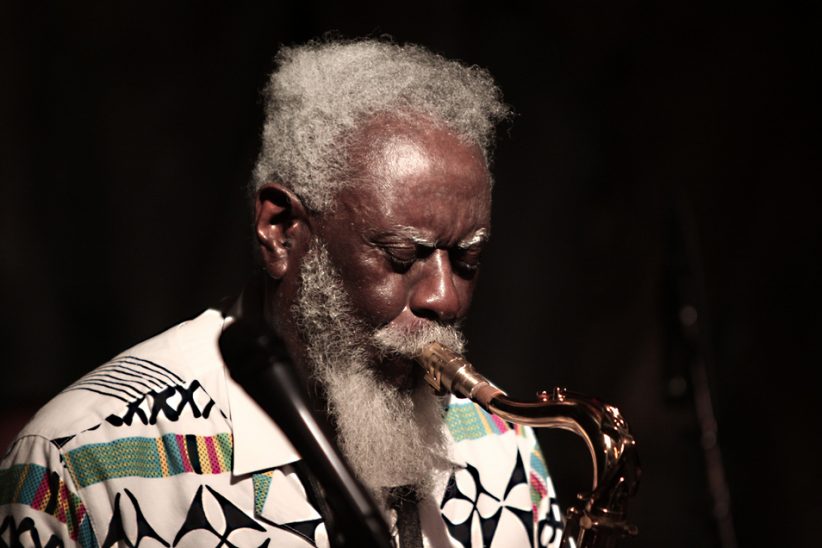 Pharoah Sanders has not unfairly earned the reputation of an esoteric, challenging musician, taking all of the complexity of his mentor John Coltrane’s music and adding the heavy use of overblowing and harmonics to the mix. Yet while he has gained this reputation with his intense and relentless recordings, Sanders’s spirited live shows have found him a dedicated audience that delights in both his engaging persona and brilliant saxophone work.

Sanders performed six shows over three nights at Washington’s Bohemian Caverns as part of the 2013 DC Jazz Festival. Each of the six shows sold out well in advance, and tickets to see the legend became one of the hottest commodities of the festival.

In the second set of his Friday, June 14th show, Sanders and his quartet started off slow with a favorite of Sanders, the standard “My Favorite Things” as performed by Coltrane. As Coltrane did, Sanders used a repetitive two-chord vamp to employ his brand of free jazz, blowing long and complicated yet melodically engaging lines. Sanders’ playing has become more sparse with age, but instead of leading to a decrease in quality, the reduction in the number of notes played gives the notes played greater weight.

The first couple of numbers dragged on for too long, and just as Sanders was in danger of lulling an overheated audience to sleep, he blasted the audience with the screaming siren opening notes of the Sanders classic “You’ve Got to Have Freedom.” The forcefulness in Sanders’ blowing has not decreased in the least over time, and I’m not sure I’ve ever heard a louder saxophone than Sanders’ on the opening notes of the tune. Seemingly energized by the audience’s sudden enthusiasm, Sanders acknowledged the crowd for the first time and began to dance and engage in call-and-response during breaks from his playing.

Though his talent has not decreased with age-Sanders is 72 years old-his stamina has waned. After extended sessions of dancing, screaming into the bell of his saxophone, using the keys of his horn as percussion, and of course blowing through sheets of sound, Sanders would retire to his stool for a rest, leaving his band to play for extended periods without the headliner. Sanders is able to do this due to the high level of musicianship in his band, with particular credit going to the outstanding William Henderson, Sanders’ longtime pianist. Henderson employs big, rich block chords and precise melodic lines in his soloing, providing the driving swing that grounds Sanders’ playing.

The well-meaning but lyrically insipid “Save Our Children,” featuring the repeated verse “Now’s the moment/For salvation/All we need is/Inspiration” dragged on endlessly, though Sanders’ genuine earnestness in his vocal delivery gave the lyrics far more weight than they deserve. After finishing his set, the crowd, egged on by the club’s managing partner Omrao Brown, called for an encore. Though Sanders was clearly exhausted, he gamely gave the audience what they wanted.

Though Sanders has settled into a groove of playing the same songs he has performed for decades, he is still very much a vibrant and compelling musician as well as performer, capable of short but stunning bursts of brilliance.

Among the many physical, spiritual, and institutional losses related to the still-ongoing pandemic is that of Los Angeles’ renowned Playboy Jazz Festival (PJF) at the … END_OF_DOCUMENT_TOKEN_TO_BE_REPLACED

It’s difficult to imagine what the stage and the audience would have looked like at Gaillard Center in Charleston, South Carolina, if Rhiannon Giddens’ new … END_OF_DOCUMENT_TOKEN_TO_BE_REPLACED

“It’s time to imagine a place where we can come together,” Danilo Pérez said from the hallowed stage of Washington, D.C.’s historic Sixth & I … END_OF_DOCUMENT_TOKEN_TO_BE_REPLACED

At the Zeiders American Dream Theater in Virginia Beach, Va., between April 8 and 10, the Vocal Jazz Summit convened in person for the first … END_OF_DOCUMENT_TOKEN_TO_BE_REPLACED