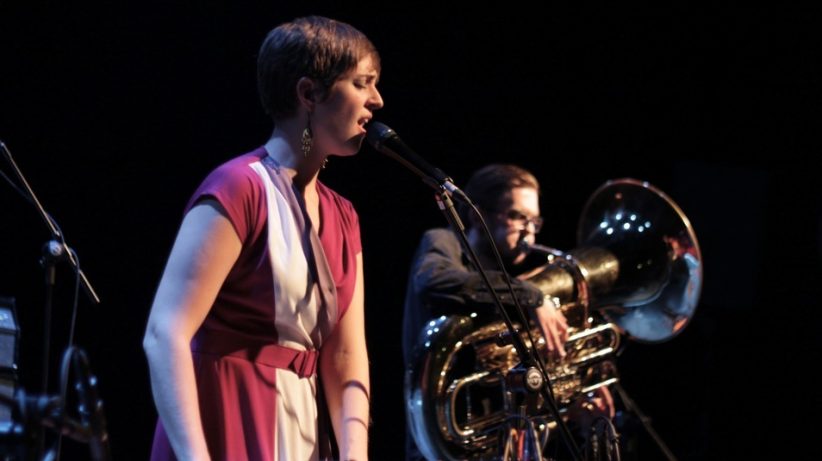 As the festival neared its finish this weekend, the Norwegian trio PELbO ended their own five-week tour – their first in the UK – with a performance at London’s Kings Place. Not to be fazed by unfamiliar territory, the young group put together a thrilling set that was a testament to both Cumming’s keen eye for diverse talent and their own fresh approach to electro-tinged pop and contemporary improvisation.

Led by vocalist Ine Kristine Hoem, whose quiet intensity was noticeable the moment she walked onstage to check her mic and laptop, PELbO opened the evening with the lush, ethereal beat of “Can I Ask You” (from their new album, Days of Transcendence). It was a sound that probably shocked those in the audience who thought they’d come to see a more traditional jazz trio – but its hook-laced melodies and permeating warmth proved to be just as engaging as any jam session.

Along with Hoem’s intuitive and soulful style, Kristoffer Lo’s tuba is vital to PELbO’s unconventionally attractive presence. Wielding the potentially awkward horn more like a guitar hero than a low brass player, Lo used an array of effects and looping pedals to achieve really striking sounds that ranged from tight bass tones to surreal, psychedelic phase shifts. His ability to create, with such a difficult solo instrument, those unpredictable harmonic layers – while perfectly complementing Hoem’s vocals – is nothing short of brilliant.

But Lo didn’t provide that musical backbone singlehandedly, finding great rhythmic support in drummer Trond Bersu. Though not usually in the foreground, Bersu’s skillful touch and no-frills energy built the foundation for both intellectually fresh and euphorically danceable grooves.

While the sensitive, electro-fusion flavor of their improvised breakdowns adds much to the trio’s surprisingly huge sound – and allows them to fit in comfortably at a jazz festival – unabashed, pop-influenced catchiness lies at the heart of PELbO’s music. “Captain of Glory,” the opening track on Days of Transcendence and a highlight of Saturday’s set, showed just how witty and fun a well-crafted chorus can be. Always leading the melodic charge, Hoem radiated that jubilant spirit every step of the way, with impassioned lyrical storytelling and her own well-placed electronic effects.

Without a proper introduction, it might be hard to believe that a relatively unknown group like this would be asked for an encore in their first appearance at, of all events, the London Jazz Festival. But as they came back onstage to perform “We Call This Ours,” the new album’s heart wrenching final track, PELbO seemed to feel right at home. They may be young enough to be the children – or grandchildren – of some of the festival’s top performers, but the Norwegian trio has proven that they deserve a place alongside the biggest names in experimental music.

Among the many physical, spiritual, and institutional losses related to the still-ongoing pandemic is that of Los Angeles’ renowned Playboy Jazz Festival (PJF) at the … END_OF_DOCUMENT_TOKEN_TO_BE_REPLACED

It’s difficult to imagine what the stage and the audience would have looked like at Gaillard Center in Charleston, South Carolina, if Rhiannon Giddens’ new … END_OF_DOCUMENT_TOKEN_TO_BE_REPLACED

“It’s time to imagine a place where we can come together,” Danilo Pérez said from the hallowed stage of Washington, D.C.’s historic Sixth & I … END_OF_DOCUMENT_TOKEN_TO_BE_REPLACED

At the Zeiders American Dream Theater in Virginia Beach, Va., between April 8 and 10, the Vocal Jazz Summit convened in person for the first … END_OF_DOCUMENT_TOKEN_TO_BE_REPLACED