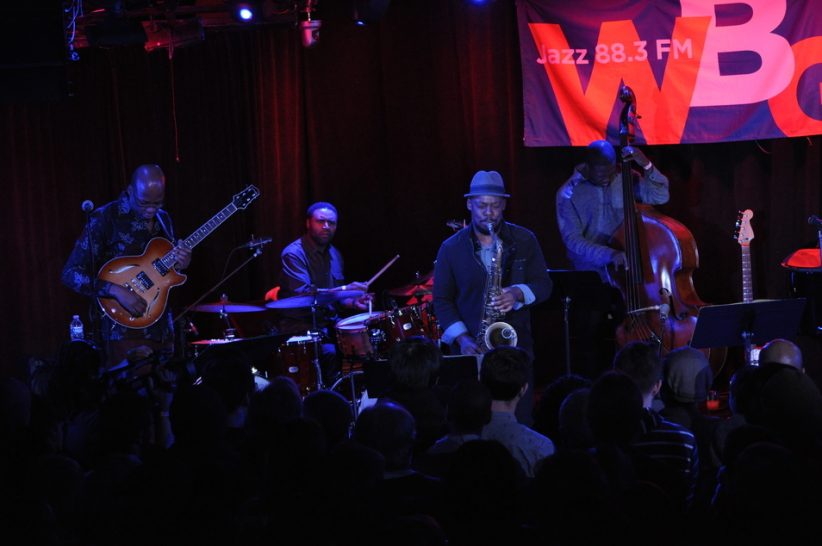 Lionel Loueke, Kendrick Scott, Marcus Strickland and Derrick Hodge (from left) perform at Le Poisson Rouge in December 2014 as part of Our Point of View 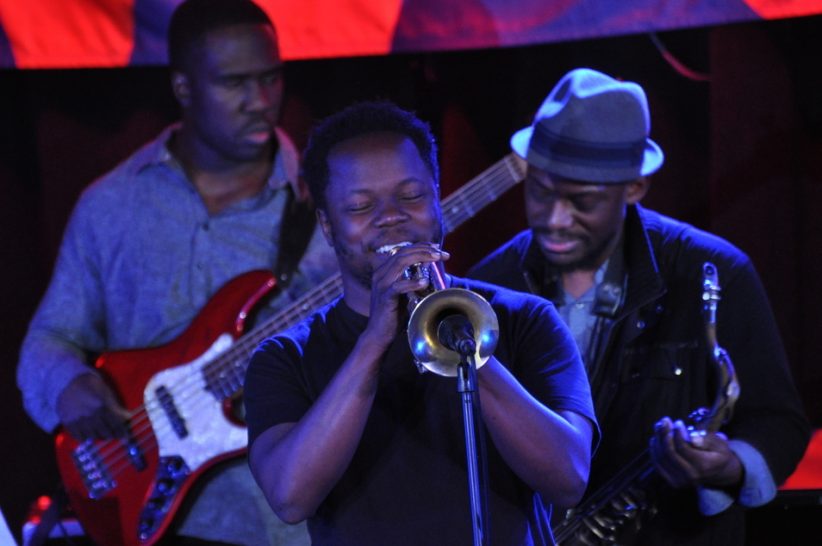 Derrick Hodge, Ambrose Akinmusire and Marcus Strickland (from left) perform at Le Poisson Rouge in December 2014 as part of Our Point of View 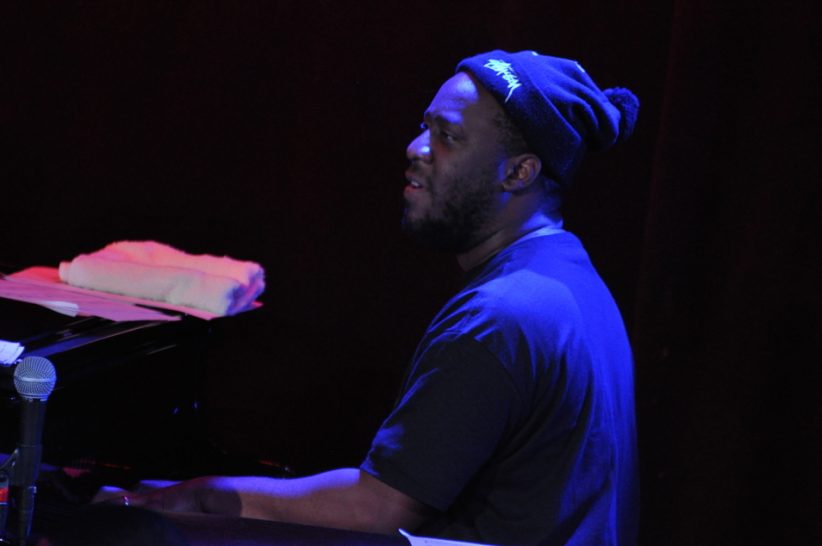 Our Point of View, a supergroup assembled to celebrate the 75th anniversary of Blue Note Records, played its fourth and presumably final show last Friday at Le Poisson Rouge in Greenwich Village, following concerts in Monterey, Paris and London. A sextet of youngish talents-trumpeter Ambrose Akinmusire, tenor saxophonist Marcus Strickland, guitarist Lionel Loueke, pianist Robert Glasper, bassist Derrick Hodge and drummer Kendrick Scott-Our Point of View located a sweet spot between a working group and a tribute band and stayed there for two engaging hours. Conceptual but not overly so, the concert-a benefit for WBGO-dodged the perils associated with all-star engagements. Most of what you might have been wary of, this night wasn’t.

Which is to say: 1) a blowing session, and 2) an earnest attempt to modernize Blue Note standards for The Young People. Instead, the gig focused on recent original music, most of it released by the label. The sole catalog pick, Wayne Shorter’s “Witch Hunt,” from 1966, came off like an announcement of birthright rather than a concession to an anniversary. Neither too standard nor too obscure, it was given a masterful but relatively straight read at the top of the program, entrenching the musicians in the tradition and flaunting their postbop bona fides from the get-go.

The set was egalitarian in design, featuring one composition apiece from the players (with unaccompanied intro) and spreading the spotlight around generously during the performances. Blue Note’s current program has much to do with the intersections of jazz and hip-hop and neo-soul, but despite those streaks this was a modern jazz gig. Glasper stuck primarily with grand piano, where his influences, from Hancock and Powell to Mulgrew Miller, could be heard as clearly as they were five to 10 years ago, when he was the architect of a fine and new piano-trio concept. His inventive moves as a soloist could astound, such as when he turned an Afro-Cuban riff into something resembling minimalism, or when an intro imagined solo Monk deconstructed by a turntablist. Ditto Kendrick Scott, whose spot on Akinmusire’s “Henya” created surplus excitement well before he touched a cymbal. (Scott is slated to release an album on Blue Note in 2015.)

Marcus Strickland, who has recorded for Blue Note as a sideman but not a leader, felt like the group’s legacy player, in the Joe Henderson way he consistently generated smart, hearty and entertaining solos regardless of the harmonic terrain. Loueke, with his electronics and subversive take on jazz-guitar function, came across as the most modern voice. His comping relied on fidgety staccato rhythm more than chord substitution, and his solos often took on organ and synth timbres, with an octave sometimes thrown in electronically. Prior to his “Freedom Dance” he delivered one of his crowd-pleasing (and inevitable) unaccompanied flights. Here, his escalating combination of muted, fingerstyle funk riffing and click-language beatboxing carried the audience from receptive to riotous.

Akinmusire’s intro to “Henya,” with its blend of slippery vocal smears, intervallic leaps and startling exclamations, cut the Friday-night atmosphere to make way for solemn focus, as did Derrick Hodge’s gorgeous, guitar-like epigraph for his “Message of Hope,” one of the best and most memorable compositions. Hodge is a gifted melodist, and his contribution evoked the bittersweet sparkle of both Afropop and Celtic folk. It wasn’t the sort of sound we associate with Blue Note historically, other than the fact that it was very, very good.

It’s difficult to imagine what the stage and the audience would have looked like at Gaillard Center in Charleston, South Carolina, if Rhiannon Giddens’ new … END_OF_DOCUMENT_TOKEN_TO_BE_REPLACED

“It’s time to imagine a place where we can come together,” Danilo Pérez said from the hallowed stage of Washington, D.C.’s historic Sixth & I … END_OF_DOCUMENT_TOKEN_TO_BE_REPLACED

At the Zeiders American Dream Theater in Virginia Beach, Va., between April 8 and 10, the Vocal Jazz Summit convened in person for the first … END_OF_DOCUMENT_TOKEN_TO_BE_REPLACED

The Big Ears Festival returned to Knoxville in a big way in late March, drawing an estimated 30,000 music enthusiasts from across the U.S. and … END_OF_DOCUMENT_TOKEN_TO_BE_REPLACED