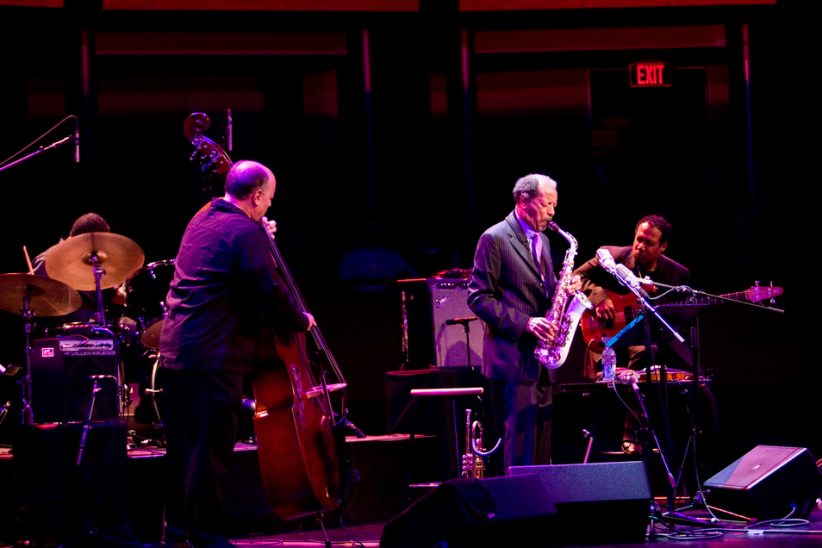 Considering how Ornette Coleman was so ardently dismissed by some critics and colleagues when he arrived in New York 50 years ago, it must’ve been extremely gratifying for the 79-year-old jazz revolutionary to receive a hero’s welcome upon entering the spacious, sold-out Rose Theater for his Jazz at Lincoln Center debut. With his son Denardo on drums, Tony Falanga on upright bass and Al MacDowell on electric piccolo bass, the Ornette Coleman Quartet exhibited rare chemistry in a 90-minute set that ran the spectrum from Ornette classics like “Peace,” “Lonely Woman” and “Turnaround” to the anthemic “Dancing in Your Head” and newer material like “City Living” (from 1996’s Sound Museum: Three Women) and “Sleep Talking” (from 2006’s Sound Grammar).

Though his slow walk during his dramatic entrance was noticeably labored, Coleman continues to play with the same pungent tones, incredible fluidity and remarkable vocalizations that have marked his career since his early days in Los Angeles. They opened in kinetic fashion with a new Coleman composition, “Following the Sound,” which was fueled by Denardo’s fast-paced backbeat and underscored by MacDowell’s sophisticated fingerstyle chording and arpeggiating on piccolo bass (an electric four-stringed instrument that has roughly the same range as the first four strings of a guitar). Ornette wafted over the pulsating groove with long keening tones on his white alto sax, blowing in halftime over the fray. He very quickly shifted from sax to violin (Jascha Heifetz he’s not) and then moved on to some arresting trumpet playing (as in, someone should arrest him for putting that horn near his mouth).

The poignant ballad “Sleep Talking” opened with Falanga’s beautiful bowed basslines over Denardo’s sensitive rubato pulse on the kit. With MacDowell once again arpeggiating-in this band he comps pianistically behind Ornette, or shadows him with single-note lines and doubles the leader with tight unison lines, à la Don Cherry-Ornette entered the subdued proceedings with his bracing alto sax voice, perhaps one of the most recognizable in all of jazz today. On a rendition of the uptempo swinger “Blues Connotation,” Falanga provided the surging momentum with his insistent walking basslines on upright while MacDowell chorded and Ornette wailed.

A word here about Denardo’s drumming: Granted, he’s no Billy Higgins or Ed Blackwell in the swing department, but Denardo does bring an edge to this band with his idiosyncratic time feel and unpredictable bass drum accents. And he does have the ability to propel the quartet with raw rock power, as on more visceral, slamming numbers like “In All Languages” and the frenetic “City Living,” or the new “9/11,” which Denardo fueled with a heavy, John Bonham-esque groove. Neither Higgins nor Blackwell can do that.

On an exhilarating rendition of “The Sphinx,” the two bassists combined to create the forward momentum of a runaway train. Denardo kept the train on the tracks with his own swinging pulse as Ornette soared over the top in his inimitable fashion, summoning up his Texas roots with wailing blue notes. The new “Taking the Cure,” a racing number that seemed to speed up as the piece developed, was highlighted by the close interaction among Falanga’s bowed bass, MacDowell’s rapid single-note lines on the electric piccolo bass, and Denardo’s urgent free-jazz flurries. Following that frenetic romp, the quartet settled into a sublime rendition of “Peace,” a blast from the past that elicited audible sighs from old-school Ornette fans in the audience.

Another new number, “Out of Order,” was based on a descending chromatic theme played in crisp unisons by the whole band. Denardo played with a fierce attack on this edgy tune as Ornette remained the calm center in the midst of all the swirling energy, like the eye of the hurricane.

Falanga’s flawless arco work on the upright was showcased on a beautiful solo rendition of a Bach suite, which gradually developed into another vehicle for Ornette’s freewheeling improvisations, fueled by Denardo’s heavy-footed, Ginger Baker-styled backbeats. “City Living” had a jaunty head that was catchy enough to be a ringtone, while their rendition of “Turnaround” had the relaxed vibe of an after-hours blues jam (with Ornette incorporating a riff from Rodgers & Hammerstein’s “If I Loved You” into the fabric of the piece). Denardo alternately held an understated shuffle here and erupted into drumming flurries that sounded like his kit was falling down the stairs.

They finished their set with rocking renditions of “Dancing in Your Head” and “Song X” before returning for an encore of “Lonely Woman,” a haunting and enduring melody that stands as Ornette’s answer to Monk’s “‘Round Midnight.”

Six years ago, at an opening reception for Harmolodic Studios on 125th Street in Harlem, Ornette debuted his trio with Denardo on drums and Tony Falanga on bass. Shortly after, Greg Cohen was added as a second bassist to make the group a quartet. MacDowell, a member of Ornette’s Prime Time band of the late ’80s, would later replace Cohen, and then a third bassist, Charnett Moffett, was added on upright (with distortion and wah-wah pedal) to make the quartet a quintet. The band has since been scaled back to a quartet, and now the roles are so well delineated that this current edition of the Ornette Coleman Quartet operates like a well-oiled machine.

“It’s time to imagine a place where we can come together,” Danilo Pérez said from the hallowed stage of Washington, D.C.’s historic Sixth & I … END_OF_DOCUMENT_TOKEN_TO_BE_REPLACED

At the Zeiders American Dream Theater in Virginia Beach, Va., between April 8 and 10, the Vocal Jazz Summit convened in person for the first … END_OF_DOCUMENT_TOKEN_TO_BE_REPLACED

The Big Ears Festival returned to Knoxville in a big way in late March, drawing an estimated 30,000 music enthusiasts from across the U.S. and … END_OF_DOCUMENT_TOKEN_TO_BE_REPLACED

Let’s get this out of the way: The Savannah Music Festival is not a jazz festival. Held over the course of 17 days in late … END_OF_DOCUMENT_TOKEN_TO_BE_REPLACED