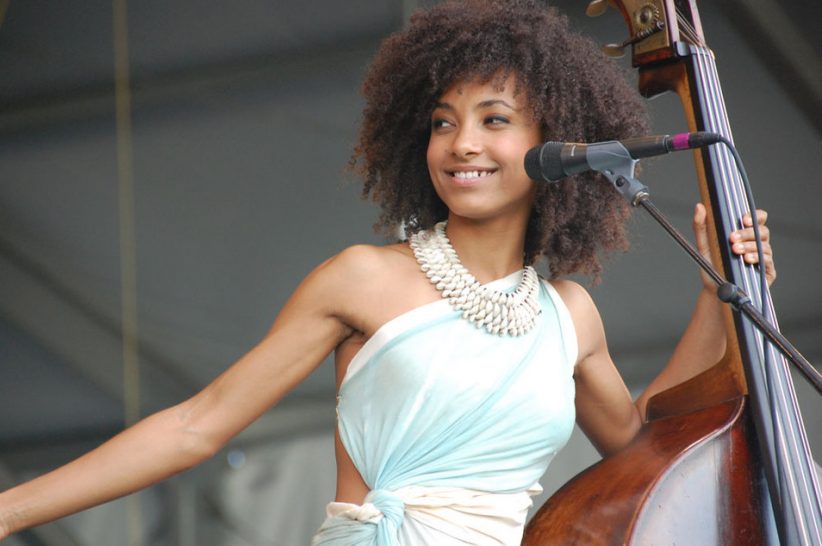 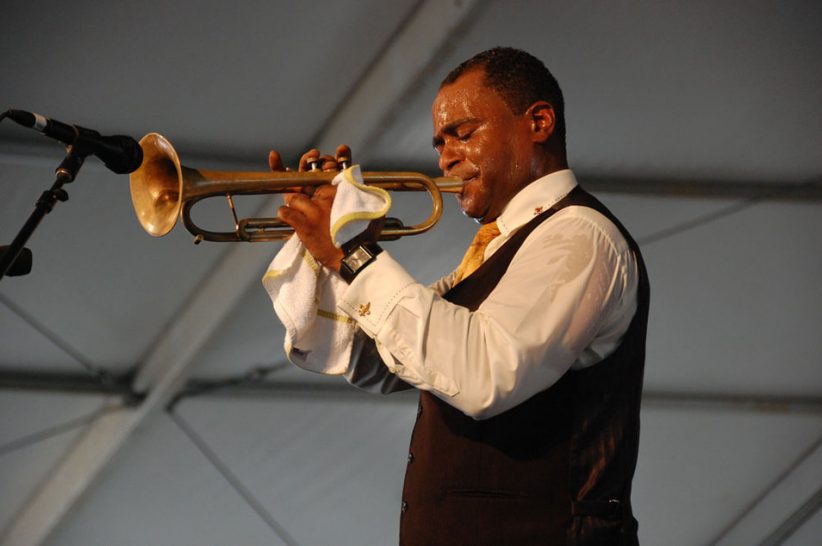 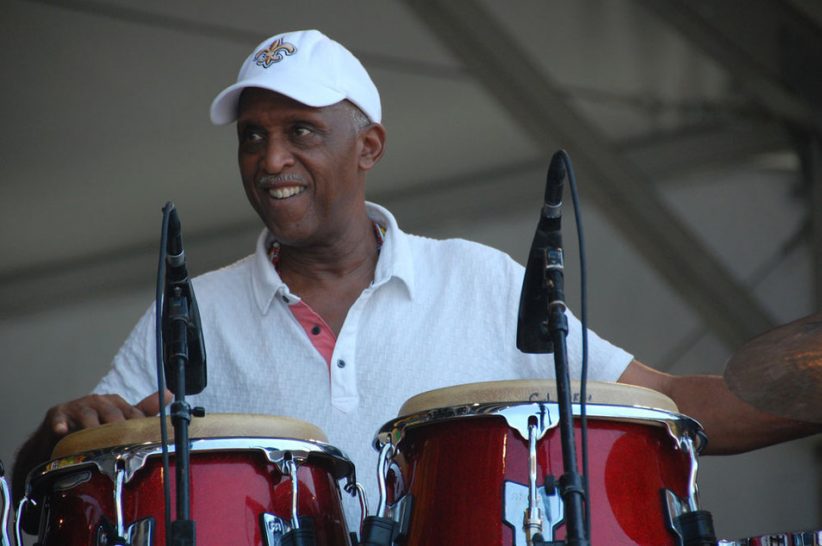 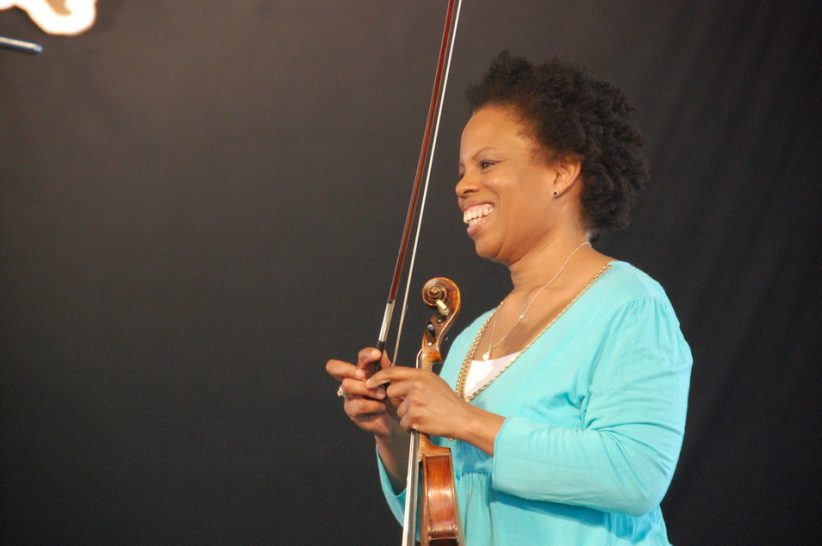 I’ve been attending Jazz Fest regularly for nearly 25 years and have been living in New Orleans for the past 15 years. For me, Jazz Fest is mainly about two things: hearing performances that are engaging and exuberant or, as Evan Haga put it in his review of Jazz Fest’s first weekend, cathartic; the other reason I go to Jazz Fest is to hear people I’ve never heard before.

My favorite day inside the Jazz Tent in recent years was Thursday, April 3. I caught two hometown acts still keeping the flames of hard-driving modern jazz alive in the Crescent City and experienced a brilliant national act. The latter was Regina Carter’s Reverse Thread, a project that brings together what might in other hands become a hokey collection of resources-lost Ugandan Jewish hymns and other obscure world musics, along with bass, drum kit, accordion and kora-for the purpose of sublime violin-led improvisations. Jazz Fest at large is a cornucopia of the Louisiana Gulf Coast’s unique and distinctive cultural traditions and predilections, many of them strongly African-tinged; Carter, in her sumptuous 90-minute afternoon set, managed to reproduce much of the whole of Jazz Fest in a detailed, intimate microcosm.

The aforementioned locals included trumpeter Marlon Jordan, performing with his quintet featuring longtime cohort Tim Warfield on sax. Driven by a piano/bass/drums rhythm section of younger local players, the quintet played neoclassical postbop without much need for explanation. The trumpeter is part of the New Orleans Jordan-family dynasty headed by patriarch and celebrated free-jazz saxophonist Edward “Kidd” Jordan, with siblings Stephanie, a swing-style vocalist, and Kent, a flutist and arranger. Criticized early in his career for mimicking ’50s-era Miles and not developing a unique voice, Jordan has in the intervening years come into his own as a player and bandleader. That the quintet could take on “Bye, Bye, Blackbird,” a ’50s Miles theme song, and never once make you think of the iconic trumpeter, was deeply impressive. Then it was out into the bright sunlight for a brief sojourn over to the main stage, where the Dirty Dozen Brass Band deployed a full complement of musicians, including both outgoing guitarist Jamie McLean and incoming keyboard player Kyle Roussel along with five original members-trumpeter Gregory Davis, trumpeter Efrem Towns, saxophonist Kevin Harris, saxophonist Roger Lewis, tuba guru Kirk Joseph-and drummer Terence Higgins, who’s been with the band now for more than a decade.

Of course, Jazz Fest isn’t immune to disappointment. Esperanza Spalding, who was scheduled for a 90-minute performance to close the day’s festivities at the Congo Square stage, was a letdown. I was anxious to see the next new thing in jazz, as were several hundred others who packed themselves in at the front of the outdoor stage. While Jazz Fest is a remarkably tightly scheduled production, occasionally there are backstage or technical problems that delay the start of a set. So it was with jazz’s next big thing, who first was a little late, then pretty late, and finally really, really late, floating out in a diaphanous dress a full 45 minutes into her time slot. When she said hello without apology or even mention of her extreme tardiness, I’d had enough.

Instead, I returned to where my previously glorious day had begun, the Jazz Tent, to hear Thursday’s closing set by Astral Project, a rare modern-jazz combo that New Orleans can call its very own, and has since 1978. In the beginning, Bobby McFerrin sang with them briefly, and when I encountered them in the 1990s, they were a full-blown quintet with New Orleans virtuoso pianist David Torkanowsky at the keys. Since the turn of the century, they’ve been a quartet led by tenor saxophonist Tony Dagradi and including guitarist Steve Masakowski, bassist James Singleton and drummer Johnny Vidacovich. What sets them apart as an ensemble is the relaxation in their sense of swing, the clear articulation and fluency of their compositions and improvisations, and their sense of near-telepathic interaction, especially during the solo sections. What’s truly amazing is that they maintain this rapport despite playing together as a group so infrequently.

At Jazz Fest, especially with good weather-and the second weekend was an exact copy of the first except with the heat turned up a few degrees-the crowds get bigger and bigger as the event moves along. By the second Saturday, the crowds were ginormous. Closing acts that day (all playing at approximately the same time) included the Eagles, My Morning Jacket, Ne-Yo, Warren Haynes and Dr. John (replacing the recently deceased Levon Helm), Herbie Hancock, and the Lost Bayou Ramblers. Only one performer I popped in on during that round of closing sets had almost no one listening to him: the truly excellent New Orleans trumpeter Leroy Jones playing in Economy Hall, a smaller tent located near the center of the festival grounds that’s programmed exclusively with traditional New Orleans jazz. Among the other Economy Hall higlights on Saturday was trumpeter Mark Braud, who led his own band through a totally satisfying set that featured one of my favorite components of the New Orleans tradition: the outrageously bawdy jazz ballad.

For most of the past year, Preservation Hall has been celebrating its 50th anniversary with a series of concerts, collaborations and exhibitions, including a guest-star-studded 50th anniversary concert in Carnegie Hall in January that will be released later this year on CD and DVD. The celebration also became a major element of the second weekend of this year’s Jazz Fest, with a colorful and extensive display in the Fest’s exhibition space and two bookings for the Hall’s main touring band, one on Saturday afternoon in Economy Hall and a second as the closing act on the event’s second-largest outdoor stage. (The Neville Brothers still retain pride of place as the closing act on the main stage.)

The band’s closing Jazz Fest performance featured Fest founding producer George Wein on piano; Trombone Shorty; the Rebirth Brass Band; composer/producer/pianist Allen Toussaint and Bonnie Raitt; folksters Ani DiFranco and Steve Earle; and in the set’s most stunning performance, My Morning Jacket frontman Jim James acting out a spooky and funereal “St. James Infirmary.” While he moaned the lyrics into a closely held microphone, James stalked the stage and slowed the beat to a nearly dead halt. It was one of those moments that inspire me to return to Jazz Fest year after year.

Among the many physical, spiritual, and institutional losses related to the still-ongoing pandemic is that of Los Angeles’ renowned Playboy Jazz Festival (PJF) at the … END_OF_DOCUMENT_TOKEN_TO_BE_REPLACED

It’s difficult to imagine what the stage and the audience would have looked like at Gaillard Center in Charleston, South Carolina, if Rhiannon Giddens’ new … END_OF_DOCUMENT_TOKEN_TO_BE_REPLACED

“It’s time to imagine a place where we can come together,” Danilo Pérez said from the hallowed stage of Washington, D.C.’s historic Sixth & I … END_OF_DOCUMENT_TOKEN_TO_BE_REPLACED

At the Zeiders American Dream Theater in Virginia Beach, Va., between April 8 and 10, the Vocal Jazz Summit convened in person for the first … END_OF_DOCUMENT_TOKEN_TO_BE_REPLACED