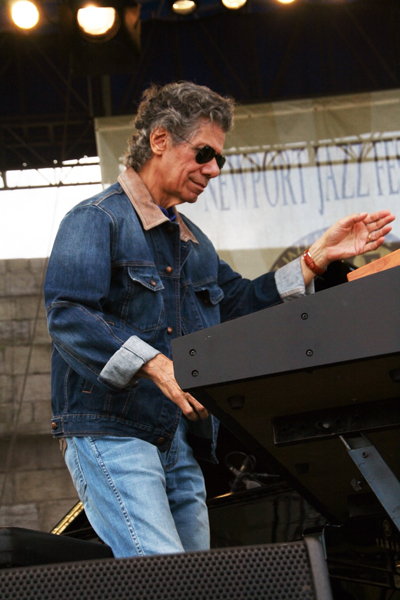 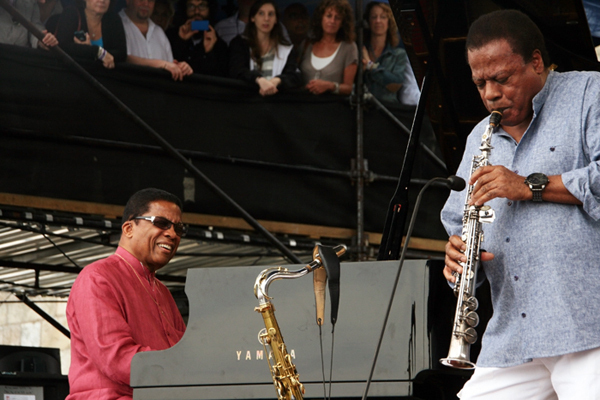 Herbie Hancock and Wayne Shorter at the 2013 Newport Jazz Festival 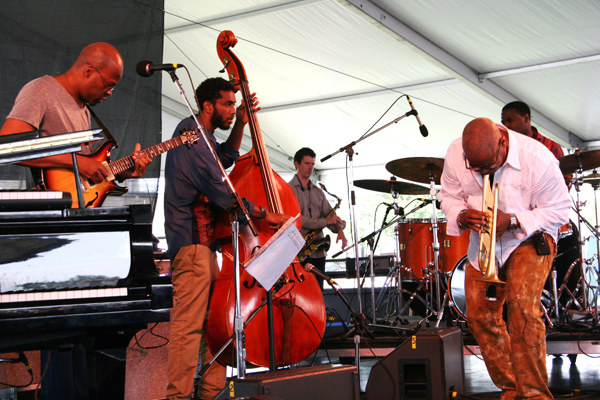 For the first half of day one at the 59th annual Newport Jazz Festival, you didn’t need sunglasses. An umbrella and a jacket would do you well against the drizzle that cast itself down in fits and starts, and the sharp breeze coming in off the cove. But then at some point the clouds parted, eyes flashed open, ears got comfy. You were at Newport all of a sudden.

It happened right around the time Herbie Hancock returned to the main stage to join Wayne Shorter for one final tune. He sat at the piano beside Danilo Pérez, the regular pianist in Shorter’s quartet, and the two locked into an exchange of mutual admiration, playful entanglement, and then finally a flash of splintered resolution. A few bars at a time, they took turns on what might be jazz’s most difficult and enriching duty: wrestling with the hard, beautiful magic of Shorter’s saxophone.

Shorter will celebrate 80 years this month, and his set was the day’s centerpiece. It started around 2 p.m., with a duet alongside Hancock that was soulful at turns (when Hancock led, for the most part), bleary and sharp at others (typically when Shorter did). About an hour of music followed, in which Shorter’s working quartet-a leonine band that has stuck together for 13 years, featuring Brian Blade on drums and John Patitucci on bass-let tunes lap over and about each other. It passed from a ruminative and porous reading of “Zero Gravity” to a muscly, hunkered-down version of “Orbits,” then into “Lotus,” a long suite that Shorter composed for a commission in 2010.

You didn’t even have to hear him play to celebrate Wayne Shorter at Newport this year. The first day worked as a tacit birthday party for jazz’s most eminent living composer, whose shadow falls on almost all realms of the music. As he performed, the Robert Glasper Experiment was playing on a slightly smaller stage, venturing into a freely unfolding medley of Shorter tunes (“Fall” into “Speak No Evil”). Glasper considers himself a dogmatist for the un-old, but veneration was in the air.

I’ve heard the Experiment mail in performances before, playing as if it’s enough to let the grooves handle themselves. Not this time. A Shorter-like contrarianism colored more than the tribute medley; it held through the set’s closer, a climactic “All Matter.” Singing through a battery of effects, Casey Benjamin chopped and bantered with the melody, cutting it into rhythmic fractures and declining to piece it into a steady flow. He and Glasper made intermittent eye contact, and laughed out loud-but the audience was in on the joke too. Toward the end of the song, Benjamin roused the packed audience with a soprano saxophone solo that thrilled because it felt fresh, not just modern.

The trumpeter Terence Blanchard offered a different kind of tribute to Shorter, also part literal and part implicit. A 50-something icon of jazz stewardship, Blanchard has one of the strongest working bands in the business that features four younger musicians on the rise. He played two excellent songs from his strong new record, then settled into a stippled “Autumn Leaves” that drew links back to Shorter’s stint with the Miles Davis Quintet (their Live at the Plugged Nickel recordings in particular), connected that with Wynton Marsalis’ time-shifting rendition on Marsalis Standard Time, Vol. 1, and joined up-largely thanks to Kendrick Scott’s thorough concept on drums-with today. Then Herbie Hancock came onstage to join the band on Shorter’s “Footprints,” and he got a standing ovation before he sat down, just for raising a smile.

That’s what Newport felt like this year: convivial, triumphant, self-justified. Over the past few decades the festival has been through its share of sales, buybacks, relocations and restructurings. It’s operating on a nonprofit model now, and seems to have found equilibrium. (Neither day sold out, but attendance was healthy, with 7,500 festivalgoers on Saturday and 6,200 on Sunday, according to organizers.) If Newport has the cachet to throw Wayne Shorter an 80th birthday party for the ages on day one, it’s also earned the right to move about pretty freely, organizing its second day with only a few loose threads binding it and at least a side-order of experimentalism.

This year there weren’t any major returns from obscurity or big unlikely pairings-common strategies for reenergizing an art form that’s obsessed with its own antiquity. Mostly what you got was strong music from the biggest names in the business, near-perfect start times for all the sets, and excellent sound. It was all very sympathetic, and manageable. It allowed you to have some fun with the festival’s environs, a verdant peninsula slicing into Narragansett Bay.

Unless you had a car, you most likely got to the festival via ferry, and on the way, you could rent a beach chair for a decent rate. At the Quad Stage, on an elevated lawn at the center of the festival grounds, you didn’t need it: If you missed out on a plastic chair under the big tent, you could happily lie on the grass and soak up sunlight. (After a damp start to day one, the second half was nothing but balmy.) Or you could wander out onto the docks beyond the Fort Stage-the festival’s primary venue-and sip a glass of wine or beer while the sound echoed off the water from a thousand feet away. And when certain shows at the Fort Stage got going, you could make your way to the right side of the stage, where a loose assembly of dancers staked out territory.

The bassist Marcus Miller closed the first day with a stunning set, which began genial and magnanimous: It was music made for the end of a day at the shore. (If the festival wasn’t serving margaritas, or any hard liquor, you could at least sip on this smooth concoction of jazz-funk.) But the music turned trenchant and deep-dug with “Dr. Jekyll and Mr. Hyde,” bringing hundreds of new dancers to their feet, and took things up a level at the end with “Gorée,” a stirring meditation on the slave trade and the black experience thereafter.

The young pianist and melodica enthusiast Jonathan Batiste presented his own sort of message, one that’s delivered straight from his hometown of New Orleans and sees jazz as an open circuit of interaction. With his Stay Human band, he moved from a walloping original called “Red Beans”-all post-Monk modernity and full-throttle swing-to renditions of Crescent City staples: “The Entertainer” and “St. James Infirmary” and “On the Sunny Side of the Street.” Just before lighting into another original, the ode to percussion titled “Floor Tom,” he admonished an already charmed crowd, “If you have a key, some loose change, a bottle-that’s your drum.”

Esperanza Spalding’s set on the first day, with her 12-piece Radio Music Society band, had its sights set on a similar sort of inclusion, but it didn’t take off. She sang out a birthday greeting to Shorter, and played her rendition of his “Endangered Species”; it combines straight-ahead improvising, ’80s soul influence and the overall standard of knotted logic and surprise that Shorter laid down. But by now, after a year on the road, her group ought to be tighter-it has to, in order to execute this stuff, in fact. The audience should feed off the sense of joy, not feel as if it’s being offered to them. People weren’t much dancing to this music, which seemed to be a big part of the point.

And about that little serving of experimentalism. It wasn’t terribly bold: With a “global asset management” company sponsorship and an international consumer base, the festival is out to prove something about jazz as an asset to major markets. It doesn’t have the time to be pushing every vanguard, especially those with provenance in Brooklyn or Downtown Manhattan. But you were glad for what you got. Bringing Steve Coleman, the iconoclastic saxophonist who’s railed for an inclusive form of avant-garde jazz since the 1970s, could have felt like a conciliatory gesture, a bit like holding a festival in 1978 and letting Ornette Coleman work as a proxy for the entire Loft scene. But giving Steve Coleman the festival’s longest slot-a two-hour, three-band show at the festival’s intimate Harbor Stage-paid off. He started with a suite for the classical Talea Ensemble that worked in Anthony Braxton’s vein, and had its own earthy pulse. A duo with the pianist David Bryant, each player at once floating freely and making contact, flowed gradually into a performance by Coleman’s Five Elements band, corpulent kinetics edging out cerebral concerns.

And thankfully, he wasn’t the only one playing music headed for the fringe. Some of the unlikelier delights skewed young and international: the trumpeter Amir ElSaffar, who let modern jazz technique work its loose assignments on Iraqi music; the guitarist Rez Abbasi, who kept both Brooklyn and his native Pakistan in mind while working through a set of original compositions; and Edmar Castañeda, who made the strings of his harp into a percussion instrument as he fiddled with Afro-Colombian principles.

Latin beats also provided some of the most familiar and largest-scale moments of this year’s festival-especially on the second day, when they formed a sort of celebratory through-line for the acts on the main stage. There was the Latin jazz-rock of Chick Corea’s superb new band, the Vigil, and the classical-infused work of Paquito D’Rivera’s Dizzy Gillespie Big Band.

Things hit a cathartic peak late in the afternoon, when Eddie Palmieri’s 17-piece Salsa Orchestra offered up a version of “Azúcar Pa’ Ti” that played to its own strengths: vast waves of entwined rhythm from an array of Afro-Cuban percussionists, and cacophonous harmony that Palmieri wrested from his piano. A groove that first hit the radio over 50 years ago-just a few years after the festival was established-felt new as it gusted its way through the bodies, across the fairground, and into the bay.

“It’s time to imagine a place where we can come together,” Danilo Pérez said from the hallowed stage of Washington, D.C.’s historic Sixth & I … END_OF_DOCUMENT_TOKEN_TO_BE_REPLACED

At the Zeiders American Dream Theater in Virginia Beach, Va., between April 8 and 10, the Vocal Jazz Summit convened in person for the first … END_OF_DOCUMENT_TOKEN_TO_BE_REPLACED

The Big Ears Festival returned to Knoxville in a big way in late March, drawing an estimated 30,000 music enthusiasts from across the U.S. and … END_OF_DOCUMENT_TOKEN_TO_BE_REPLACED

Let’s get this out of the way: The Savannah Music Festival is not a jazz festival. Held over the course of 17 days in late … END_OF_DOCUMENT_TOKEN_TO_BE_REPLACED