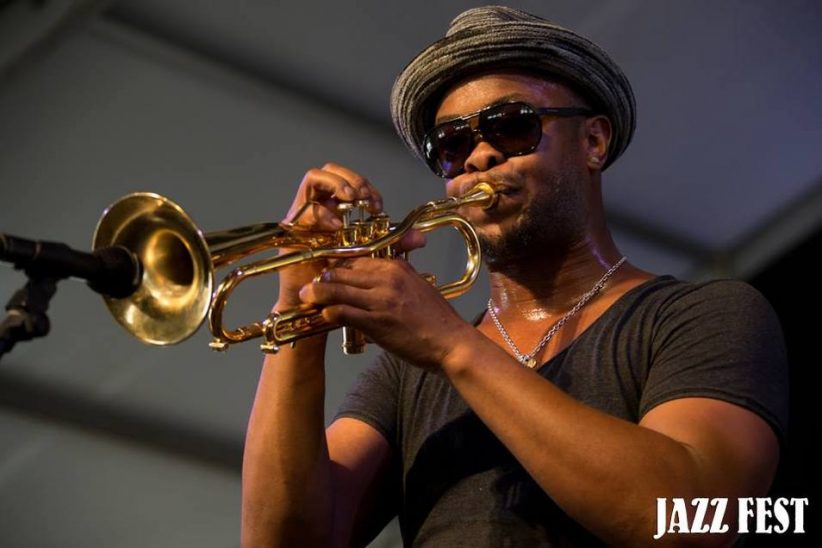 The fearsome weather forecasts that anticipated the first weekend of this year’s New Orleans Jazz & Heritage Festival, which began at the New Orleans Fair Grounds on Friday, only became a problem around 6 p.m. Something was up when Jimmie Vaughan and his Tilt-A-Whirl Band-a great, swinging unit based in ’40s- and ’50s-era jump-blues-seemed to bring “Texas Flood” to an early close. Then the announcement came: Due to public-safety concerns over fast-approaching inclement weather, the festival would end then, at around 6 p.m. So much for catching at least half of a headlining set by Snarky Puppy, the young fusion torch-carriers I was hoping to wrap my day with. Before that, though, the building rain clouds kept the sun at bay and temperatures down. The crowds were healthy but not overwhelming; Jazzfest’s opening day in 2015 was a very pleasant place to be.

Upon a walkthrough, Jazzfest is a kind of tapestry of American roots music and Louisiana folk culture. But it can also be deconstructed, which is to say it functions like several independent festivals all firing at once. Yesterday, you could have taken in a fine modern blues festival at the overly loud Blues Tent, featuring artists like Kenny Neal, an excellent guitarist and a singer who strives for gospel depth, and Jonathan “Boogie” Long, a fiery, rock-leaning guitar slinger in the Walter Trout mold. At the Jazz Tent, the programming stayed in New Orleans, aside from Snarky Puppy. I arrived in time to hear saxophonist Kidd Jordan, in a band with William Parker, raise the dead and inspire tourist walkouts with incendiary free improv. Original-generation free jazz, that is to say the ’60s, is like bebop or early jazz or any other enduring tradition in that, when you hear it done properly, its authenticity is startling and beyond argument. Throughout the set, Jordan struck that old-school out-jazz balance of melee and Trane-invoking melody.

The trumpeter Maurice “Mobetta” Brown and his quintet impressed, combining no-nonsense chops with a slick, au courant rhythmic sense infused with neo-soul and hip-hop. Brown’s composing seemed geared toward entertainment; his themes were often earworms. Nicholas Payton, who has made a habit of showcasing his trio at his Jazzfest bookings, was also a font of memorable melody, in a band with the tremendously strong rhythm section of bassist Vicente Archer and drummer Bill Stewart. Payton has put a lot of time into his keys-plus-trumpet concept at this point, and it’s working for him. On Rhodes and organ he deftly utilized the comforts of the blues and groove, and when he played his horn he reminded you of his New Orleans history and his place in its trumpet legacy. One important piece of that legacy was missing from this year’s fest-Lionel Ferbos, who died last summer at the record-setting age of 103. In the Peoples Health Economy Hall Tent, where the two-beat trad-jazz rules, Lars Edegran and his New Orleans Ragtime Orchestra played some of Ferbos’ favorite tunes, like “Some of These Days.”

Home-page photo of Kidd Jordan, and photo of Maurice Brown, by Douglas Mason.

The 2022 Newport Jazz Festival’s three days of sunshine were bracketed, more or less, by a pair of all-star ensemble jams that included Christian McBride. … END_OF_DOCUMENT_TOKEN_TO_BE_REPLACED

In its first full edition since the onset of the pandemic, and with a new director of programming, the Festival International de Jazz de Montréal … END_OF_DOCUMENT_TOKEN_TO_BE_REPLACED

Among the many physical, spiritual, and institutional losses related to the still-ongoing pandemic is that of Los Angeles’ renowned Playboy Jazz Festival (PJF) at the … END_OF_DOCUMENT_TOKEN_TO_BE_REPLACED

It’s difficult to imagine what the stage and the audience would have looked like at Gaillard Center in Charleston, South Carolina, if Rhiannon Giddens’ new … END_OF_DOCUMENT_TOKEN_TO_BE_REPLACED