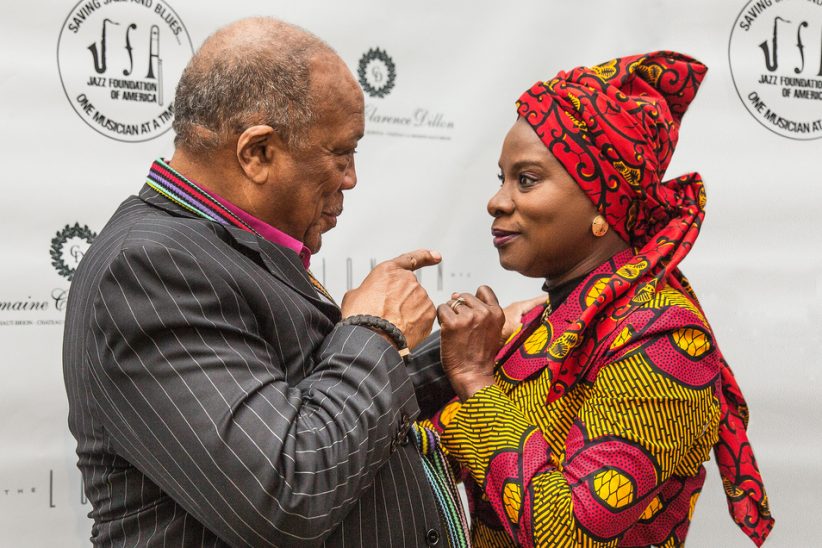 Quincy Jones and Angelique Kidjo prior to "A Great Night in Harlem," NYC 10-14 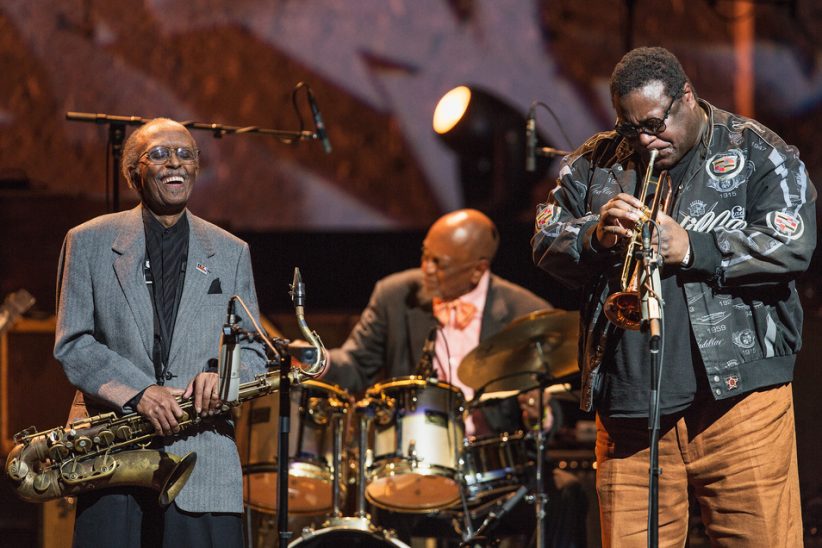 The Roots' Questlove speaks at the Jazz Foundation of America's "Great Day in Harlem" in 2014. 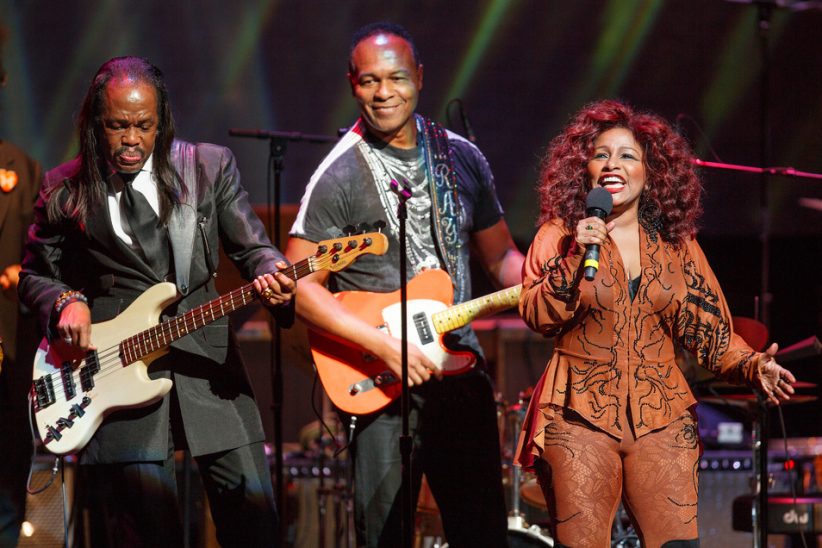 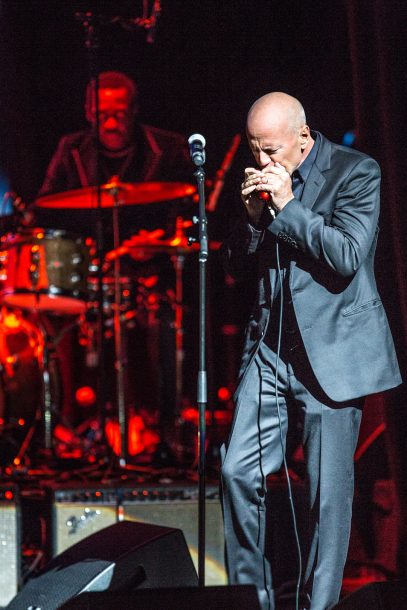 Actor Bruce Willis on harmonica at "A Great Night in Harlem," NYC 10-14 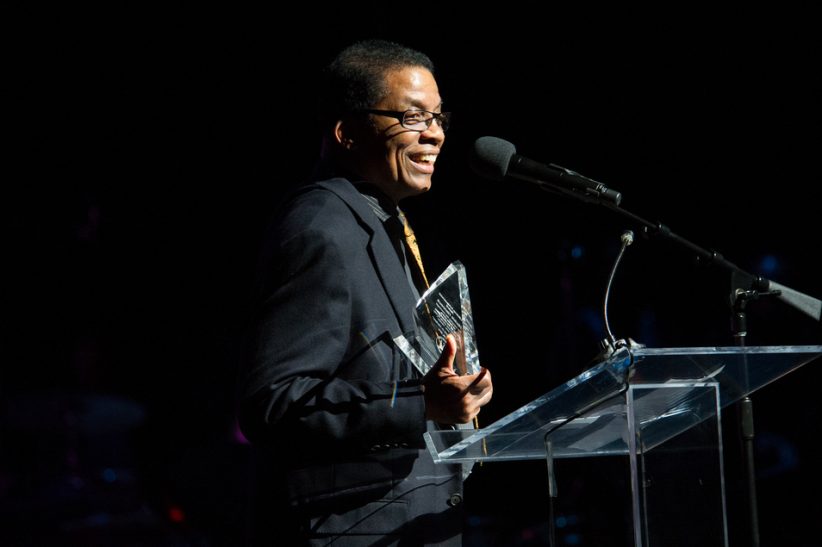 Herbie Hancock receives a lifetime achievement award from the Jazz Foundation of America at "A Great Night in Harlem," NYC 10-14 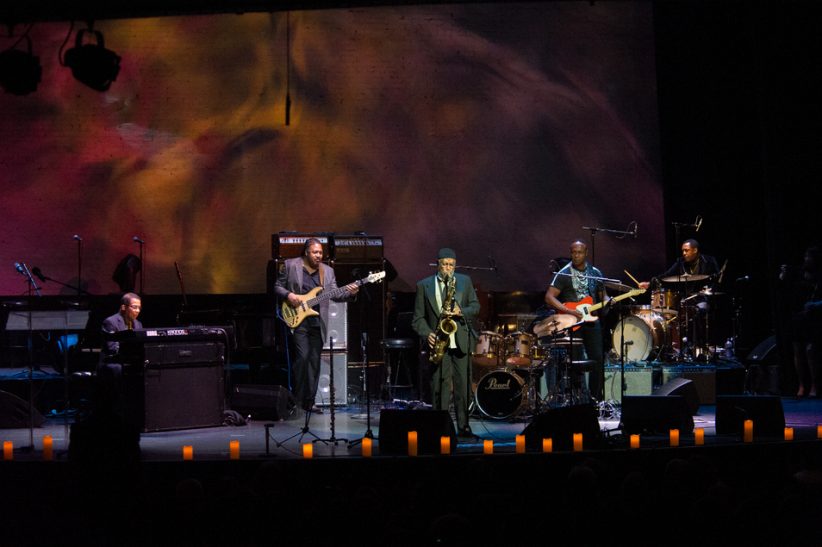 With the proceeds supporting the Jazz Foundation of America’s Jazz Musicians Emergency Fund, “A Great Night in Harlem,” the sold-out benefit concert at the iconic Apollo Theater on Oct. 24, took on an extra layer of greatness. The JFA assists older jazz and blues musicians in need, whether for medical care, housing issues or any number of other crises, making a tangible difference in the lives of people who’ve dedicated themselves to music. If that meant listening to a certain amount of speechifying between sets at the Apollo, no one was complaining.

By the end of the night, although the JFA fell somewhat short of its stated fundraising goal-the JFA says $400,000 is still needed-$1.5 million had been raised. Those funds will go directly toward helping artists. As the popular expression goes, it was all good.

And so was the music. For this 13th edition of “A Great Night in Harlem,” the event’s producers lined up an impressive, diverse stable of performers from within the jazz, R&B and blues communities. From legends with many decades of experience to a pair of promising pianists for whom high school is still a future concern, the entertainment was top-shelf throughout the night.

Multi-artist benefit concerts such as this tend to go long on star power, and there was plenty of it on hand here. For many veteran jazz folks in attendance, the most highly anticipated segment was to be the first-time-in-four-decades reunion of Herbie Hancock’s early 1970s sextet Mwandishi: Hancock on keyboards, Buster Williams on bass, drummer Billy Hart, trumpeter Eddie Henderson, trombonist Julian Priester and multireedist Bennie Maupin. Rather than reprising a number from one of the three albums they released at the time, the group offered its take on “Toys,” from Hancock’s 1968 album Speak Like a Child. The musicians-much older now, of course, but no less adept at finding a deep groove-approached the piece tentatively, and while there were indeed sparks within the various individual solos, the frontline could have been afforded more time in the spotlight. Just as they were finally finding their way as a unit, it seemed, the one-time-only reunion was history.

The following segment-Hancock and Maupin joined by guitarist Ray Parker Jr., bassist James Genus and drummer Steve Jordan-was given over to a performance of “Chameleon,” Hancock’s crossover funk-jazz hit from 1974. With Hancock switching off between piano and a Korg keyboard, and Maupin leaving the signature riff behind to blow seriously seductive circular patterns on sax, the number was fully funky, and more satisfying in the end than Mwandishi.

Those showcases for Hancock-who received a lifetime achievement award during the event-came later in the evening, after an earlier segment in which he, joined by Williams, trumpeter Wallace Roney, saxophonist Jimmy Heath (a day short of his 88th birthday) and drummer Tootie Heath, performed Jimmy’s “Gingerbread Boy.” The ubiquitous keyboardist was also on hand to cheer on the pint-sized 11-year-old Indonesian piano wunderkind Joey Alexander, who told “Mr. Hancock,” to wild cheers, that the latter had inspired him, at age 8, “to dedicate my childhood to jazz.” Alexander then proceeded to perform a solo piano rendition of “‘Round Midnight” that was magnificent not only for the child’s virtuosity-plenty of prodigies have outsized chops-but for the maturity and perception he brought to the Monk standard. It remains to be seen how well Alexander fares in a group situation, whether his skills can carry over to real-world improvisational jazz, but the standing ovation he received was well earned.

Not everything this evening centered on Herbie Hancock and his associates-it only seemed that way at times. There were other tributes-to the late vocalists Jimmy Scott (honored by JFA Vice Chairman Wendy Oxenhorn and Quincy Jones) and Babi Floyd-and awards handed out to medical professionals who’ve donated their time and expertise to the cause.

The music got under way with a brief pre-show solo piano turn by another youngster, 13-year-old keyboardist Matthew Whitaker, and opened officially with the Beninese powerhouse vocalist Angélique Kidjo, who quickly got everyone’s attention with a rousing tribute to Nelson Mandela. The dazzling Cuban pianist Jorge Luis Pacheco, a Montreux Solo Jazz Piano Competition winner, was a revelation, his hands a virtual blur as he led his trio, filled out by bassist Carlos Mena and drummer Ivan Llanes Montejo, through an alternately fiery and ornate display of superior technique.

A couple of other highlights occurred mid-show: first, during a tribute to Earth, Wind and Fire featuring Verdine White, the group’s bassist since its inception, along with Chaka Khan, Jordan, Kidjo, Parker, keyboardist Paul Shaffer, a bevy of hornmen and a pair of backing vocalists. This aggregation performed two of the group’s biggest hits, “That’s the Way of the World” and “Shining Star,” and was introduced by the Roots’ Questlove, who praised founder Maurice White, unable to attend due to health problems. Maurice White’s lifetime achievement award was accepted by brother Verdine, who also gave a moving speech, noting the group’s longevity.

Charles Bradley, an old-school R&B singer in the Wilson Pickett/James Brown/Otis Redding vein, kept the soul fever going with a pair of tunes, and a blues segment featured guitarist-vocalist Susan Tedeschi, joined for one song by actor Bruce Willis on harmonica and vocals.

It’s easy, sometimes, to forget at this sort of event about the cause itself and to just dig the sounds. At “A Great Night in Harlem” we were reminded often about the important, selfless work the Jazz Foundation of America does. We were also reminded that difficult times can come to anyone at any time-including those who make the music we too often take for granted.

“It’s time to imagine a place where we can come together,” Danilo Pérez said from the hallowed stage of Washington, D.C.’s historic Sixth & I … END_OF_DOCUMENT_TOKEN_TO_BE_REPLACED

At the Zeiders American Dream Theater in Virginia Beach, Va., between April 8 and 10, the Vocal Jazz Summit convened in person for the first … END_OF_DOCUMENT_TOKEN_TO_BE_REPLACED

The Big Ears Festival returned to Knoxville in a big way in late March, drawing an estimated 30,000 music enthusiasts from across the U.S. and … END_OF_DOCUMENT_TOKEN_TO_BE_REPLACED

Let’s get this out of the way: The Savannah Music Festival is not a jazz festival. Held over the course of 17 days in late … END_OF_DOCUMENT_TOKEN_TO_BE_REPLACED