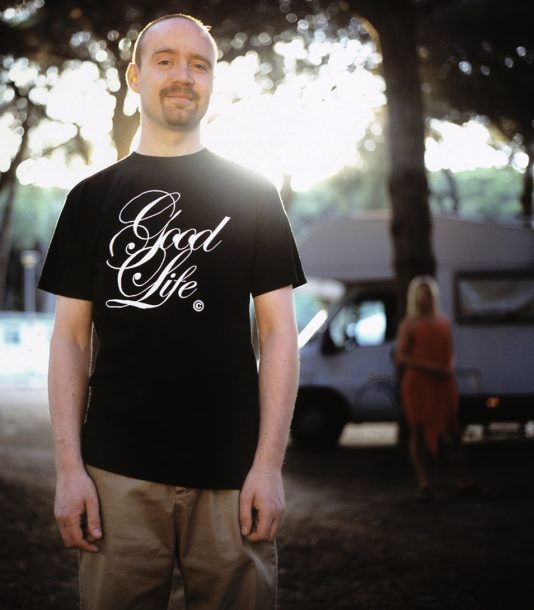 While less known to American audiences, the eccentric and lovable British DJ Mr. Scruff has been something of a minor phenomenon in the U.K. While eluding serious mainstream success since he first purveyed his comedic, jazz-infused beats back in the mid-’90s, the Manchester-based DJ has successfully amassed hordes of devoted fans and left an abundance of brilliantly wayward 12″s in his wake. Above all, as demonstrated with aplomb at his latest gig in London, he puts on a great show.

Scruff, aka Andy Carthy, is that rare breed of music alchemist-genre-defying, irreverent and fun. His material is a fusion of wobbly lounge-jazz, swing, Afro-funk, disco, big brass and big bass, with samples pillaged from second-hand record stores worldwide. Accompanied by his DIY, loose-lined animations on giant screens, he prides himself on playing marathon sets that delve deep into his bubbling musical cauldron.

His latest epic set took place in the suitably grandiose venue of KoKo in Camden, north London, a cavernous old theatre, steeped with blood-red walls and an Olympic-size mirror ball suspended from its high ceilings. Scruff eased the punters in with reggae, dub, soul, Motown and jazz before pushing the tempo with more disco-oriented grooves once the venue reached full capacity. By then, the heaving mass of revelers was moving and grooving in time to the sound systems’s funky bass lines, layered with smooth, soulful female vocals, with the occasional souped-up, Prohibition-era swing thrown in. Two big screens either side of the DJ booth showed off Scruff’s latest animations, drawn by his own hand: weird potato-like creatures playing French horns, tucking into apple pies and bouncing along to the relentless beat. Behind the dance floor lay a pop-up teashop selling Mr. Scruff’s own brand, freshly-brewed tea. Wholesome or what?

Approximately three hours in, though, the set begins to drag. The infectious, rubbery funk has ebbed, replaced instead by empty, bassless house music better suited to a yuppie wine bar. It feels lazy and lackluster, with no rise, no fall, no journey. Yet by the early hours, the vinyl decks are reinvigorated by some heavy-duty Latino sounds as hip-swiveling salsa takes over, punctuated by powerful trumpet blasts, propelled by Cuban percussion. By now, the chest-pummeling bass is inescapable, pumping fully palpable vibrations through the audience. As the marathon set approaches its end, Scruff classics such as the bouncy, hip-hoppy “Vibrate,” the wacky “Fish” and the swinging “Get a Move On” are thrown into mix. There’s also a new track labeled simply as “new scruff tune” on the screens, met with riotous reception as the projectors tell the crowd “incoming bass alert” and “get your knees up.”

Those on the dance floor are impossible to pigeonhole: a city banker over here, a rave fanatic there, jazz fans on the front row, all dancing to Scruff’s long, unpredictable and unpretentious set with genuine joy. Scruff, dressed in t-shirt and jeans, stoically keeps going to the end. And while he remains mostly deadpan throughout, his eclectic range of sounds are definitely best presented with a goofy grin than a smug smirk.

Among the many physical, spiritual, and institutional losses related to the still-ongoing pandemic is that of Los Angeles’ renowned Playboy Jazz Festival (PJF) at the … END_OF_DOCUMENT_TOKEN_TO_BE_REPLACED

It’s difficult to imagine what the stage and the audience would have looked like at Gaillard Center in Charleston, South Carolina, if Rhiannon Giddens’ new … END_OF_DOCUMENT_TOKEN_TO_BE_REPLACED

“It’s time to imagine a place where we can come together,” Danilo Pérez said from the hallowed stage of Washington, D.C.’s historic Sixth & I … END_OF_DOCUMENT_TOKEN_TO_BE_REPLACED

At the Zeiders American Dream Theater in Virginia Beach, Va., between April 8 and 10, the Vocal Jazz Summit convened in person for the first … END_OF_DOCUMENT_TOKEN_TO_BE_REPLACED