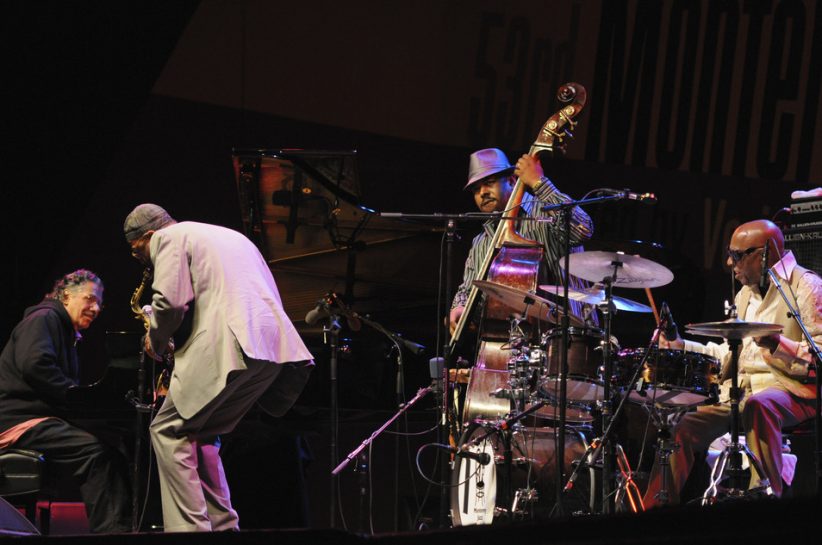 Among its many other virtues, the Monterey Jazz Festival, the world’s oldest continuous jazz festival, has come to a paragon of reassurance, balance and doses of adventure. There may be trouble ahead and dire inklings in the jazz world, from the meltdown of the recording industry, the meager public awareness and grim career opportunities for emerging jazz musicians. But for one September weekend at the Monterey County Fairgrounds, we encounter positive signs that the supposed cultural endangered species status is greatly exaggerated.

As further testament to the festival’s strength of character and vision, those encouraging qualities prevail even when a given festival’s program is less than stellar, as was the case this year, in the 53rd annual festival. At least in terms of its arena main stage roster, the 2010 festival’s fare failed to ignite much intrigue or sense of artistic vision until livewire veteran Ahmad Jamal arrived as the final act on Sunday evening, handily stealing the show with his trademark blend of self-defined standards and dynamics-sculpting before our ears.

Things change and stay the same in Monterey. A comforting regularity prevails, with the Friday night through Sunday night schedule, with music on multiple stages all over the expansive fairgrounds, and panel discussions and public interviews in the mix, along with a robust educational component which carries on year-round. BBQ beckons, along with other smells and tastebud enticements, and hip goods and services are offered in a vendors area, completing the picture of a self-contained, time-released village.

Artistic director Tim Jackson continues to perform a model juggling act, in terms of trying to appease and appeal to the broadly diverse factions of fans who attend the festival, from old hard-liners and party-seekers in the arena to young listeners in need of a pathway into this great music. He also makes sure to address important and fresh jazz from the more creative, left-end and potentially more esoteric corners. From that camp this year came the highlights of the entire festival, even if in smaller venues: Rudresh Manhanthappa’s Indo-Pak Coalition put forth an exciting new indo-jazz sound with guitarist Rez Abbasi and tabla/hand drummer Dan Weiss; and the captivating and deeply musical young vocalist Gretchen Parlato, with pianist Taylor Eigsti and drummer Kendrick Scott in tow, bedazzled, as expected. Her luminous version of Herbie Hancock’s “Butterfly,” for one, was an apex moment of the weekend.

For this listener’s money, the greatest set of the fest came from Chris Potter Underground (with thoughtful dynamo Craig Taborn on Fender Rhodes, Adam Rogers on guitar and Nate Smith on drums) sounded better than ever, all in the cool al fresco outpost of the garden stage late on Saturday night. On original tunes such as “Ultra-Hang” and “Good Hope,” the band demonstrated a new level of collective energy, new math funk, personalized identity, and freedom in the cracks. Potter’s band is fast rising in importance on the jazz scene, and potent expressive gusto.

Notable parties and celebrated figures can always be found on the fairground property. George Wein, that master festival mold-maker and creator of the Newport Jazz Festival among countless others, was a guest of honor out west this year, speaking and playing, and festival regular (and nearby neighbor) Clint “get off my lawn” Eastwood could be found lurking and listening intently, as if he was just a mortal like the rest of us.

Friday in the arena, Roy Hargrove kicked things off with his big band, a mode he’s still getting the hang of, in a set highlighted by the beauteous tones of Roberta Gambarini. On her slow and luscious “Every Time We Say Goodbye,” Gambarini proved yet again why she’s one of our finest “mainstream” jazz singers. Later arena acts included a return visit from a Monterey favorite, Dianne Reeves, and Chick Corea’s sporting and muscularly swinging cross-generational Freedom Band (with Roy Haynes, Christian McBride, and Kenny Garrett.

Harry Connick, Jr. arrived on Sunday night and did his level best to fit into the jazz festival context, but somehow fell short. Whereas Connick, Jr. is a reasonable crooner and a more than reasonable pianist-although in styles from before he was born-his most important role in a jazz context is that of kindly “gateway drug” artist, capable of luring unsuspecting general listeners into jazz.

One of Monterey’s great calling cards and distinguishing points as a festival entity is its commissioning program, resulting in a growing body of festival-spawned works, some more impressive than others. To that end, the choice of commissioning Billy Childs this year had a sentimental and historical relevance, in that he was the first recipient of the program when Jackson revived it back in 1994. This year, Childs wrote a work for his jazz quartet and the Kronos String Quartet, a valiant if ultimately strained attempt in the challenging bridging act of jazz and classical manners. Even if the piece didn’t quite come together, its sense of adventure was admirable. That quality reminded us of last year’s patently adventurous commission, Jason Moran’s “Feedback,” based on samples of Jimi Hendrix’s guitar feedback from this very stage, during the 1967 Monterey Pop Festival. The crowd and critical feedback, not surprisingly, was decidedly mixed.

Perhaps fittingly, the trans-generational and torch-passing themes accounted for the literal finale of the weekend, late on Sunday evening. Over at the Night Club/Bill Berry Stage, Javon Jackson led the charge of “Swiss Movement Revisited,” working with the seasoned Les McCann on a redux of McCann’s earlier landmark album, and another keyboard legend, organist Dr. Lonnie Smith sat in. it was a retro-meets

Meanwhile, across the lawn at Dizzy’s Den, Haynes was holding forth with his Fountain of Youth band, marshalling players half or a third the leader’s age (and with McBride sitting in for a tune). Haynes dispensed his unerring swing foundation and issued the weekend’s freest, funniest patter at the microphone, and generally comporting himself like the hippest octogenarian in jazz. On a more poignant note, Haynes spoke about the passing of his wife in 1979, the day he played at Monterey with Dizzy Gillespie.

In a way, that easy generational accord nicely represents a core reality at the Monterey Jazz Festival. Once again, the 2010 festival brought to this blissfully rambling compound jazz musicians from high school to great vet legends, and all manner of players in-between. You wouldn’t even guess that jazz was in trouble, at least for a loveably lost weekend.

Among the many physical, spiritual, and institutional losses related to the still-ongoing pandemic is that of Los Angeles’ renowned Playboy Jazz Festival (PJF) at the … END_OF_DOCUMENT_TOKEN_TO_BE_REPLACED

It’s difficult to imagine what the stage and the audience would have looked like at Gaillard Center in Charleston, South Carolina, if Rhiannon Giddens’ new … END_OF_DOCUMENT_TOKEN_TO_BE_REPLACED

“It’s time to imagine a place where we can come together,” Danilo Pérez said from the hallowed stage of Washington, D.C.’s historic Sixth & I … END_OF_DOCUMENT_TOKEN_TO_BE_REPLACED

At the Zeiders American Dream Theater in Virginia Beach, Va., between April 8 and 10, the Vocal Jazz Summit convened in person for the first … END_OF_DOCUMENT_TOKEN_TO_BE_REPLACED