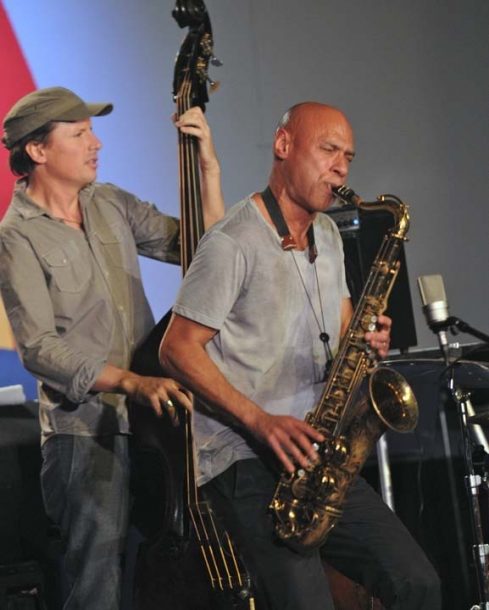 A crowning moment of the recent 54th annual Monterey Jazz Festival came at the very end, as the towering titan that is Sonny Rollins capped off a particularly on, 100-minute set with the righteous remark, “See you next time. Long live Monterey.” Hear, hear.

There is something about Monterey that brings out Rollins’ fire and stamina. It may have partly to do with the emotional voltage and legacy of being at this great festival that, as director Tim Jackson pointed out in his introduction, featured Rollins in its very first year, 1958. Rollins’ Monterey sets have tended to be fervent and bountiful by his standards, and this was no exception. His solos roared and explored, latching onto his famously clipped melodic motifs and venturing outward into the jazz cosmology of his own devising, and back inward.

Jazz, as a variegated whole, is well-served at the three night/two day festival held at the Monterey Fairgrounds each September. This is a full-service, style-inclusive festival-still the best in the west and probably the best American festival overall, thanks to the inspired direction of Jackson, celebrating 20 years at the helm this year. Jackson stepped in at a time of stagnation, when founder Jimmy Lyons was losing steam and losing touch with the state of jazz, and the current director again worked the event into the upper echelon of the world’s jazz festival circuit.

Certain themes emerged this year, under the intentionally diverse, multi-idiom umbrella of the festival program scheme. Strong female pianists were among the high profile acts this year. On Friday night, Hiromi, the virtuosic and dynamic-sometimes to a fault-pianist, burst forth with her fusion-fueled sound, with a crowd-goosing sound ably amped up by the great Anthony Jackson on six-string electric bass and Simon Phillips, on an extra-jumbo drum kit.

One could drift from Hiromi’s main arena set and settle into the vastly more sophisticated piano trio context led by the intelligent, tasteful and technically adroit young pianist Helen Sung in the Coffeehouse Gallery venue.

Back on the arena stage, a festival spotlight took place with the arrival of pianist Geri Allen’s band Timeline, a set that nicely illustrated Allen’s unique variation on the piano-led trio theme. She manages to incorporate elements of her strong McCoy Tyner influence, intricate odd meter asides and Afro-jazz grooves on her own terms, and an openness to ideas left of normal.

Ironically, a recent “new” idea she has embraced and given props to is also an old one, as she pointed out onstage, with the inclusion of tap dancer Maurice Chestnut, whose dizzyingly nimble footwork demands attention even as he finds seamless ways to integrate and dialogue with the ensemble.

For this occasion, Chestnut had a special star outing, as the featured performer on a piece called ” The Dazzler,” a mini-suite-like tribute to Sammy Davis Jr., and the product of this year’s festival commission.

Terrence Blanchard had the perhaps unenviable task of “playing the role” of late, great jazz masters Dizzy Gillespie and Miles Davis. Late on Friday night, Poncho Sanchez and band led the Latin-jazz charge with their usual tightness and flair, this time packaged in a conceptual tribute to the work of Cuban percussionist Chano Pozo and Dizzy, timed with the release of Sanchez’ new album. Blanchard shone brightly, and coolly channeled Dizzy rather than mimicking him.

That strategy also held him in good expressive stead on Sunday evening, when he took on the Miles guise in the glowing, Vince Mendoza-led big band program “Miles Davis/Gil Evans: Still Ahead,” examining and exhuming the classic Gil/Miles collaborations of old.

Meanwhile, over in the Night Club/Bill Berry Stage venue, bassist Scott Colley’s current trio showed itself to be a luminous thing, a chordless meeting-of-masters with saxophonist Chris Potter (whose set with his band Underground was one of the 2010 highlights) and drummer Antonio Sanchez. On themes by Colley, and more, the trio, as individuals and as a collective voice, coaxed a potent and alluring sound we want to hear more of.

In the arena, the quartet known as James Farm was doing its best to convince us that the band’s collective identity is a lovesome and holistic thing, but the jury is still out. Without question, the individual parts are among the finest players in jazz, with tenor saxist Joshua Redman up front, pianist Aaron Parks (whose solos were the most compelling in this set), drummer of choice Eric Harland and bassist Matt Penman. But ensemble empathy, as heard on their new Nonesuch album and live, seems a scattered affair.

Other, more broadly entertaining fare found its way into the main arena, as well. For John Pizzarelli, joined by his wife Jessica Molaskey (but, unfortunately, not his father, Bucky, as planned), shtick met swing, hot-rodded supper club niceties and some sterling old school guitar playing. Herbie Hancock, in his current populist phase, is a feel-good master in his own way, and reliably brings on the friendly heat and greatest hits in his shows, which tend to open with the feisty fine “Actual Proof” and get friendlier and more fun as they go.

Take away the main attractions, the arena-worthy moments, and some of the best Monterey moments arrive in smaller packages bolstered by delight and discovery. Steve Coleman’s Five Elements played to one of the less-packed audiences, over on the Garden Stage just before the Rollins finale, but his hour in the spotlight, in a taut, empathetic quartet featuring drummer Jim Black, bassist Matt Brewer and fine, probing trumpeter Jonathan Finlayson, was one of the festival’s most musically challenging offerings, off on the fringes.

In another fringe zone entirely, and in another venue, the Coffee Gallery, the great, underrated jazz piano master Bill Carrothers showed us how it’s done. A compelling jazz player with more traction in Europe than America, the Michigan-based Carrothers had ideal, cool-then-hot allies in Monterey, in longtime drummer collaborator Bill Stewart and bassist Drew Gress, but it was the pianist himself-hunched over the keyboard, sans shoes and fully mindful-who kept luring and satisfying the attentive ears in the room. Carrothers poeticized athleticism in an up bopper like Clifford Brown’s “Gerkin for Perkin,” but ambled down deep in slow and medium-heat mode, always twisting up chordal or melodic shapes and bending rules to suit his restless muse, but never to excess.

‘Round midnight on Saturday, before a half-full room of rapt admirers, Carrothers wrapped “In the Wee Small Hours of the Morning” in a new, highly personalized harmonic vocabulary, with emotional depth and curiosity very much in tow. In that wee moment before a small gathering, Carrothers came close to stealing the show at this year’s festival.

For an extensive photo gallery from the 2011 Monterey Jazz Festival, go here.

Among the many physical, spiritual, and institutional losses related to the still-ongoing pandemic is that of Los Angeles’ renowned Playboy Jazz Festival (PJF) at the … END_OF_DOCUMENT_TOKEN_TO_BE_REPLACED

It’s difficult to imagine what the stage and the audience would have looked like at Gaillard Center in Charleston, South Carolina, if Rhiannon Giddens’ new … END_OF_DOCUMENT_TOKEN_TO_BE_REPLACED

“It’s time to imagine a place where we can come together,” Danilo Pérez said from the hallowed stage of Washington, D.C.’s historic Sixth & I … END_OF_DOCUMENT_TOKEN_TO_BE_REPLACED

At the Zeiders American Dream Theater in Virginia Beach, Va., between April 8 and 10, the Vocal Jazz Summit convened in person for the first … END_OF_DOCUMENT_TOKEN_TO_BE_REPLACED